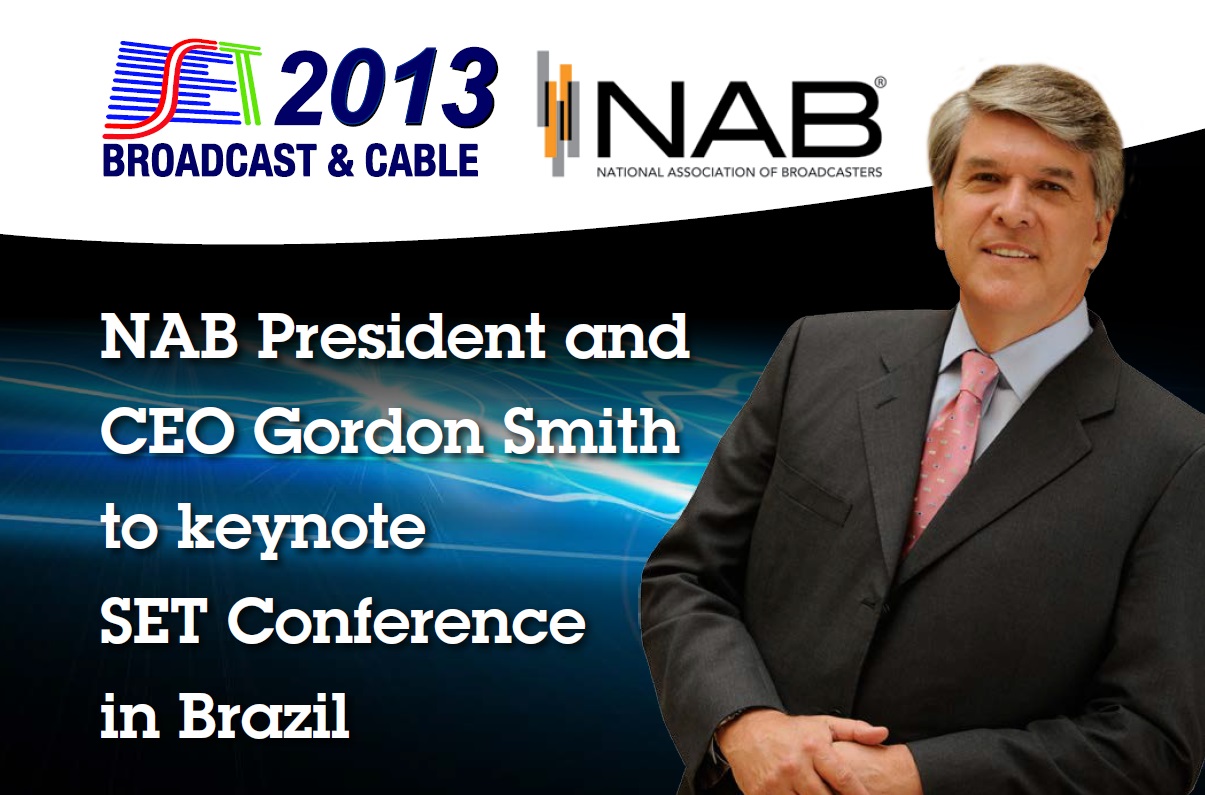 The Brazilian Society of Television Engineering (SET) and the National Association of Broadcasters (NAB) announced today that NAB President and CEO Gordon Smith will deliver
the keynote address at the opening ceremony of SET 2013, on August 20, in Sao Paulo, Brazil.
SET 2013, SETs annual conference, is held concurrently with Broadcast & Cable, an extensive equipment and technology show, August 19-22. This annual event is the largest and most significant convention for broadcast and digital media professionals in South America attracting more than 10,000 attendees.
NAB organizes the NAB Show, held in Las Vegas each year in April. The convention, April 5-10, 2014, is the worlds largest electronic media show covering filmed entertainment and the development, management and delivery of content across all mediums. With more than 93,000 attendees from 155 countries and 1,500+ exhibitors, NAB Show is a marketplace and educational forum for digital media and entertainment professionals.
SET is very excited to have Gordon Smith speak at this years conference. NAB and SET have, as a common goal, the promotion of innovation and education in the broadcast industry, said SET president, Mr. Olimpio Franco. Brazil is the largest international delegation at the NAB Show, greatly because of the longstanding relationship between SET and NAB and our mutual desire to provide more global business opportunities for our members.
Gordon Smith joined the NAB as president and CEO in November 2009. He had previously served as a two-term U.S. senator from the state of Oregon.
In his remarks, Smith will share how NABs advocacy efforts on behalf of U.S. radio and television stations enable broadcasters to fulfill their mission of preserving critical values that are the foundation of democratic ideals. He will also address how advancing broadcast technology and promoting stations interests in policy issues such as spectrum incentive auctions, supports stations commitment to serving their listeners and viewers.

About NAB
The National Association of Broadcasters is the premier advocacy association for Americas broadcasters. Under Smiths leadership, NAB advances radio and television interests in U.S. legislative, regulatory and public affairs.
Through advocacy, education and innovation, NAB enables broadcasters to best serve their communities, strengthen their businesses and seize new opportunities in the digital age.

About SET
The Brazilian Society of Television Engineering is a non-profit technical society, formed by technology and operations professionals, which aims to develop technical knowledge in the complete chain of electronic media, from production to delivery.