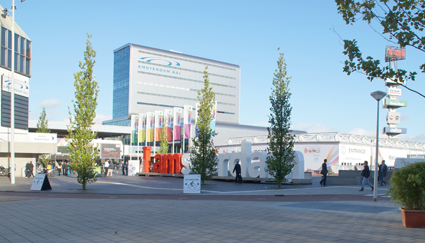 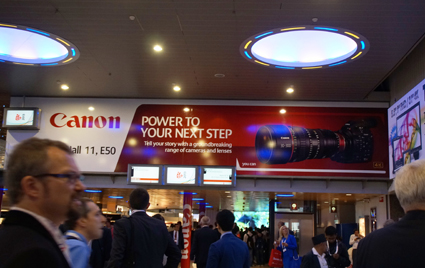 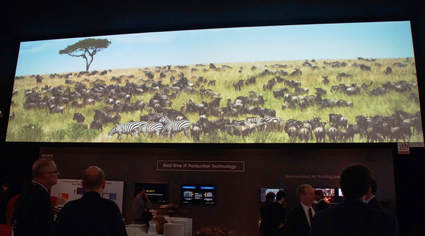 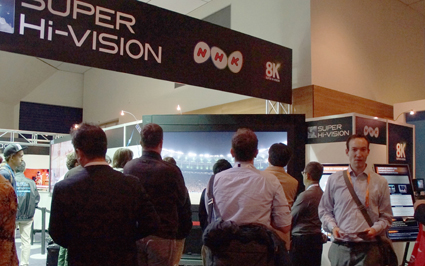 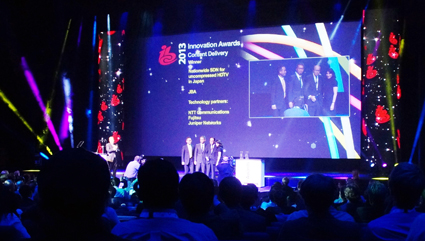 IBC 2013 was held in Amsterdam, Netherlands from September 13th through the 17th, when the feeling of late autumn is in the air in Japan. Separating the content into two parts, Part 1 and Part 2, I would like to introduce this year's conference with an overview and present the overall status of the proceedings, technical trends, and the exhibition material shown by each company.
A basic overview of the history of the IBC: The inaugural conference was held in London in 1967, after which, due to various circumstances, it moved to other locations, including Brighton, England, finally arriving in Amsterdam in 1992. The conference has a long tradition, marking the 45th anniversary of its founding this year, and has grown into one of the three major broadcasting equipment exhibitions, along with the American NAB and the Japanese Inter BEE.

Amsterdam is famous as a tourist destination for its many sights, including its windmills, canals, and display windows. Deeply connected with Japan since ages past, the capital of the Netherlands, Amsterdam, is a metropolis with a population of 740,000 (unexpectedly small by Japanese standards). To this day, the city retains traces of its medieval past, with the old town lined with redbrick delta roof houses, creating scenery all around that would make for a great painting or photo. The IBC this year was held at a modern and spacious convention center built in the RAI area, which is located a calm 30-minute ride from the old town by the fashionably designed modern tramcar (streetcar) via the refined and subtle central station that is said to have been used as the model for Tokyo Station.

This year's IBC was held amid the cloudy world economic state and the unstable political situations in Syria and Egypt, along with the Japanese economic situation, which is somewhat improved over last year, but whose future path is still unclear. However, the conference itself was a bustling affair, with 52,794 visitors, 2,000 more than last year, and over 1,400 companies and groups holding exhibits. Judging from a quick walk around of the center, the exhibitions from Japan, which has contributed greatly to the development of the world's broadcasting technologies for many years, had decreased somewhat in number, and the scale of those present had become somewhat smaller. I also felt that it was not only those involved with the exhibits, but visitors and media personnel from Japan that had decreased in number as well.

The convention center, as shown in Photo 1, has a tower with the RAI symbol and tent-style display area on its right side, with the large "I Amsterdam" monument set to the side, the sole high-rise building of the center at its front. It can be seen in part to the left, but most of the display area and conference arena extends to the back, so vast that you can't see the entire center at once. The conference center and equipment display area are unconsolidated like the Makuhari Messe or the NAB center, with 14 small-to-middle-scale halls intricately woven together. Viewing booths of interest and participating in every event along with the conference in a limited amount of time requires a tough body and spirit, as well as perseverance.
The main entrance used for registration is as spacious as a luxury hotel lobby, and on a conspicuous wall hangs a large Canon sign, a leading company to this day, as if to show off the momentum of Japanese corporations (Photo 2). On the other hand, Sony, which has led the development of the world's broadcasting technology for many years, proudly displayed in 4k video the health of Japanese technological prowess under the "Beyond Definition" theme on its huge screen in the largest space of the display area, spanning the entirety of the second floor of Hall 12 within the high-rise building (Photo 3).

The world has now eclipsed the digitalization and HDTV age, approaching the post-digital age through rapid progress toward the cooperation and fusion of broadcasting with data communication, while the needs and surroundings of broadcast viewers and data users diversify together with the spread of smartphone and tablet devices. In terms of the general technical trends seen at this year's IBC, exhibition material that reflected the roles and circumstances of broadcasting and video media, currently undergoing great change, stood out. In the world of video in particular, material related to 3D video, widespread during its short boom, had mostly disappeared. On the other hand, there was an array of exhibition material related to data use and efficient, high-quality content creation geared toward the post-HDTV age, with 4K- and 8K-related displays and presentations focused on consumer needs regarding ultra high-definition video, which has been showing progress throughout the world, garnering particular attention. Moreover, material related to various types of coding technology, which acts as a supporting base for these media formats, especially those related to the newest HEVC (H.265) Codec, could be seen at many different booths, attracting the deep interest of many visitors.

The details will be examined in the next issue, but looking at the overall state of Japanese companies at the conference, Canon, mentioned above, had a large number of spacious booths exhibiting high-end 4K cameras and handhelds, low-light cameras, 4K reference displays, various leading lenses, and more. Sony also had a number of very large booths fitted with large screen theaters, which displayed 4K cameras, 4K organic EL monitors with detailed pictures and vivid colors, state-of-the-art workflows, and more, gathering a large number of visitors. One of the big three, Panasonic, had on exhibit high-end shoulder HD cameras, handheld AVCultra compatible recorders, as well as pro model 4K cameras and more.
As for the other Japanese companies, FOR-A had a variety of systems based on new advances including 4K technology. Ikegami displayed their newest camera models, developed in cooperation with ARRI, as well as their high-sensitivity cameras and more. Hitachi Kokusai Electric exhibited their cameras, an original focus of theirs, along with compact outdoor broadcasting cars equipped with their devices. JVC Kenwood showed off their handheld 4K cameras, NAC Image Technology displayed their high-speed cameras with increased functionality, and Shotoku exhibited a variety of intelligent photography support equipment. NTT Group had a variety of state-of-the-art coding and data transmission technology on display, while NEC presented their newest 4K encoder and super-resolution technology. Toshiba, along with their leading flash memory servers, showed off their 4K HEVC codec and other technology. In addition, Yamaha had their sound-related equipment, and Sumitomo Electric had their newest optic fiber-related technology on display. All of these companies assembled together as part of the high level of Japanese technical prowess, built up over many years, and noticeably garnered the attention of many visitors in the display area.

In addition, in the Future Zone, where the broadcasting and data transmission technologies of the near future are publicly displayed, NHK, along with the BBC, DVB, and HbbTV, set up a booth displaying the hybrid broadcast that began on NHK General TV in September, along with the Super High Vision (SHV) broadcast that will finally begin along with the hosting of the 2020 Tokyo Olympics, attracting many visitors who wanted a chance to catch a peek of state-of-the-art Japanese broadcasting that cannot be viewed in Europe (Photo 4).

In the evening on one of the middle days of the conference period, the IBC Award ceremony was held in grand style on the big screen of the ceremony venue. Within the awards given out for a variety of sectors, the JBA (Japan National Association of Commercial Broadcasters) received the innovation award in content delivery along with NTT Communications, Fujitsu, and Juniper Networks. We are extremely pleased by the fact that the technical prowess of Japan is highly praised, as this IBC award follows the one received by the NHK Research Laboratories last year.
In Part 2, I would like to report on technical trends and exhibition items that attracted the spotlight, including those of foreign companies.