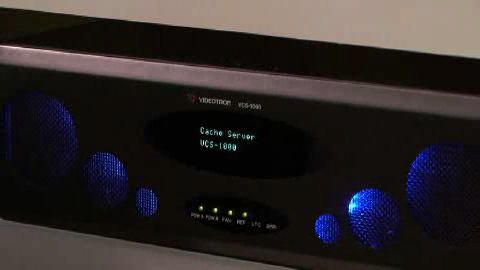 Videotron shows a cache server. A separate content server is connected to the VCS-1000 via a fiber channel.
The content server usually stores data in a hard drive, but some customers say that transfers from hard drives have problems in stability and demand for SSD-based stable transfers has been strong. So, the VCS-1000 server uses SSD.
This does not have movable components. Sometimes hard drives may suddenly stop running if servers have movable components. The VCS-1000 uses only SSD to prevent failure, and it is stable.
They target broadcasting stations, aiming for a product launch next spring with a view to market it overseas as well as in Japan.