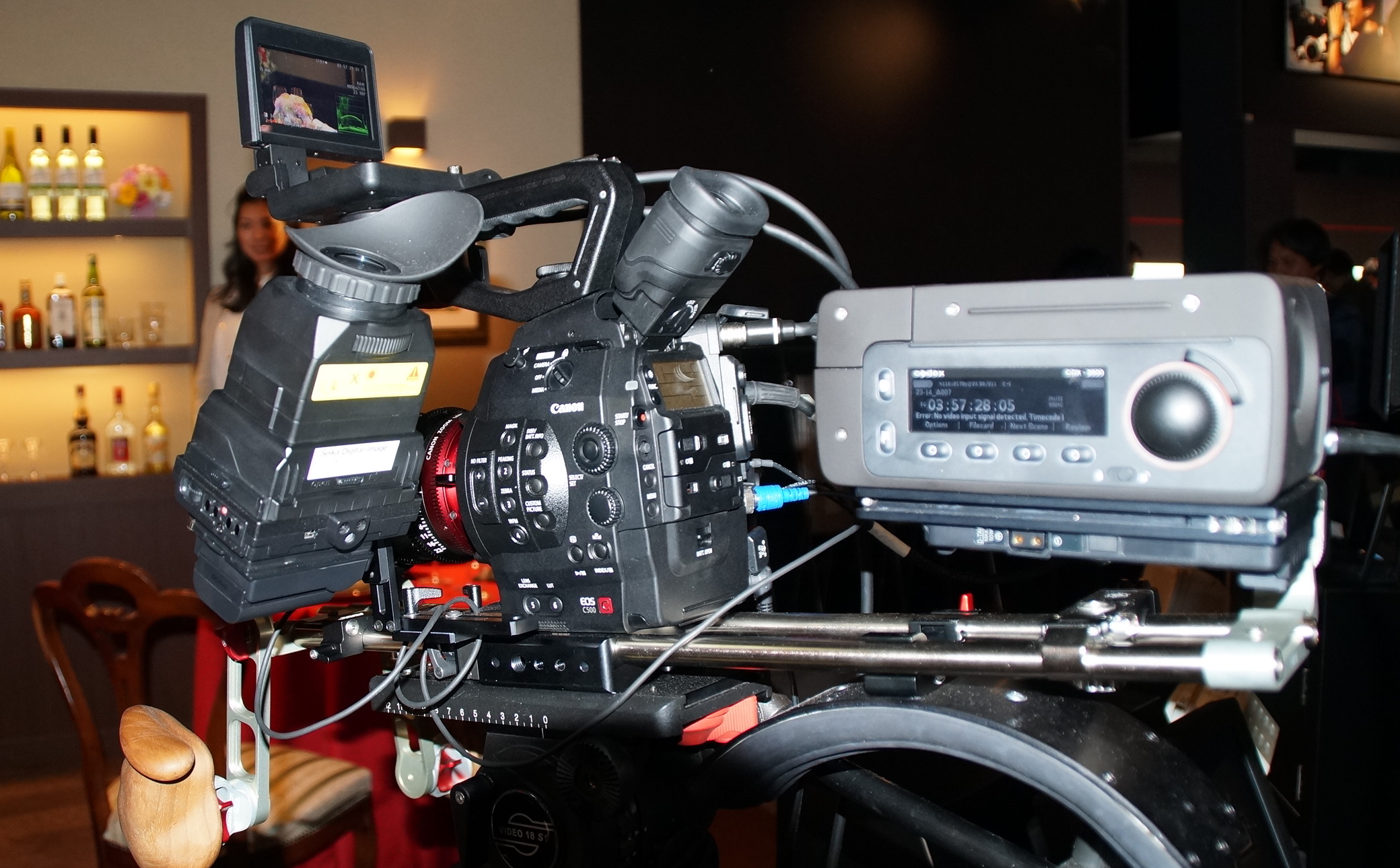 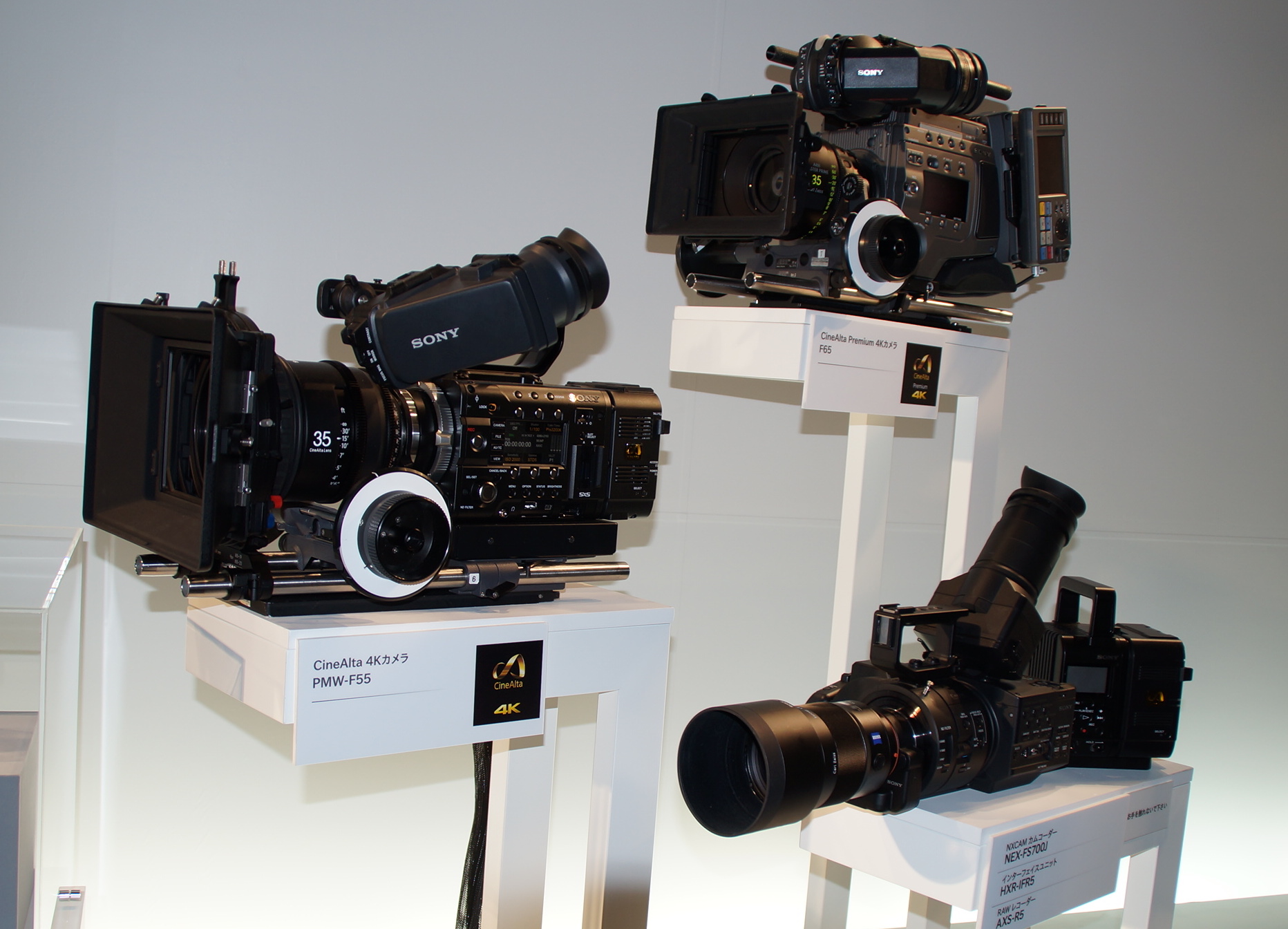 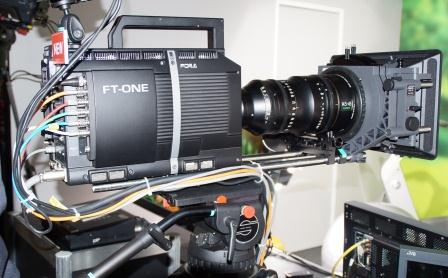 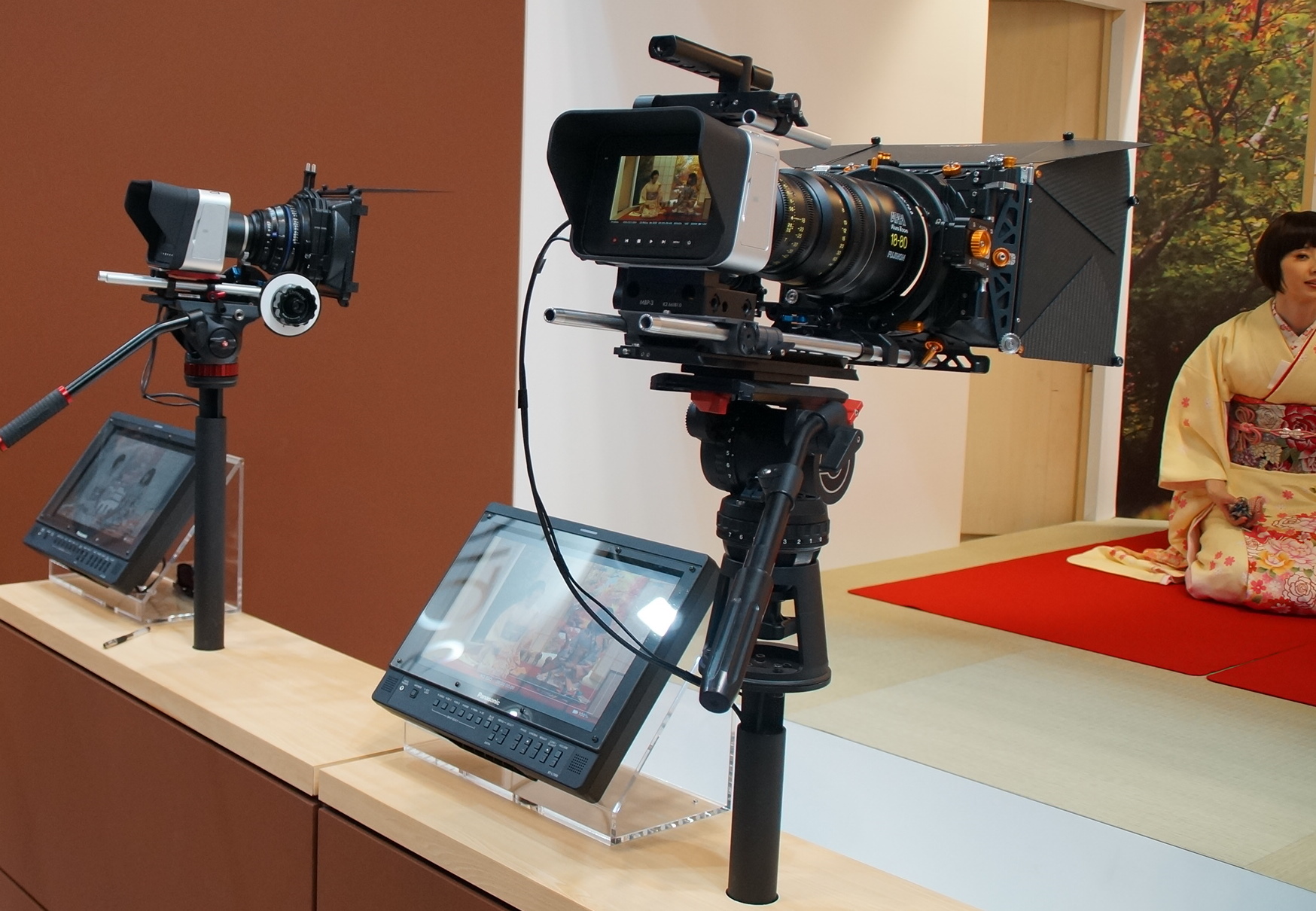 In the previous issue, I gave a summary of the overall situation as well as of the different types of joint events. In this issue we will look at the ever-advancing TV camera technology trends together with developments in video media. While high-detail 4K camera exhibits stood out, there is also a continuing diversification and multi-polarization of high-speed and high-sensitivity cameras, and compact low-cost models.

Canon focused its attention on high-resolution programming, commercial production, and movie production with its EOS Cinema System series exhibit. Its highest-end model, the 'EOS C500' is equipped with a high-sensitivity CMOS sensor (8.85 million effective pixels) which is equivalent to the super 35mm, and is able to shoot high-detail wide dynamic range 4K video using the log gamma which is highly sensitive and supports a high pixel count. Equipped with the 3G-SDI 2 system, it has RAW (60p, 10 bit) output capability and supports digital cinema DCI standard full 4K (4096×2160), QFHD (3840×2160) which works well with TV systems, as well as 2K (2048×1080) and full HD (1920×1080). The mid-class 'C300' is equipped with the same sensor and records to 2 CF cards in MPEG2 Long GoP at 50Mbps, while the 'C100' records to 2 SD memory cards in AVC HD format, which is characterized by its highly efficient compression. In addition, the single lens reflex camera type movie camera 'EOS-1D', which is equipped with a 35mm full-size large-scale CMOS (approximately 16.1 million effective pixels), records 4K video to a CF card in Motion JPEG. Also, the compact file-based movie camera that debuted at last year's Inter BEE, which uses a 3CCD 1/3' CMOS (2.37 million overall pixel count) and records to a CF card in MPEG2 Long GoP, is a comparatively low-cost video camera that still has powerful capabilities which can be used for movie and drama program production.

Promoting 4K production with the slogan 'Believe Beyond HD”, Sony's exhibit was headed by the CineAlta 'F65' camera and also included the new 'F55' model, as well as the compact 'F5' model. The F65 is equipped with an 8K CMOS (super 35mm size, 20 million overall pixel count at 4096×2160) and supports frame rates from 1 fps all the way up to the high frame rate of 120 fps. This high-detail camera, which can handle high-speed photography for 30p commercials and TV programs, as well as 24p movie production, can be used for a wide variety of purposes. The F55, equipped with a newly developed super 35mm CMOS (11.6 million overall pixel count), is a relatively low cost model that supports 4K to HD, is able to reproduce color accurately and also support high frame rates of up to 240p in HD mode. The F5 is an even cheaper model that has almost the same capabilities and features. The compact NXCAM professional camcorder which is equipped with a still large-scale CMOS can be used together with an external recorder to record 4K RAW data. These models have expanded the line-up of products which support 4K and diversified it to include models suited to different purposes such as full-scale film production and commercial production, mid-range film and TV program production, and promotional videos. We can expect high-quality content production to continue to increase in popularity.

The Panasonic exhibit, with the slogan 'Evolving AVC World”, showed the further evolution of their AVC Ultra series with new encoding. The new model in the P2HD series is a highly sensitive, compact, lightweight and low-cost shoulder camera recorder equipped with a newly developed CMOS that supports full HD, 10bit, 4:2:2, AVC Intra100. Targeting a wide range of users including professional video producers and the broadcasting industry, it will soon be loaded with a 'micro P2' memory card (the existing P2 card is currently comparable in size to SD cards) and upgraded to AVC Ultra. In addition, a wide variety of cameras including a full HD camera equipped with a 4/3” MOS sensor with micro four thirds support, their highest-end high-resolution high-sensitivity P2HD camera recorder, an AVCCAM series shoulder type high-resolution full HD handy camera, and a compact, light-weight and low-cost handheld were also on display.

Ikegami Tsushinki's display included a wide variety of cameras including the tapeless GFCAM camera which has already proven its capabilities, compact information cameras, special purpose super high-sensitivity cameras, and high speed cameras, focusing on its high-resolution, reliable Unicam HD series. Its flagship unit has 3G support, is equipped with a high-performance progressive CCD, and has full HD 4:4:4 and FPGA 16-bit video processing which allows for the accurate reproduction of the dark portions of gradients as well as 2x slow-motion. The display included a reference exhibit with an example of one of their special purpose cameras: a super high-sensitivity camera that can shoot full HD videos (60P) even at 0.02 lx, which is equivalent to moonlight. A full HD multi-purpose camera that is compact and yet has an AVC function which allows for the shooting of high-quality video with accurate color reproduction even with low levels of lighting was also exhibited. The exhibit also included the super high-speed camera 'Hi-Motion II' which was developed jointly by NAC Image Technology and Ikegami, and boasts further improved image quality, as well as the 'ALEXA' series of digital cinema cameras made by ARRI. There was also a lineup including a flagship model equipped with a large-scale 4:3 super 35mm sensor that can be used in conjunction with a Carl Zeiss master anamorphic lens to shoot CinemaScope footage, and a model which has a head section that can be separated from its recording section allowing shooting even in poor conditions. The compact and light-weight head can also be attached to a 3D rig or steady cam.

JVC KENWOOD's exhibit included a compact hand-held 4K camera and an HD camera. The former uses a 8.29 million pixel rear exposure CMOS, is equipped with a high-sensitivity 10x optical zoom lens, and can record 4k (QFHD: 3860×2160) 60p/50p/24p video to SD cards (H.264, about 2 hours at 144Mbps to four 32GB cards). The latter HD model uses a 3CCD 1/3' CMOS, is equipped with a 23x optical wide zoom lens with a camera-shake correction function, uses SD cards as its recording media, and supports both XDCAM EX and AVC H codecs. ASTRODESIGN, which is renowned for its high-detail video systems, displayed a compact 4K (QFHD) camera with large-scale micro four thirds support. There are two types: one that allows a maximum 100m distance between head and processor using an optical fiber composite cable, and one that allows a 300m extension using single mode optical fiber.

FOR-A's display included distinctive cameras with special features. The high-speed 'FT-one' camera, which is equipped with a full 4K high-sensitivity CMOS sensor and internal memory, and which can shoot high-speed video at a maximum of 900 frames/second, was shown in Japan for the first time. In addition, the next-generation super high-sensitivity 'FZ-B1' camera (made by Flovel) replaces the EM-CCD with the newly developed CMOS and has an automatic sensitivity adjustment function that allows for daytime shooting and also eliminates the smearing problem associated with CCD. The full HD 'Flash Eye' camera, which is capable of high-speed photography up to a maximum of 700 frames per second, was also on display. NEC displayed a light-weight, full HD, high-sensitivity camera equipped with a 2.2 million pixel CCD that had added features which have improved its video quality. Such features include an improved S/N achieved through its proprietary video clarification technology, a function to reduce noise when sensitivity is increased, and a function that eliminates blurriness caused by atmospheric haze. Its near infrared shooting mode has been made a standard feature, and improvements have been made to its automatic sensitivity adjustment, and automatic tracking white balance functions. This enables it to be used in full-auto mode for continuous day and night shooting for disaster reporting and live broadcasts.

Blackmagic, whose various video systems and devices are rapidly gaining in popularity around the world, exhibited its cinema camera which gained much attention at the recent NAB and IBC. Attendees were allowed to freely touch and examine the camera. Equipped with a 2.5K image sensor, it has a wide 13 stops of dynamic range and can record uncompressed RAW and compressed files to its built-in SSD. There are 2 models: one with an EF mount and one with micro four thirds support. Its design is based on a concept completely different from existing TV cameras - it is a low cost camera that can be monitored using a large scale LCD just like with digital cameras, while using it for hand-held shooting. It has the potential to be used for many different purposes.

Grass Valley exhibited its new LDX series camera which has improved image quality and features compared to previous models. It uses a CMOS developed in-house and has multi-format 1080i/p and 720p support. It has a number of improvements compared to previous LDK series models: it has a sensitivity of F12, S/N of 60dB, reduced power consumption, is more compact and light-weight, and has improved mobility and operability. RED Digital Cinema, which has proven itself world-wide in the digital cinema field, showed off its latest 'EPIC' and 'Scarlet' models and also demonstrated a RED workflow. Nobby Tech demonstrated a number of VISION RESEARCH's high-speed 'Phantom' series cameras, including the high-end 'FLEX' model equipped with a new sensor type that has improved sensitivity; the high-speed, high-sensitivity 'V641'; and the newly-introduced compact light-weight 'Miro' which is a full HD camera that can shoot at 10-1500 (50x speed) fps and record RAW data to its built-in 12GB memory.