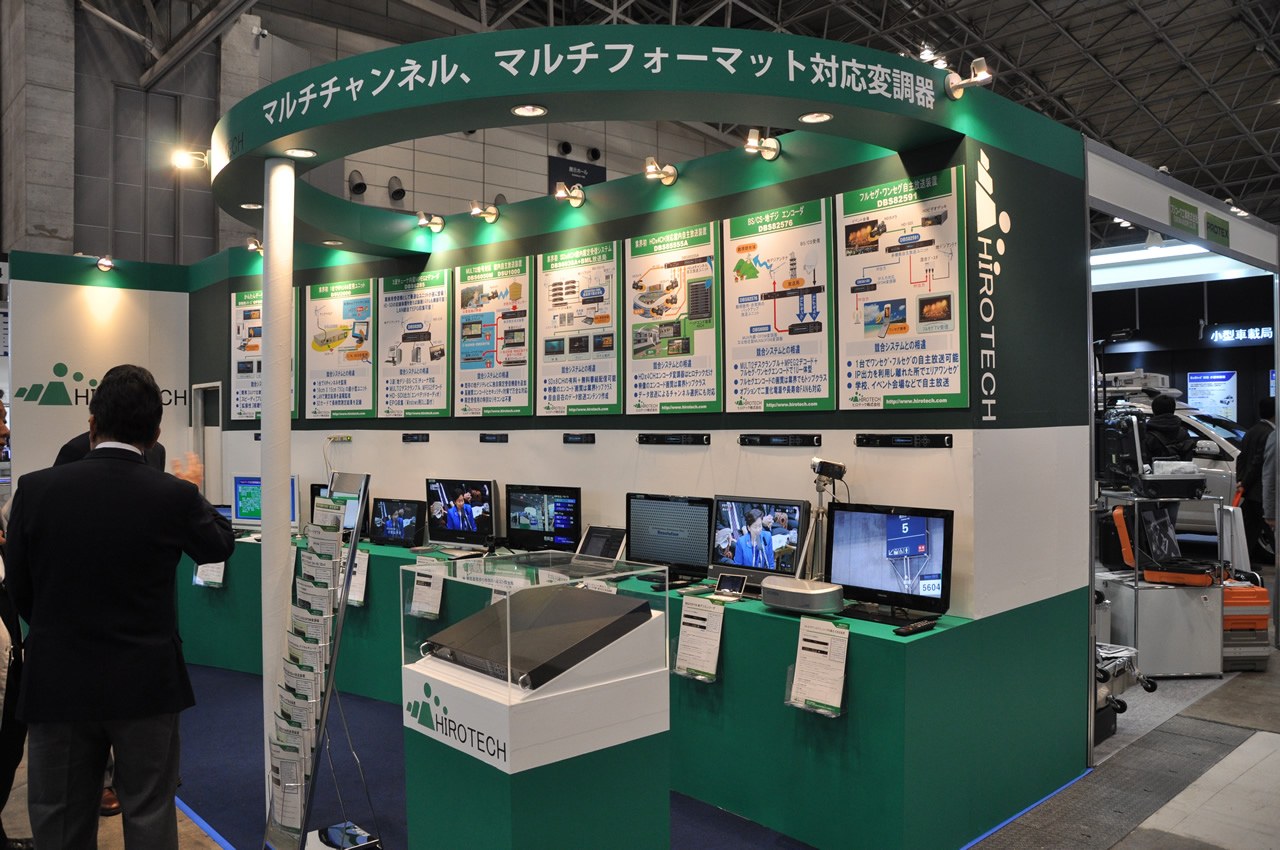 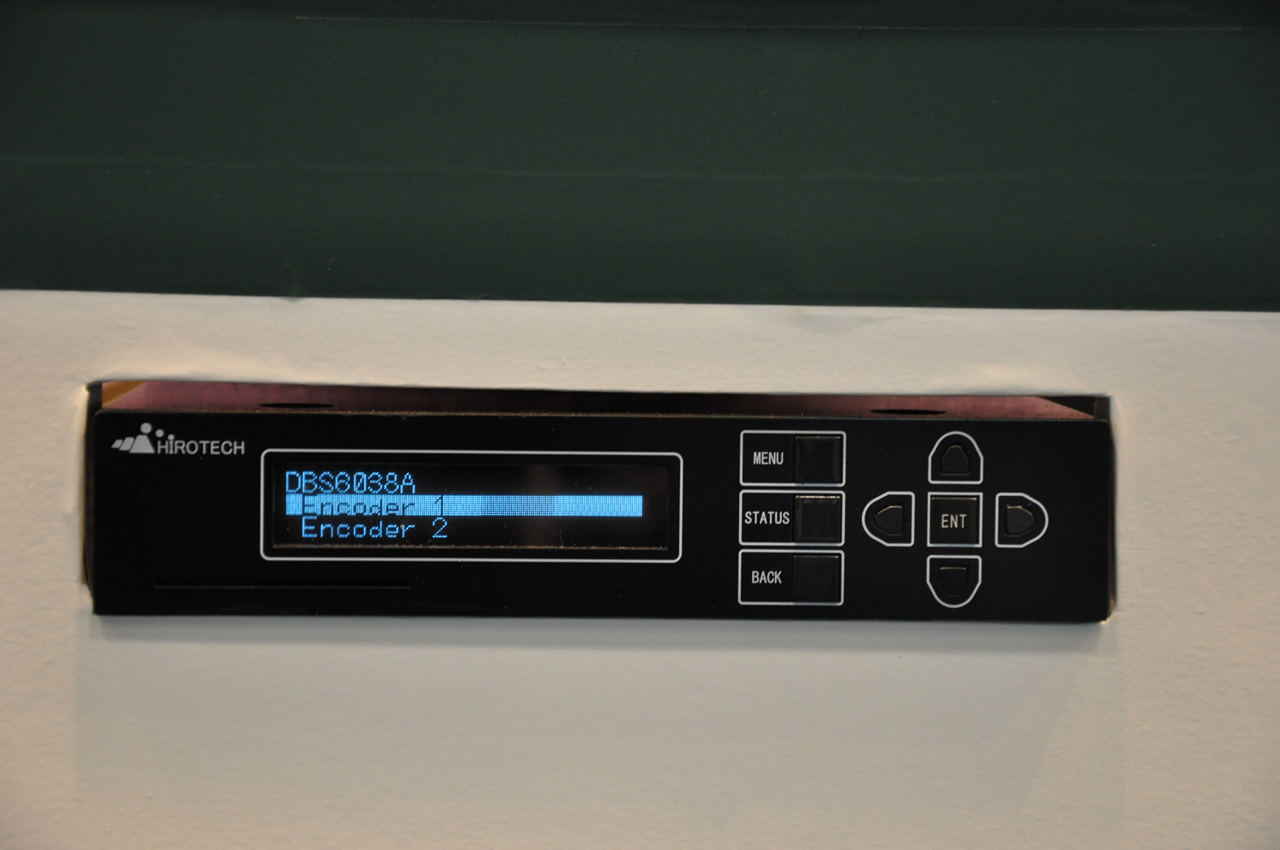 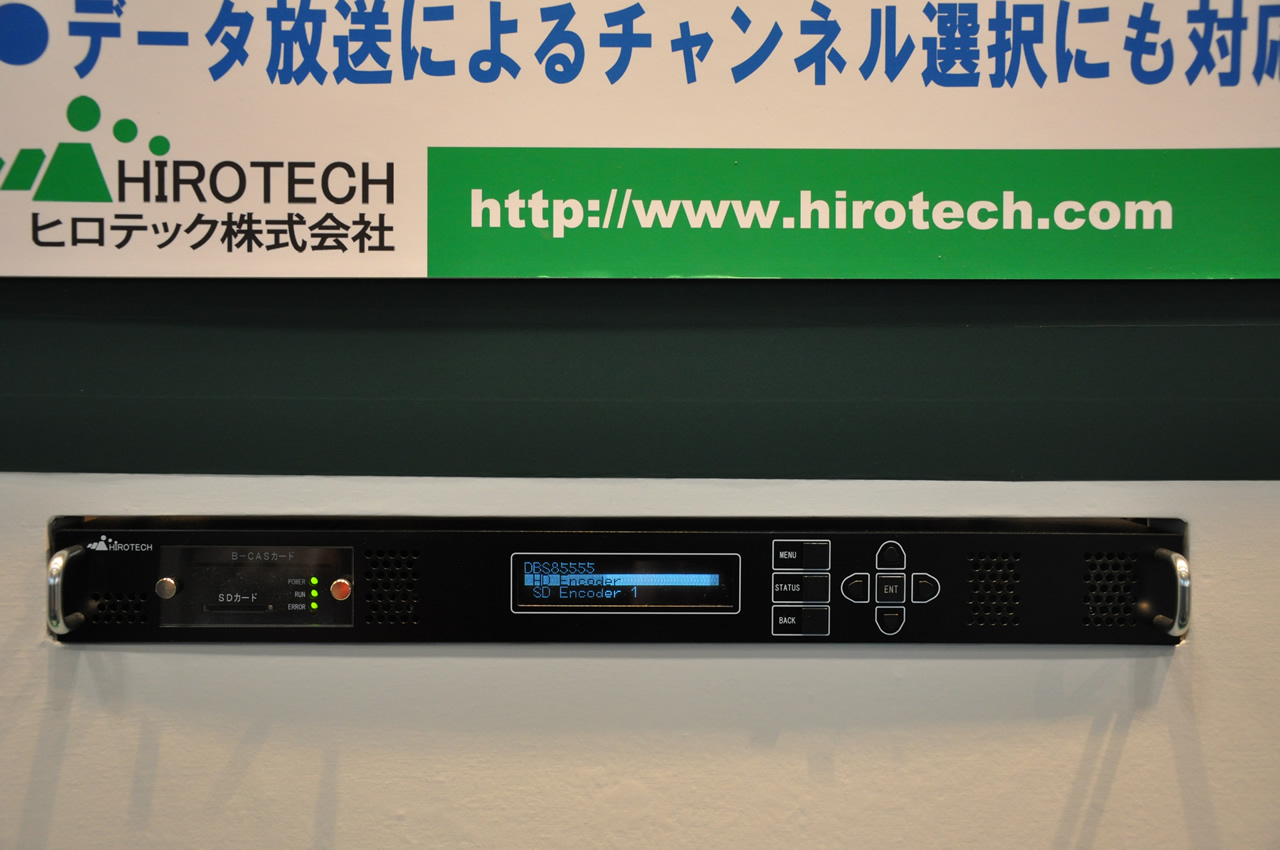 ■Demonstration of a single unit with 4 onboard MPEG2/H.264 multi-format encoders and modulators

At InterBEE 2011, Hirotech is holding a debut exhibition of the “DBS85555A”, a single-unit in-building independent broadcasting device loaded with four boards, each consisting of an MPEG2/H.264 encoder and modulator. At the booth, there will be a demonstration in which an HDMI signal output from a Blu-ray disc player will be converted into HD-SDI, inputted to this device, encoded as a 1080i full HD image, and outputted to a digital television as an OFDM-converted RF signal.

This “DBS85555A” is a single-unit in-building independent broadcast unit with an onboard 4-channel OFDM modulator-equipped platform with built-in MPEG2/H.264-HD/SD multi-format encoders. It is capable of VHF/UHF/CATV channel band RF output. Also, thanks to its built-in Ethernet port, it can be accessed via a Web browser by entering its IP address, in order to set its encoder rate, audio mode, PSI, modulator output channel, etc., as well as monitor its status.

Motohiro Kurisu, Hirotech’s CEO, points out the device’s greatest advantage, “By developing the modulator with FPGA, we were able to miniaturize it and make it compatible with MPEG2-HD/SD and H.264-HD/SD multi-formatting.” In addition, “the extremely high quality of the encoded picture is another major selling point.”

Hirotech says, “This equipment’s ODFM modulator is compatible with the international ISDB-T format based on the Japanese ISDB-T aboveground digital broadcast format adopted and used in South America, so it is also compatible with the JAVA-based data broadcast format called GINGA. It has already been tested.” Mr. Kurisu explains, “We are currently in the promotional planning phase to launch this product in Argentina.”

According to Mr. Kurisu, the product’s launch “is scheduled for February of next year, and will be priced at around ¥2 million.”

■Demonstration of a single-unit, half-size broadcasting device with an onboard MPEG-2/H.264 x 8-channel encoder and modulator

Hirotech is exhibiting and debuting the “DBS6038A”, a single-unit, half-size piece of broadcast equipment with 8 onboard channels of MPEG2/H.264 SD encoders and 2 onboard super-miniaturized OFDM modulator systems.

The “DBS6038A” has 2 onboard OFDM modulator systems, so it can output RF on the channel of your choice. The input system has 8 analog input signal systems and includes a special cable compatible with analog composite video, S video, component video, and L + R audio. Also, with its built-in PSI generation function, it can also provide a simple EPG so that all SI information necessary for aboveground digital broadcasting can be sent included. For the output system, there are 2 aboveground digital broadcast RF output systems. Like the “DBS85555A” mentioned above, all the data settings can be modified and the unit’s status can be monitored via a Web browser by entering the unit’s IP address.

Mr. Kurisu had this to say regarding the reception of the equipment: “At hotels, there was a need for a specialized STB as well, but because this signal can be received by a digital broadcast compatible television, our equipment provided a total solution, allowing them to reduce costs.” Thus, “we have already received orders from major SI retailers for use in hotels.”