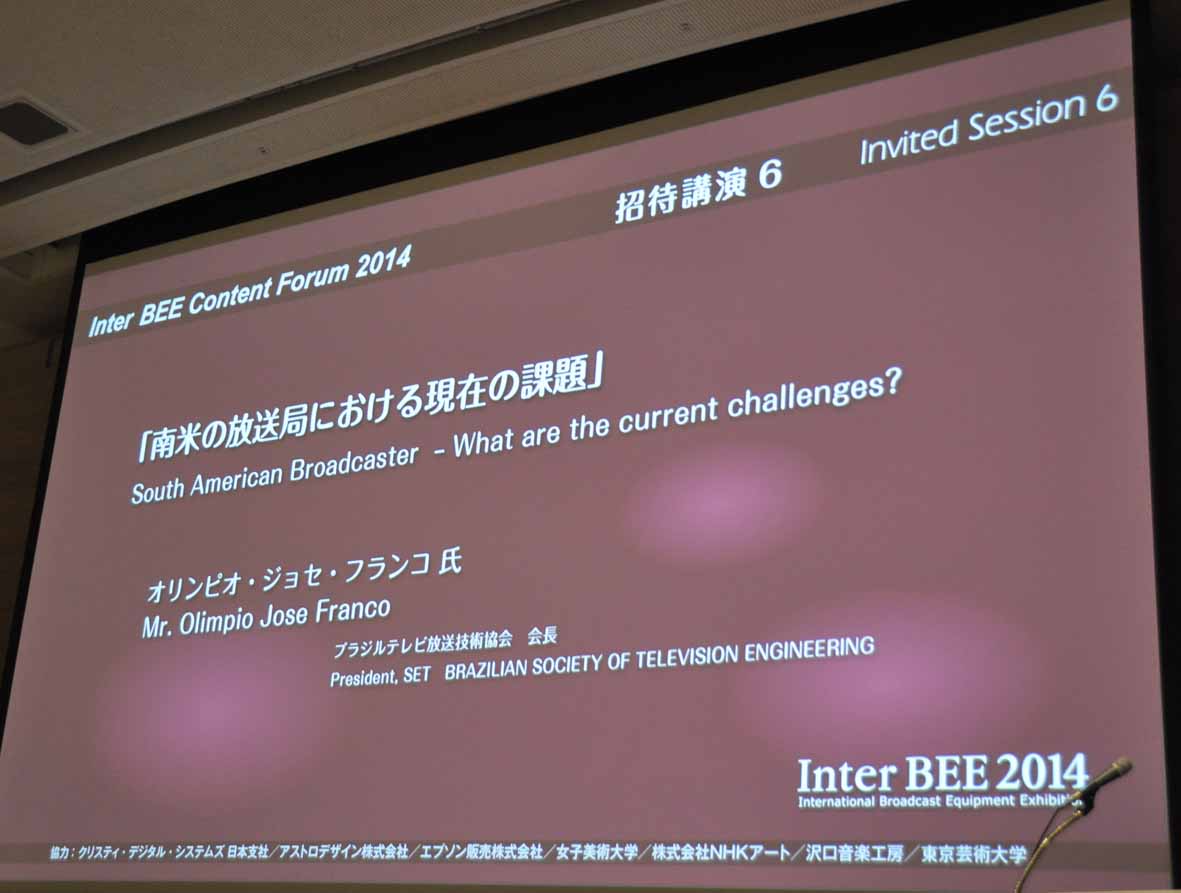 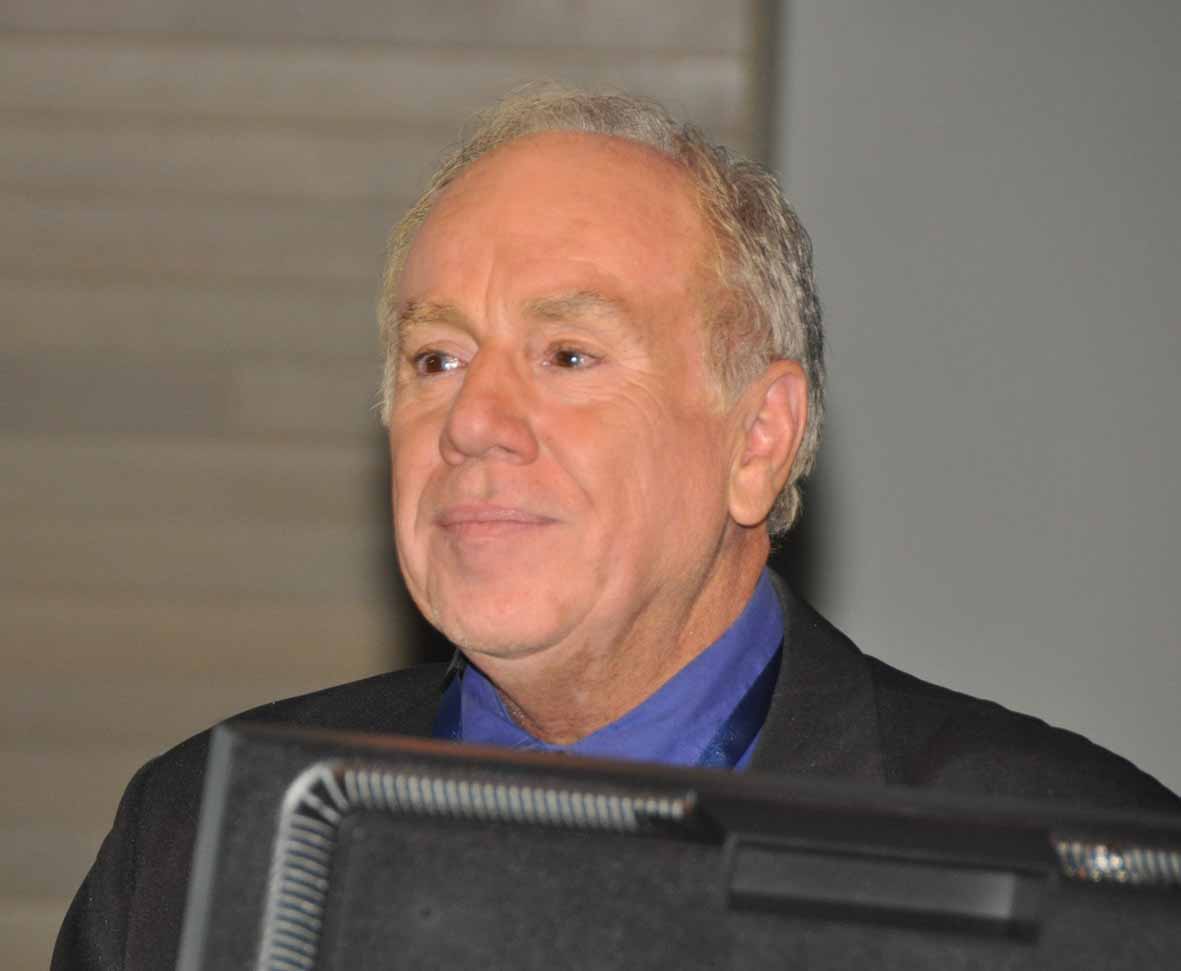 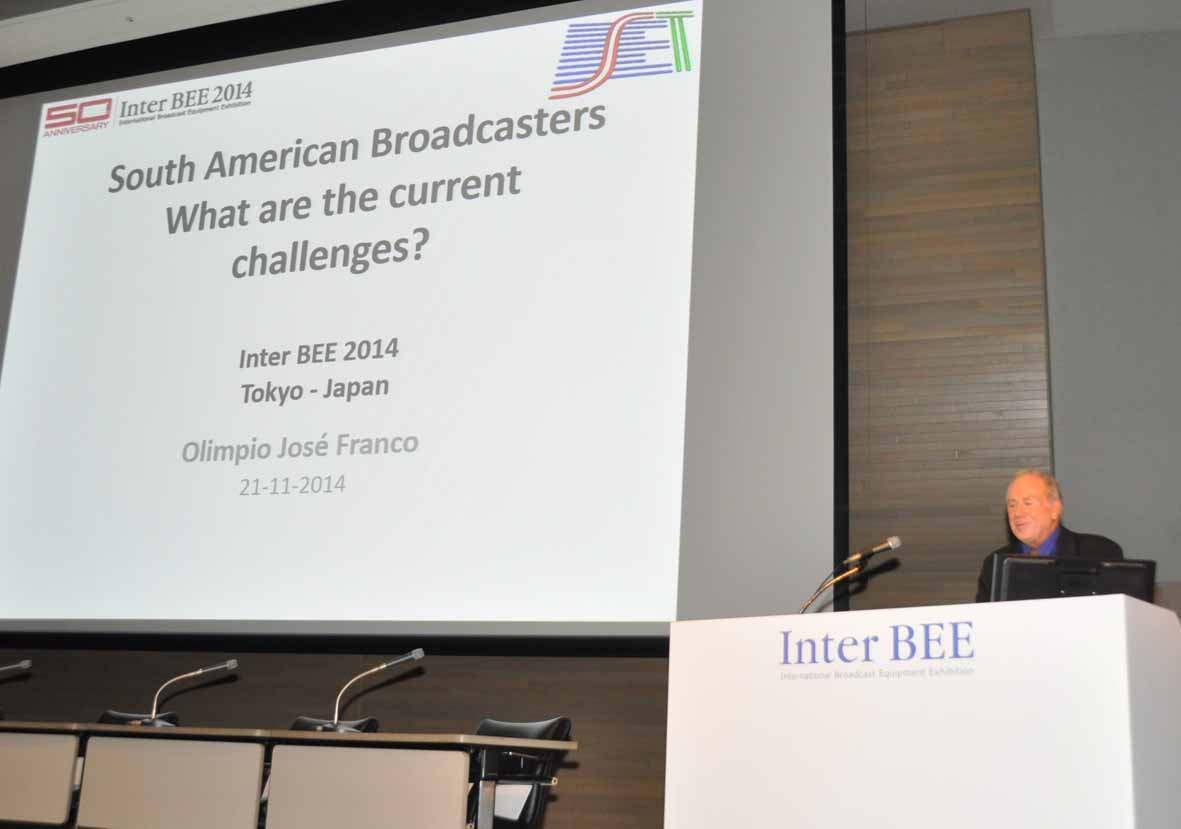 Olimpio José Franco, president of the Brazilian Society of Television Engineering (SET), gave a keynote speech at Inter BEE at 12:30pm on November 21, discussing the most present issues South American broadcasters face. The keynote covered the situation in Brazil, Argentina, and Chile. Franco also highlighted issues like redistributing the airwave frequencies, and the shared use of certain bandwidths with mobile network operators. He indicated that these are life-and-death issues for the continued provision of free broadcasting in the country.
（Hiroshi Suginuma, editorial writer, Visual Communications Journal; lecturer, College of Industrial Technology, Nihon University)

■Digital Broadcasts in Brazil Began in 2007; Cover 70% of the Population
Brazilian DTV agreed to employ ISDB-T (an improved format of ISDB-Tb) in 2006, with broadcasts beginning in 2007. Today, the format reaches 70% of the population, but it has yet to penetrate areas with lower population density. Expanding to cover small cities and villages remains an issue. In addition to improving image quality, digitization has helped improve the flexibility and robustness of the country's broadcast system. The commencement of DTV broadcasting also ushered in the creation of HD programming; in this way, there has been a ripple effect. Over 15 million televisions are sold annually in Brazil, with that number expected to grow further with the upcoming 2016 Olympics.

In Brazil, television remains a strong form of media, with its share of the market growing year over year -- it currently stands at 66.5%. Magazines and newspapers, by contrast, are declining. The Internet saw initial growth, but it too, is now contracting. For these reasons, television remains a powerful force in the country.

Cessation of analog broadcasts will begin in Rio Verde (in the state of Goias) by the end of 2015. Following that, the stoppage will be rolled out to large cities and developed areas from 2016 through 2018. This leaves small-scale cities and villages as an outstanding issue. Brazil is home to 4,982 towns, where 64 million people live. Although the full phase-out is planned for the end of 2018, most relay stations in these regions belong to local municipalities. There is as yet no consolidated policy that applies to Brazil's states in total. Each town has a range of issues it must face, leaving the country ill-prepared to realistically meet the analog shutdown.

Things are different in Argentina, which borders Brazil. The majority of networks are publicly managed, with private broadcasters subject to regulations. Revisions to the telecommunications act are also the subject of ongoing debate. Licenses are provisional, making it difficult for investors to fund transmitting stations with peace of mind.

In Chile, the market for advertising is valued at $1.423 billion, with television holding 42.7% of that share. Over the last four years, that share has also grown by 2.63%. However, paid broadcasts have been growing at a rapid clip, so free broadcasts offered at low-quality analog levels are being pushed to move towards digitization as soon as possible.

Free broadcasting accounted for 51% of Chile's market in 2010, but that figure now stands at 42.7%. Chile is home to 5.2 million households, with 4M ISDB-Tb receivers having been sold to date. As of last year, 59% of units on sale were ISDB-Tb models. After five years of deliberations, DTV regulations were finalized on May 25 of this year, with that national policy to be publicly announced by year end.

Broadcasters in Brazil have lost access to the 108 MHz span covering channels 52 to 69 (698 MHz-806 MHz). There is worry that broadcasters will be unable to deploy new technologies following a restructuring of the airwaves. In effect, this would spell the end of terrestrial services in the country.

In addition, the 700 MHz band is being slated for the use of LTE. It has already been experimentally shown that LTE use of this frequency causes interference with ordinary broadcasting. However, it remains undetermined which filters can be used to mitigate this effect. New tuners are built to account for such interference, but older devices are not. The issue is believed to affect not only channels proximate to the 700 MHz band, but all channels between 14 and 51. The issue also holds true for one seg.

Another issue is that of assigning mobile networks to the 478-698 MHz range. At ITU/WRC-15 (the World Radiocommunication Conferences, held once every three years), the idea of adding a new bandwidth for mobile telecommunications is being discussed. If governments decide that the 478-698 MHz range is not being used as white space, mobile networks can transmit in that range, but harmonization is impossible when taking into account white space interference. The range in question is a limited bandwidth that allows for free broadcasts. In the US, Canada, and Belgium, only about 5% of households receive free terrestrial broadcasts. However, that percentage is 80% in Italy and 95% in Brazil. The ITU should take into account these regional differences.

Free broadcasting remains a powerful media outlet. IP transmissions cannot reach a vast chunk of the population; in point of practice, IP is a 1-to-1 unicast. The future of ongoing terrestrial broadcasts will depend on whether governments and the ITU promote fair regulations.