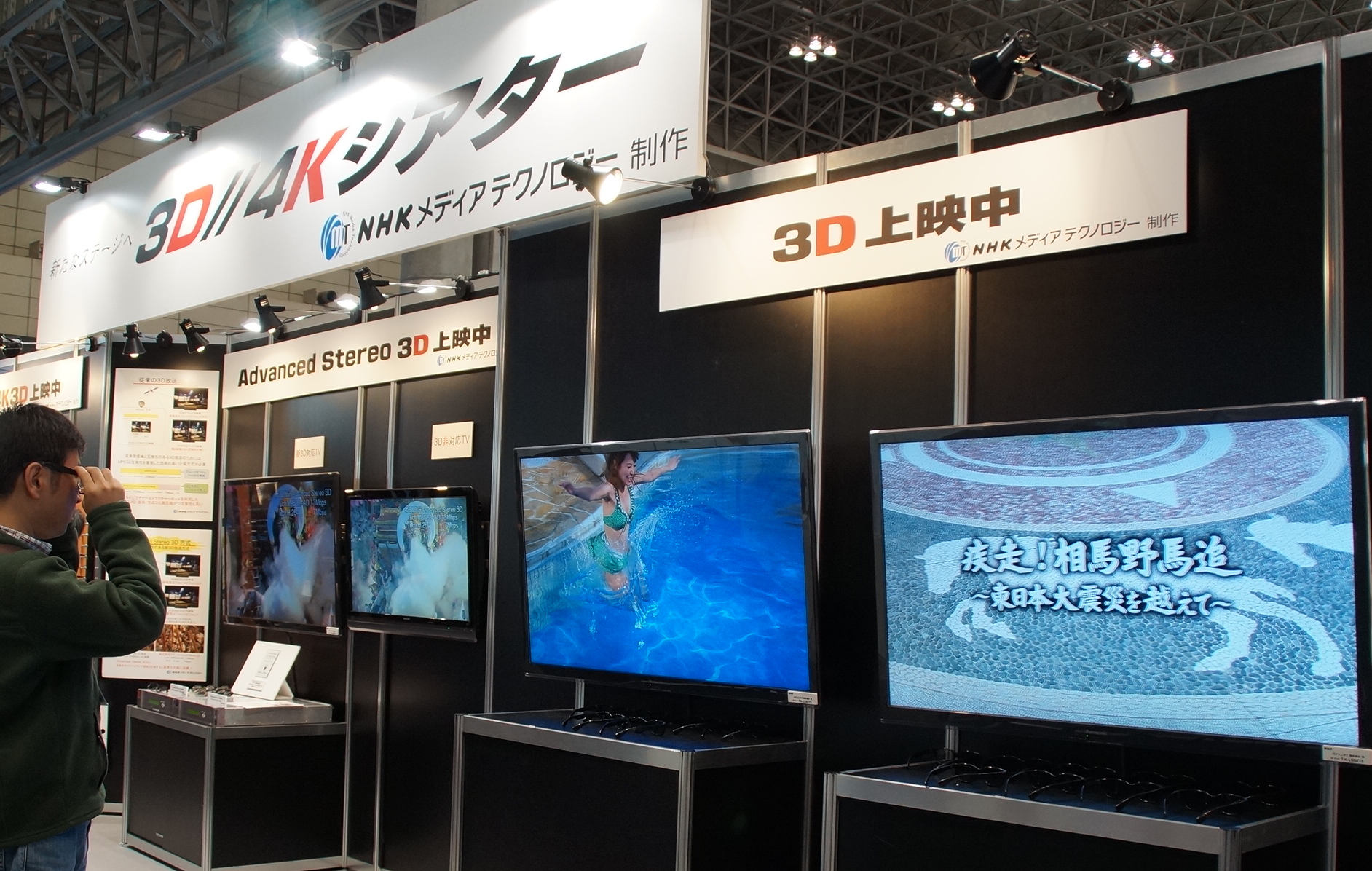 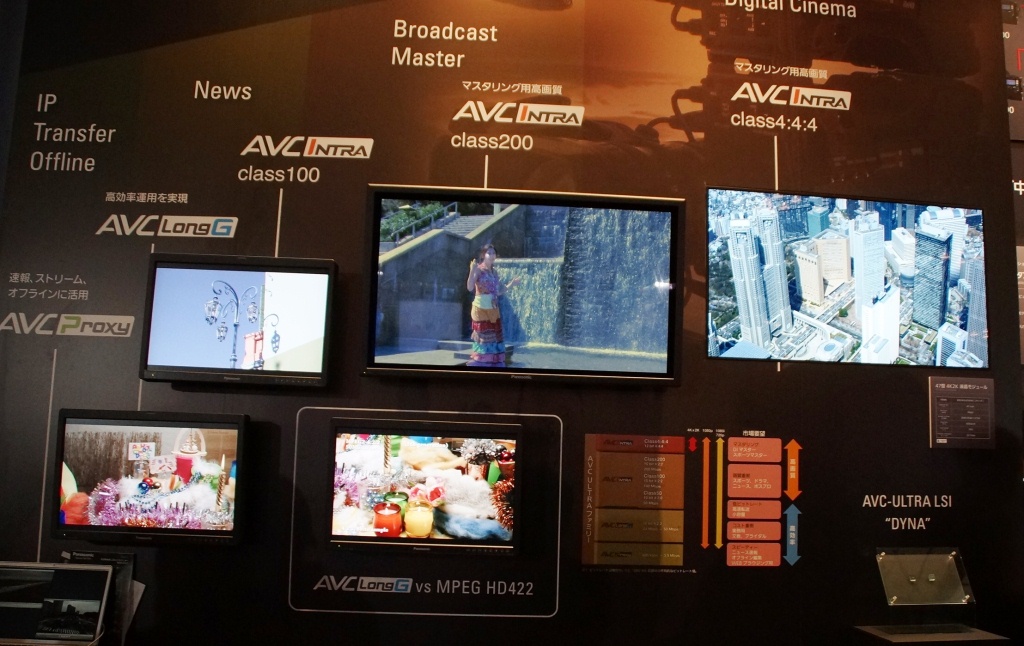 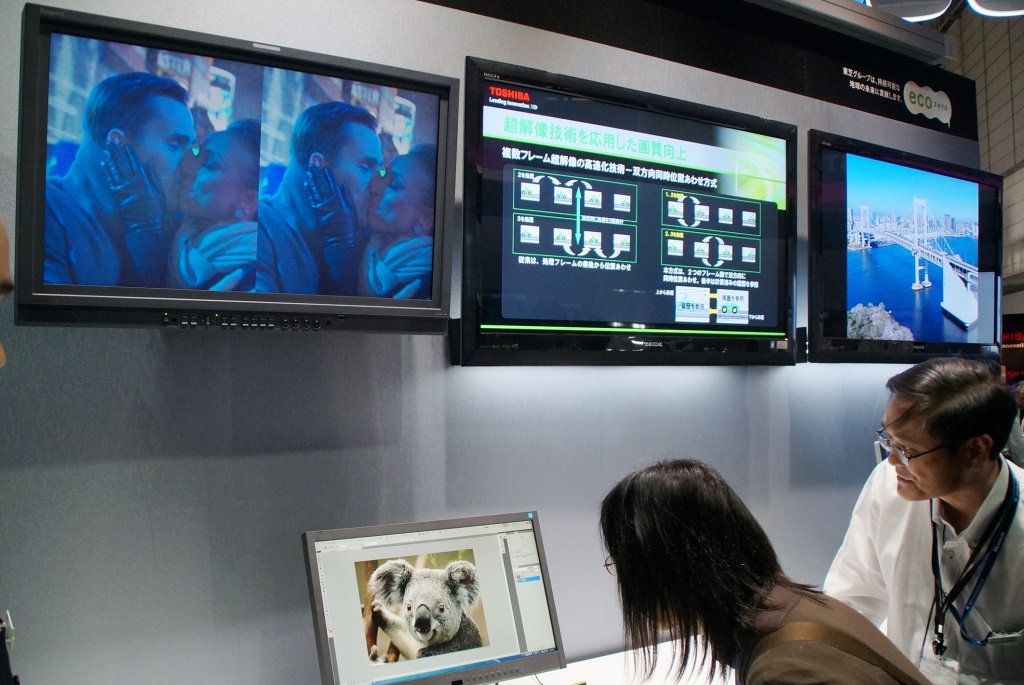 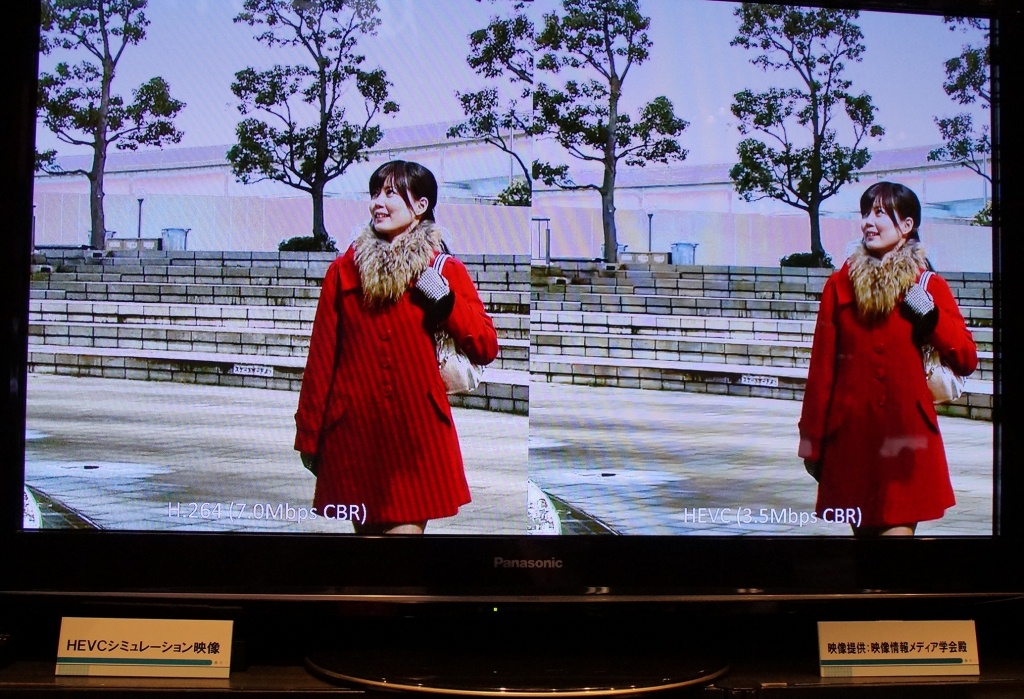 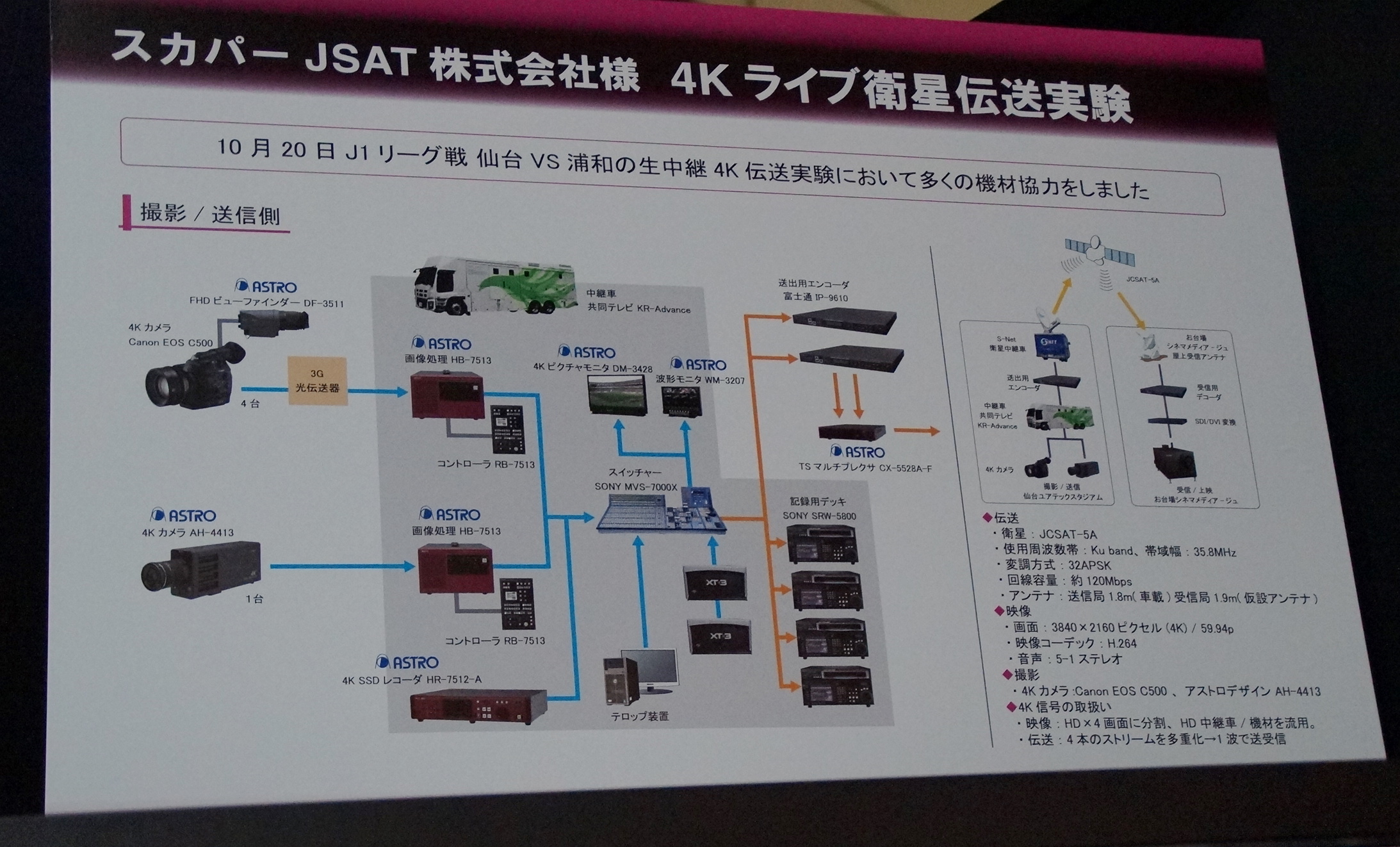 In (Part 1), I gave an overview about the overall state of this year's Inter BEE - which was a little bit different from other years - and various events; and in (Part 2), I discussed some information about the diversification and multipolarity of cameras in order to meet various deployments of visual media. In (Part 3), I provided information about technological trends in displays which project high-quality content and image monitors which reliably view and manage images with progressively higher image quality and content production systems that are progressively switching over to being file-based. In this current issue, I would like to look at trends relating to equipment of all fields in the digital age, coding technology relating to systems, and delivery/transmission technology.

The first topic I would like to discuss is the NHK media technology Advanced Stereo 3D. It is a dual-stream 3D broadcasting method which is compatible with current broadcasting, unlike 3D broadcasting via the conventional side-by-side method. Standardization is apparently in the process of being proposed to ARIB. If watching with a 3D-compatible TV, then one can enjoy 3D images of a higher quality than those of conventional methods, and if the TV is not 3D-compatible, then the image will become a normal 2D image. The company has been involved in the creation of HD 3D images and in equipment development for over 20 years since the late 1980s, and has also made progress with 3D content archives; they also exhibited a 3D work made with conventional 3D methods, which they were spurred to create due to the 2011 Tohoku earthquake, 'Soumanomaoi Warrior Procession'. Furthermore, in regards to the 4K3D that they have been involved in since 2009, they displayed an image of two QFHD(3840×2160) IPS liquid-crystal panels on a polarized 28' 3D monitor (Keisoku Giken) synthesized with a half mirror. These series of initiatives are apparently aimed towards the commencement of SHV test broadcasting to be started in the near future.

Sony has been advocating the XAVC video format, which includes from 4K and HD to the household sector, as new production solutions to handle higher quality and diversified contents. The resolution is compatible with full 4K(4096×2160), QFHD, full HD and proxy, and the compression technology is H.264, which is efficient and of high quality. The bit quantity has a good gradation reproducibility via 12, 10 and 8 bit. The color sampling is 4:4:4, 4:2:2 and 4:2:0, and the frame rate is 60F-compatible. The data quantity is much lighter with XAVC for F65's RAW, and with the MXF file format, it is possible to use existing editing systems and suchlike. There is a strategy of changing to an open format in order to expand the production environment via 4K, and in the suite room a demonstration exhibition was being held via Alliant Partners' Avid and Grass Valley, among others.
Panasonic is advocating AVC Ultra, which can be used for a wide variety of purposes as a new system of video coding. The most superior AVC-IntraClass4:4:4:, which keeps 4K and digital cinema in mind, as well as the broadcasting-use AVC-Intra Class 200, Class100 and Class50, and the Long G (which excels in terms of cost performance) and the low-bit-rate proxy-use AVC-Proxy have become family. Using a high-definition display, they displayed images via different codecs and allowed the images to be evaluated.

'Superresolution' which improves image quality, thus meeting the requirements of this high-image-quality age, was also announced. NEC displayed high-vision images which were processed via re-configurable superresolution, changing low-resolution multi-frame images to high resolution. Toshiba announced superresolution technology using the information inside the frame (which uses pixel information of the spacial vicinity) and between the nearby frames, and Keisoku Giken announced 4K images which were uploaded from original HD images and were processed via their proprietary superresolution method.
Much attention was paid to an exhibition regarding the importance of electronic watermarking in the Internet age. Mitsubishi Electric announced that as a result of technology which has been the product of joint research with NHK STRL, digital watermarking has been developed in which additional information can be embedded/detected in real time without causing a visual impact onto the image, and is tolerant of compression methods and size shrinking, etc. Using T3 Media's library content, a demonstration exhibition was held. The concept is different, but Fujitsu announced a 'new transmission technology which mediates images', which can add information separately on a TV image so that it can not be visually understood, and at the receiving side, if the screen is photographed with a smartphone, then added information can be obtained. Apparently, they are thinking of various uses such as product promotion, travel bookings, store information, etc.
Several companies made announcements regarding HEVC (High Efficiency Video coding), which is the next-generation coding scheduled to become an international standard next year. It is expected to have approximately twice the compression efficiency of H.264, and is compatible with both 4K and 8K. It will have a major impact upon future media expansion such as SHV broadcasting and Internet video services. Various companies are in competition regarding related development. Fujitsu has conducted a comparative exhibition of full HD images that were compressed via H.264, and images that were compressed via HEVC at the same bit-rate. The delay time was short, and the difference in image quality was clear. NTT announced 4K and HD images which were encoded/decoded via HEVC, and NEC announced the differences in image quality of simulation images, between H.264 and HEVC at the same bit quality, and then at half the bit rate. Mizuho Information & Research Institute, who have been progressing the practical uses of advanced information transmission technology, exhibited stream analyzers which analysed the HEVC file and then displayed it graphically. The compression data's block size and movement information could be confirmed on one screen, and it is apparently also useful for HEVC-compatible device and software development, etc.

The NTT Group held an exhibition of various solutions for broadcasting and CATV other than HEVC. Various announcements were made, including an announcement regarding a H.264 IP encoder/decoder (in which if one-chip-LSI is installed, then even at a low bit-rate, broadcasting-parallel high image quality and low delay is achieved), as well as regarding a super high-speed IP video system which is light-weight and compatible with 4K workflow and low-delay software, and can achieve high-quality image transmission at low cost via PC-parallel performance. K-WILL exhibited its second-generation automated quality monitoring equipment, in which a single stimulus-type (evaluating quality without using evaluation images) has improved the detection precision of block noise and line noise, and a double stimulus type which implements full reference evaluation and can detect errors in a single pixel unit. Additionally, it is also equipped with a volume measurement function, in which a program's average volume can be accurately measured. Apparently it is already being used for the inspection of material conversion work, with program archives and suchlike. Also, there was an exhibition regarding multi-CH image quality monitoring equipment which is space-saving and low-cost, which utilizes a single stimulation method and is intended for CATV stations and IPTV stations.
Fujitsu announced live transmission of 4K images within a venue, in conjunction with ASTRO DESIGN. Between the two booths, LAN cabling was installed, and using two sets of the image transmission equipment “IP-9610”, a HD image which divided 4K into 4 parts was encoded with H.264 and transmitted, and at the receiving side, with two decoders, the 4CH signal was simultaneously received and decoded, and displayed on a 4K monitor. This method has apparently also been used in satellite transmission experiments of the J1 League on SKY PerfecTV JSAT, which were conducted in collaboration with ASTRO. Other than that, exhibition of cloud file transmission and ultra-low-delay IP codecs, and exhibitions regarding media asset solutions were displayed. Additionally, JVC made an announcement in regard to uncompressed transmission experiments between multiple bases on an IP network.

FPGA(Field Programmable Gate Array), which is integrated circuits in which equipment manufacturers can flexibly set functions via software, is used not only in the coding field (transcoders, etc.), but also in many other fields such as camera/display signal processing systems, etc. Xilinx and ALTERA, which are competing on a worldwide scale for the FPGA market share, both made announcements regarding new technology, in collaboration with respective affiliated companies. At the booth which they shared with Tokyo Electron Device, Xilinx (who commodified during the mid-1980s starting with FPGA) announced and exhibited a broadcast evaluation kit by a company called Omni Tek, via the latest model “Zynq-7000”. They also announced Video over IP and memory recorders, and broadcast-oriented voice applications and suchlike. On the other hand, ALTERA (who shared a booth with their agents Altima and exhibited items such as up/down convertors and advanced system development kits by multi-video input.
intoPIX (Birijji Island) released a 4k video using a JPEG2000 codec with ultra low latency achieved through an original algorithm, and FPGA (Xilinx). JPEG2000 is also used as a DCI standard for digital cameras and is an effective high quality coding method for the transmission and distribution of 4K and 8K video. intoPIX's technologies such as these are used in many third party products such as servers produced by AstroDesign and Asaka. Media Global Links also exhibited its multimedia transmission device which uses intoPIX technologies.