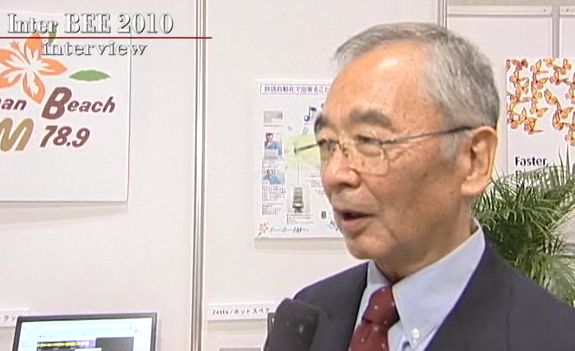 This is a video interview (in Japanese) with freelance journalist and Shonan Beach FM Chief Taro Kimura filmed in the company's booth at Inter BEE, talking about the things he is looking forward to at this year's exhibition as the broadcasting world revolutionizes itself for the digital era, and the things he would like to see with whitespace as it breaks through to the stage of real-life applications.

Taro Kimura, Freelance Journalist.
Born in 1938, in Berkley, California, USA, Kimura returned to Japan in 1941 when relations between the two countries soured. He graduated from Keio University School of Law in 1964, and joined NHK the same year. Kimura worked as a journalist at NHK's Kobe branch in the social news bureau at the station. He worked as a correspondent in Washington and Beirut from 1974, returned to Japan in February 1982, and worked as a newscaster for 6 years. When the "News Center 9" program was terminated in 1988, Kimura left NHK, and started afresh by setting up his own business as a freelance journalist. He served as a newscaster at FNN "News COM" in 1990, then at FNN News JAPAN in 1994, and as a news analyst on "FNN Super News" from 2000. Kimura was awarded the Hoso-Bunka Foundation Prize in 1986 and the 1987 Vaughan-Ueda Memorial Prize for his understanding of, and contributions to international news media.