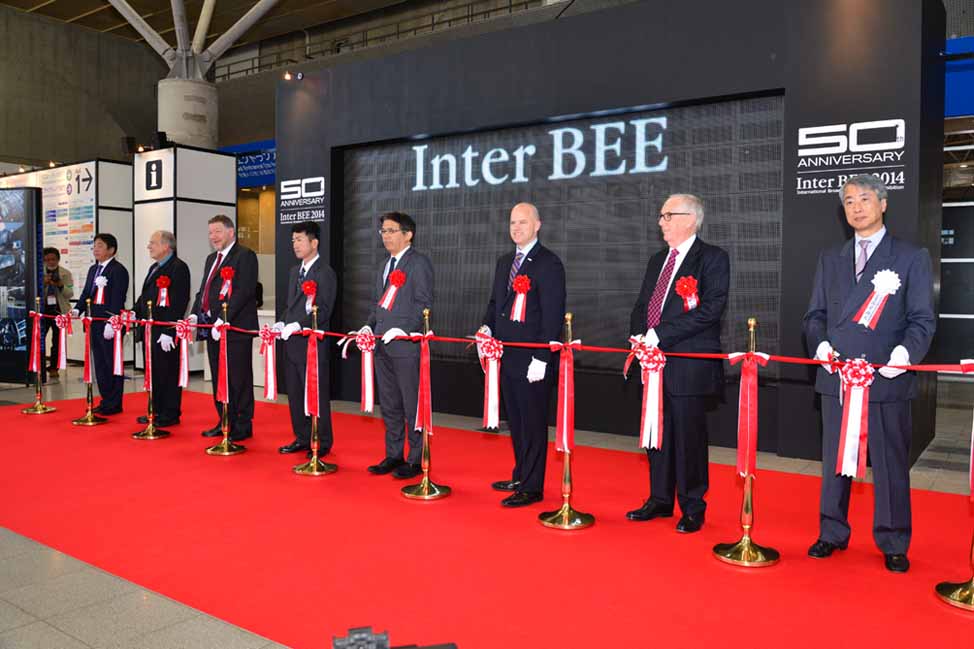 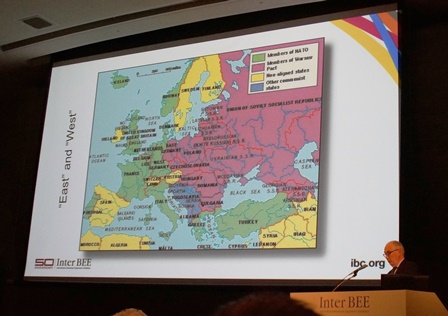 The head of the IBC gives his guest speech “The Past, Present, and Future of European Broadcasting and Broadcasting Tech 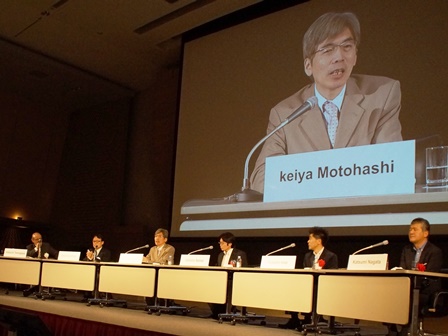 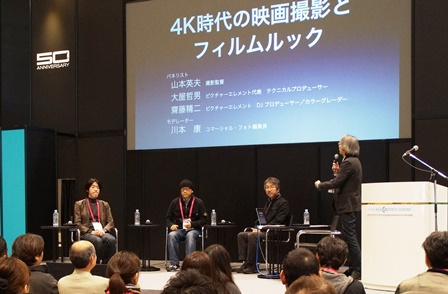 The “Asia Content Forum” was bustling for action over consecutive days. 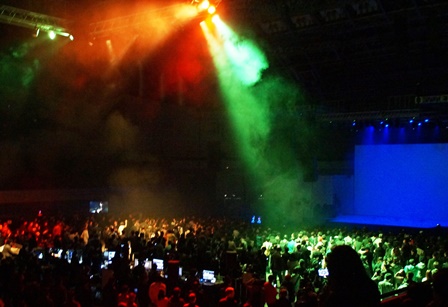 The Contest of Video, Sound, and Lighting, held at the first-of-its-kind “50th Anniversary Live Party”

The International Broadcast Equipment Exhibit, which began the year after the Tokyo Olympics were held in 1964 as part of a joint-event held together with the Commercial Broadcasting Technology Briefing Session, has now made it to its 50th anniversary. The event, known as Inter BEE 2014, has grown to become one of the world’s three major broadcast equipment exhibits along with NAB in the U.S. and Europe’s IBC, and was held this year from November 19th through the 21st at the Makuhari Messe, bringing in large crowds of visitors and participants in the process. During the event, a large variety of equipment developments were showcased, including TV cameras, video recording equipment, and other technologies to support broadcasting needs, making a great contribution to the expansion of global broadcasting media, such as satellite broadcasting, HDTV, digitized broadcasts, and much more. In addition, visitors were able to witness how, and in which direction, the industry is evolving in its switch to ultra-high-definition technologies in broadcast media, as exemplified in the recent adoption of 4K/8K, as well as the creation of hybrid broadcasts and multi-screen services through tie-ups with mobile providers.

Marking its 50th anniversary, the event continued its record of success, this year bringing in approximately 60 more exhibiting companies than last year. It achieved its highest-ever total of 977 companies and groups, requiring one more hall than last year for a total of six halls used to the full, in order to display the full array of state-of-the-art technologies and solutions aiming to expand into media. More new campaigns were unfolded than in typical years, with a diverse variety of events filling the International Conference and Event Halls. As expectations toward the 2020 Tokyo Olympics rise even further, social interest in the state of developing broadcasting, mobile, video, and sound media has also grown, leading to an increase of around 6,000 visitors over last year and a total of 37,959, the highest number of visitors in the event’s history.

The opening ceremony, which marked the beginning of the event, was held on the morning of the first day at the main entrance lobby. The ceremony featured greetings from the JEITA hosts, as well as joint appearances by the Ministry of Internal Affairs and Communications and the Ministry of Economy, Trade and Industry, with the ribbon being cut by special guests from the NAB, IBC, Brazilian Society of Television Engineering (SET), and other organizations from abroad, all of which served to open the curtains to the 50th holding of this grand event.

Following the opening ceremony, the keynote speeches were held in the International Conference Hall. NAB’s (National Association of Broadcasters) Vice President Sam Matheney joined the event as the speaker for the morning session, addressing topics such as the trajectory of next generation DTV and issues related to frequency reallocation of the specific TV broadcasting frequencies used in U.S. broadcasts, in a speech titled “Challenges in Bandwidth Allocation Faced by U.S. Broadcasters.” For the afternoon session, NHK’s Chief of Engineering Mr. Hamada focused on the current state of the hybrid broadcasts that have already begun service, as well as the 8K super-high-vision broadcasts that are planned for testing soon, as he spoke strongly about the current environment and future developments of the industry in his speech “Looking toward New Forms of Broadcasting and Media Service Developments.”

From the second to third day, experts from overseas gave six guest speeches. Peter White and Peter Bruce of IABM (International Association of Broadcasting Manufacturers) gave a speech titled “What does the future hold for broadcasting technologies?”, after which Peter Owen, chairman of the IBC, spoke on the “Past, Present, and Future of European Broadcasting and Broadcasting Technology.” Mr. Owen touched on the history of developments in the world of European Broadcasting, which has existed for more than 50 years and differs from that of the US and Japan, speaking passionately on how the European broadcasting industry has worked to meet the demands of HD and digitalization, including stories from his own experience. Finally, he talked about how he felt the industry should handle future changes in the development of broadcast media resulting from the increased sophistication and diversification of technologies.

The Video and Sound Symposiums, both with storied histories and popular each year, were held this year on day two and three of the event in the International Conference Hall. Both symposiums brought in experts working on their respective frontlines to give speeches, as well as panel discussions that allowed visitor participation as well. While both lasted for a fairly long time, visitors and participants alike were enthralled with all of the hot topics discussed. The Video Symposium was led with a speech by Mr. Tamegaya from Joshibi University of Art and Design and Mr. Kunishige from NHK Art, under the topic of “The Current State and Issues of Ultra High-definition Content Production,” touching on 4K-related topics which were the biggest highlight of this event. In relation to the 4K broadcasts which were started in June, NexTV Forum Executive Director Mr. Motohashi gave a speech titled “The Beginning of 4K Broadcasts - Expectations and Issues on our Road to 2020,” featuring discussions on the 4K test broadcasts done on Channel 4K, the state of 4K content production, as well as the roadmap and issues of future ultra-high-definition broadcasts, including 8K. There were also guest speeches from Mr. Seino of Imagica on “Key Points in Mastering the Production of 4K Content,” Mr. Imai of Nippon TV concerning “Reports from On-location 4K TV Drama Production,” and Mr. Nagata of NTT Plala on “4K Online Broadcasts: The Time Has Come – Hikari TV 4K Efforts and Issues.” Afterwards, a panel discussion featuring guest speakers and visitors was held, where a discussion by instructors was bolstered by opinions from visitors on HDR, a truly vibrant scene full of hot topics beyond that of standard years and worthy of this special event.

For the Sound Symposium, Mr. Sawaguchi from Sawaguchi Sound Studio and Mr. Kamegawa, a lecturer from the Tokyo University of the Arts, worked together to present the “Latest Trends and Applications of Audio Over IP” in accordance with the recent rise of the IP age. Speeches and panel discussions between Mr. Yoshio of Pioneer, Mr. Brulhart of Merging Technologies and others, were also featured in this symposium.

The Asia Content Forum, a popular event held each year that introduces content produced in Japan and in other Asian countries, created a new special campaign this year that brought in a huge number of participants to the open venue located in one area of Hall 6. During the JPPA (Japan Post Production Association) Day, member company Tokyo Laboratory gave a speech titled “Film for the 4K Age,” while McRAY unveiled their “Short Film Evaluating 4K’s High Frame Rate” and Omnibus Japan gave their piece dubbed “From Real-life Filming of Patlabor to Computer Graphics Creation.” All of these were joined by seven other guest speeches and presentations, featuring a total of 10 practical topics. In addition, during the MPTE (Motion Picture and Television Engineering Society of Japan) session, Quantel’s presentation on “Optimizing 4K Production through the Pablo Rio 8K Model,” as well as Cinemax’s speech on “The Multi-angle Filming Spiral Slider Dolly Katana,” were featured, totaling 14 4K/8K and file base-related speeches and demonstrations. Furthermore, as a separate aspect of the event, special guest Jeff Kleiser gave a speech on the “Future of VFX,” also introducing different film-making products, while Photography Director Hideo Yamamoto held a panel discussion titled “Movie Filming and the Look of Films in the 4K Age.”

Inter BEE is also involved in the development of skilled personnel. Under the theme of “An Introduction to 4K Video Production,” a team of instructors currently working on the frontlines of such technology held a tutorial session for young engineers, creators, students, and others that make up the next generation of people who will support the world of broadcasting and film. The “Post Production Conference,” a training event popular at the NAB, was also held, joined by the “Apple Final Cut Pro X Finishing Techniques,” a training session held by a group of top instructors working at the cutting-edge of Hollywood productions and the like.

The Commercial Broadcasting Technology Briefing Session, the launch pad for Inter BEE now celebrating its 51st anniversary this year, was held over three days in the International Conference Hall, providing a space for affiliated persons, both new and old, of commercial broadcasting stations across the country to showcase reports and announcements. This year’s special event, an annual tradition, was given the slightly sensational name of “Has the switch to file-based technology gotten rid of tape from broadcasting?”, featuring reports made by experts from key stations, as well as panel debates and discussions.

As a special event to commemorate the 50th anniversary of Inter BEE, a “50th Anniversary Live Party” was held in a circular event hall separate from the main exhibit hall from 6pm on the second day. The event attempted to bring together video, sound, lighting, and performance techniques, and was created in collaboration with Rhizomatiks, a group comprised of content creators. Before the party began, visitors could be seen forming a long line in front of the entrance, and the spacious venue was packed to the brim with swaths of visitors. This mass of people, together with the on-stage performances, artistic videos played on large screens, the massive sound bursting from speakers around the venue, and whirls of lighting that seemed to come from everywhere truly wowed everyone. For me, the event was truly a unique, surreal, other-dimensional experience, and while somewhat dazed and confused, I was able to enjoy this unique contest of video, sound, and lighting absolutely to the full.

With the move to digital techniques, the circumstances surrounding broadcasting have changed greatly, and new developments have begun to unfold. Broadcasting has continued to strengthen its tie-ups with the mobile industry, and with the spread of smartphones and tablet devices, the demands on broadcasting, as well as viewing and usage environments, have changed and diversified. As such, this year’s Inter BEE featured a truly wide variety of diverse and expansive exhibits created to match the current environment. I hope to delve further into such topics in the next installment.