Inter BEE 2015: How I saw it. [Part 1] General overview and description of individual events 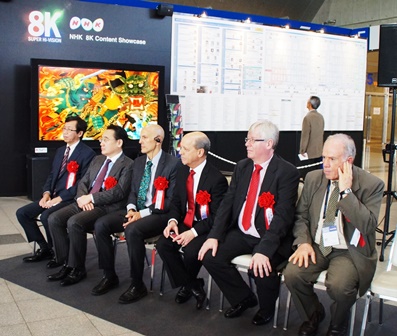 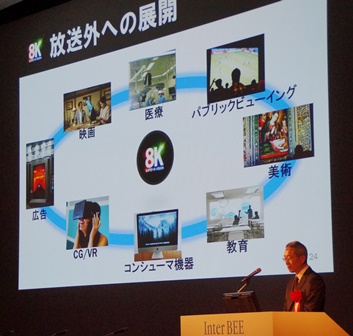 Photo 1. Keynote speech: “Future of 8K in broadcasting and its application beyond broadcasting” 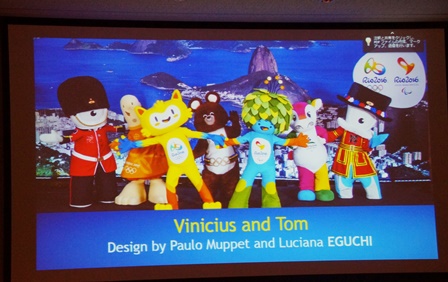 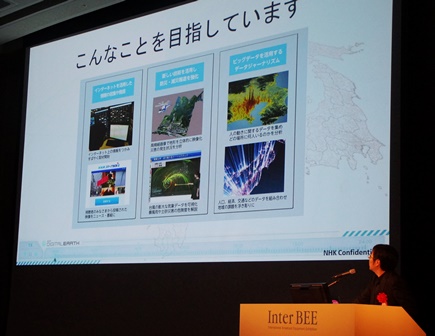 Photo 3. At the Video Symposium: “Utilization of big data in broadcasts” 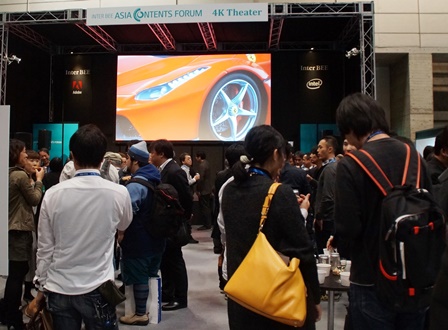 The International Broadcast Equipment Exhibition (Inter BEE) was first held in 1965, the year following the first Olympic Games in Tokyo, as a trade show for broadcasting equipment. Marking a milestone in the history of the show last year when it was held for the 50th time, Inter BEE has become a major trade show in broadcasting, matching the scales of the shows held by NAB in the United States and IBC in Europe. I offer my deepest respect to the wide-ranging contributions that Inter BEE has made over the past half-century, ranging from the development of a wide range of machines such as cameras and video tape recorders that have supported the broadcasting industry to the development of various media and technologies such as satellite broadcasting, high-definition TV, and digitalization. This year, ushering in the next half-century, Inter BEE was held successfully from November 18th through November 20th at Makuhari Messe. The advent of digital switchover has brought about a dramatic change in the conditions surrounding broadcasting, characterized by the rapid introduction of 4K and 8K ultra-high-resolution technologies and the forging of closer ties with communication technologies. The basic technologies, infrastructure, and video-viewing environment that the above developments depend on are also changing dramatically at the same time.
This year’s Inter BEE attracted slightly less visitors than did last year’s 50th anniversary version, but the number of exhibitors this year was the highest so far at 996 companies and organizations. Equipment displays were set up all the way from Hall 1 to Hall 6, and there was a hands-on demo with line array speakers in the Event Hall. Next to the hall in the outdoor parking lot, there was a demonstration of aerial drone videography, a new technological trend. Finally, in the International Conference Hall, various conferences and seminars were held. The three-day trade show offered a great chance to savor the rapidly changing and growing world of broadcast media.

Ushering in the new half-century for the trade show, the opening ceremony of the 51st Inter BEE took place at the entrance lobby where representatives from the main sponsors, JEITA, the Ministry of Internal Affairs and Communications, and the Ministry of Economy, Trade, and Industry, jointly gave the opening remarks. The trade show got underway upon completion of the ribbon-cutting ceremony, which was held in the presence of a crowd that included guests from overseas, such as those from NAB, IABM, and the Brazilian Society of Television Engineering. During the ceremony, large displays that had been set up on the left and right of the main stage showed video clips using 4K and 8K ultra-high-definition technologies, which were the highlight of this year’s show. The 4K video clip was a test broadcast from “Channel 4K,” which is operated by the Next Generation Television & Broadcasting Promotion Forum (NexTV-Forum), and the ultra-high-definition 8K clips featured a Wimbledon tennis broadcast by NHK and Aomori’s Nebuta Festival. The videos impressed the many visitors who saw them.
Then, there were two keynote speeches at the International Conference Hall. The first was titled “A 2015 roadmap for future 4K and 8K projects” and was given by Deputy Director-General Yoshida from the Ministry of Internal Affairs and Communications who talked about Japan’s policies for next-generation broadcasting under the subtitle, “The latest developments in Japan’s broadcasting policy.” This was followed by Chief Engineer Hamada from NHK who gave his speech on "The future of 8K in broadcasting and its application beyond broadcasting." In summary, he reported on preparations that were being made for 8K test broadcasts planned to start next year in time for the 2020 Tokyo Olympic and Paralympic Games and voiced his expectations of potential contribution by the broadcasting industry in the development of other industries by applying the highly advanced features of 8K technology to areas as diverse as medicine, film, digital signage and advertising, public viewing, and museums. There were further presentations on the latest progress in 4K broadcasting and distribution: “Our operations in 4K broadcasting” by SKY Perfect JSAT, “Deployment of 4K IPTV service through Hikari TV” by NTT Plala, and “4K technology in cable TV” by Jupiter Telecommunications.
The final speech of the morning was given by NexTV-Forum Executive Director Motohashi, who, according to the title of “A roadmap for 4K and 8K: what lies beyond them,” spoke on plans for test broadcasts in 2016 and the subsequent full rollout in 2018 and presented some challenges and issues that could be encountered further in the future. A couple of the questions he raised were “Shouldn’t we be thinking beyond TV channel allocation plans for the 2016 test broadcasts and 2018 rollout?” and “Shouldn’t we be thinking beyond satellite broadcasting or broadcasting altogether?” Moreover, he talked about various technical developments in more detail: wide color gamut, high-dynamic-range imaging (HDR), development of highly efficient compression technology (HEVC) for superb image quality, and fast post-production and low-cost archiving for more efficient production. Mr. Motohashi also called for not only discussions on technological and policy-related matters but also discussions to drive more development in creative work and more rigorous video journalism. He concluded by advocating “development of a new broadcasting culture and a new video culture by utilizing the cutting-edge technology that Japan has already created.”
Because all the talks were on big themes that relate to the present and future of broadcast media, the lecture room was packed full of people to the brim, and large numbers of people also crowded the space in front of the large screen that had been set up in the lobby outside the room. People’s expectations for broadcast media’s future development and the energy of producers and technicians could be unmistakably felt.

The keynote speech in the afternoon was given by a senior figure from a major private broadcasting company based in Tokyo and was titled “Launch of TVer, the official portal to commercial broadcasts: thoughts on the future of video distribution.” The Special Lecture event was on the topical issue of the “My Number” system and was titled “Contemplating next-generation television broadcasting service in the ‘My Number’ era.” In addition to a talk that was given by the governor of Tokushima Prefecture, Mr. Iizumi, a panel discussion was held, featuring the chairman of NexTV-Forum, Mr. Sudo, and the Head of the Division of Information and Communications Policy at the Ministry of Internal Affairs and Information, Mr. Ogasawara, among others.
In the conference room on the first floor of the same building, an invited session called "Special Forum" was being held by the Brazilian Society of Television Engineering, which works with the Institute of Image Information and Television Engineers (ITE) in the operation of ISDB-T. At this forum, there was a talk called “Outlook for the Rio 2016 Olympics,” which reported on the preparations made so far and the challenges that remain leading up to the Olympics in Rio de Janeiro next year. This was followed by the speeches, “The end of analog TV in Brazil” and “The past and future of broadcasters in Latin America,” before Professor Marcelo from the University of Sao Paulo gave a talk titled “Interoperability of the interactive digital TV system.” Owing to the themes that pertained to the forthcoming Olympic Games in Tokyo and the close ties that Japan enjoys with the Brazilian media, the talks were attended by an enthusiastic crowd that was close to a full house.

The second day of Inter BEE saw the Video Symposium and the Audio Symposium being met with success as in previous years. The Video Symposium was co-chaired by Mr. Tamegaya, who is a council member at Joshibi University of Art and Design, and Mr. Kunishige, who is Managing Director at NHK Art, and it was arranged around the central theme of “New trends in content production: the impact of big-data visualization.” The talks given were: “Examples of social media-based big-data research and visualization at NICT,” “Piecing data together for society” by Tokyo Metropolitan University, “The present and potential future development in the utilization of big data in broadcasts” by NHK, and “Challenges in the development of data visualization systems.” The talks demonstrated that the utilization of big data has enabled applications of video visualization that were hitherto not possible, such as visualizing the contamination in a nuclear disaster, predicting hurricane tracks, and creating weather forecasts. One of the speakers provided some direction for future work: “We need to think about how to best use the Internet and gather and distribute information through broadcasts, we need to improve our disaster news coverage by leveraging new technologies, and we need to think about how to best use big data for data journalism and other applications.”

The ICT/Cross-Media Area in Hall 6 was used to set up a theater space with a 4K display. The venue hosted numerous events presenting various types of content and talks on exciting topics, and it attracted large crowds throughout the course of the trade show. A highlight of the first day was a demo by Adobe using its cloud-based video production tool. On the second day, “JPPA Day” was hosted by the Japan Post Production Association, and there were talks and presentations on current hot topics, such as “HDR images and test images” by Imagica, “4K HFR and HDR workflows” by Ray, and “4K video production solutions” by Panasonic. In the evening, many creators and engineers gathered to attend a mixer called “Production & Creator’s Night,” which attracted so many people that not all participants could get inside.

Broadcast and communication media are going through a period of dramatic transformation. This transformation is brought about in large part by the 4K and 8K ultra-high-definition technologies, the increase in spatial information, high-frame-rate (HFR) data transmission capabilities, the increased ability to display color by storing a wider range of color values (e.g., BT.2020), and the ability to simultaneously capture contrasting levels of luminosity through the expansion of dynamic range (HDR—a major recent topic). The increase in data volume is accompanied by the development of highly efficient coding technology enabling improved compression and good image quality, which in turn provides the basis for a transition to more file-based and IP-based production, distribution, and transmission systems. These technology trends seen at this year’s exhibition will be elaborated on in forthcoming publications.