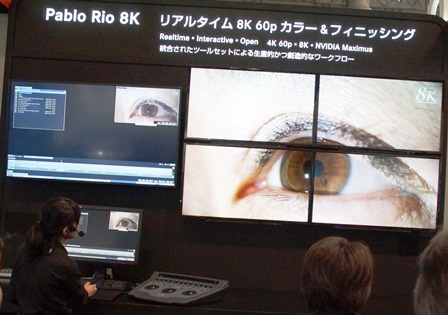 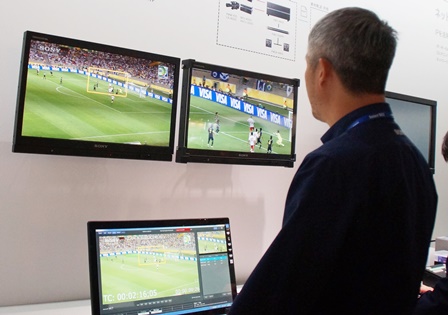 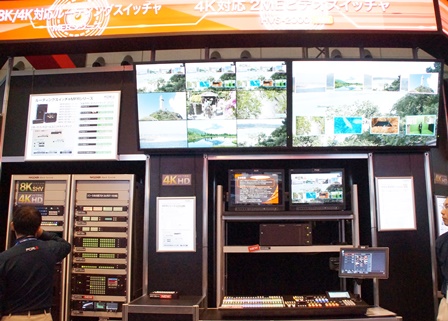 Exhibition of a variety of 4K enabled devices (FOR-A) 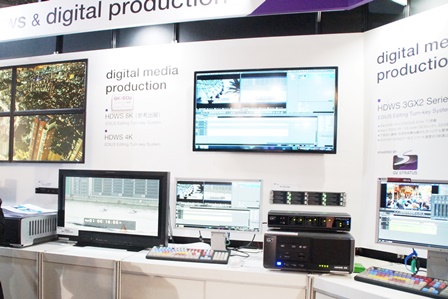 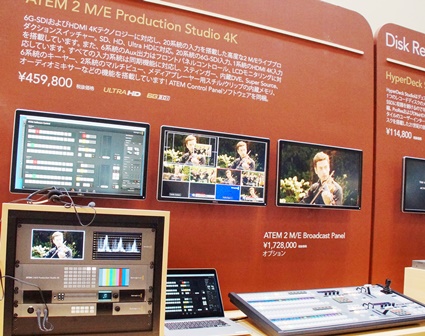 In Part 2, I wrote about a wide variety of 4K/8K cameras, and high-sensitivity/high-speed cameras. In this part (Part 3), I would like to give an overview of content production systems, which are seeing tremendous progress regarding high-image quality, high-functionality, and the conversion to file-based systems.

Quantel, which leads the global content production industry and is always working on the cutting edge of technology, revealed their 4K/60p and 8K/24p editing and manipulation processing systems, which utilize the "Pablo Rio" high-quality color and finishing system at the NAB 2014. In addition, they connected the "Genetic Engineering 2" server, which can share multiple jobs and footage first revealed at IBC, to two "Pablo Rio 4K" devices to use 4K/60p footage from multiple projects, and demonstrate powerful and creative editing work. By using GE2, they increased system availability and improved the efficiency of production work. In addition, the highly anticipated real-time 8K/60p work was on display. With 8K, there is unbelievably high performance and stress-free editing, and the appearance of production work and the created 8K content are displayed on a high definition 8K monitor. In the future, full-fledged processing and editing of 8K videos are expected to make significant progress. Another attention-grabbing exhibition was the "Live Touch" sports highlight system that was demonstrated using footage from a basketball game. It can record highlights on the fly, edit footage recorded to the server while playing slow motion, and offers immediate playback as soon as the live event finishes.

Autodesk presented production samples of their "Flame Premium 2015" video finishing set; a package of visual effects, edits, and color grading. The new version has grown more powerful, with Dual GPU support and 4K support with improved functionality, and is equipped with new tracking tools. Efficiency for complicated and high-resolution work has been vastly improved, with better functionality for the powerful "Smoke 2015" post-production solution, and efficient new tools and acceleration for the "3ds Max 2015" modelling, along with rendering solutions for games, movies, and motion graphics.
Avid's next step after its former theme "Avid Everywhere," is "Resolution Independence," which enables support for 4K high resolution media for multiple products, using existing storage and network environments. "Media Composer," which now supports 4K, demonstrated 4K/60p importing, editing, and exporting. Their products were also exhibited by several partners, including Ikegami Tsushinki, Hoei Sangyo, and Photron.

As a 4K live production system, Sony exhibited its 4K/HD live server, which employs a 4K switcher and XAVC format, and enables HD video cutting from 4K, 4K recording, and video-chasing playback. As file-based solutions and in addition to the "Sonaps" editing system that supports press workflow, the XAVC base was introduced, offering higher quality and greater efficiency for the new workflow of TV programs and commercials. They also exhibited a content management solution indispensable for workflow, and an archive system that utilizes optical discs. In addition, they exhibited a compact 4K memory player for easy playback of 4K/60p XAVC video to support rapidly progressing 4K production.
Panasonic put together a next-generation studio subsystem and exhibited a variety of solutions, including network support products and high-speed high-efficiency file-based workflows. The new 4ME/3ME live video switcher at its core supports 3G/4K, up to 72 inputs and 42 outputs, and frame synchronizers for all inputs. It is equipped with a color corrector, and is suitable for large-scale programs with its scalability and high dependability.
Ikegami Tsushinki exhibited a 4K-enabled multi-platform series as a switcher system. The system can be scaled up by combining units. It has up to 144 inputs and outputs, a frame synchronizer equipped with a process module, 3G/HD/SD signal converter, color corrector, and split-screen function, and supports 4K with 4M/E interconnectivity. They also revealed their "iSTEP+" total solution as a file-based system, which has file-based recording and delivery systems, links with file-based footage and press support systems, allows interconnectivity with existing switchers, and supports chase editing during recording sessions.

FOR-A exhibited powerful production equipment to support the 4K era. Their switcher system is a highly expandable 2M/E switcher that supports multi-platform 4K/HD is equipped with a variety of 4K enabled features and is designed for use at sports events, news subs, studio-produced subs, and other events. They also exhibited the core of the system, their MFR series routing switcher that flexibly supports 4K/8K. Additionally, in response to the IP era, they revealed their IP changeover switcher that continuously monitors IP signals from dual systems exported from the same encoder, and seamlessly restores and transfers those signals to other operators when there are problems. For processor systems offering advanced signal processing, they exhibited an HD to 4K up-converter with high resolution imaging through time and space interpolation in real-time, and a 5-system up/down/cross conversion system equipped with a frame rate converter that supports 4K/HD/SD, a color corrector, and FS functionality. For a file-based solution, they displayed their "Media Concierge," which has a high degree of freedom as a production support system and incorporates a new style of data management through hierarchical cloud management.
Astro Design exhibited solutions and equipment effective for a variety of 4K/8K content production systems, such as a cross converter that can effortlessly handle 8K/4K/2K, a color gamut conversion device that supports BT.2020, and a 4K waveform monitor. In addition, with regards to next-generation transmission scheme codecs, they exhibited an MMT signal generator developed in collaboration with NHK that enables MMT multiplex stream recording and playback, as well as simple stream analysis, and can be used for stem verification and MMT-related equipment development.
Keisoku Giken revealed technology that naturally and realistically improves the resolution and sensitivity of video footage when converting it from HD to 4K and from 4K to 8K by utilizing ultra high resolution technology that employs the Frequency Expand (FE) method. This method differs from conventional edge-enhancing image quality enhancement processing in that it restores frequency components that do not exist in the original footage with in-frame nonlinear signal processing. It is a solution that further expands the usage range of 4K and 8K.

Grass Valley exhibited a variety of equipment and solutions to meet the needs of the digital age. Their switcher system enables 4K production support without requiring additional optional hardware and software by employing a modular process engine and combining a new 3G-enabled switcher frame and middle range switcher, and using M/E row splitting to utilize interconnected functionality. The EDIUS 7 non-linear editing system has evolved to become native 64 bit, and is equipped with a 4K processing engine, as well as new features supporting AVC-Ultra and XAVC to enable free 4K/60p editing. In addition, the EDIUS turnkey system added 4K support to enable the effortless construction of 4K production environments. They also had a reference exhibit of models with 8K/60p support.
Blackmagic Design also exhibited a variety of equipment, the most attention-grabbing of which was the "2M/E Studio 4K" ATEME switcher, which supports 4K. It is equipped with 6G SDI and 4K HDMI, as well as SD/HD/U HD resolution. It enables real-time high-quality transitions and a variety of effects such as Chromakey, Wipes, and DVE. They also exhibited a new 15.6" rack-mounted smart view 4K monitor that is inexpensive, supports SD, HD, and U HD/60p, and is equipped with a 12G-SDI input and a multi-monitor that can handle16 systems of different resolutions up to 4K with an easily adjustable screen configuration.
At the Adobe Systems/Intel joint booth, crowds gathered to watch a presentation and large-screen demonstration of the "Adobe Premiere Pro CC," which natively supports a variety of file formats, has enhanced 4K production, and boasts the industry's best performance.