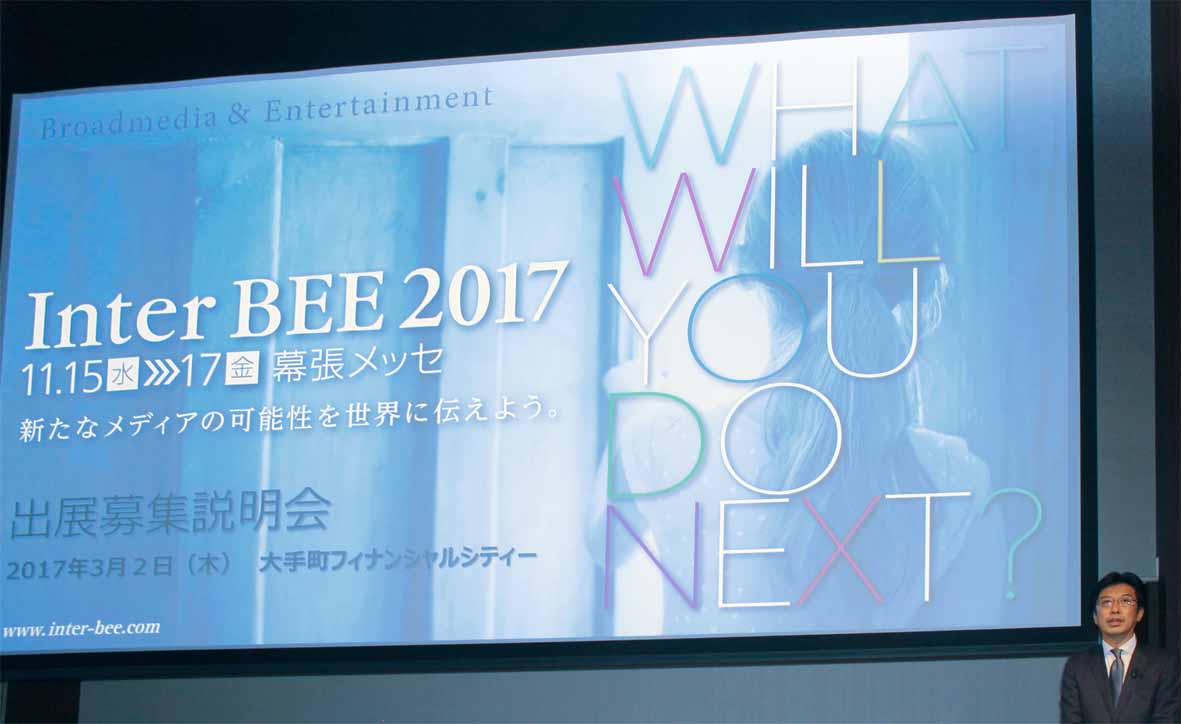 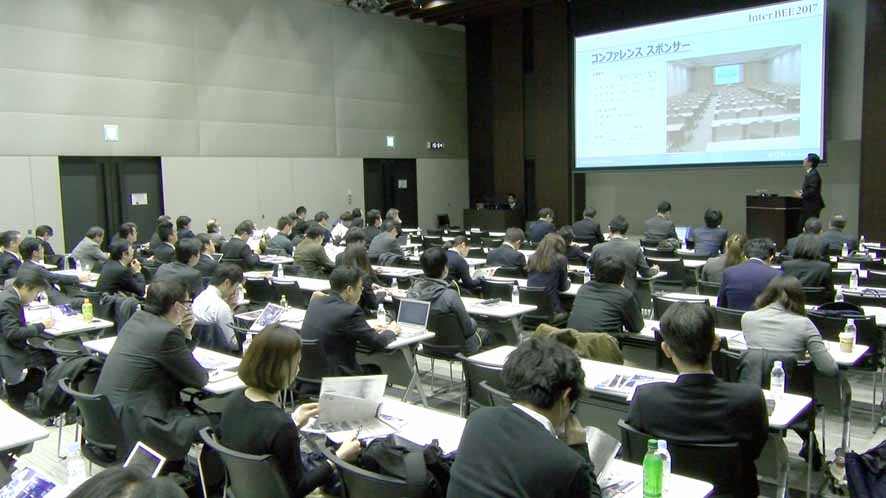 Over 150 representatives from companies interesting in exhibiting attended 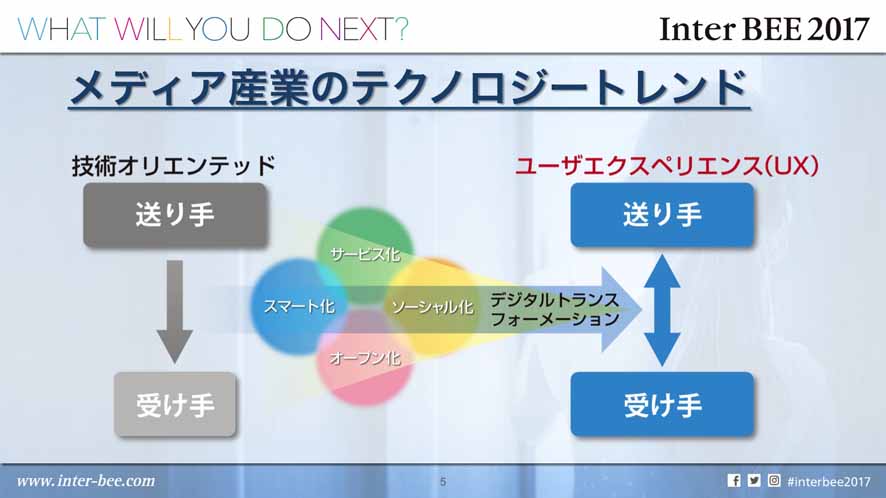 Technology trends in the media industry 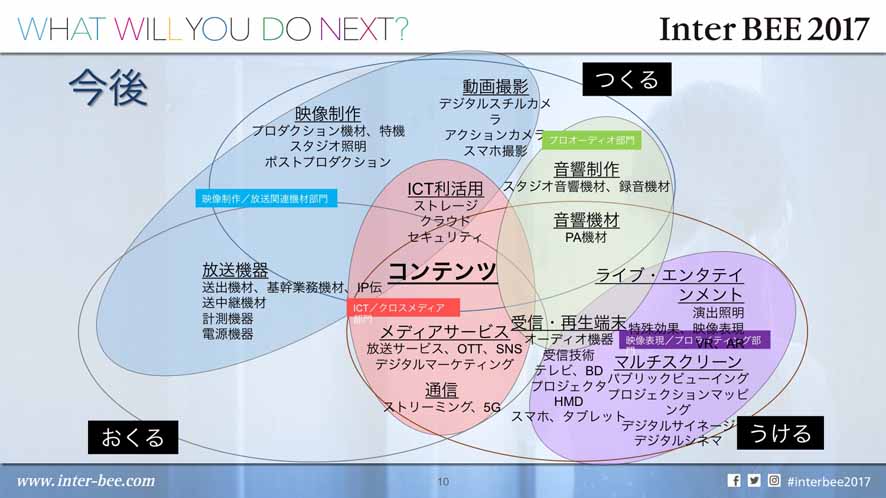 Content comprised of Make, Send and Receive at its core 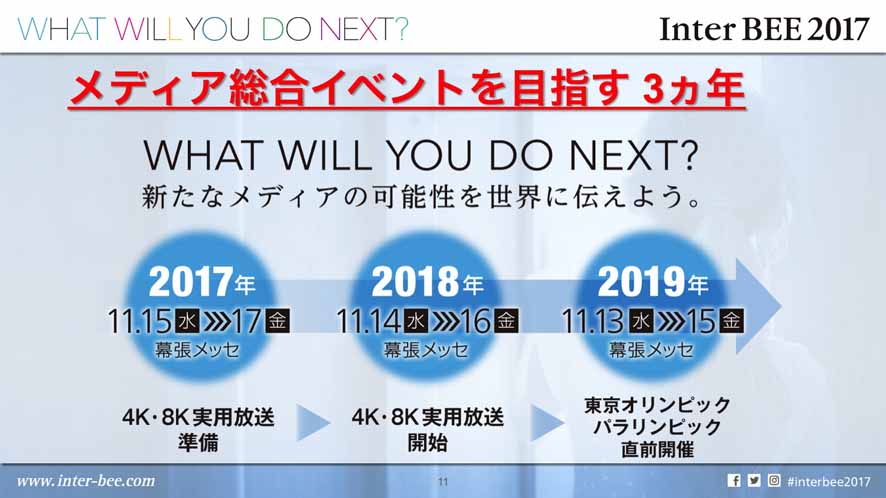 The event dates for every year through 2019 have been set. Emphasizing stable implementation

On Thursday, March 2, an exhibitor recruitment info session was held in Otemachi, Tokyo, aimed toward companies interested in exhibiting at Inter BEE 2017.
Inter BEE 2017 will be held this year over the three days from Wednesday, November 15 to Friday, November 17. In addition to the exhibition overview, the exhibitor recruitment info session mapped out the next three years as a critical juncture in the run-up to 2020, explained action policies for attracting the most attendees ever, and featured lectures on the latest trends from three experts in the broadcasting and video recording industry. Here, we will report on the info session and the three lectures featured therein.
This being its first time, a lecture was held at the start of the info session to explain Inter BEE's action policies for the run-up to 2020.

■ Make, Send, Receive: Making Inter BEE a total event that encompasses the three components of media
At the start of the info session, Yoshinori Ishizaki, the Inter BEE Project Manager for the Japan Electronics Show Association, said the following in his opening remarks.
"Up until now, the core of media - particularly mass media - has been a one-way flow from sender to receiver. But with the spread in recent years of smart technology, servicification, open data, and social media, the digital revolution has extended even to the media industry. As receivers and senders have come to operate mutually, the 'user experience' has grown ever more important."
Ishizaki explained that, "In such circumstances, reviewing the basic policies of Inter BEE, I placed content front and center, thinking that the event should include the media components for what kind of content is made, how it is made and for who, and how it is delivered and viewed or experienced." Saying this, he positioned Make, Send, and Receive as the "three components of media."
Next, he showed a diagram surrounded by the three ellipses of Make, Send, and Receive. Each circle showed a different area of media: the Make area incorporated the entirety of content production, the Send area included transmission, dissemination, and distribution of data, etc.; and the Receive area included various viewing forms and ways to display content.
Laying out the Inter BEE categories and product services made in response to these areas, he introduced the changes in content expansion over the past few years.
As the Video- and Broadcast-related Equipment category and Pro Audio category were for many years the exhibitions that promoted the production and distribution of content, the process for expanding Inter BEE's domain, such as by newly adding the Video Expression/Pro Lighting category and ICT/Cross-media category, was also introduced.
Ishizaki continued even further, and expressed his ambitions by saying, "From here on out we're going to expand even more, including all the components of Make, Send, and Receive, and over the next three years will steadily improve to become a 'total media event.'"

■Maintaining the three-year program and preparing to steadily carry it out
Expressing his desire to carry out the three-year program, Ishizaki shared that he had already secured the dates for three years of Inter BEE: November 15-17, 2017; November 14-16, 2018; and November 13-15, 2019. While there will be some periods where exhibition and event space is lacking due to major sporting events, etc., Ishizaki stressed that preparations are moving forward for Inter BEE's steady implementation.
The lectures that followed were led by experts on each component - Make, Send, and Receive - with each of them taking the stage and explaining the latest trends regarding their topic.
(That's all for now, to be continued in part 2)