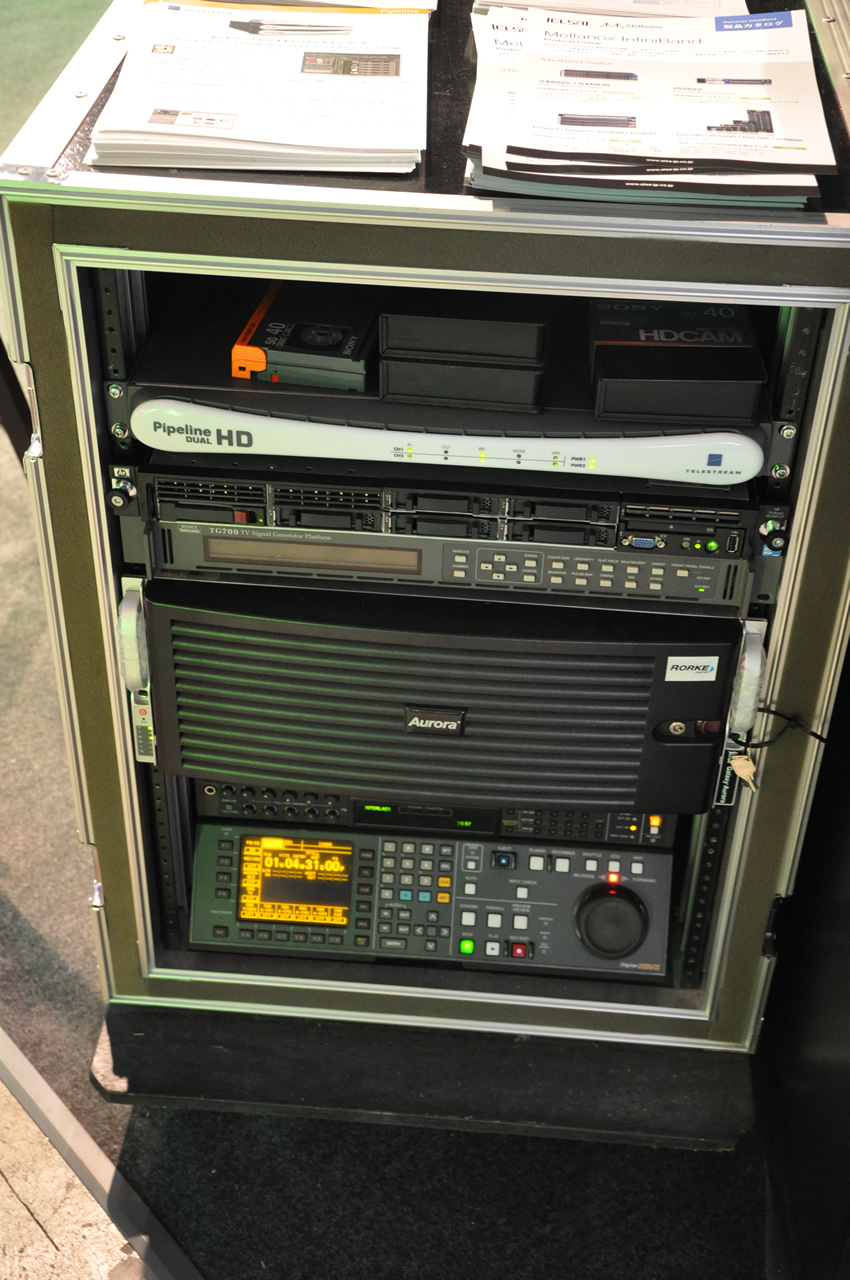 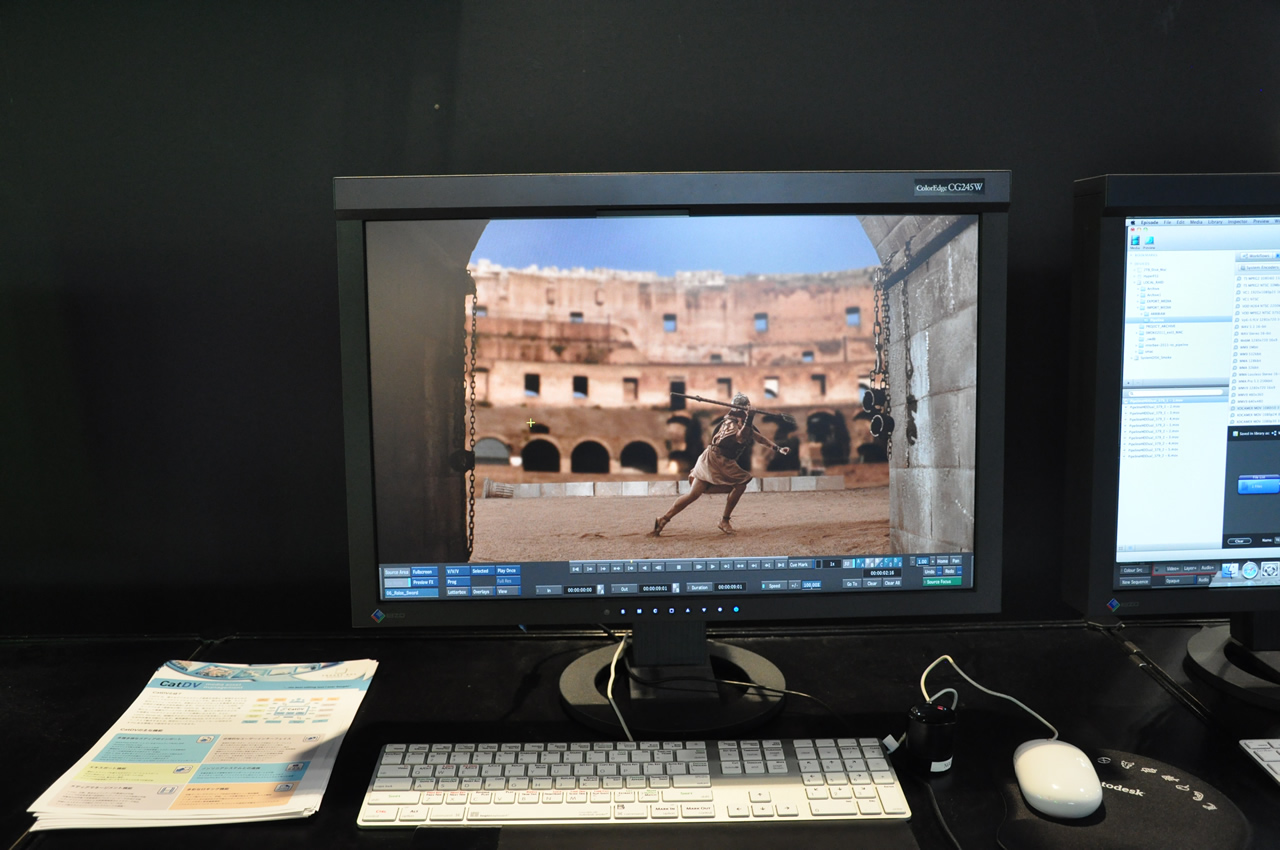 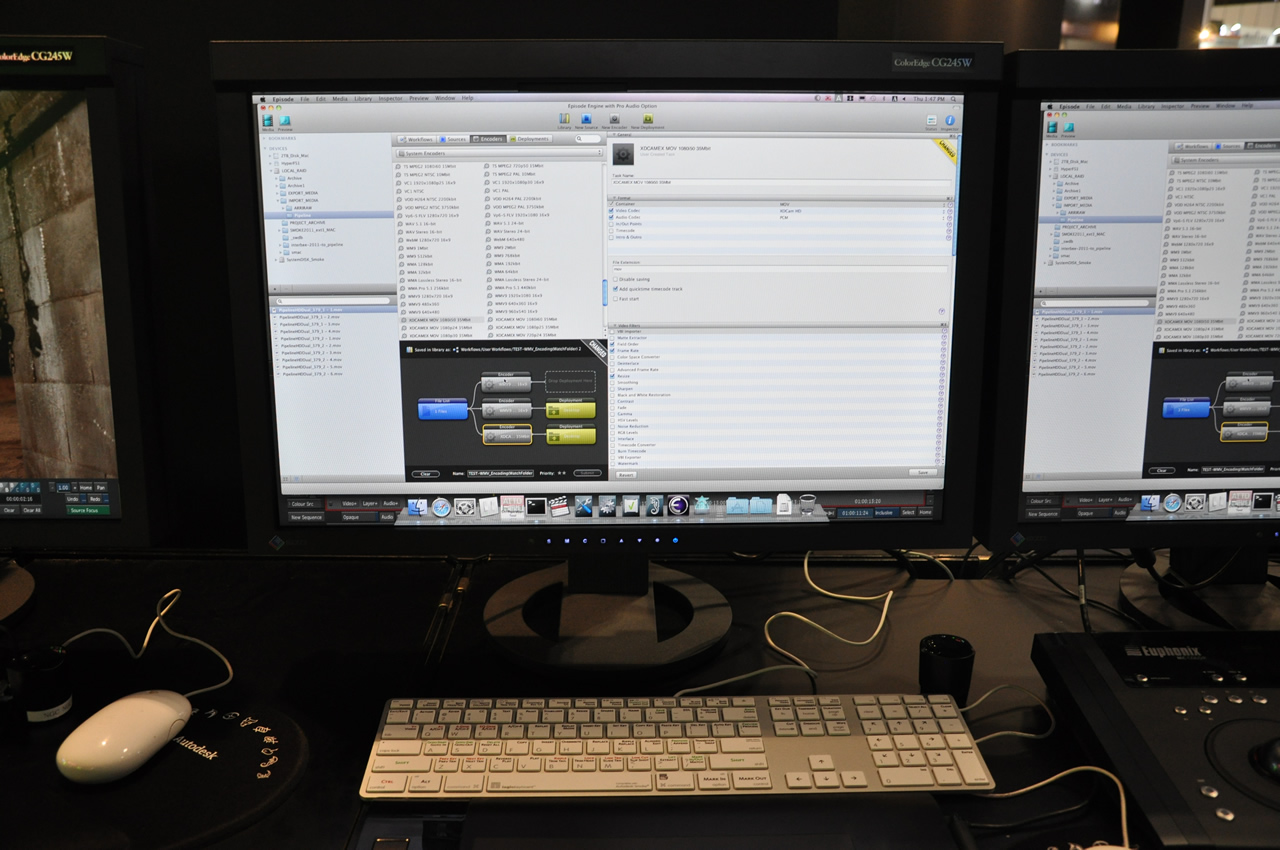 NGC exhibited Telestream's network video capture and encoder, "Pipeline", and the "Episode 6" multi-format encoding software. The company also exhibited Autodesk's "Autodesk Smoke for Mac 2012". At the NGC booth, "Pipeline" was used to save video contents captured by ProRess 422 in Rorke Data's RAID 6 storage "Galasy Aurora (used as SAN (Storage Area Network))", and the workflow to edit it in "Autodesk Smoke for Mac 2012" was introduced.

■ Allows for editing or transcoding during video capture

Telestream's "Pipeline" network video capture and encoder encodes SD/HD video and audio materials into various kinds of file formats, and can connect to a Mac or PC via a network to edit or transcode media files being captured. It can also perform live source ingest by scheduling functions, log and capture from tapes, crash recording that can also detect timecode breaks, and automatic capture by remote control using simple Web API. Hideaki Fukui of the BSI Department's Technical Support Section explained that "editing can be carried out simultaneously from 3 Macs connected to a network".

The video editing finishing tool, "Autodesk Smoke for Mac OS X 2012", is the latest version of this Mac OS software and was only released the month before Inter BEE 2011. Its features include compatibility with the main codecs such as Apple ProRes 422, Panasonic P2 HD, Sony XDCAM HD. Also, unlike Final Cut Pro, the burdensome task of changing formats can be avoided and it can perform color collection. In addition, it includes tools that support stereoscopic 3D (S3D) project finishing, and allows for high-speed processing, such as 3D synthesizing, by making full use of the GPU.

Mr. Fukui also explained that "using shapes with the synthesis tool to clip necessary areas allows the background chroma key to be easily removed, and it is equipped with lens flare as a standard feature". He went on to say that "with the system checker, users can check whether their Mac fulfills the necessary system requirements."

"Episode 6" is a multi-format encoding software that offers one-click clustering, which can be easily shared between a combination of multiple PCs and Macs. Its defining feature is the "Split-and-Stitch" function that automatically splits media files for encoding and then stitches split segments after parallel encoding them by multiple nodes. It then generates a single encoded file. Mr. Fukui explained that "transcoding long contents with a single PC is time-consuming, so splitting files and encoding them divides the task and reduces time."