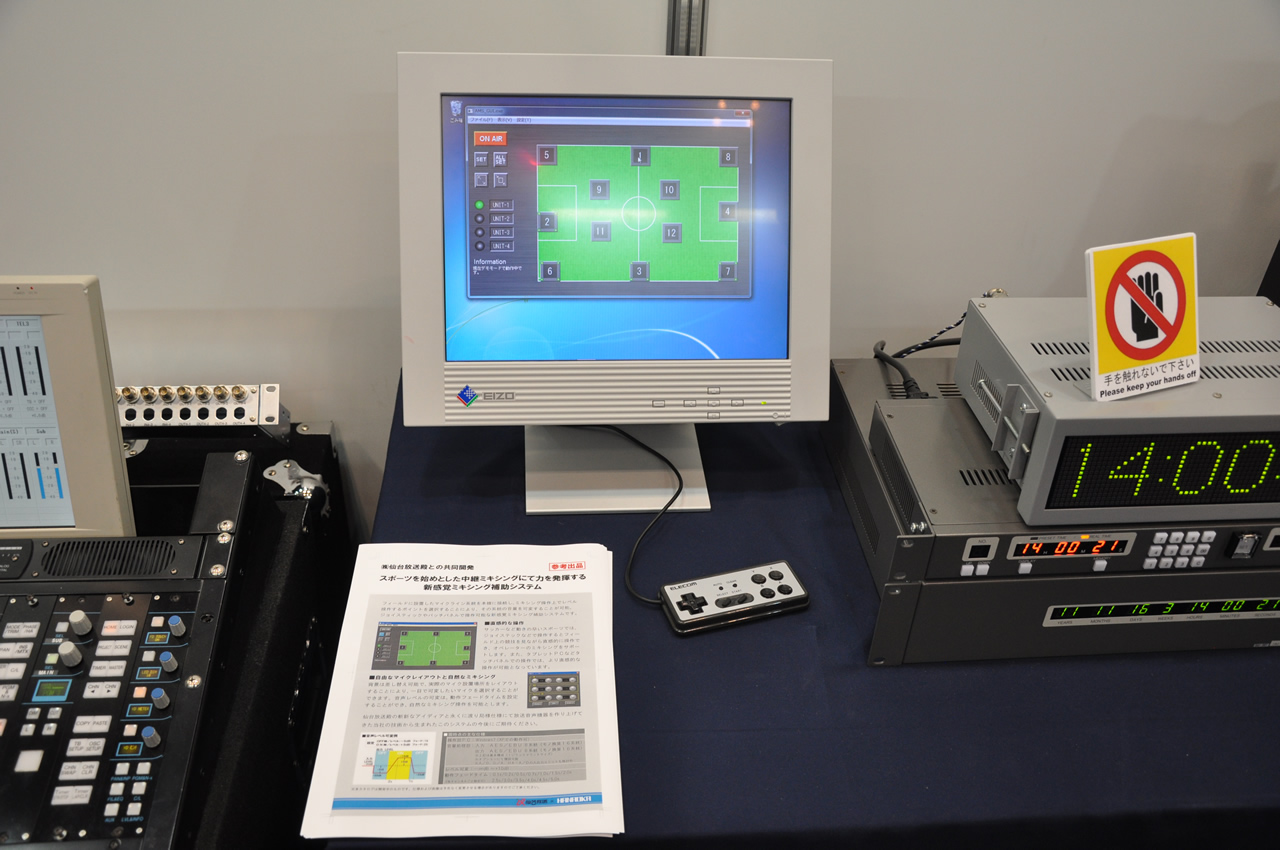 Hanaoka Musen Denki exhibited "HiFiREVERB ENCODER", a sound encoder utilizing reverberation control technology, and held a demonstration at the firm's booth by reproducing a mock recording/broadcasting studio setting. It also demonstrated a new-type mixing aid system it co-developed with Sendai Television, which is expected to be used for sports broadcasts.

■ Demonstration of "HiFiREVERB ENCODER" with system configurations based on actual usage

Demonstrations allowing visitors to hear HiFiREVERB ENCODER's 5.1ch surround sound were held at the firm's booth by reproducing a mock recording/broadcasting studio setting. HiFiREVERB ENCODER was used to demonstrate removal of reverberation from recorded sound and to input 2ch sound source. Company President and CEO, Katsumi Hanaoka said, "I'd like everyone to experience the advantages of HiFiREVERB ENCODER, and holding demonstrations in a studio-like setting is the best way to do that".

Speaking about the reaction to this demonstration, President Hanaoka said "a lot of people who actually came to the booth said that they would like to use it to make hall-recorded speeches much easier to listen to by separating direct sound by reverberation control technology and decreasing reverberation components". He added, "creating 5.1ch surround sound from 2ch cannot be demonstrated very well at this venue because of the peripheral noise, so we are planning to let those interested experience it in a more relaxed setting in the company."

Hanaoka Musen Denki demonstrated a new-type mixing aid system it co-developed with Sendai Television, which is expected to be used for sports broadcasts. With this system, a mic/line system installed in a sports venue such as a stadium is connected to this device, and the screen then displays a background image, such as a soccer pitch or stadium, and buttons for a microphone layout positioned right in the background image. The volume of these microphones can be controlled by a joystick and touch panel. For example, President Hanaoka says "a feature of this system is that it can be operated intuitively while watching the game. When a camera films a goal, the microphone installed near the goal is turned ON/OFF by button operation."

In addition, replacing the background image and changing the microphone installation layout can be carried out flexibly. As President Hanaoka explained: "in the case of a variety TV show where celebrities are sitting on a tiered platform, microphones placed in the tiered platform can be easily turned ON/OFF in response to the celebrities' chat". Also, because button images differ according to where microphones are placed, "a photograph of someone's face can be used for a button."