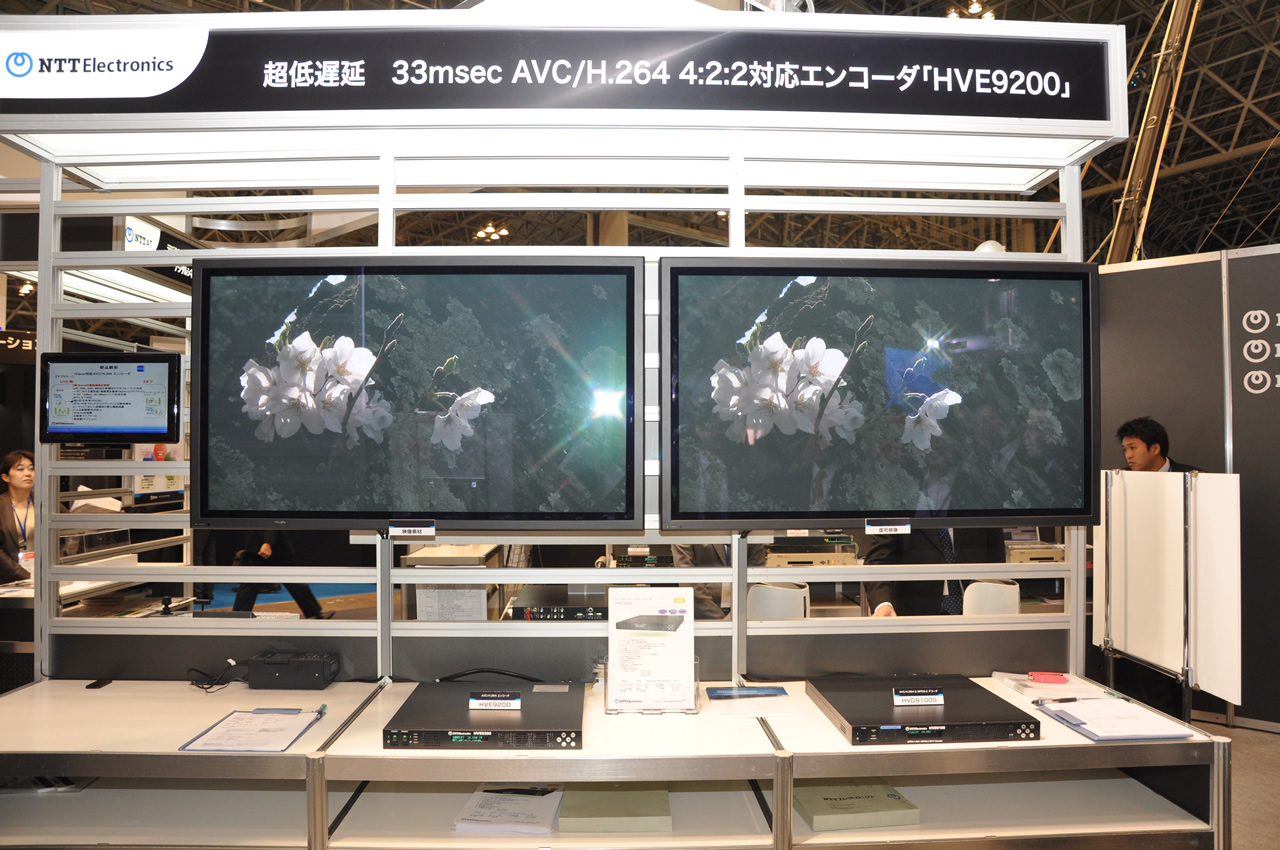 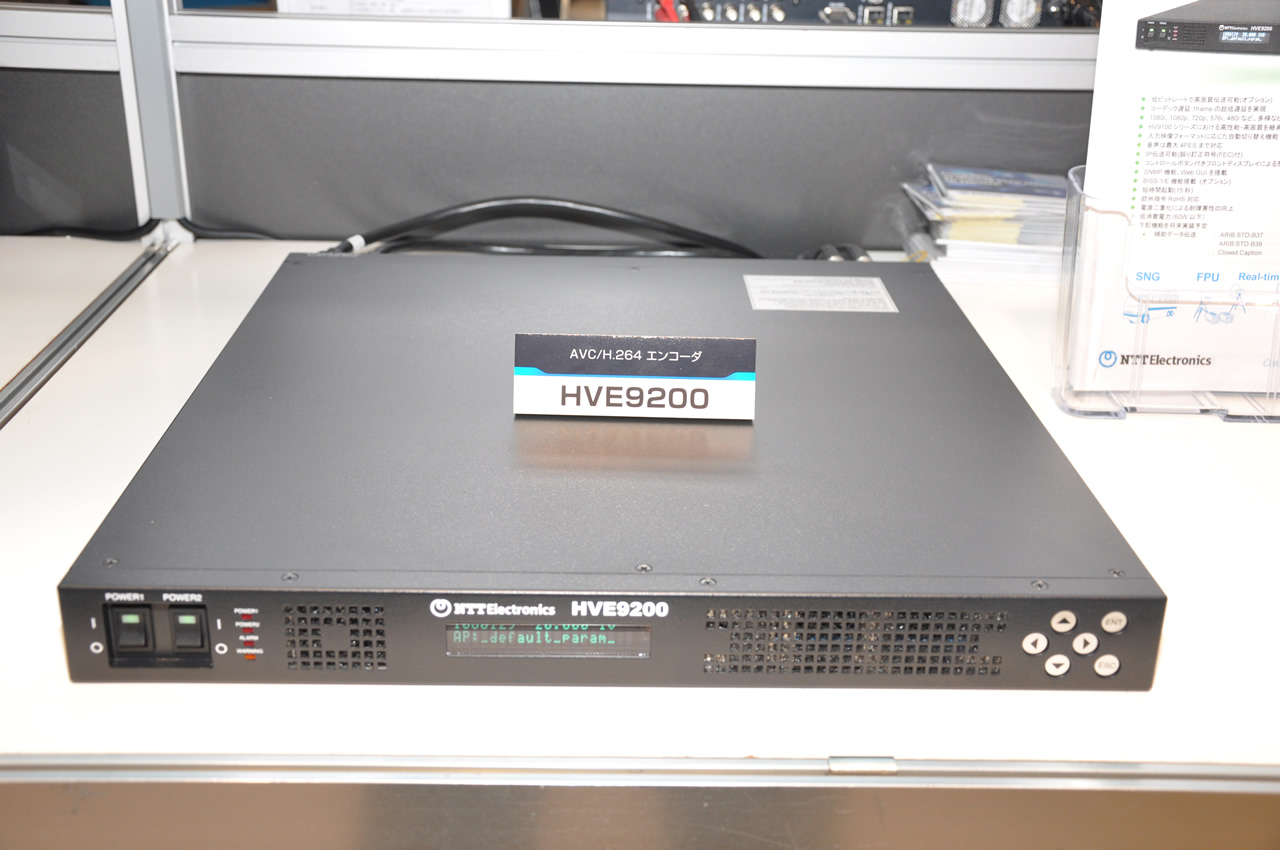 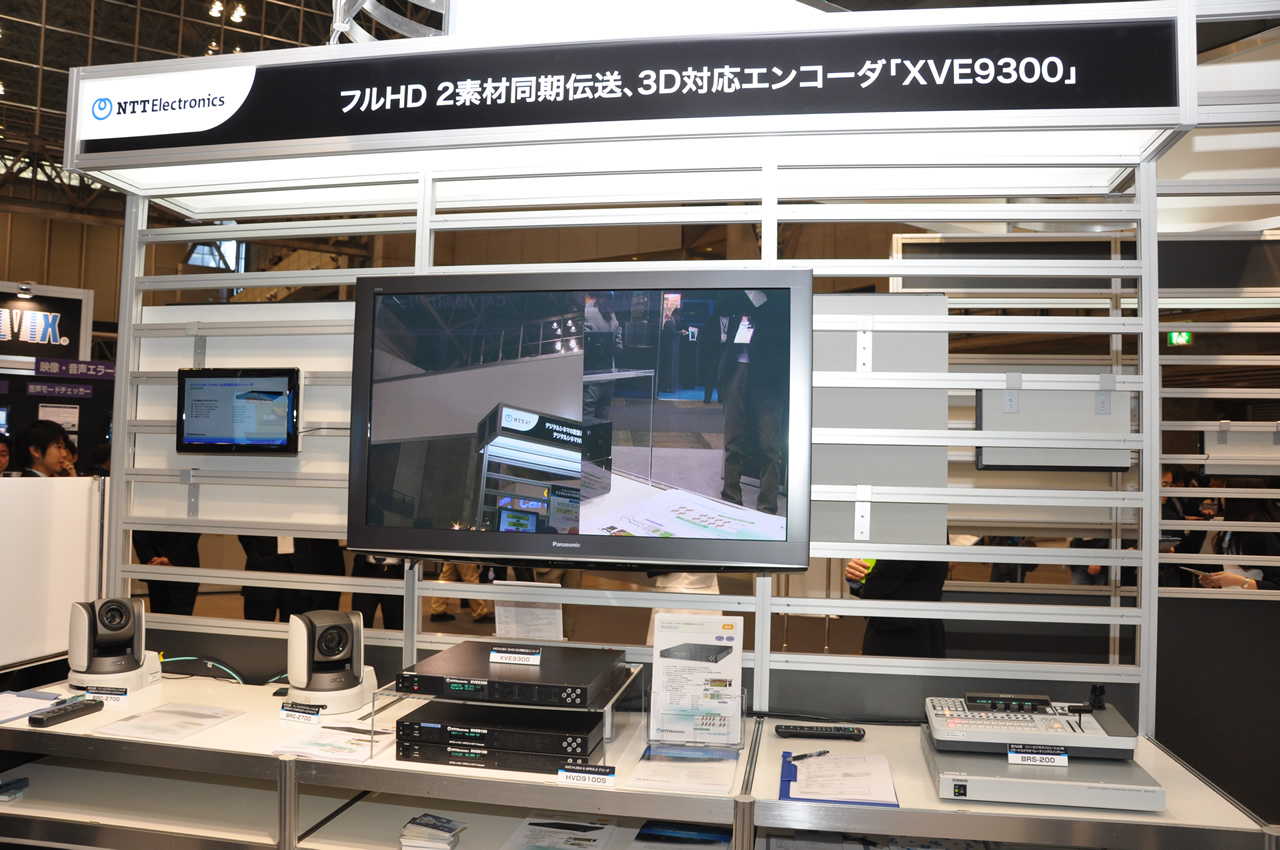 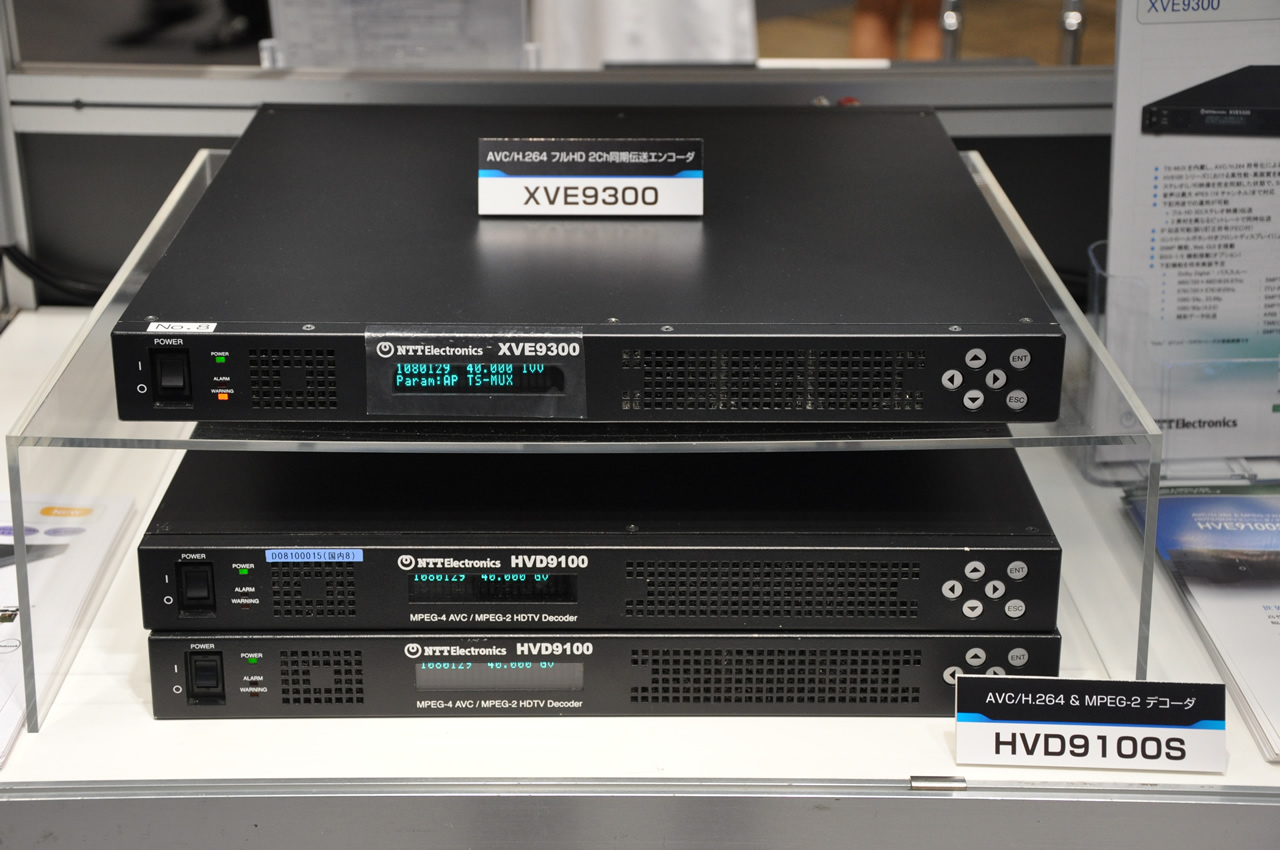 ■First exhibition of "HVE9200", the ultra-low latency updated AVC/H.264 encoder, with one frame shorter delay time than before

The "HVE9200" is an AVC/H.264 encoder with all the high resolution, functionality, and stability of its predecessor, the "HV9100 Series", but with improved short latency and low bit rate. The strengths of the HVE9200 are its low bit rate high image quality, low power consumption, and dual power supply.

More specifically, with the previous AVC/H.264 compatible HDTV/SDTV encoder/decoder "HV9100 Series" the delay time was within three frames, but this new product can use intraframe compression thanks to the new LSI. As a result, it boasts a shortened delay of as little as 33 msec - the space of one frame. Further, the supported bit rate for encoding is from 3Mbp to 80Mbps. Mr. Keisho Yoda, head of the Sales and Marketing Division, No. 1 System Sales Department explained, "we want users to use it for high quality image transmission in relays that require immediacy and for data transmission between cable stations".

NTT Electronics performed a side-by-side demonstration of an image output as an HD-SDI signal from the player to the HVE9200. The image was encoded at 20Mbps in AVC/H.264, output as DVB-ASI, and then decoded by the HVD9100S on one monitor, and passed through the HVE9200 on the other monitor. This enabled visitors to compare the two and see the difference in delay and resolution. Mr. Yoda explained that "while the amount of data such as packet headers increases for IP transmissions, we were able to transmit data at virtually the same low latency in this demonstration."

Mr. Yoda went on to say that with the improved resolution offered by the "HVE9200" despite the low bit rate, "we can appeal to the wide variety of needs of broadcasters who want to transmit high-definition images at a low bit rate." Furthermore, trying to improve the image quality and low bit rate alone will not allow for transmission at a 33msec delay. Mr. Yoda explained, "one product has both the low bit rate high resolution functionality and the short delay functionality, but because there is no way to use both functions at the same time, we would like the product to be used properly, making use of each function separately."

The "XVE9300" is equipped with a 2ch AVC/H.264 encoder engine and is capable of simultaneously transmitting two types of material as well as 3D broadcasts. NTT Electronics input an image from two cameras via an HD-SDI signal into one XVE9300 at their booth. They demonstrated the image encoded by an XVE9300 AVC/H.264 encoder at 20Mbps being output by DVB-ASI and simultaneously received, decoded and output to a monitor by two HVD9100S units.

It was explained that "since the simultaneous transmission of 3D images by 2 full HDs have better resolution than the common half-HD side-by-side unit, there are many requests for using it for sports live broadcasts in 3D". When talking about other uses, Mr. Yoda explained "synchronized time information can be input, so it could be used to simultaneously transmit data to 2 channels by transmitting images taken with 2 cameras. It could also be used for theater and cinema 3D transmissions." He went on to add that "there has been talk of cable TV businesses using it to add another independent broadcasting channel, so we would like to promote it for the transmission of data between cable TV stations."