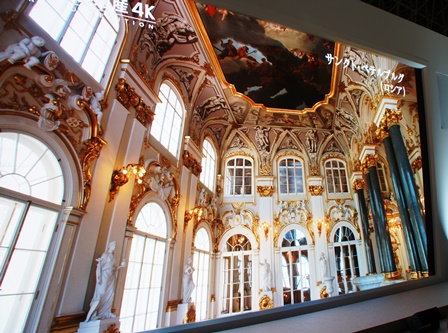 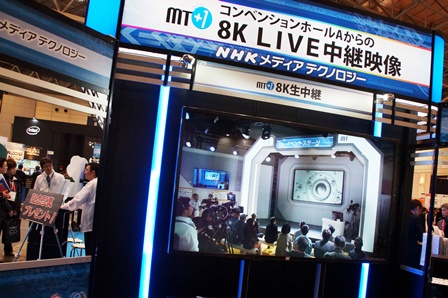 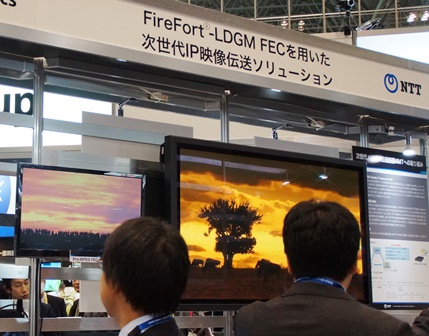 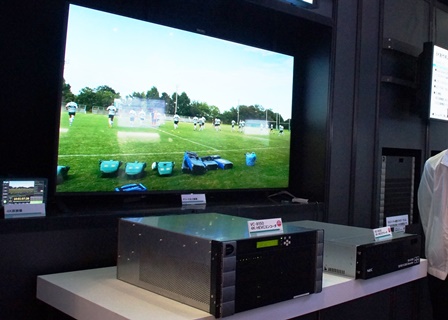 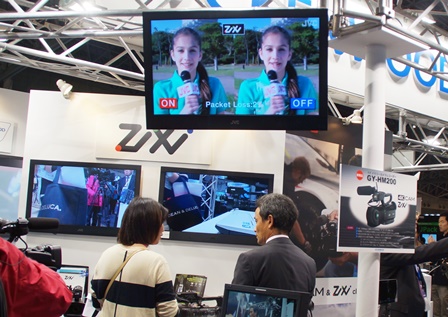 In Parts 1 through 3, I discussed the overall feel of the show, the diverse range of cameras on offer, and the way production workflows are moving increasingly towards file-based solutions. In Part 4, I want to touch on the high-definition, large-format displays that were a standout presence at the expo, along with the range of encoding and content broadcasting technologies that are supporting the core of today's digital era.

Large high-definition displays could be spotted here and there throughout the expo. Sony made use of the international conference space, covering one wall with a 14.5m wide x 3m tall wide-screen display. The company used three ultra short focal point 4K SXRDTM projectors to show footage of the World Cup soccer playoffs at 12Kx2K resolution. The space gave off a sense of realism and intense presence like the kind you'd experience sitting at a stadium watching a live sporting event. Sony's booth also sported a 300'' 4K-capable LED display which showed footage of World Heritage sites and soccer games. The LED element pitch is very fine, creating a crisp, high-resolution image that feels like you are actually there (title photograph).

One unit that really stood out was CREATE LED's (China) massive 10m x 5m LED display. Using 500mm modular units to assemble one vast screen, the device retains a very small pixel pitch, achieving a QFHD picture element. Scenes of waterfalls, Mount Fuji, fields of flowers, and vistas from China were being screened. Even from a distance, this footage drew people in. Close up, too, the pixels were barely detectable, creating the feeling that you were getting sucked in to this vast and beautiful screen. The sense of realism was astonishing.

Like Inter BEE, which greeted its 50th anniversary, NHK Media Technology (NHK-MT) celebrated an anniversary of its own -- the 30th anniversary of its founding. The company showed 8K and 4K displays, screening a range of super high-definition footage. The biggest attraction was at the "world's first 8K 3D theater," where a DILA projector (JVC) was used to play a fantasy drama entitled "Wish" on a 200'' screen. This piece drew major attention. The company also exhibited footage of a live brain surgery (not for the squeamish) in 4K 3D, pitching its useful application for the medical sector. By far the show stealer was a three unit, super wide screen 8K setup. The orientation of the footage was slightly shifted for each screen, using the three cameras to synchronize the footage while applying effects like time lapse to create a vivid moving picture. The three direct-view units were each 98'' 8K LED displays from BOE in China. This application is drawing attention for its potential use for showing super high-res widescreen footage at public screenings or other events. These displays also drew attention for their use in the first live 8K screening. The company's booth at Hall 6 was linked to the main stage at the convention hall to deliver an uncompressed 8K60P live broadcast with minimal delay. The video signal in the main convention hall was shot on an 8K camera and sent via a QG70 (QFU) uncompressed video relay device over fiber-optic cable to Hall 6, where another of the same unit decoded the signal to 8K, where it was then broadcast on the aforementioned 8K displays by BOE.

NTT Group demonstrated a next-generation IP video broadcasting solution. It consisted of utilizing an IP gateway loaded with its newly-developed high-fidelity error correction system to achieve high-quality broadcasts over a network even amidst packet loss. The hi-fi, multi-function transcoder was developed for video streaming services that push content to multiple platforms. It offers H.264 HD7CH transcoding and supports MPEG DASH, the next-generation streaming standard. It also uses the high-fidelity H.264 codec, which achieves low latency even at low bitrates. NTT also demoed a high-stability IP broadcasting system which allows the same IP stream to be broadcast on a different channel; this channel can then be tapped into if packet loss is experienced on the main channel, shoring up any data loss. The company also showed a solution where an HEVC software based decoder capable of handling 422/10bit 4K60P, 4K/HD/SD, and 50/59.94i/60P formats was used to decode a 422/10bit 4K60P stream and display it on a 4K monitor.

NEC, poised to respond to the oncoming update to terrestrial digital broadcast systems, which are rising to meet the digital world, pitched the merits of an integrated television relay system composed of a next-generation master, bank, and private broadcaster system. As for 4K, which has already become widespread, NEC showcased a 4K/60P compatible HEVC encoder/decoder that is in use in test broadcasts for Channel 4K, as well as a 2K HEVC codec that is in development. Following the U HD standard's updated recommendation to BT.2020, NEC exhibited a colorimetry converter that can mutually convert between BT.2020 and the previous BT.709 HD standard. Lastly, it unveiled a wavelength multiplexer for 4K and 8K that also allows CWDM for a maximum of 16 wavelengths on one optical fiber, achieving broadcasts over a 3G-SDI signal.

NHK Integrated Technology (NHK I-Tech), itself welcoming 45 years since its founding, presented solutions geared at contributing to a safer society. Its Emergency Broadcast Wi-Fi System functions as an ordinary Wi-Fi access point during normal conditions, offering government updates and information for tourists. In the event of an emergency or disaster, it automatically switches to using a multicast format via access points set up in evacuation sites and at government organs to push emergency alert information to users of smartphones and other devices. The company's Multi-Function Digital Signage System shows a scrolling marquee of text featuring NHK News, public information, and other original text strings. It automatically switches to relay emergency earthquake alerts and tsunami warnings -- all of this in Japanese, English, Chinese, Korean, and three other languages.

Village Island, which jointly developed the above Wi-Fi system, exhibited a deep range of codec related solutions. Its STUDIO 4K server is a player geared towards not only content creation, but public screenings and applications in digital signage. With hybrid casts going live and needs for those systems on the rise, the company demonstrated Hybrid Caster, a useful experimental device for content creation and video production sites. They also showed a copyright protection solution poised to meet today's changing needs. Developed jointly with INA (L'Institut national de l'audiovisuel) in France, this technology automatically detects content illegally uploaded to video sharing sites.

As IP broadcasting rapidly becomes the norm today, "ZIXI," from the company of the same name, drew attention. This is a QOS software geared at IP net streaming. After debuting at IBC 2014 and unexpectedly taking home the IBC Award, this tool appeared at Inter BEE at the JVC Kenwood, DPSJ, and Kyoshin Communications booths. Using a camera with this software built in and then broadcasting the footage over an IP broadcast ensures that the stream will remain stable even under network congestion.

We've looked at the latest in digital technologies at Inter BEE over these four installments. The broadcasting and telecommunications climate is rapidly changing to keep pace with diversifying social needs, and the technologies supporting these sectors have made major strides forward. The Tokyo Olympics is also on the horizon, and it is expected to have a large impact on these industries, so we are increasingly seeing more and more 4K and 8K techologies, alongside hybrid casting and other increasing integrations with social media. Broadcasting and information are ceaselessly evolving, and all eyes are on their future growth. I hope Inter BEE keeps contributing to this drive forward.