NAB Show 2017: Content Security With Forensic Watermarking talk; responding to the growth in piracy due to increasingly high-quality video; "2017 is a crucial year in the fight against piracy" 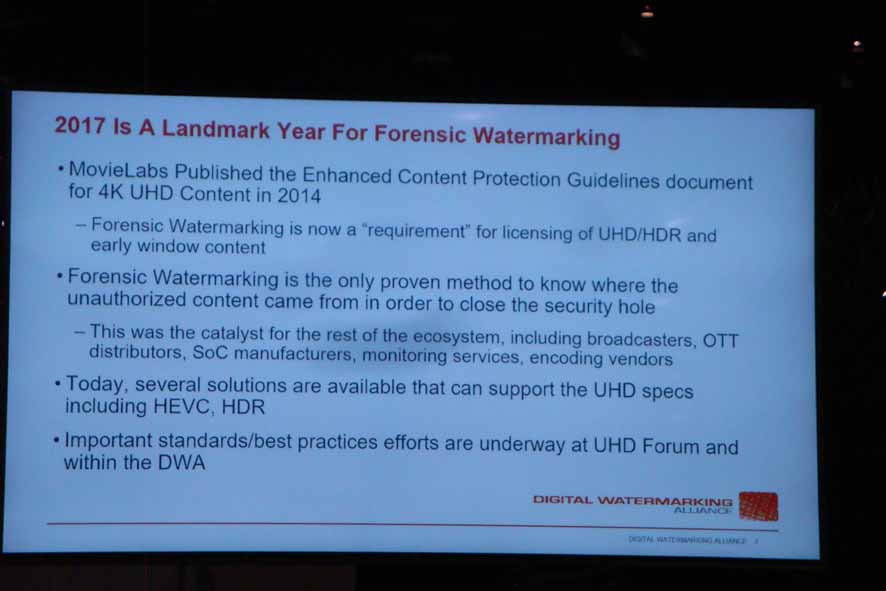 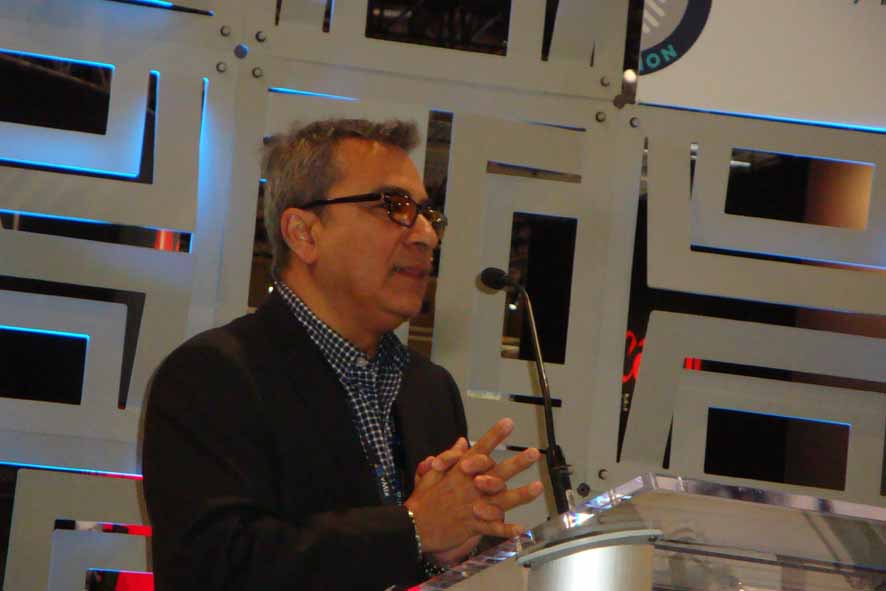 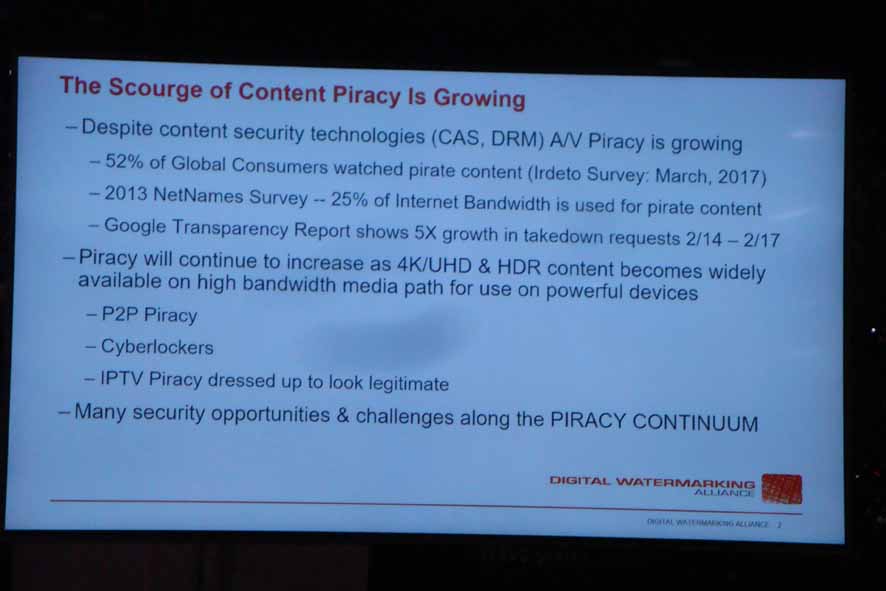 Piracy is on an upward trend worldwide 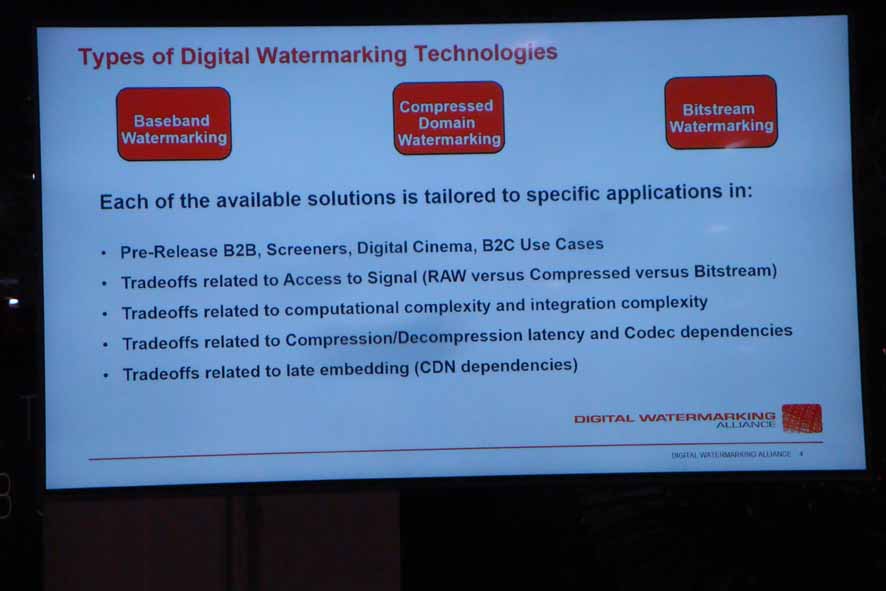 Forensic watermarking will need to be optimized for each medium, says Mr. Samtani 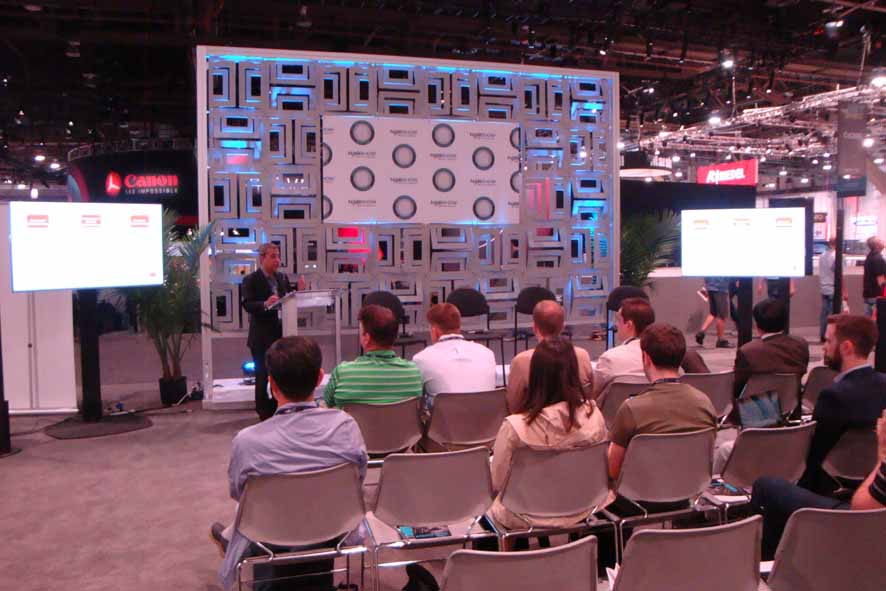 The Pavilion space, in a corner of the Central Hall

On April 25th, at the Cybersecurity Pavilion in the Central Hall of the Las Vegas Convention Center, site of NAB Show, a speech was given on the subject of forensic watermarking.
Taking the stage was Mr. Rajan Samtani, Senior Advisor for the Digital Watermarking Alliance (DWA).
Alongside the ongoing move toward improving content security technology, piracy of audio and video content has been growing as well, noted Mr. Samtani. The audience was then presented with an astonishing figure. According to a March 2017 study, 52 percent of the content viewed by the world's consumers is not original, but pirated. Google's Transparency Report shows that the amount of pirated content quintupled during the three-year period between 2014 and 2017.
Piracy is apparently being done through a variety of methods, with the use of P2P networks, cyberlockers (cloud-based file storage), and IPTV. This also includes methods that are currently legal.
Behind the persistence of piracy is a sort of ecosystem known as the "piracy continuum." Various categories of participants in piracy have been identified. In addition to criminals who try to profit from piracy, hackers who want to show off their agile hacking skills, and casual pirates who are unaware that they are committing a crime, these also include frustrated consumers, who would like to buy the content but are unable to do so, and confused consumers, who are unsure as to what is and is not legal.
Mr. Samtani pointed out that, in order to deal with this, forensic watermarking will be critical. Forensic watermarks are not visible when content is viewed normally, but they remain in place even if the content is illegally altered, whether the content itself has been obtained legally or illegally. There are three types of forensic watermarks: baseband, encoded, and bit stream. They can be used to suit a range of purposes and viewing environments.
The circumstances are changing in ways that present new threats in terms of piracy, says Mr. Samtani. With content increasing in resolution and image quality thanks to developments such as 4K UHD and HDR, and the internet becoming more accessible at greater bandwidths, the devices used to consume content are also becoming more sophisticated, and the DWA is concerned about further increases in piracy. In response to these trends, the DWA and the UHD Forum are currently working on measures to deal with the new threats.