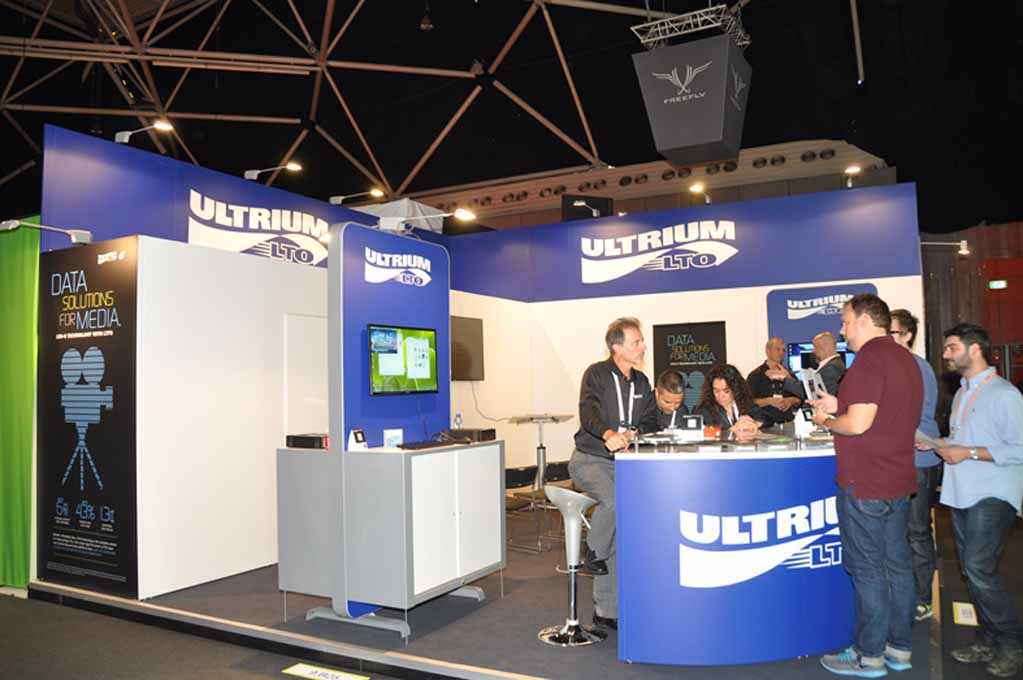 A new “Road Map,” or detailed plan, for the future has been set for the digital tape storage technology, LTO (Linear Tape-Open), used for storage and records in the broadcasting industry, as the plan has been unveiled for the expansion of storage capacity up to the technology’s 10th generation. The 6th generation (LTO-6), currently in use, holds 2.5 TB (terabytes) per reel of tape. This will be expanded to 48 TB on the 10th generation LTO. The LTO-10 will have more than 19 times the storage capacity of the current LTO per reel, significantly improving how efficiently space is used.
(Visual Communications Journal Editorial Writer/ Nihon University College of Industrial Technology Lecturer Hiroshi Suginuma)

■ Alas, “Cold Storage”
The amount of information generated by the human race continues to swell, with one theory predicting the amount to reach 8.5 ZB (“zettabytes”: a zettabyte is equivalent to 10 to the 21st power, or 1 billion times greater than a terabyte) in 2015. Although the storage devices containing this information also continue to expand, one problem is how to handle information that is “necessary, though rarely accessed (infrequently accessed).” This type of information, and the storage units that contain this type of information, are referred to as “cold storage.”
Content producers, beginning with broadcasters, accumulate and store information that was sent out to the world in the past, and this information — with the exception of some popular content — has the tendency to end up as cold storage. Information stored in cold storage rarely presents the opportunity to produce profits, so such information is often stored on tapes that excel in terms of cost-effectiveness. Of these, the LTO format that many manufacturers use to put out products is popular.

■Significant Storage Capacity Increases Each Generation Storage Plans Facilitated by Setting 10th Generation
The first generation LTO which emerged in 2000 had 100 GB of storage. The latest LTO-6, announced in December, 2012, can record 2.5 TB when non-compressed. At the time, the LTO Road Map detailed up to the 8th generation, with the planned development of the LTO-7 holding 6.4 TB per reel and the LTO-8 holding 12.8 TB. The hardware of the current generation of LTO supports tapes from up to two generations prior for reading and tapes from the previous generation for writing, so although regular exchanges of equipment and transfers of tapes are necessary, it is difficult to create future storage plans if details are only available up until the 8th generation.

■LTO-10 to Have 32 Times the Storage Capacity of LTO-5
American firms offering LTO technology, IBM, HP, and Quantum, made a joint announcement of the Road Map up to the LTO-10 on September 10th during IBC 2014. According to their announcement, the LTO-9 and the LTO-10 will reach 26TB and 48TB, respectively, which equates to a roughly 100% increase per generation. The manufacturer’s specs indicate storage capacity following high-efficiency encoding (compression), although there is essentially no compression done on data that has undergone mpeg compression and the like. This article shows the storage space for compressed content calculated using the easy-to-estimate “naked” storage capacity. Further, the compression technology supplied by LTO has twice the compression ratio for the LTO-5 in comparison with the LTO-1, and 2.5 times the ratio in comparison with the LTO-1 for the LTO-6 and later. This compression becomes useful when storing written data, etc.
In terms of backward-compatibility, the LTO-9 and later guarantee to support — as the current generation does — the reading of tapes from up to two generations prior and writing for one generation prior. Organizations currently operating on the LTO-5 will find the need to transfer media once to an LTO-7, expected to be announced next year, and once again for the LTO-9 which is expected 5-7 years following the LTO-7. However, in comparison with the LTO-5, the LTO-9 will have more than seven times the storage capacity, and the LTO-10 will have 32 times the storage capacity, allowing for significant downsizing of robot libraries and storage space by transferring to these later generations.

■ New Developments in HDD and Optical Disks to Keep Apace
Hard discs (HDD) and optical disks are challengers to the tape stronghold in cold storage. HDD reached 10 TB per unit for the first time since the introduction of products filled with helium and improvements in a variety of aspects. Moving forward, expansions in storage capacity are expected as the result of new technologies such as thermal assistance. With optical discs, Sony and Panasonic are expected to release cartridge-form storage devices using discs of 300 GB. Disc storage capacity will be expanded to 1 TB in the future.
The different strong points of each of these technologies — tapes which excel in costs, hard discs which excel in speed of access, and optical discs which have the edge in long-term storage — have archivists throwing up their hands. Dividing up these kinds of media should allow for the development of a well-balanced archive with a hierarchical structure.