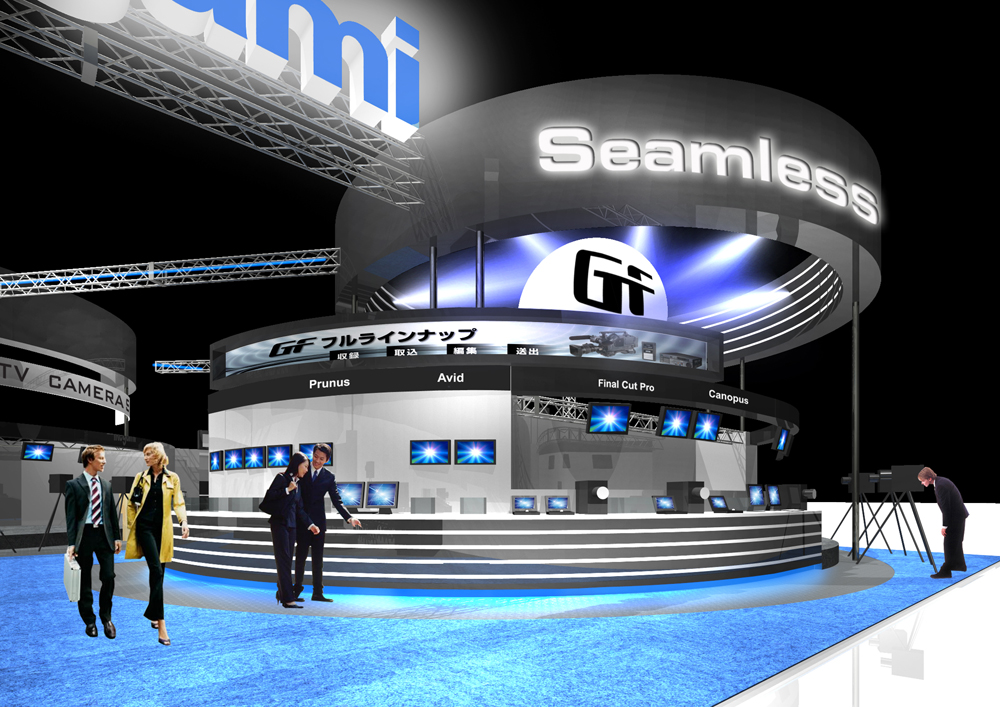 The GF series, developed in conjunction with Toshiba last year, is designed to provide both an efficient solution for program production work flows and improved content quality. At this year's Inter BEE, Ikegami Tsushinki Co., Ltd. exhibited specific configurations of their equipment lineup and applications.

Centered on the GF series with flash memory media at its core, Ikegami is aiming to introduce a newly evolved linked flow from on-location coverage and editing at broadcast stations, to transmission and archiving.

Naoki Kashimura, General Manager of Ikegami's Corporate Strategy Controlling Division and Marketing Division, describes this year's exhibit as, "A further enhancement of the seamless integration theme based on the concept of the <italic>triple less</italic> ― tape-less, wire-less and seam-less." Ikegami's main product on exhibit was the GF series tapeless video production system employing flash memory developed in partnership with Toshiba. The GFPAK lineup incorporates three systems ― in capacities of 16-, 32-, and 64GB ― offering features such as remaining memory display even with the power off, as well as serial ATA and USB2.0 interfacing. The GFCAM series delivers remarkably expressive video images through the same digital processing IC (ASIC) as Ikegami's high-end HDTV camera. And the GFSTATION with 128GB internal flash memory provides VTR-like operability with tapeless functionality while enabling multitasking performance such as data transfer during time-shift replay or preview. The company also introduced its GFPLAYER ― a low cost, compact and portable device for replaying GF STATION PORTABLE and GFPAK media ― at this year's Inter BEE. Additionally on display was GFMediaManager software for managing media assets, a key device in creating a simple archival system that forms the foundation for a file base.

As digitalization progresses and as the beginnings of a transition to file-based systems not only for simple tapeless developments but also for the workflow revolution become more recognizable, Kashimura states that, "Change will not come with a single giant step but rather in incremental stages to better match the demands of working environments, and it is with these types of system configurations that the GF series excels".

Inter BEE presents an excellent opportunity for exhibitors to gather information and hear firsthand the valuable opinions of video production and editing technical staff. Realizing that this is one of his company's objectives at Inter BEE, Kashimura explained, "Of course, we welcome the opinions of the technical staff but we would also like to hear from directors and producers to find out what kind of work they want to do, putting ourselves in the shoes of the customers to find out ways of achieving good video production quality in specific types of locations."

When considering taped media management, the rule of "which footage should be kept, and for how long" must be determined and the GFMediaManager provides an excellent solution for this issue. By enabling GFPAK management functions such as footage search via metadata as well as copying to other drives, the software becomes an important tool that simplifies the job of deciding whether to keep or delete footage within file-based systems. Kashimura continues on by saying, "Generally speaking, there are still a lot of arguments about the most optimal media for archiving. And one of the reasons for this may be that there is a lack of information about the advantages of networks in which file-based audio and video data can be freely searched and used at anytime from any location. We are hoping that these issues can be answered by achieving a common understanding about this matter." And we are confident that this year's Inter BEE will become the optimum forum for promoting a better understanding of this important issue.