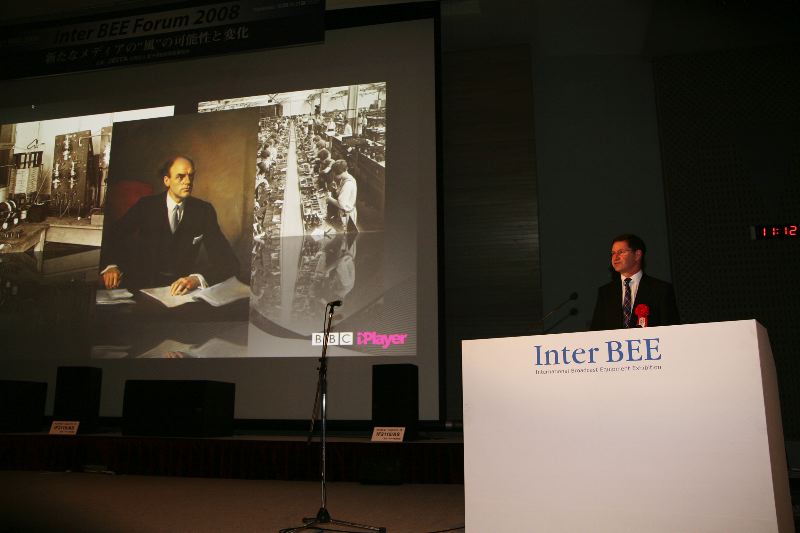 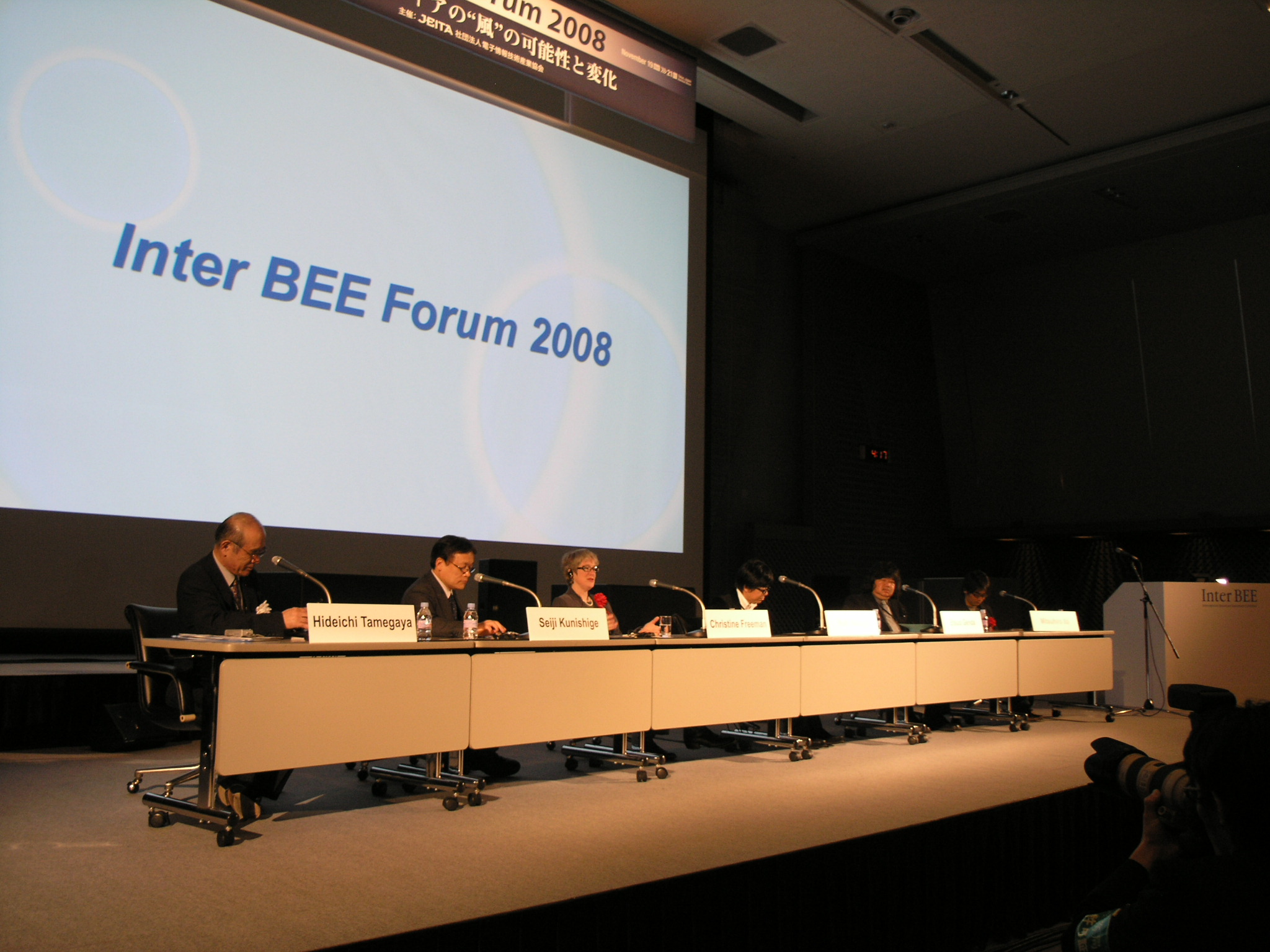 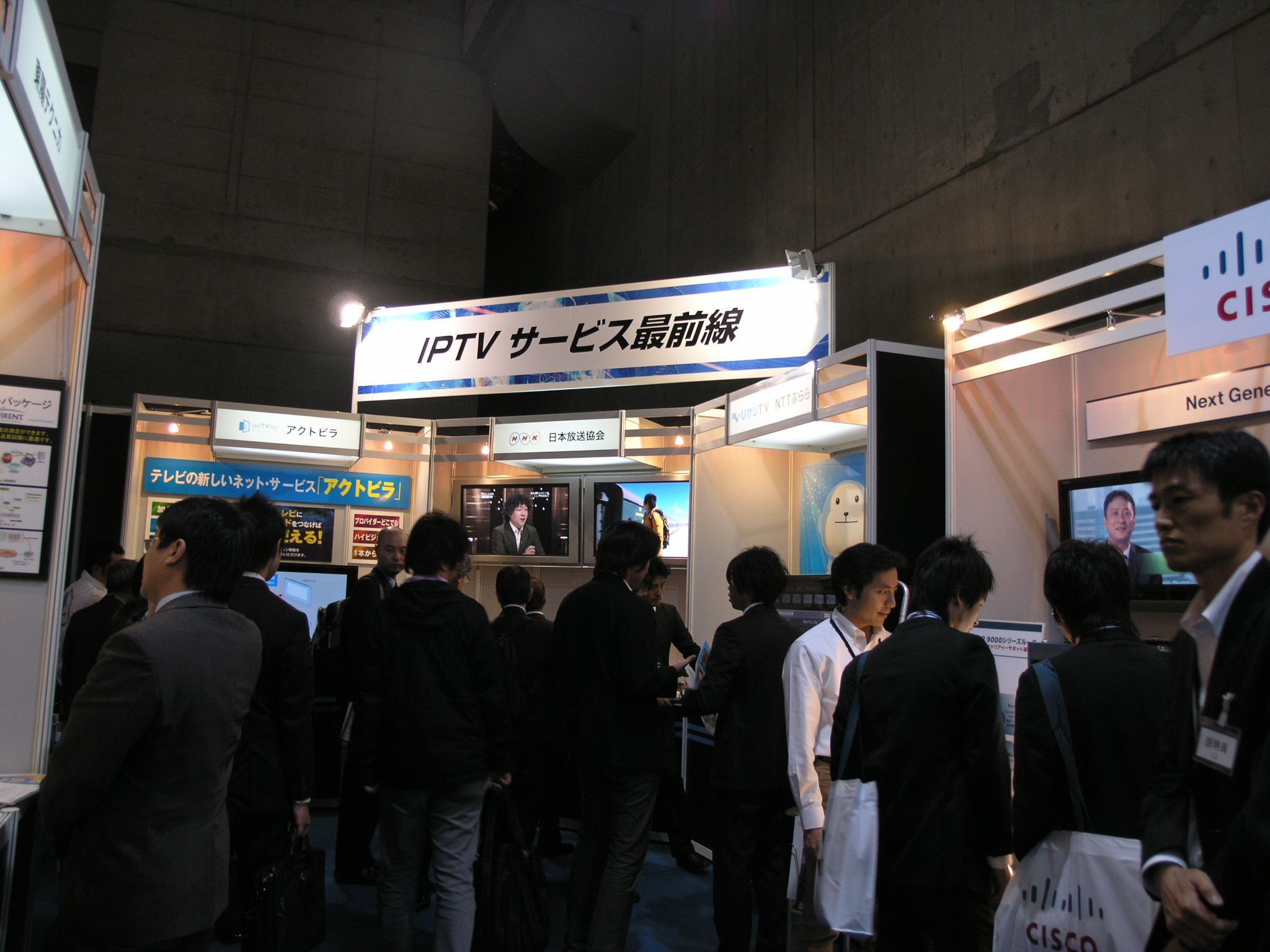 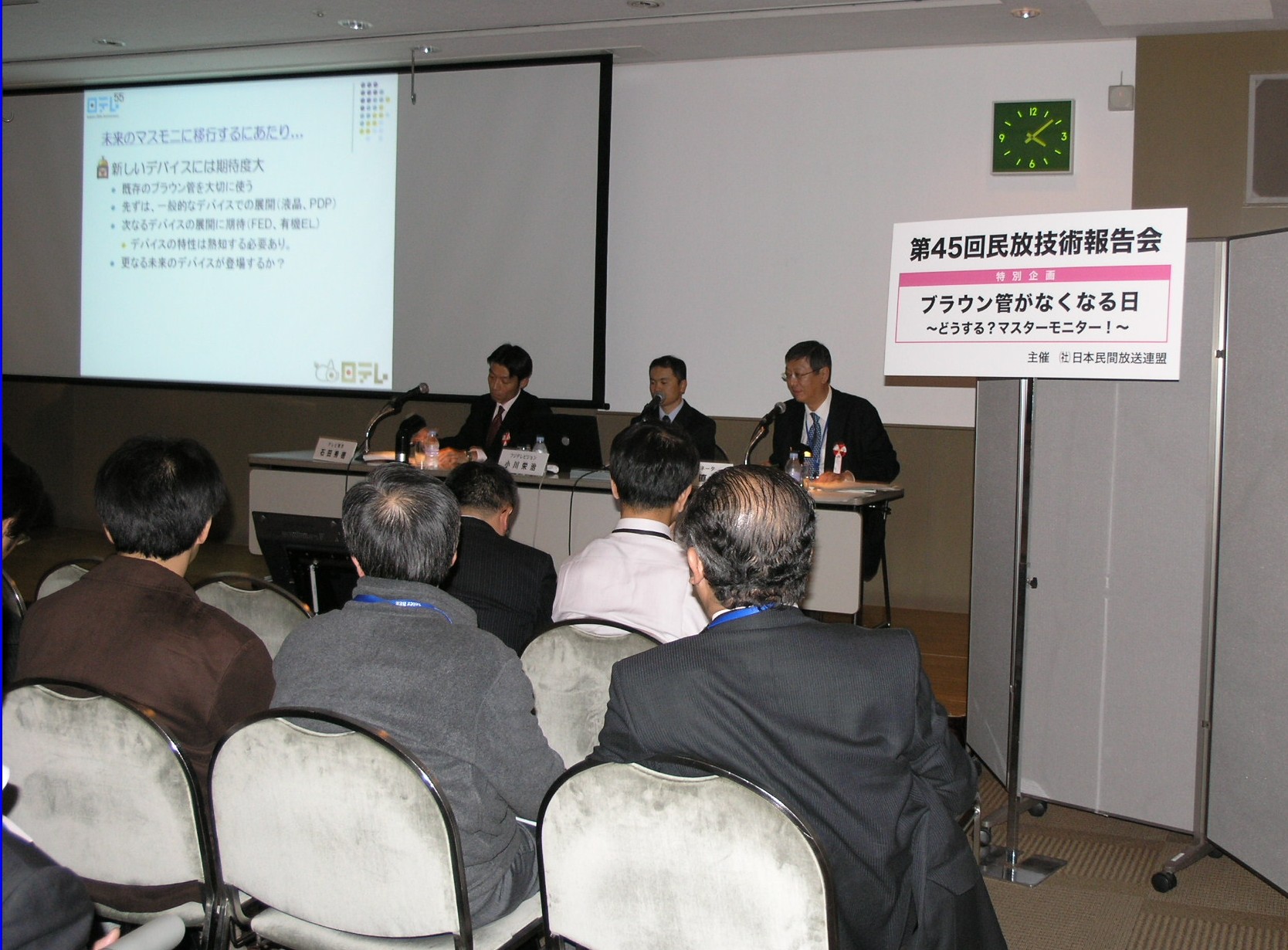 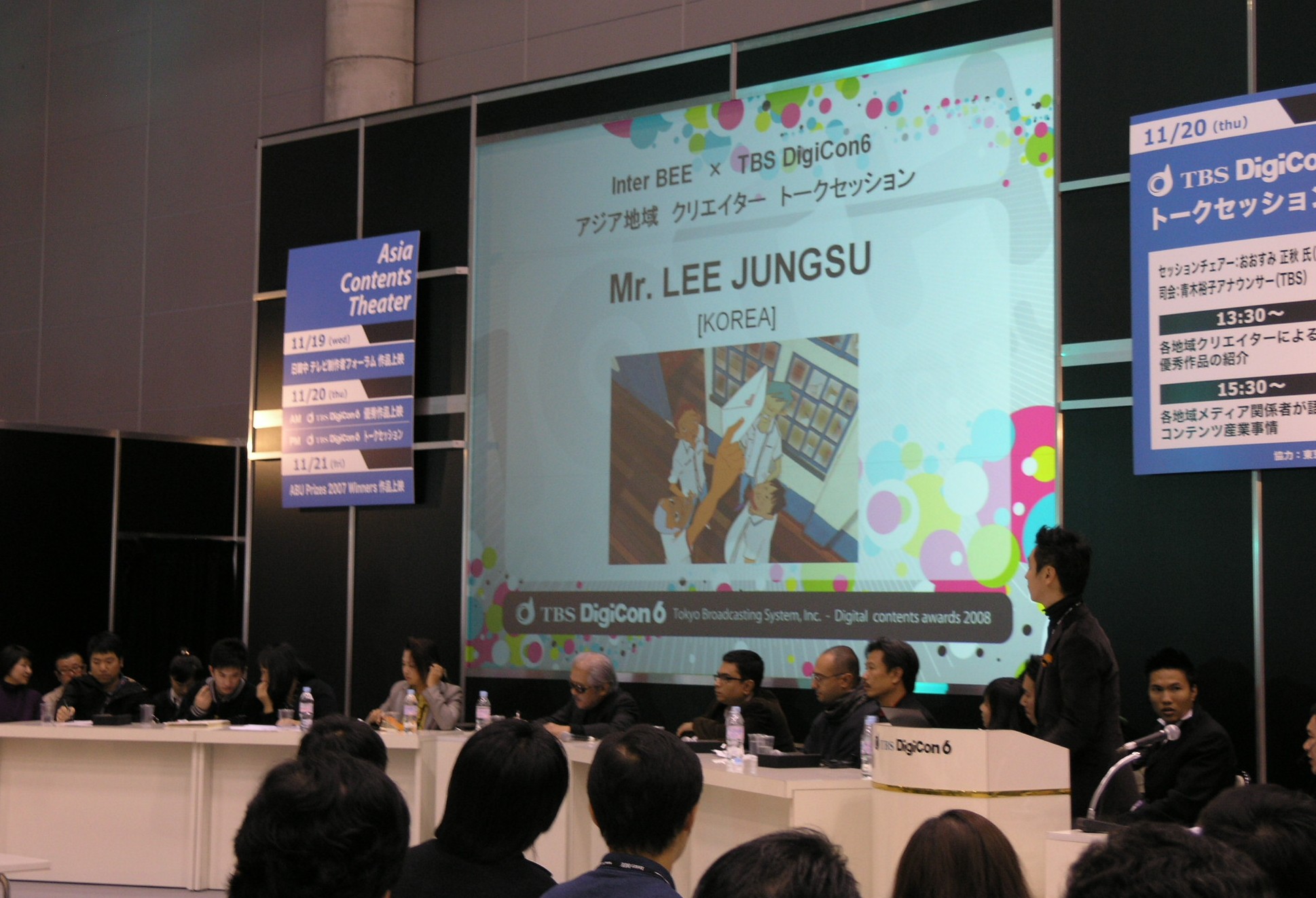 At the Broadcast Business Symposium, a panel discussion by BCAJ (Broadcasting Creators' Association of Japan) with a rather thought-provoking title, "Will Broadcasting Become a Coelacanth in the Internet Age?", was held with frank discussions and exchanges of ideas by auteurs, web designers, cartoonists, and program creators on the issues and possibilities concerning broadcasting today. At the International Symposium for Visual Production, a speaker-to-audience cross-discussion with the title, "Fostering Talent for Creative Digital Content Production" was held, which invited broadcasting leaders and creators in video content production to discuss the important issue of fostering talent in the industry. At the International Symposium for Audio Production titled, "Japan's Current Situation of Surround Commercial Message Production", prominent advertising creators energetically discussed this subject.

In conjunction with the aforementioned symposiums, a series of newly established tutorial sessions was also held targeting students who are planning to work in the industry as well as neophytes in the broadcasting, audio and video industries. Lecturers and instructors who are active in broadcasting stations and content production as well as equipment manufacturers, provided practical tutorial sessions on technique with subject titles that included, "Basics of Digital Audio", "Basics of Digital Video Signal", "Shooting Methods for Digital Image Composition", "Image Quality and Color Management", and much more. These sessions were so popular that even though participants were allowed to sign up in advance, many people also signed up on the day of the lecture to fully pack every session. Taking a look into the venue several times during the lectures, I saw not only neophytes and students but also veterans trying to catch up on the latest information about new technological transitions. I hope that these tutorial sessions will continue and become a part of the standard Inter BEE programs in the future.

Another newly planned event was the Asia Content Theater, which was held at a wide-open space located in back of the Professional Audio Equipment exhibition hall. During the three-day period of Inter BEE, outstanding productions by the TV Producers Forum of Japan, Korea, and China, nominated productions of DigiCon6 of TBS (China, Korea, India, Thai, etc.), and productions of ABU Award Winners (Korea, Australia, Bhutan, etc.) were shown using the approximately 200-inch mega-screen display installed at the venue center. The producers and filmmakers of these superior productions also presented talks before their individual works were shown. The many participants to this event were all very interested in viewing the unique and superb presentations of their Asian neighbors, which can rarely be seen in Japan.

The IPTV Summit returned to Inter BEE as a special event, consisting of a seminar held at the International Conference Hall and a system exhibition at one of the exhibition halls. The seminar attracted a large audience with titles such as, "Expectations for IPTV", "The Past, Present, and Future of Standardization in IPTV", and "Broadcasting Content Protection in the World Today", which were presented by Softbank, KDDI, Sony, and Fuji Network. A lecture session was held based on the title, "On-demand Broadcasting Business Evolution" presented by NTT Plala Inc., AcTVila (TV Portal), and NHK, while a panel discussion titled, "What will Happen to On-demand for Commercial TV Stations?" was also presented by commercial TV stations and advertising agencies. At the exhibition hall, supporting companies showed distribution technologies such as next-generation broadcasting infrastructures and IP-STB platforms, and demonstrated on-demand programs by NHK (service began Dec. 1, 2008) using NTT Plala's Hikari TV (optical TV) or AcTVila ― all of which attracted many visitors.

JEITA also sponsored the DTV Workshop 2008, taking into account that the full transition to digital broadcasting is very near in the future. And the following lectures titled, "Aiming at the Full Transition to Digital Terrestrial Broadcasting" and "Introduction of New Mobile Multimedia Broadcasting after the Transition to Digital Terrestrial Broadcasting" were presented by the Ministry of Internal Affairs and Communications (MIC), while "International Development of ISDB-T Broadcasting in Brazil" was presented by NHK Integrated Technology Inc. All lectures were attended by important people of the industry as the subject matter was very timely and relevant.

Marking the 45th time it has been held, the NAB-J Symposium of Broadcast Technology provided a total of ninety presentations during a three-day period from various industry sectors such as production engineering, network linkage communication, datacasting/digital services, and transmission. The wide range of topics and themes reflecting industry trends included titles such as, "File Transfer Production Technology", "HD-IP Transmission", "4K Video Transmission", "One-segment Service", "CG Related Technologies", and much more. Also, as a special event, a panel discussion titled "Next-generation Video Monitors for TV Production" was held. Enthusiastic and relevant discussions were made on topics concerning the development stage of next-generation monitors from manufacturers as well as the application stages, requests and conditions of master monitors from users, such as key stations and production houses.

The 10th NAB Tokyo Session, which was originally held at different venue, became an Inter BEE simultaneously held event and presented the topic, "The Macroevolution of Broadcast Media ― Staying in Touch with a Revolutionary Business Environment". A new milestone in the broadcasting industry will be seen in less than 1,000 days with the wholesale switch to digital terrestrial television broadcasting in Japan. And the first keynote lecture on this subject was presented by the Ministry of Internal Affairs and Communications (MIC) titled, "Toward Full Digital Transition in 2011", which was followed by a lecture titled, "Analog Broadcast Termination on February 17, 2009: The Challenges Facing the U.S. Broadcasting Industry" that was presented by Jonathan Collegio (VP, digital television transition at NAB). He clearly described the situation and circumstances of DTTB transition in the U.S. that was to occur in 90 days from this writing. What's more, a panel discussion and lecture involving NHK, commercial stations, and experts in related equipment manufacturers were held based on the major themes of, "Business Strategies in the DTTB Era" and "Broadcasting Facilities in the Digital Generation." These topics were very appropriate for the times and the spacious venue was packed with an interested audience.

Photo 2: Panel discussion at the International Symposium for Visual Production.

Photo 3: The IPTV summit presentation at the exhibit hall.

Photo 5: The Asia Content Theater is a new event.