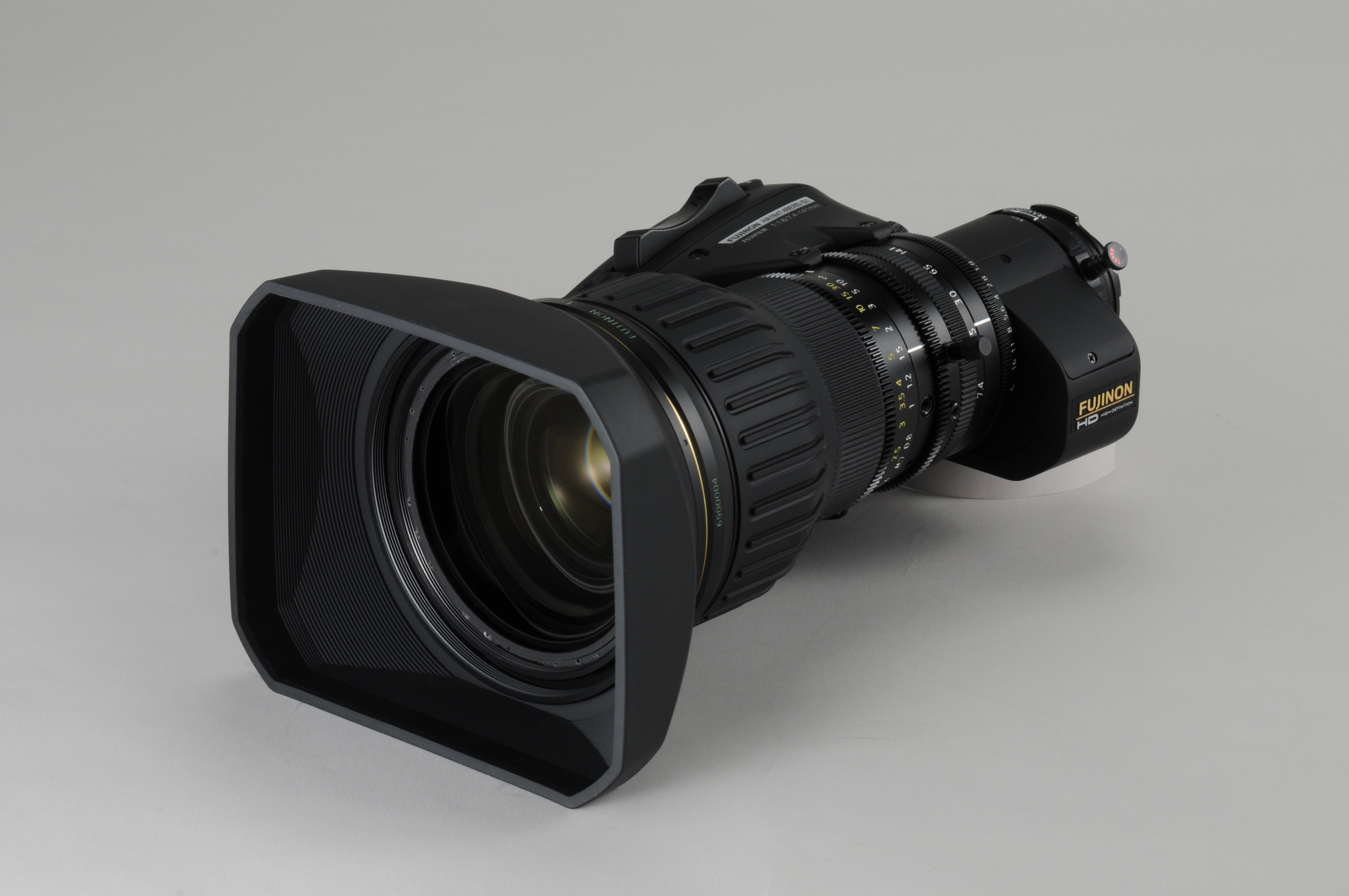 In the Fujifilm optical device corner, next generation TV and cinema lenses supporting high resolutions, and functionality-expanding accessories are on display. "With the switch to terrestrial digital broadcasting and proliferation of 40" and larger television sets, there is a growing need for even higher resolution and higher quality TV and cinema lenses at the video production source. These products that are on display are a response to those needs," says Hiroshi Kosaka, member of the TV lens sales team, product lens department #2, optical device division.

Lenses are prepped and mounted to camera bodies of major manufacturers, so that one can get an actual impression of functionality, performance and image quality. The main products on display are as listed below.


■ A lens of remarkable advancement in optical quality: the "FUJINON HA19 x 7.4"

The centerpiece of the TV lenses on display, the "FUJINON HA19 x 7.4" portable HDTV lens goes on sale toward the end of November. Lens specs include the use of leading edge optical simulation technology and high precision, large diameter aspherical lenses. This results in a compact form factor, yet yielding superb optical performance.
Focal length ranges from 7.4mm to 141mm, allowing for high quality video to be displayed from the center of the screen to the edges. Its "3 group zoom specification" curbs aberration when zooming, in particular greatly improving resolving power at the edges.

It is also possible to shoot video up to a minimum distance of 0.55m. If using the internal 2.2x extender, telephoto distance can be extended to 310mm. In addition, a large number of the 2/3" "HA Series" of HD portable lenses are on display.

With the spread of digital cinema cameras featuring high PEL, there is a push to exceed resolving power standards of the past, and bump basic functionality up a notch. The "HK Series" can handle both digital and film cameras, and can meet the demand for high optical resolutions in excess of 4K. "Recently, television stations have wanted higher resolutions, and have started using cameras used for digital cinema. The 'HK Series' meets the needs of a large number of television stations." (Hosaka)

The "HK Series" is esteemed for its high optical capabilities, and was used for camera comparative purposes at the "CINEGEAR" exhibition of camera-related equipment in the US.


■ Also on display: lenses that take ease of use and price into consideration

Recently, remarkable economic progress has been made in emerging nations, and along with it, so has the move toward digitalization and HD. This has lead to an increase in production of high resolution programming. The 2/3" "XA-s Series" of HD portable lenses, along with the 1/2""HS Series" and "XS Series" of HD portable lenses are also on display, and are geared toward the markets of these emerging nations.

In addition, many other products with expanded capabilities are also on display, including the "Wireless Demand System" which allows wireless zooming/focusing. It can instantly focus on the target's face using "PF facial recognition" technology.

The optical device corner focuses mainly on "post-HD" next generation high level lenses, as well as a rich variety of other content that meets a large number of imaging needs.