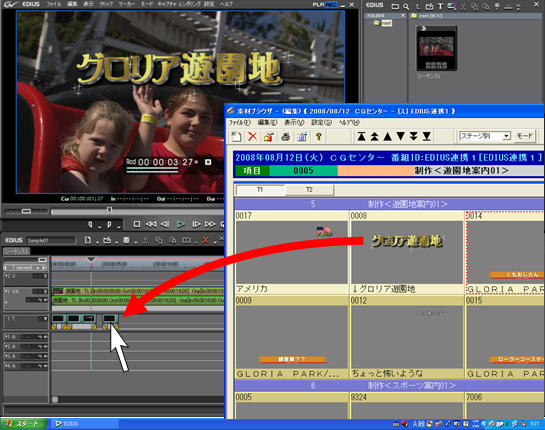 Lambda Systems Inc. (Headquarters:Tokyo, Setagaya-ku; Representative Director: Hisaichi Ando) exhibits at this year's Inter BEE 2011 at the Makuhari Messe, held from November 16 (Wed.) - 18 (Fri). The company will display a range of products, with the focus being its "Neo-n" marquee system. They will demo their technology working in conjunction with their own and other firms' products. The theme is "Connections: Lamba's Products Link Smoothly with Other Devices."

At this year's Inter BEE, Lamba Systems will be exhibiting its plug-in marquee system software, Neo-n, developed jointly with Grass Valley and intended for use with the EDIUS non-linear editing system. Using the plugin in conjunction with EDIUS allows for subtitling delivery and linear editing, as well as editing subtitles in real-time editing and in post. Kazuhisa Nakamura, leader of the main sales division's planning team, noted of the EDIUS-compatible plugin, "Television networks have requested tools for marquee functionality, but the non-linear EDIUS software did not offer that until now. We jointly developed the Neo-n plug-in marquee system to better increase editing efficiency and respond to that need." He also remarked that "we want to use this demo as an opportunity to reach out to EDIUS users."


■ Also on display as a reference exhibit: the G-Touch video pen, which allows for drawing on video in real-time

Lambda will also exhibit as a reference piece their G-Touch video pen intended for real-time drawing on video images. The pen, envisioned with sportscasters in mind, would help those reporters give clear breakdowns of the game's events as though they were writing freehand. The pen also allows for pasting images and dragging contents around the screen. The product is envisioned for use with, for instance, live golf broadcasts, where the announcers could describe course changes and terrain details. A special corner will be set up at Lambda's booth to allow visitors to test the pen themselves.

■ Also on display as a reference model: the GRID-VEGA, a GRID-MF/VMX board slated for release in Spring 2012

The company will also be displaying its GRID-MF/VMX board GRID-VEGA, which offers functions for long-format HDTV animation, real-time 3-D images, external video input, embedded audio, and chroma key processing. The booth will feature a live demonstration using a camera: video of visitors will be chroma-key edited and composited together with a CG background in real-time.

Lambda will also be on hand to explain using Neo-n with its other products like the e-Telop emergency alert system and recording text data from an Excel sheet in ToolBook (ExcelVBA) and sending it to Neo-n.