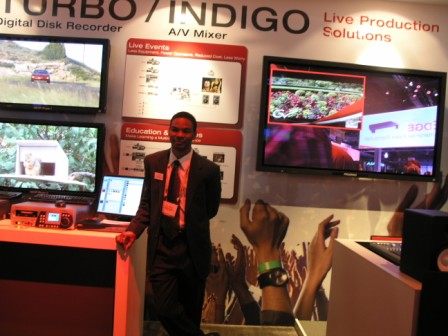 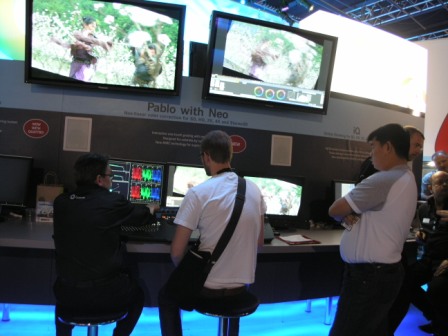 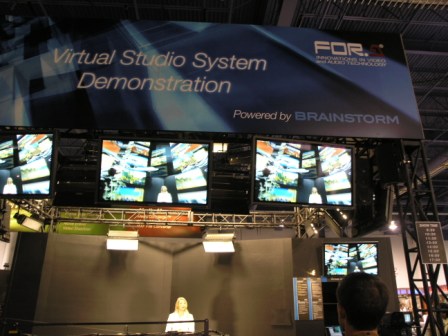 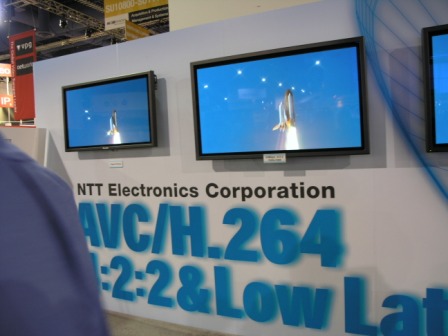 Technological trends seen at the NAB SHOW 2008 (part 3) Production systems, encoding technologies.
Previously I discussed tapeless cameras, high image quality/functionality cameras and video monitors. In this article I would like to discuss the continuing performance improvements and developments in encoding technologies and high quality production systems in the growing tapeless and network environments of the IP era.

As I have already stated, tapeless coverage systems are progressing at a rapid pace, while non-linear editing, composition and processing in production systems has become disk-based. Reflecting these trends, the systems and processes on display at this year's NAB show exhibited a move towards a total work flow linking all aspects of coverage, production, transmission and archiving. Merging high-quality and high-functionality, the video composition and processing exhibited in the production system booths gains a lot of attention each year - and this year was no exception - with the crowds bustling around the magnificent array of presentations.

Thomson Grass Valley had a huge booth favorably located near the south hall entrance, and their exhibit, larger than last year, featured performances of a wide variety of separate production systems. On display was "Media FUSE" - automatic production for IP network live streaming and on demand materials that works in conjunction with broadcasting, the highly-sought-after live production system centered on "Kayak HD", the high-speed "EDUIS Pro" reinforcing the MPEG/HDV/XDCAM format, the "Aurora Suite" HD news production system and the digital cinema film scanner "4K Spirit".
Quantel had their booth next to Thomson, and introduced and exhibited their advanced production flow system with "Quattro" at its core. As usual for the show, these exhibition booths attracted a large crowd. Quattro displayed their various upgraded latest technology systems released this spring - the "eQ" system (a comprehensive timeline edit, special effects and color correction tool), the "iQ" system (DI: digital intermediate movie production tool), and "Pablo Neo" (a next-generation color correction tool). At the hub of these systems is "Gene Pool", a server capable of parallel processing for different resolutions including SD, HD and 4K that negates the need for material copying during a project, making it more efficient to create advanced, high-quality productions. Also, Quantel exhibited their Newsbox HD version, an editing and production system already acclaimed in the broadcasting industry.

There were also a great number of production systems on exhibit in other booths. Autodesk's visual effect tool "Flame", the color corrector "Luster" and Adobe Systems' "Creative Suites Production Premium" gained much attention. Unfortunately, Adobe, who usually have an overwhelming presence at the show, were unable to exhibit this year and announced their new products at a separate location.

FOR-A continued from previous years with their high performance switching system "HANABI" and this year they exhibited 3 model upgrades - 4M/E, 3M/E and 2M/E. These systems support 3Gbps-SDI, 1080/59.94p, and 50p and the 4M/E version is capable of multiple access for parallel work, and hence expected to be incorporated into large scale systems. The main front stage of the exhibit featured the company's flagship Virtual Studio product. Instead of the conventional bluemat background, this demonstration used a black background in conjunction with Brainstorm's "e Studio" software to create CG images with the 'beautiful Japan' theme, which included on-the-spot dancing images, Japanese 'ukiyoe' images and Japanese charcoal ink drawings collaborating to merge traditional Japanese art with the latest technology, that attracted many visitors.

Now that we live in the digital era, data compression is used for a variety of transmission, delivery systems, cameras and recorders, and as the advances and improvements in data encoding technologies are continuing at a spectacular rate, this year's show featured a wide range of equipment and systems from many companies. As these technologies are affecting the whole range of equipment and processes, booths concerned with these types of exhibits attracted the attention and appreciation of a great number of visitors to the show.

Having a good reputation in the encoding and image quality management area, K-Will exhibited at the NAB show for the 7th time this year. Along with large number of audio and radio related booths in the north hall, their exhibit presented remote image assessment, audio quality and error monitoring devices. Previously separate devices for digital characteristic sampling of video data, image freeze, audio mute, lip sync errors and other systems for problem detection and reporting have been combined into one portable unit with an advanced GUI. Already in use in a number of American networks, these devices are an effective addition for assessing and monitoring digital broadcast quality.

With a rich range of technologies, other exhibits included IPTV and encoding related items - Omneon presented their high performance file transfer engine and transcoders, IBM exhibited their content production and delivery workflow proposals, while TANDBERG showed their comprehensive IP solutions. Receiving great attention from the exhibition visitors, the technological trends of our current digital age was evident in all booths at the exhibition.