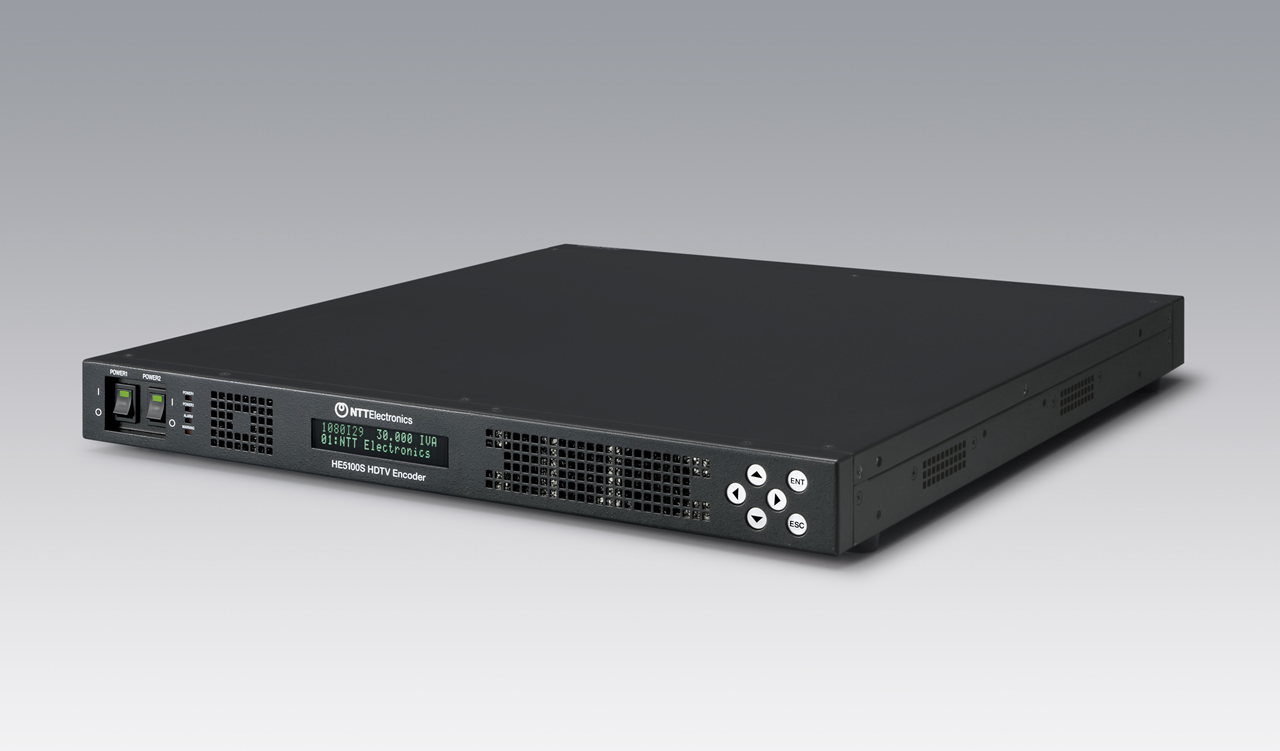 From November 16 (Wed) to 18 (Fri), at the Inter BEE 2011 held at the Makuhari Messe convention center, following the theme, "Providing an inspiring visual experience for everyone," NTT Electronics will unveil, for the first time at Inter BEE, the 33 msec super short-delay AVC/H.264 4:2:1 compatible [HV9200] encoders and full-HD 2 material, simultaneous broadcast and 3D compatible [XVE9300] encoders which were announced and displayed at the 2011 NAB SHOW in Las Vegas, in the United States.


■ First exhibition of the super short-delay updated AVC/H.264 [HVE9200], with one frame shorter delay time than before

The [HVE9200] is an AVC/H.264 encoder with all the high resolution, functionality, and stability of its predecessors, the [HV9100 Series], but improved short delay and low bit rate. At the booth we will perform a side-by-side demonstration of an image output as an HD-SDI signal from the player to the HVE9200, encoded in AVC/H.264, output as SDI, then decoded by the HVD9100S on one monitor, and on the other monitor, an image passed through the HVE9200, so that you can compare the two and see the difference in delay and resolution.

The selling point is that with the previous AVC/H.264 compatible HDTV/SDTV encoder/decoder [HV9100 Series], the delay time was within three frames, but this new product can use intraframe compression thanks to the new LSI, so it boasts a shortened delay of as little as 33 msec, the space of one frame. Mr. Minoru Shinohara, head of the Digital Imaging, Multimedia, Business Planning, and Product Planning departments, explained, "After the 33 msec super short-delay, we are aiming for an international link-up."

Mr. Shinohara went on to say that with the improved resolution in spite of the reduced frame rate, "we can appeal to the overseas broadcasters who use a low bit rate." Furthermore, the low bit rate and high resolution by themselves will not allow for transmission at a 33msec delay. Mr. Shinohara explained, "One product has both the low bit rate, high resolution functionality and the short delay functionality, but because there is no way to use both functions at the same time, we would like the product to be used properly, making use of each function separately."

Also, this model is compatible with power saving technology and has added a two-fold power source.

Because the [XVE9300] is a 2 channel AVC/H.264 encoder, it is capable of things like simultaneous broadcast of two types of material and 3D broadcast. It will be debuted at the Inter BEE 2011. With two full HDs, each with better resolution than the common half-HD side-by-side model, in one encoder, it can even link up with something like a sports event being photographed by multiple cameras and transmit 3D images in realtime.

At the booth, an HD-SDI signal from two cameras will be fed into one XVE9300. We will demonstrate the image encoded by an XVE9300 AVC/H.264 encoder and simultaneously received, decoded and output to a monitor by two HVD9100S models.

The [HE5100S] is an HDTV/SDTV MPEG-2 encoder compatible with both ARIB STD-B37 digital subtitle transmission and ARIB STD-B39 current voice control mode. At the booth, we will demonstrate an HD-SDI signal output from two players, encoded by two HE5100S units, then multiplexed, OFDM modified and output by RF to a monitor. We will also use a subtitle inserter to demonstrate subtitle display.

Mr. Shinohara had this to say about this product's strength, "this product's specialty is that it allows broadcasters to output subtitle ES from archived programs with included subtitles." Given the guideline set by the Ministry of Internal Affairs and Communications that all broadcast television programming capable of being subtitled should be subtitled by 2017, he said, "subtitle compatibility will become extremely important in encoders."