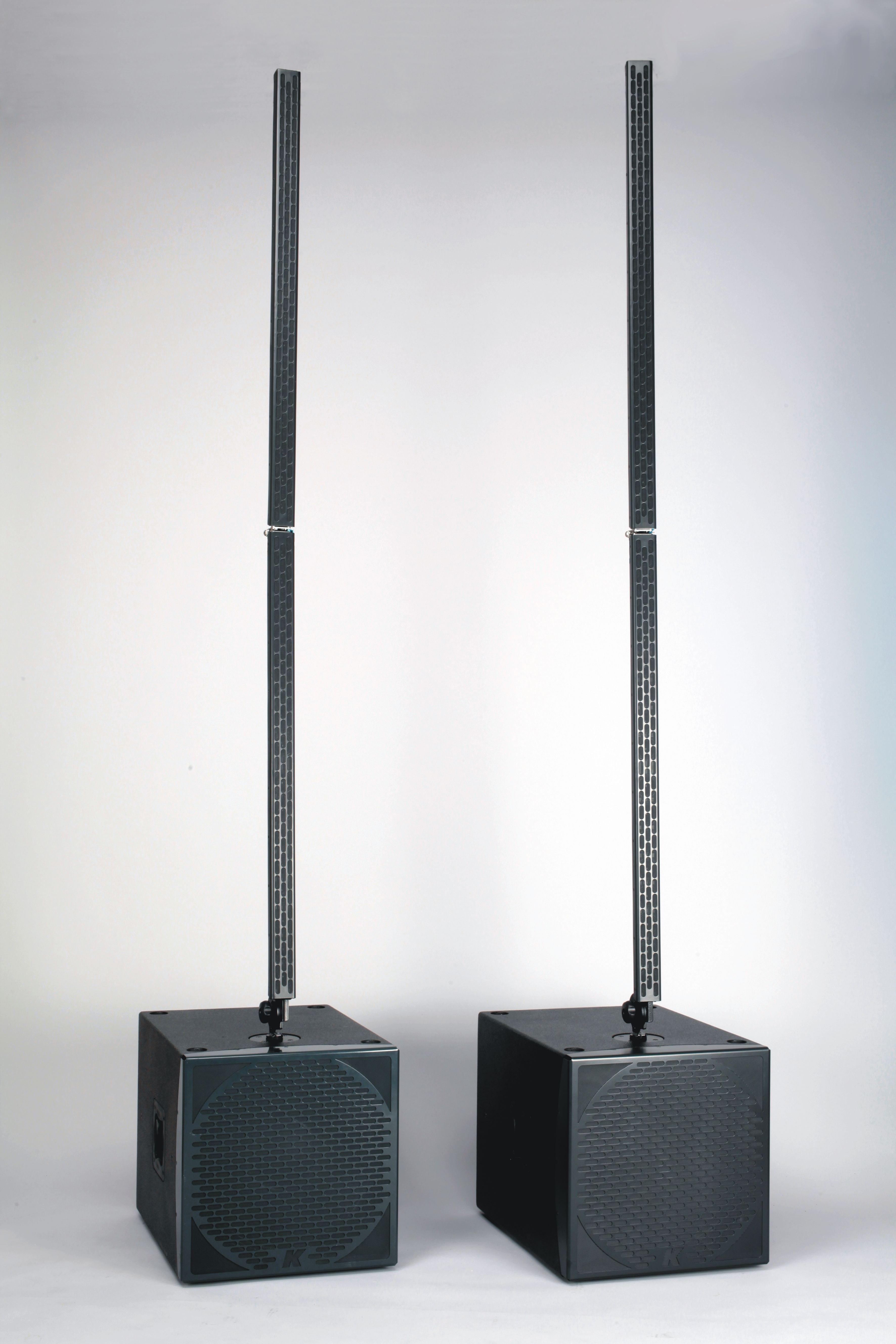 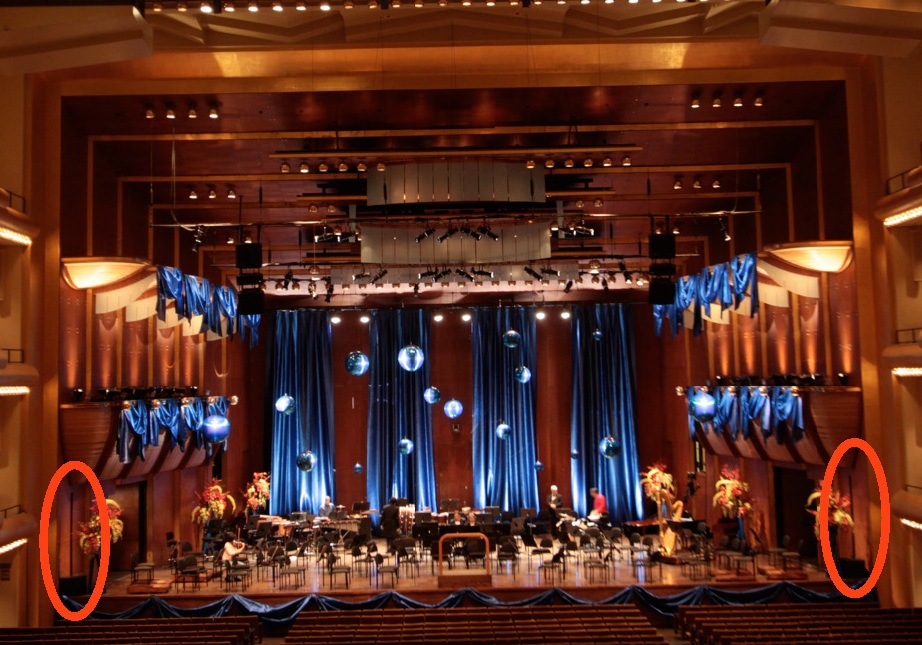 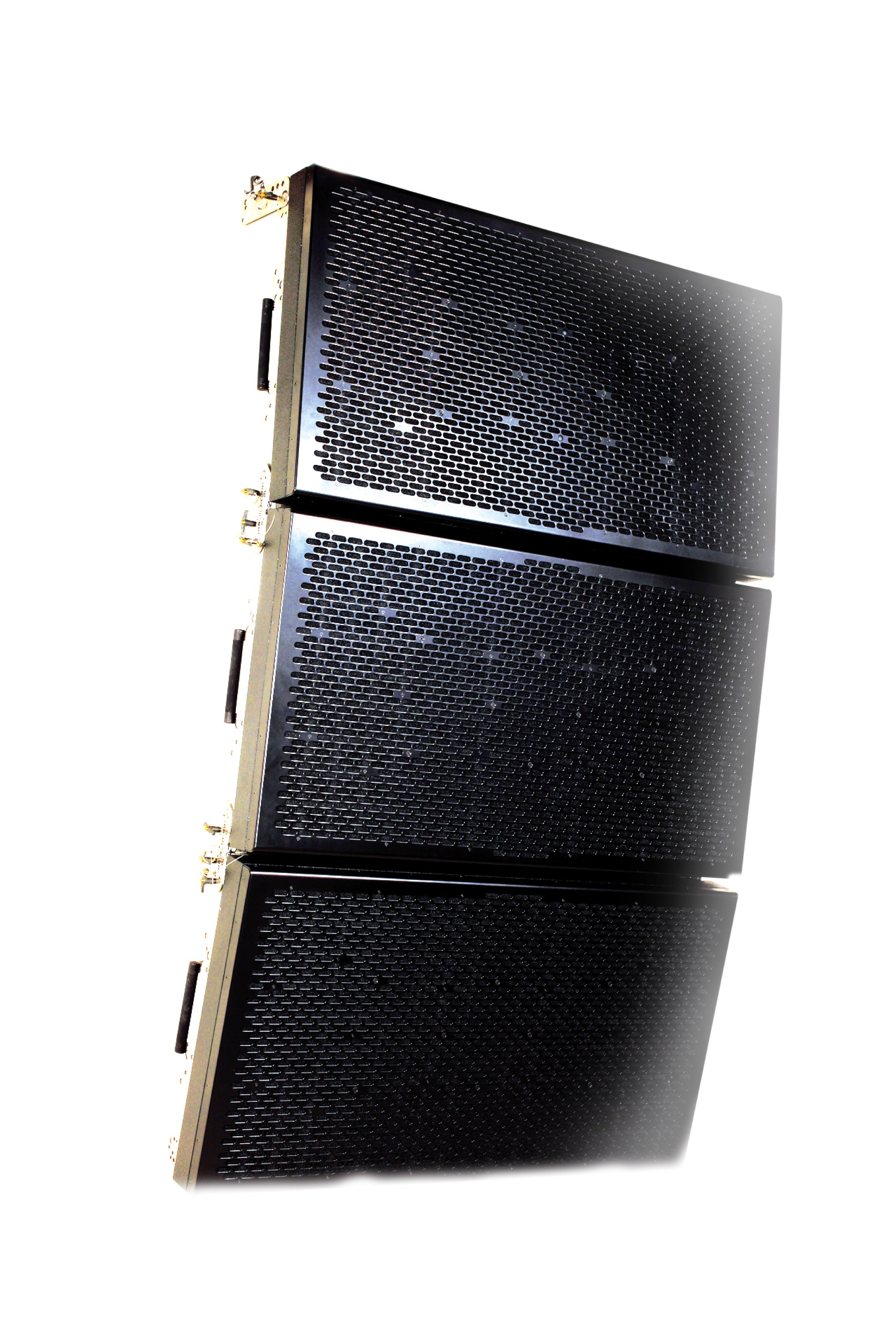 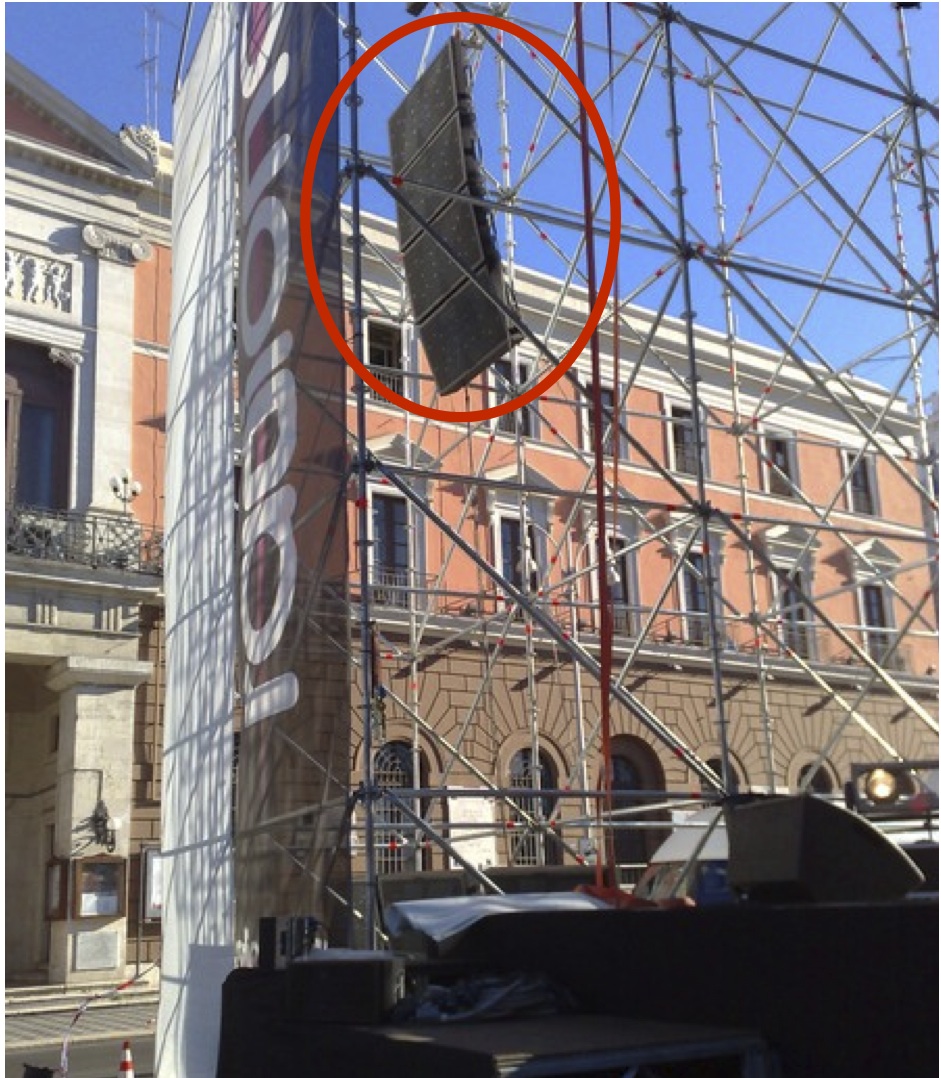 Example of outdoor use (the KH4 is inside the red circle)

Osaka-based Livegear, which specializes in stage audio and lighting equipment, will be presenting their Italian-made speaker brand 'K-array' at their InterBEE 2011 corporate booth.
K-array is a brand that was created in Firenze, Italy. Its unique design was born from the need to maintain sound quality while simultaneously being conscious of the scenery during concerts and music events held in historic, cultural buildings such as churches. There are three categories of products: concert market, equipment market, and portable market.

In June of last year, Livegear signed a sole distributorship agreement and began selling their K-array 'Redline' portable speaker series in Japan.
The 'KR200s' of the same series are made up of a subwoofer for low end and line array speakers that stick out like bars from above for high end. Because the subwoofer includes a power amp, it can be used as a direct input for instruments and microphones. It features an 18-inch speaker unit as well as a neodymium magnet to reduce weight. Even in its compact space, its quality assured design uses features such as power amp cooling fans to provide cool air to protect the heat-sensitive neodymium magnet.
Inside the line array speakers of the high end area are 32 2-inch treble units. An array coupling sound can be achieved by arranging the speakers in a single line.
The internal power amp is capable of outputs of 40Hz~19KHz, continuous 127dB, and peak 133dB. With the installed DSP, 16 data presets can be stored. In addition, remote control is possible through an RS485 connection from an external PC.
At 9kg for the treble equipment and 20kg for the bass equipment, it can easily be loaded and transported even in a compact car.


★The craftsmanship of Firenze, a city of culture
★Widely used even at live concerts in sacred buildings

Regarding the impact in Japan, Tomohiro Hasebe, who was directly in charge of domestic sales negotiations in Firenze, explains, 'K-array speakers were originally designed to match the interior atmosphere of buildings such as churches while maintaining sound quality. Its uniquely Italian, elegant design prevents it from standing out and provides it with a conveniently portable shape. Even in Japan, they are popular in relatively mid-size halls and event spaces. They have even been used for a show with 600 people where circumstances restricted speakers from being placed in front of Buddha statues for a live concert using the main hall of a Tokyo temple. This design that incorporates culturally Italian construction is even being brought to life here in Japan.' He goes on to say they have already sold over 30 sets to date.
Mr. Hasebe also explains that they are well received for the fact that their discrete design 'does not interfere with stage fixtures.'
'There are occasions where, for stage art and broadcast sets, speakers do not necessarily fit with staging intentions. These speakers are well received with those involved in theater and broadcasting because they do not interfere with artists or the dramatic effect of the art on stage.' (Mr. Hasebe)
As a special use, by permanently installing an ultra-slim treble unit in the stage, it is possible to improve the viewing environment for guests in the front row.


★Also presenting KR400S, the largest K-array model
★Designed with transport and arena use in mind

At InterBEE, in addition to these products, KR400S, the largest model from the K-array portable 'Redline' series will be presented. In addition, 'K-array KH4', speakers designed for arena class, large-scale spaces, are scheduled to be presented. KH4 features a thin shape that is easily transported despite being a large, arena compatible speaker.

In addition to the previous products, Livegear is scheduled to present LED lighting at InterBEE. Mr. Hasebe expressed his goals saying, 'Reliability is essential for LED lighting. We want to provide a quality product that can be used for 5 or 10 years. We'd like to establish our brand by having our product used extensively in broadcast stations and public halls. There are even examples of our products being used in places like public broadcast stations. We would like to continue to provide our product as a staple in stage lighting.'
The company's LED lighting design is aimed at producing sufficient light from 1W LED bulbs through proper arrangement. Regarding this, Mr. Hasabe explained, 'Places like broadcast stations and stages have a need for stable lighting that can be used for a long period of time. By increasing the power of LED bulbs, we aimed for a product that could provide performance at low power rather than impair durability. Additionally, for the sake of low power, we achieved a compact design that controls heat generation without including unnecessary equipment such as cooling fans.' Though components are produced abroad, Mr. Hasebe claims his company 'has designed frequency settings based on things like flicker and a uniquely Japanese platform compatible with voltages of 100V.'