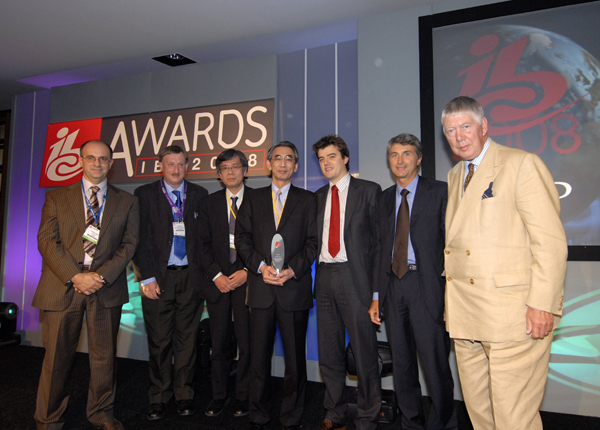 Many IBC2008 visitors saw the remarkable demonstration of Super Hi-, with the ultra-high resolution coming not just from a local source but from a live camera in London over a fibre connection, and from a server in Torino using two satellite transponders. The technical achievement is so astonishing that IBC elected to present the team involved with a special award.

Super Hi-Vision offers four times the resolution of HD in each direction: an image resolution of 7680 pixels on 4320 lines, with an immersive 22.2 channel surround sound system. Experiencing it is stunning, but it now forms part of international co-operative research between NHK in Japan - which created Super Hi-Vision - BBC, IRT and RAI with support from EBU, a team now known as the Broadcast Technology Futures Group.

NHK also won the IBC special award for the first international transmission of Super Hi-Vision content. Achieving this has called for considerable investment in time and technology by a large number of organisations.

In Central London there was a live Super H-Vision camera high above the River Thames. The BBC - along with its technology partner Siemens IT Solutions and Services and SIS Live - operated the camera and sent video and audio over the London fibre network, compressed using MPEG-2 at 600Mb/s. Cable&Wireless carried it over an ultra-broadband fibre from London into the RAI Centre in Amsterdam.

In Torino, Italy, RAI was operating a Super Hi-Vision server, feeding into a unique compression engine, using 16 encoders in parallel to compress Super Hi-Vision's native 24Gb/s to MPEG-4/H.264 at 140Mb/s. Eutelsat was providing two full satellite transponders to carry the signal to a downlink on the roof of IBC.

The award was presented on behalf of the partnership to Dr Keiichi Kubota, director general of the Science & Technical Research Laboratories of NHK. "It is a tribute to the alliance of forward-looking companies working on this project," he said. "I know that my colleagues at the BBC, RAI and EBU will join me in thanking our industry partners - Cable&Wireless, Eutelsat, Siemens and SIS Live - who are investing heavily in broadband and satellite capacity over an extended period to make this work."