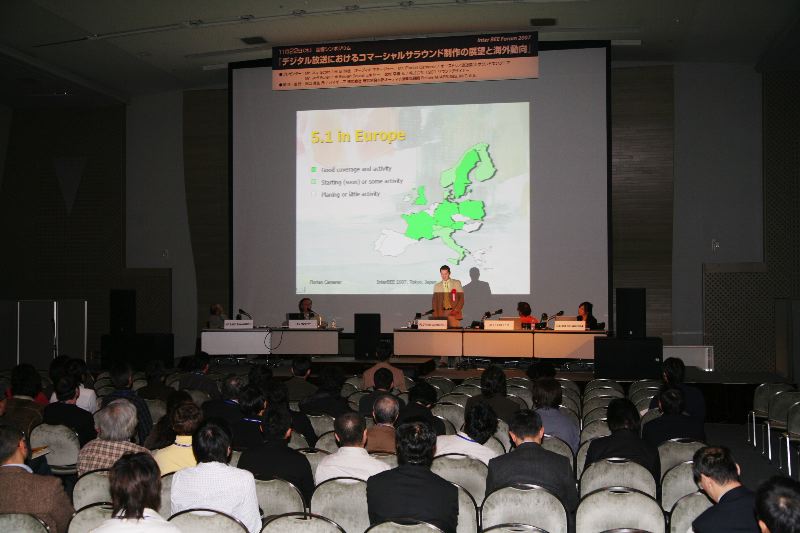 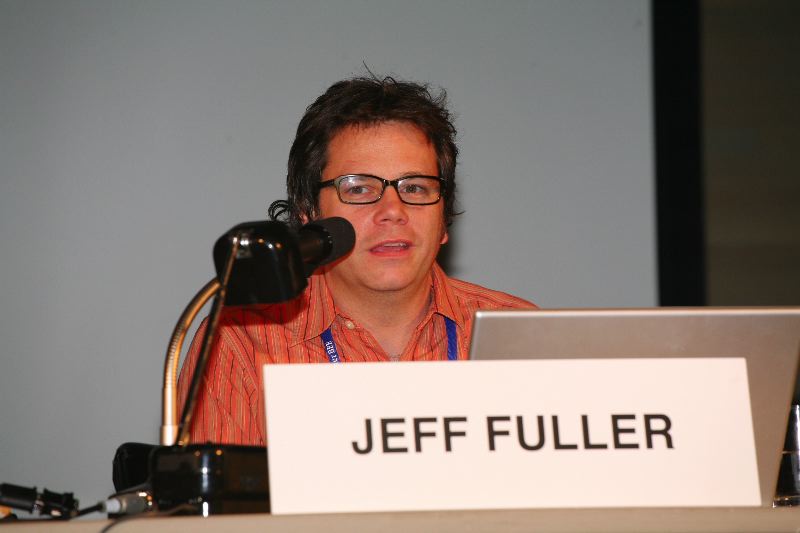 
3-1 5.1 channel sound in television commercial advertising from the point of view of content creation: A revolution in commercials
Rod Findley, c.2k

At first, we had requested that Rod give a talk about the effectiveness of surround-sound from the point of view of commercial directors, but because his second child is expected in November, he said that if he wasn't there for the event, he'd end up getting divorced! At that time, Rod mailed saying that he can ask his partner Jeff, who is a commercial advertising mixer, to take over if needed and as was expected Rod ended up having to go to the birth just before this event. Therefore, we urgently contacted Jeff, who is a mixer in the Santa Monica commercial studio called 11-Sound, asking him to come. In the second half, I will introduce a condensed version of Jeff's talk, which summarizes the thoughts of creators from Rod's preliminary draft.

In the United States, only five years ago, the idea of using 5.1 channel surround-sound mixes in television commercials was considered far too expensive, as well as being unnecessary. Of course, commercials for theatrical release required 5.1 mixed sound, but it was thought that there was no realistic need or market for its use when restricted to television advertising. So how have things changed now?

In the last few years, the ratio of 5.1-channel mixed sound has leapt dramatically. It is used not only for "Super Bowl" types of advertising, but also for normal advertising. Clearly, the growth of surround-sound mixing is not unconnected to the growth in HD televisions, digital broadcasts, or the attendant home theater systems. We have great expectations for the growth of commercial sound, as well as the business of installing this equipment.

Advertisers have become increasingly aware of the necessity of creating products that use this technology to the maximum extent possible.

I started with work using surround-sound when working as a director of a DTS sound trailer. The client for this job, and its editor was none other than Jeff Levison, who has spoken at Inter BEE a numbers of times about sound-related issues. Standing beside him before a mixing desk at the major Hollywood mixing company Todd-AO, mixing an orchestra score with top-quality sound effects was for me the ultimate learning experience, and it is no exaggeration to say that for me, this experience opened my eyes to the possibilities of 5.1 channel sound. As you are all aware, venues have carefully controlled audio environments, therefore there is much more flexibility in displaying one's creative capabilities.
Work for the much more restricted television audience is a more difficult proposition. The majority of television viewers hear sound that is coming through lower quality television speakers, because they are not reaping the benefits of a system that is capable of playing back 5.1-channel sound. Accordingly, this always requires a balance between mixing, that maximizes use of 5.1, and that maintains the consistency of two-channel stereo.
Stereo mixing is the standard, whereas 5.1-channel is created at the next stage if required by clients and agencies. However, for many commercials, even if not urgently required, 5.1 mixing is becoming standard.

Agency creators and directors are starting to envisage in advance the possibilities of 5.1-channel sound, and are starting to incorporate this in the creation process as a whole.

In my experience, the final HD commercial release for Tecmo and Sony Playstation 3 video game Ninja Gaiden Sigma that I have directed required the creation of a 5.1 channel mix in addition to a stereo mix.
We strongly promoted production of the commercial in 5.1 channel sound because c.2K is not just a creation company but also is a creative agency. The reason for this is that as a creator on the floor, I felt that production using 5.1 channel sound was essential because the concept for this commercial clip was based on the very dramatic, cinematic experiences of the game.
Actually, for someone such as me involved in the television commercials industry, the new horizon of 5.1 is continuing to open up ahead of us. A greater number of clients, agencies, and directors are starting to become aware of the enormous possibilities as regards creative expression using 5.1 mixing, and we are seeing a continuous increase in the quality and depth of commercials. Furthermore, we are sure to see the evolution of commercials that provide a full-dimensionality of visual and audio experiences, which up until this point, have not been seen.

3-2 From the point of view of CM surround-sound mixing
Jeff Fuller, 11-Sound


I work as a mixer at 11-Sound, which is situated in Santa Monica, California. This has two mixing rooms, both of which support creation of sound ranging from stereo through to 5.1 channel surround-sound. For equipment, we use Pro Tools HD3, and Procontrol. Monitor speakers are Genelec for the front, with M&K for the rear LFE surround.

I will talk about changes in the creation of sound for television commercials. Four years ago, only one or two commercials per month were created using surround-sound, whereas now in 2007, the transition of television towards HD has resulted in 25 to 30% of our work being in surround-sound.

I will show you a demonstration.
This is a commercial for the Pioneer KURO, mixed for screening in cinemas, and on television.
This time I will demonstrate the one for television.

An issue in television commercials in the United States is that there are no audio technical standards for delivery to broadcasters. There are examples where after post-production is completed, there are differences between the sound standards for the commercial received by the producer, and those used at the broadcaster. Accordingly, screening these commercials without remedying this issue can lead to their complaining to us "why was the sound so low on our commercial that was screened during tonight's baseball?"

Here I will explain the mixing sequence. First, data is delivered as an OMF file, this is loaded, along with the edited images. Next, the sound elements required for sound design are readied. Then, after narration and speech recording, a rough mix is created for client approval.

This is where we can exercise our abilities. We then evaluate each sound element to determine which are the most important sounds in the commercial, by asking whether the focus is to be on sound effects, music, or voice, and make a pass to ensure that voice and narration are situated appropriately in the center. First, I complete the 5.1 channel mix, then listen to the Lt/Rt mix and make fine adjustments. When reverb and effect components are sent to the surround, we listen to the Lt/Rt sound and adjust its spread. If we do not do this, then the phase difference between these is likely to lead to canceling. Another point of note in mixing is ensuring that there is a full low range. This is important, even when not relying on an LFE.

Next, I will talk about the plug-ins used. I use a Digidesign EQ3 plug-in as standard. Before selecting this, I carried out a number of blind tests of plug-ins, but the natural high range of the EQ3 was what drew me towards its selection. I also found the Sony Oxford EQ superb, but I think this is mainly suited to use as a music equalizer.
For reverb, I principally use Altiverb from Audio Ease, mainly because it has a wide range of sound simulation functions, meaning it is very versatile. Here, I also import presents from Lexicon PCM, which was previously my favorite. The strong point of this plug-in in is that it enables the download of the latest impulse response data at any time from the Internet, meaning that my data is always up-to-date.
For compressors, we use focus light and Waves. Waves seasons the sound slightly, but in the surround pass, L1 is connected to the surround pass, and L2 to the stereo pass.

Personally, I am overjoyed at the bright future that is opening up ahead of us. In both the United States and Japan, the move over to digital broadcasting has started, and we can provide both audio and visual of a quality that is dramatically better than before. We hope that in the United States as well, small broadcasters will make the switch from analog over to digital.

I have selected some surround-sound commercials from those that I played before, and that I thought particularly good, and even many normal commercials are now being created in surround-sound. If you listen to these carefully, I'm sure you will understand that each and every one of these employs their own new approach.

The process of mixing television commercials requires a wide range of skills from a single person, and these skills include sound design, voice, and audio editing. I feel that this is the value of the commercial surround-sound mixer.