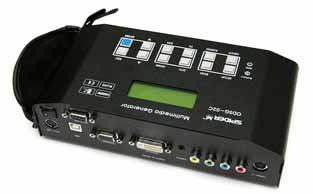 Equipped with a small, portable battery, ODSG-02C can run for two hours in places where no electricity is available. In addition, RS-232C provides remote control capability, enabling users to take measurements of equipment in places with limited accessibility.
In the past, it was often difficult to check video/audio equipment that had been set up either indoors or outdoors due to an inability to connect signal generators to equipment or difficult power restrictions. However, checking the signals of such equipment is critical from a quality control perspective. ODSG-02C, which is portable and does not need to be plugged in to a power outlet, has become widely used in many workplaces.

In addition to digital video signals such as DVI/HDMI and component Y/Pb/Pr, ODSG-02C can output analogue video signals such as RGB, S-video and CVBS.
ODSG-02C is equipped with test patterns widely used for SD and HD formats, and provides multimedia display function for playing video/audio files saved in the built-in HDD.
Furthermore, ODSG-02C is equipped with evaluation features for DDC2B and HDCP. Optional HDMS-200 provides capability to convert HDMI to 3G SDI.