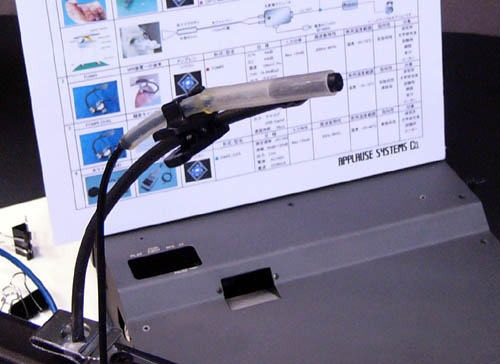 The optical microphone is based on an optical sensor developed by Israel's Ashkelon IT Laboratory, which incorporates the world's first non-magnetic microphone materials. The diaphragm achieves its high sensitivity via silicon membranes manufactured using semiconductor processes to ensure optimum performance. The optical actuator method employs light to pick up delicate sounds, enabling sound acquisition with far higher sensitivity than possible with conventional microphones. And whereas conventional microphones have an acquisition range of approximately 50 - 60cm, the optical microphone has a coverage area of up to 2m.

Audio data acquired using the silicon diaphragm in the optical actuator is transmitted to the optical converter via optical fiber, and then outputted as analog sound. The optical actuator is a mere 6mm in size, and the signal can be transmitted over a distance of 1km by the optical fiber. Additionally, electricity is not used between the optical fiber and the optical actuator to make this explosion-protected technology ideal for hazardous environments. And as no metals are employed, audio can be acquired even in areas with ferromagnetic fields. What's more, because the dynamic range covers 140dB SPL, this microphone can also be used in areas with extremely high levels of ambient sound.
At present, Kobatel is cooperating with overseas high-tech companies in both the technical development and product development of optical microphones, and it has been successful mainly in the medical fields. Nobuhiro Miyahara, Kobatel Executive Managing Director and General Planning Director, says that, "Because optical microphones are not affected by ferromagnetic fields, they are receiving much attention for use in the areas of MRI and MEG. Optical microphones are being utilized in research institutions, university research institutes, laboratories, and hospitals in Europe, the United States, Japan, and in other countries around the world. And in addition to being used as industrial endoscopes in automotive coating processes, these products are gaining attention as explosion-protected sound sensors in hazardous environments."
Domestically, the new market focus for optical microphones is in broadcasting and this is why Kobatel participated at Inter BEE with Applause Systems, as it has a proven track record in retail sales of broadcasting equipment. As such, personnel in the Applause Systems booth energetically promoted the appeal of optical microphones to broadcasting industry visitors at the venue.

Sadazo Iizuka, President of Applause Systems, displayed much enthusiasm about expansion into the field of broadcasting by saying, "Optical microphones are omnidirectional, meaning that they can pick up high-quality sound laterally or even from behind the microphone, and also excel at the acquisition of clear sounds in noisy environments. We hope to utilize these characteristics in the employment of directional mics and high-sensitivity pin mics at outdoor venues such as arenas."