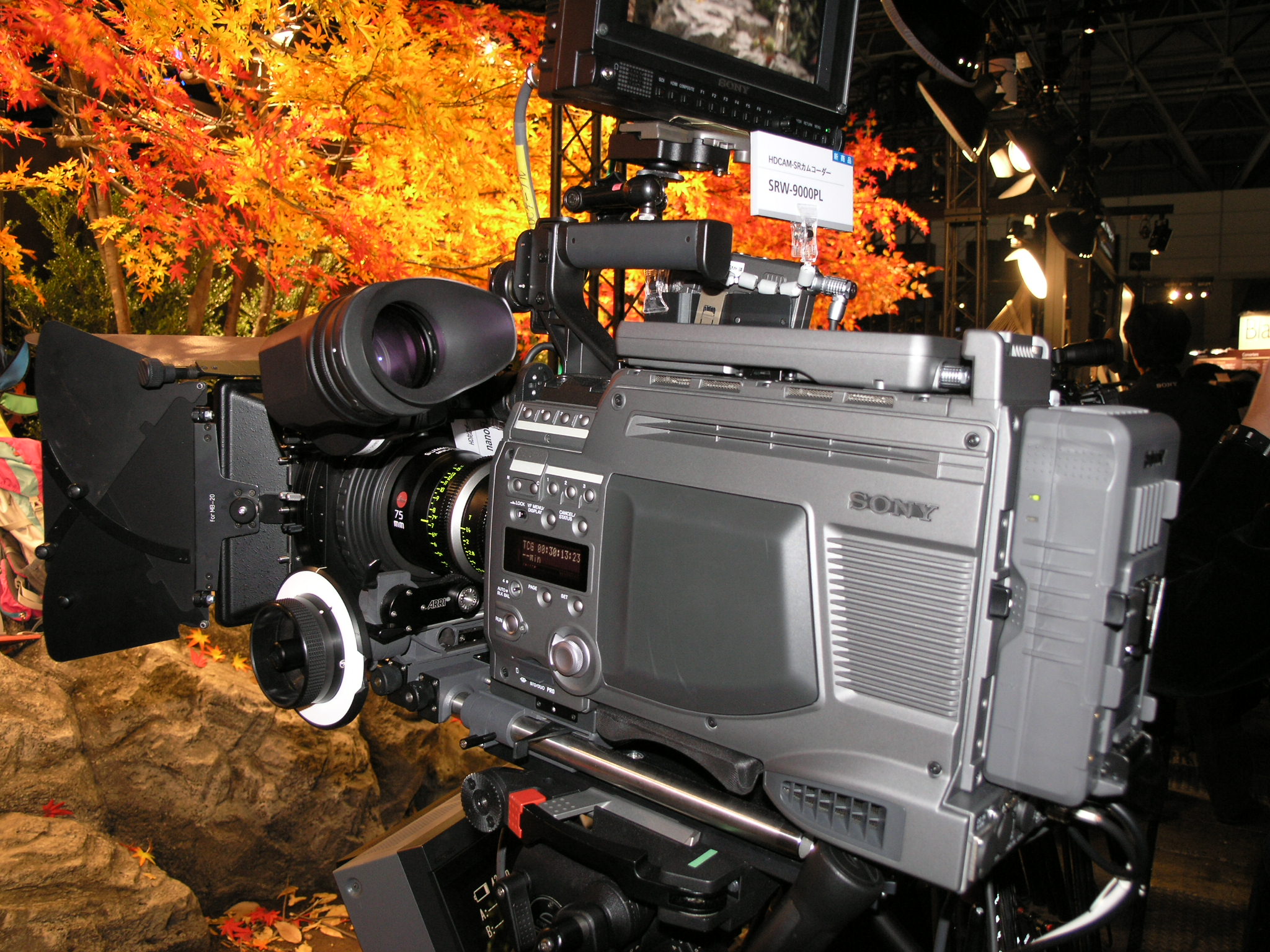 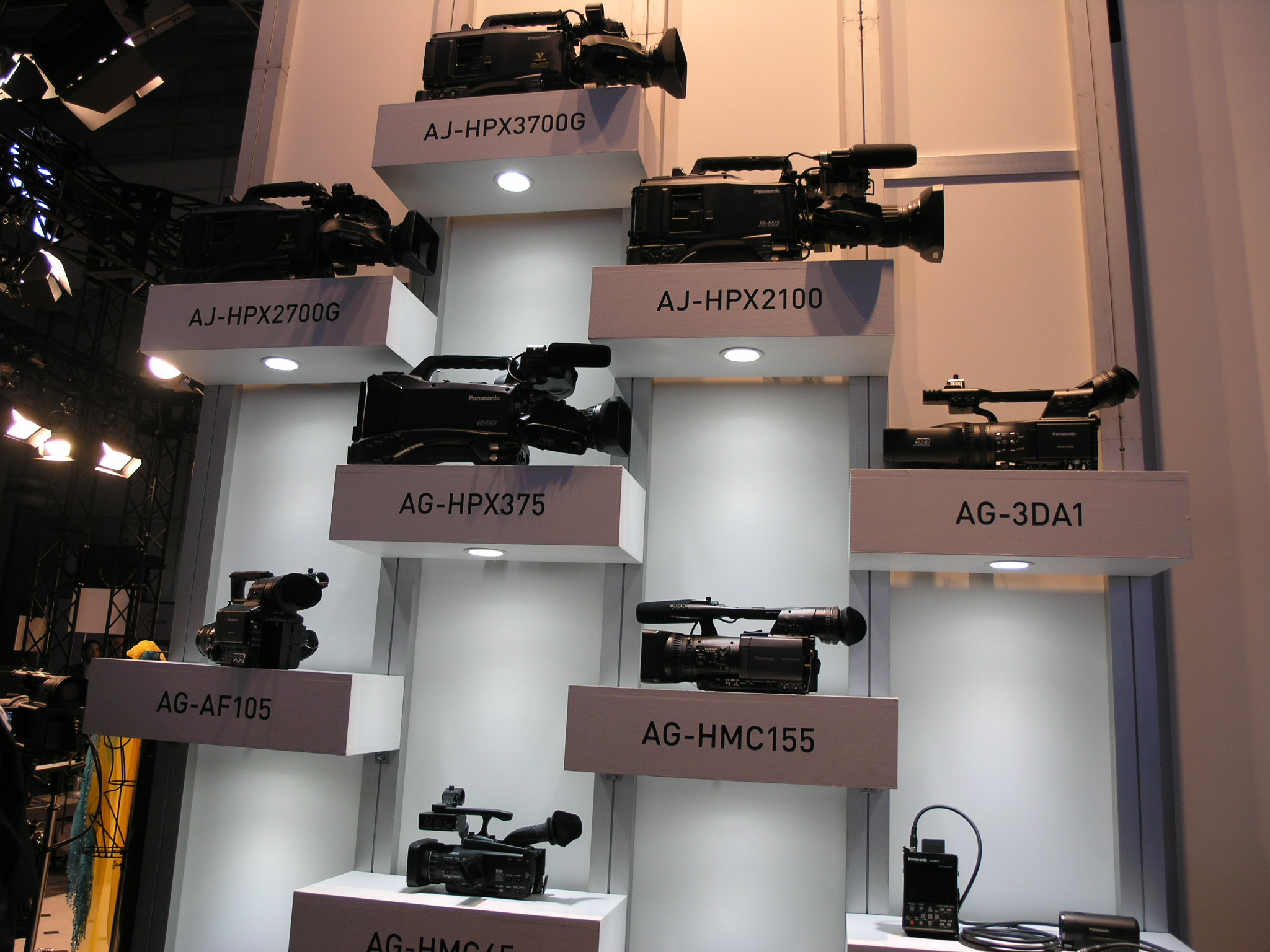 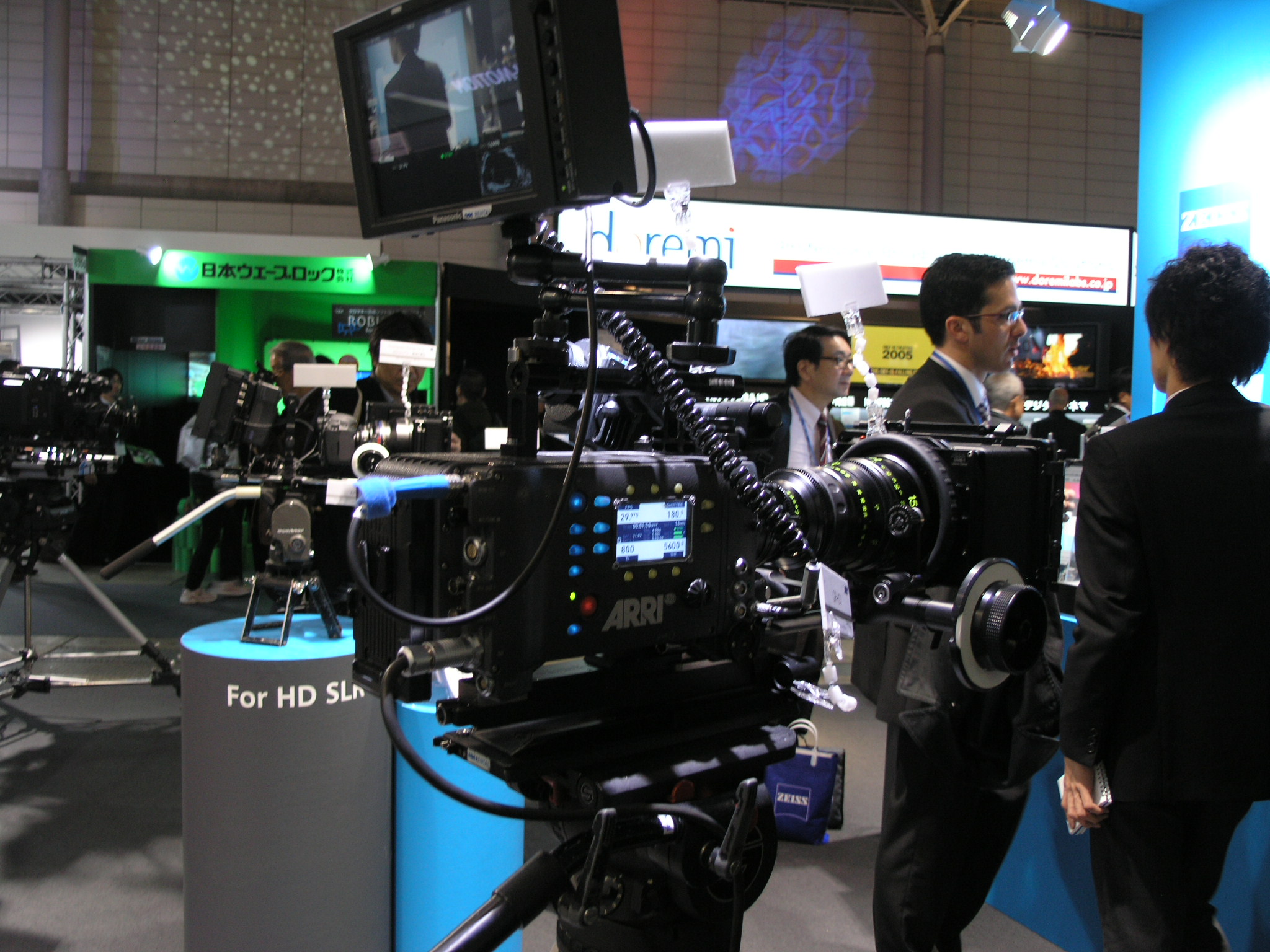 The film-like ALEXA camera from NAC. 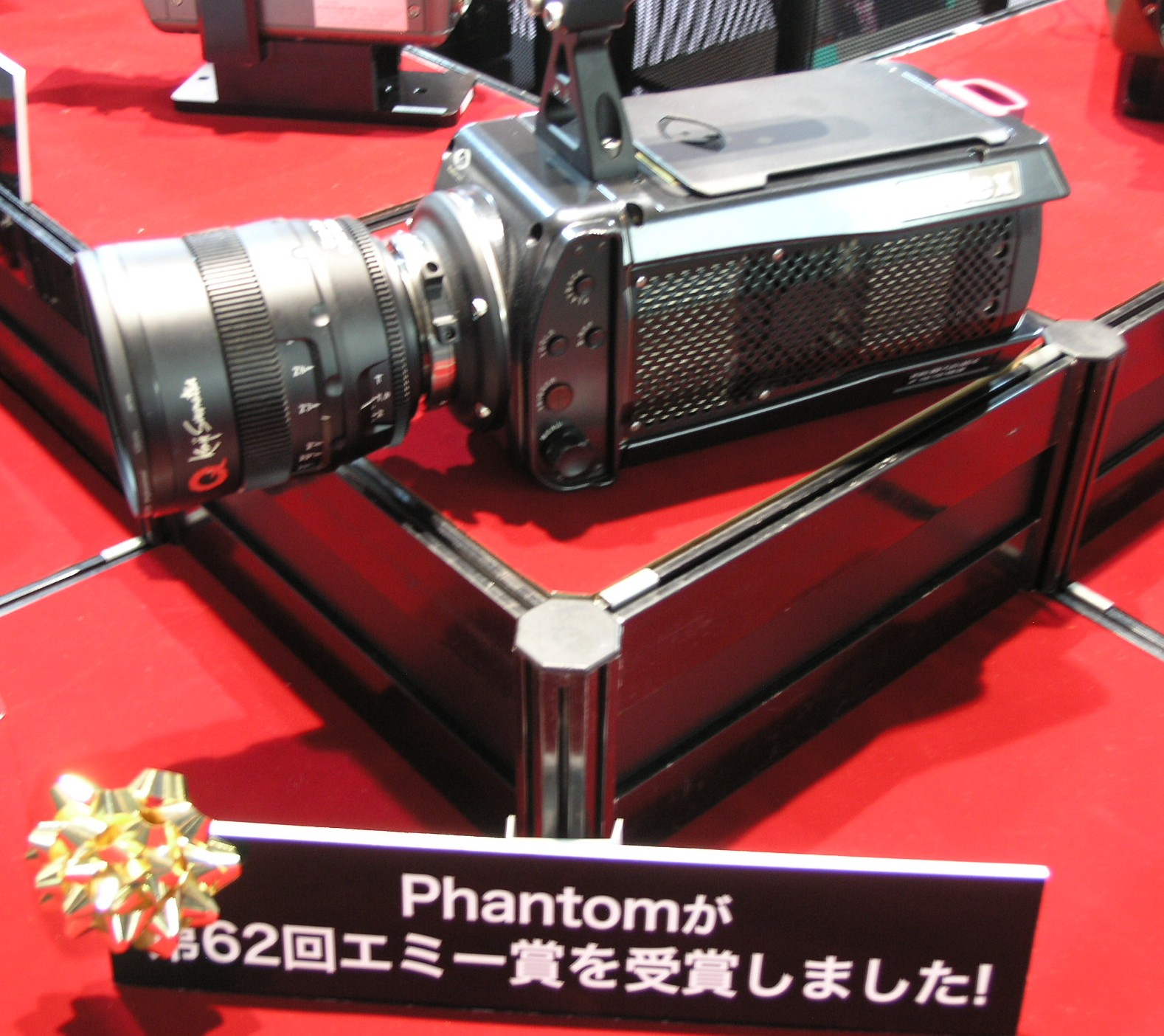 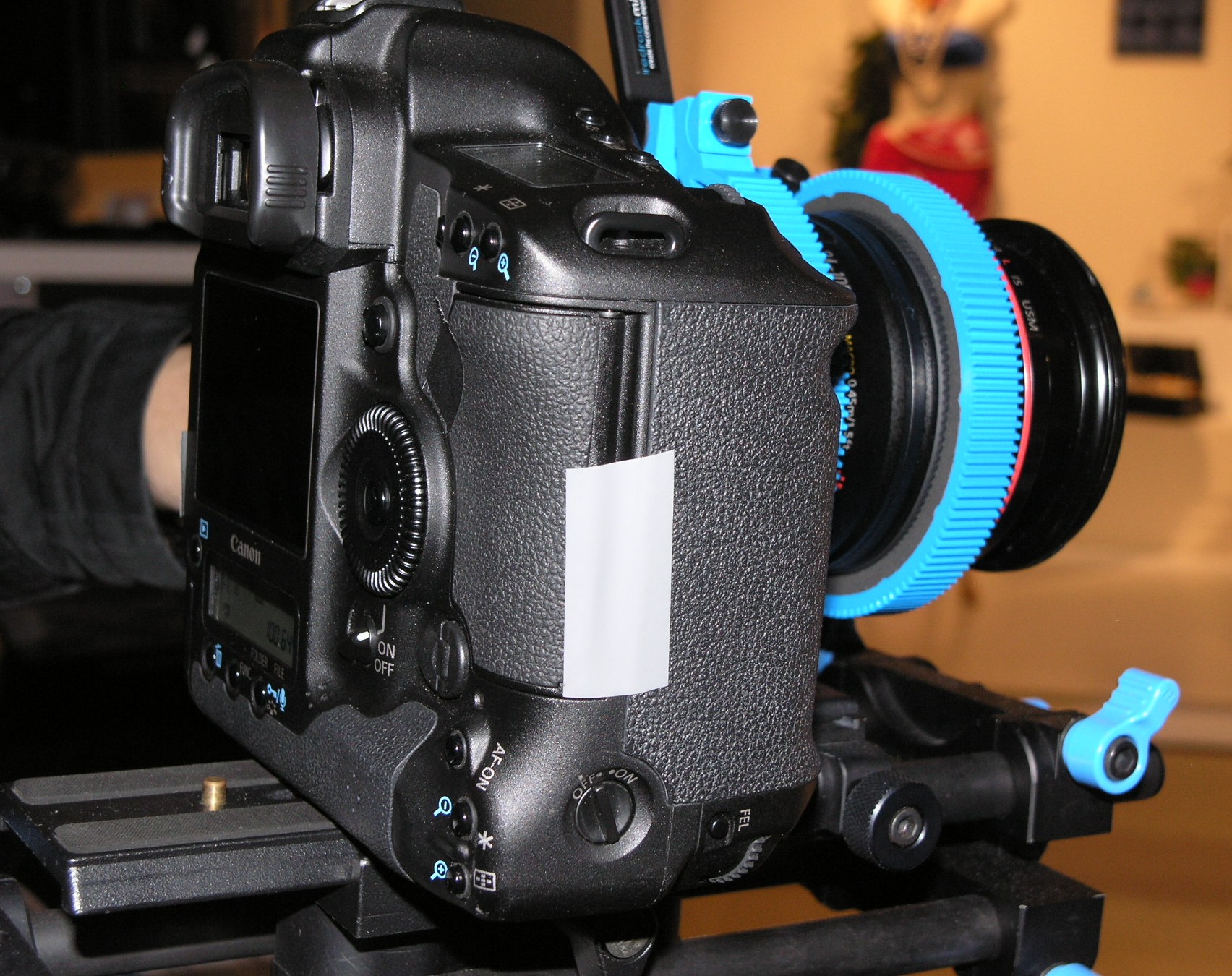 Part 1 of this series looked at the Inter BEE show in general, joint activities and events. This article looks at one of the main attractions at Inter BEE -- the trends in the unstoppable growth of television camera technologies.

While the demand for high-resolution, high-performance high-end cameras is on the rise with the developments in digital cinema in the movie industry and digital broadcasting based on Hi-Vision, TV cameras continue to diversify with the advances in file-based production systems, high-compatibility tapeless cameras and the need for low-cost compact models to respond to tough economic circumstances, as well as developments in digital SLR movie cameras. And since this year has been dubbed the year of 3D, we have seen rapid developments in 3D capable cameras not only for the movie industry, but also designed to meet demands for the burgeoning broadcasting and industry 3D content production sector. Responding to this video media environment, the recent Inter BEE saw exhibits of a range of domestically and internationally produced cameras from a great number of different manufacturers, designed for a multitude of purposes. This article gives general descriptions of some of the more predominant camera exhibits at the show.

Sony exhibited the new model HDCAM-SR, a high-end camera for television dramas and commercial production that features a 35mm equivalent single striped CCD. This camera exhibits superior gradation reproducibility from dark areas through to highlights comparable to a film camera, with excellent blur characteristics, a wide dynamic range, and 1 to 50 fps variable speed shooting capability. Performance of the already highly-acclaimed memory camcorders has also been taken to a new level. These full-HD 3CCD devices feature SxS memory card for recording MPEG HD422 and can be linked up as they are to the increasingly popular MXF file-based production systems. Low-priced compact digital camcorders were also on exhibit at Sony. These PL mount cameras use the newly developed super 35mm size single CMOS, and offer high-sensitivity and shooting in low luminosity with low noise, and are compact and energy-saving with a high degree of functionality. In contrast to the existing high-end model (F35), these cameras are most likely to be deployed in low-budget movie, drama and music video production.

Panasonic exhibited a rich lineup featuring their middle-class P2 memory card camera recorder. P2 uses the same 2/3-nch CCD of the high-end devices, and achieves a high SN ratio and high-sensitivity with AVC Intra 100 for 10 bit/4:2:2. The camera offers wide-ranging applications with its high-performance, and reduced weight and power consumption. Panasonic's AVCCAM Series digital camera recorder exhibit featuring a 4/3-inch MOS sensor designed according to their SLR camera standard (Micro 4/3) was also one of the more popular exhibits at the show. Compared to conventional CMOS, this technology makes better use of the light and offers a wider dynamic range with lower noise and good reproducibility for more natural-looking gradation. Achieving the same depth of field and angle as a 35mm film camera, this product offers rich flexibility in lens use, uses SD memory cards for recording media, and is HD SD movie 24p multi-format compatible. Panasonic also exhibited the Lumix full Hi-Vision movie capable SLR camera. This camera uses a 16 megapixel MOS sensor, with an approximately 0.1-inch high-speed AF for 60i and 24p shooting and recording. Lumix supports a wide variety of lenses - dissolving the boundaries between photography and video even further.

NAC Image Technology showcased an array of cameras, lenses and accessories with the ARRI film camera-like ALEXA PLUS as the centerpiece. ALEXA PLUS uses a newly developed CMOS sensor equivalent to 35mm film size for its imaging device (3.5K resolution), gives cinematic depth of field, features a PL mount for cinema camera lenses, and supports HD/2K/DI (Digital Intermediate). This device delivers video with a film-like look through its characteristic low-noise and wide dynamic range, and camera data can be recorded, or to cameras synchronized for 3D filming. Compact and lightweight, it's robust construction promises applications in a variety of fields, whether they be in movies or television. The company also exhibited its Hi-Motion high-speed camera developed jointly with NHK. This camera uses a 2.2 megapixel 3CMOS setup, and enables high-speed filming up to 600 frames per second with full-HD support. This camera uses progressive scanning to offer high-quality slow motion video for movies, television dramas, and CG synthesis applications.

Nobby Tech presented the Phantom Series high-speed lineup from Vision Research, a US-based company and a regular feature at Inter BEE. These cameras are used all over the world for sports broadcasting and video production, and have recently won an Emmy award for their excellence. The latest models use new sensors (2560 x 1440 pixel), are about six times as sensitive, and are capable of variable 1/3 to 83 times normal speed for 24P/30P with full-HD. These were presented alongside a high-quality model delivering 33x filming speed, and an ultra-sensitive model with 90x filming speed. The company also presented high-quality slow motion 3D video using a half mirror system in the rig with 2 Phantom cameras.

Astro Design exhibited their compact 4K prototype. This uses a 1.25-inch single CMOS (8.9 megapixels), offering QFGA (3840 x 2160) level of available pixels, and is HD-SDI Dual capable. Combined with the company's new 2K uncompressed lightweight and compact SSD (Solid-State Drive) recorder on show for the first time, these technologies show great potential for use in a wide range of video areas. As well as that, Astro Design's top-of-the-range 4K SSD recorder enables 4K video recording and replay in a single unit, or 4 units can be synced together for 8K Super Hi-Vision video. As a company with achievements in the video and broadcasting fields, Photron presented a wide range of equipment and systems this time around, including a 33x high-speed capable full-HD camera that uses a single CMOS (2048 x 2048 pixels). This camera has its own built-in memory, enables instant slow motion replay straight after shooting, and can achieve efficient video expressiveness in a range of areas such as sports programs, commercials and movie production. Photron also demonstrated two of these cameras set up as a 3D rig.

Canon, one of the world's leading HDTV camera lens and SLR camera makers, also exhibited compact file-based digital movie cameras this year. Canon's exhibit featured a camera with a 2.07 megapixel 1/3-inch 3CMOS imaging device that records MPEG2 in full-HD (4:2:2) on a CF card. This compact camera offers high-quality and high-functionality at a low price, and promises a range of uses as an industry camera. Canon also exhibited their EOS Movie SLR camera, a camera with movie filming functions that supports 30/24 fps with HDTV SDTV resolution, using a high-definition large-size CMOS image sensor. As mentioned above, Panasonic also exhibited these kinds of cameras, which suggests that SLR cameras for movies are recently on the increase as a new way to express video. These systems are bound to attract attention in future.