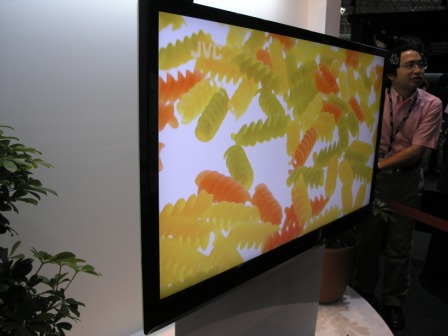 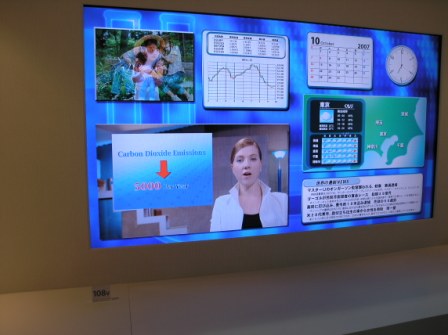 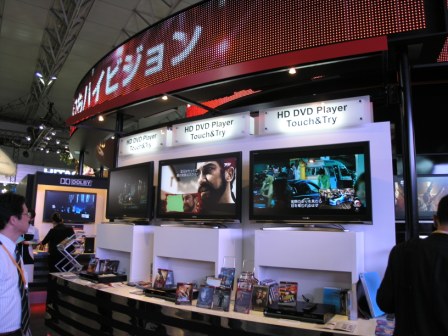 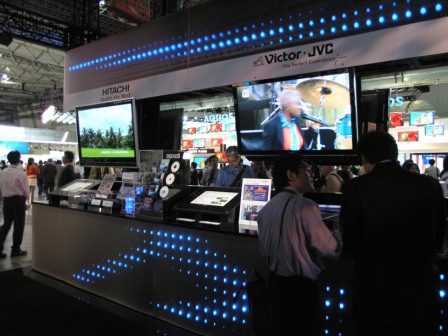 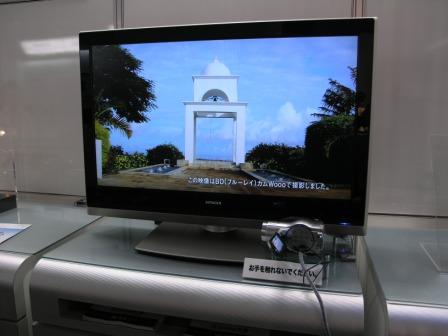 CEATEC Japan is the electronics industry's largest event, and it was held on October 2nd to 6th at Makuhari Messe in Tokyo. Expressing the theme of "Experience the Frontline of Digital Convergence," CEATEC Japan presented the public with a large number of the latest technologies that highlighted the diminishing border between personal computers and audio-visual equipment. Technologies that proved popular with visitors were brilliant flat-panel TVs and next-generation DVDs that were developed to parallel the expansion of digital broadcasting. New mobile terminals for the Ubiquitous Society and next-generation networks (NGN) also attracted interest.

Flat-panel displays include plasma and LCD types, both of which are making the transition to high definition to provide higher resolution and improved image quality. Generally speaking, plasma displays are 50 inches or larger while LCDs are offered in smaller sizes. However, recent technical advancements have made it possible for LCD to be used even for large displays. Each manufacturer exhibited new, eye-catching televisions boasting much larger screen sizes than seen before such as a 108-inch LCD from Sharp, a Sony 70-inch LCD, a Toshiba 57-inch LCD, a Mitsubishi 52-inch LCD, a Panasonic 103-inch plasma display, a Hitachi 60-inch plasma display, and a Victor-JVC 110-inch DILA (rear projection) display.

There were also an increased number of LCD televisions that have corrected former issues such as blurry images. Improvements made to panel materials and construction, the introduction of 120 fps double-speed drivers and inter-field motion compensation by Sony, Victor-JVC, Hitachi, Mitsubishi, and Toshiba have enabled these manufacturers to create models that offer far better video image quality. Many new technologies that allow images filmed at 24 fps to be displayed smoothly and even some models with triple-speed drivers were also on display. Additional innovations included development of a wider color spectrum through the use of LEDs for backlighting, as well as adding crimson to the RGB color range to give TVs enhanced color reproduction. Of special interest were models that offered significantly upgraded image quality thanks to the introduction of new technologies such as further improved backlighting control to better match images, per-pixel gamma correction, 10-bit color, and sophisticated image-processing circuitry. These technologies also help to improve tone reproduction from true black right through to peak white as well as supporting the transition towards higher brightness and contrast levels.

Other popular products included the ultra-thin and lightweight flat-screen models. The 52-inch ultra-thin LCD television from Sharp has a display with a minimum thickness of only 2 cm (with a maximum thickness of 2.9 cm) despite its large size, and a light 25-kg weight. These TVs were displayed so that they could be viewed from both the sides and back, allowing visitors to appreciate the very slim size. Victor-JVC's 42-inch LCD television features only 3.7 cm for the thinnest section and 7.2 cm for the maximum section that include tuner and speakers. Hitachi's 32-inch LCD television was one of the smallest products available, boasting a display thickness of only 1.9 cm to make it ideal for positioning on a small electronics stand or mounted on a wall. All three companies are planning to have these models on the market within the year.

Sony displayed a super-thin organic electroluminescent (EL) television. Several 11-inch models with a thickness of only 3 mm and a 27-inch reference model were displayed on the stage. Organic EL is a display type that emits light upon the application of a current to enable a very thin and lightweight construction. It provides high brightness, high contrast, wider color spectrum, and faster response.

It was reported that this product will be priced at \200000, and while keeping in mind market trends concerning the demarcation of LCD televisions, manufacturers are moving ahead with further increases in screen size.

21-inch Field Emission Displays (FEDs) were exhibited by Field Emission Technologies. These are flat displays that use individual pixels to emit electrons, which are then used to stimulate the fluorescent material. This technology offers both excellent black reproduction and bright peak whites, and uses an impulse driver to shorten afterglow for higher responsiveness. It also reduces image blur, supports high frame rates, and lowers power consumption, making it a promising product ideal for use as a master monitor in fabrication workplaces.

Full high vision television is becoming the mainstream, resulting in many breakthroughs in digital cinema, super-high vision, and ultra-high resolution 4K displays. Sharp has released a 64-inch ultra-high resolution liquid crystal display with 8,850,000 (4K:2K) pixels, which supports both 30 and 24 fps. Victor-JVC displayed a 4K rear-projected image in its booth and in the theater on the second floor, used a new DILA-type 4K front projector to show "Churashima Okinawa" in ultra-high definition on a massive 200-inch screen. A 4K camera weighing only 10 kg is also being developed, achieving a 2/3 reduction in weight over previous 3CMOS (3840:2048 pixel) models. The Ultra-Realistic Communications Forum (URCF) held by the National Institute of information and Communications Technology (NICT) presented a demonstration of 4K ultra-realistic video in the event hall that used Victor-JVC's 4K camera, Astrodesign's 56-inch LCD monitor, and Keisoku Giken's HDD recorder to display live video, as well as down-converted super-high vision video content from NHK.

Another technical topic of interest at this year's CEATEC was the rapid development and diffusion of next-generation DVDs. The two types, Blu-ray Disc and HD-DVD, are engaged in a struggle for dominance that is affecting the entire software industry. The Blu-ray Disc group had their booth painted in blue, with a lineup of the latest models from Sony, Panasonic, Hitachi, Mitsubishi, Pioneer, Sharp, Philips, and Samsung showing videos. Hitachi exhibited the world's first Blu-ray camera that uses an 8-cm Blu-ray disc (BD) as its recording media. This can record and save approximately one hour of full high-vision content on a single Blu-ray disc. The HD-DVD group had their booth decked out in the format's theme colors, and companies exhibiting there included Toshiba, NEC, Sanyo, Hoei Sangyo, Onkyo, and Microsoft. In addition to these hardware displays, video content was also displayed in a theater in the booth, as well as materials promoting HD-DVD.

Displays related to "digital broadcasting", which is the mainstay of the digital era, proved very popular with visitors. In the "Experience! Digital Broadcast Activities Pavilion", JEITA and NHK worked to promote the increasing transition to a fully digital lifestyle by presenting topics such as the history of broadcasting, changes in lifestyles, advances in media, activities of the "terrestrial digital caravan" that is active nationwide, reception of digital broadcasts over cable, and demonstrations of connection and usage methods for various digital equipment such as flat panel displays, video recorders, PCs, and mobile devices.

CEATEC is an exhibition of equipment and systems for consumer and commercial use, and it is closely related to Inter BEE. We hope that you will visit Inter BEE in order to experience for yourself how display trends and the recording equipment displayed at the event can be linked together with broadcasting technologies.