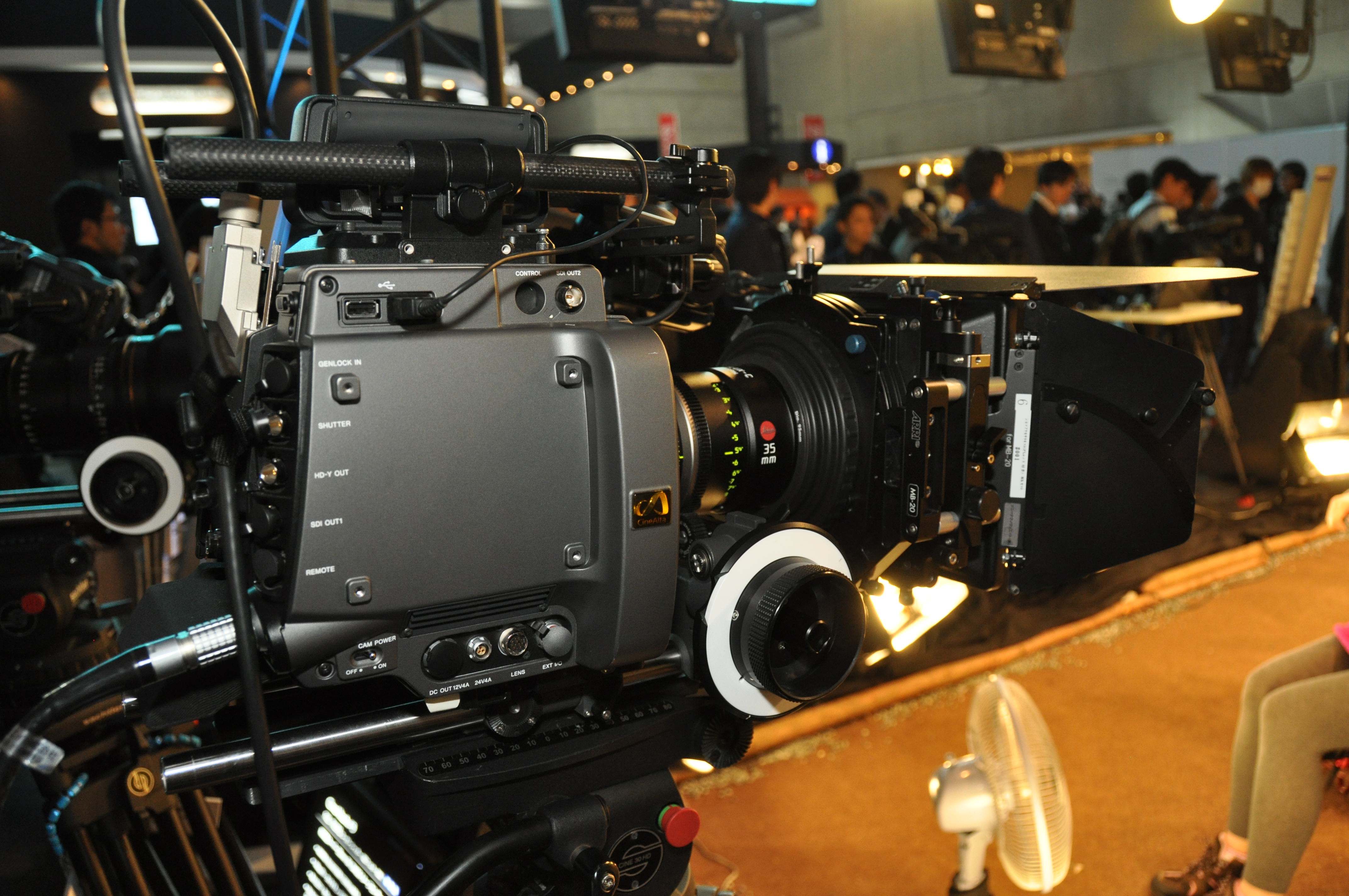 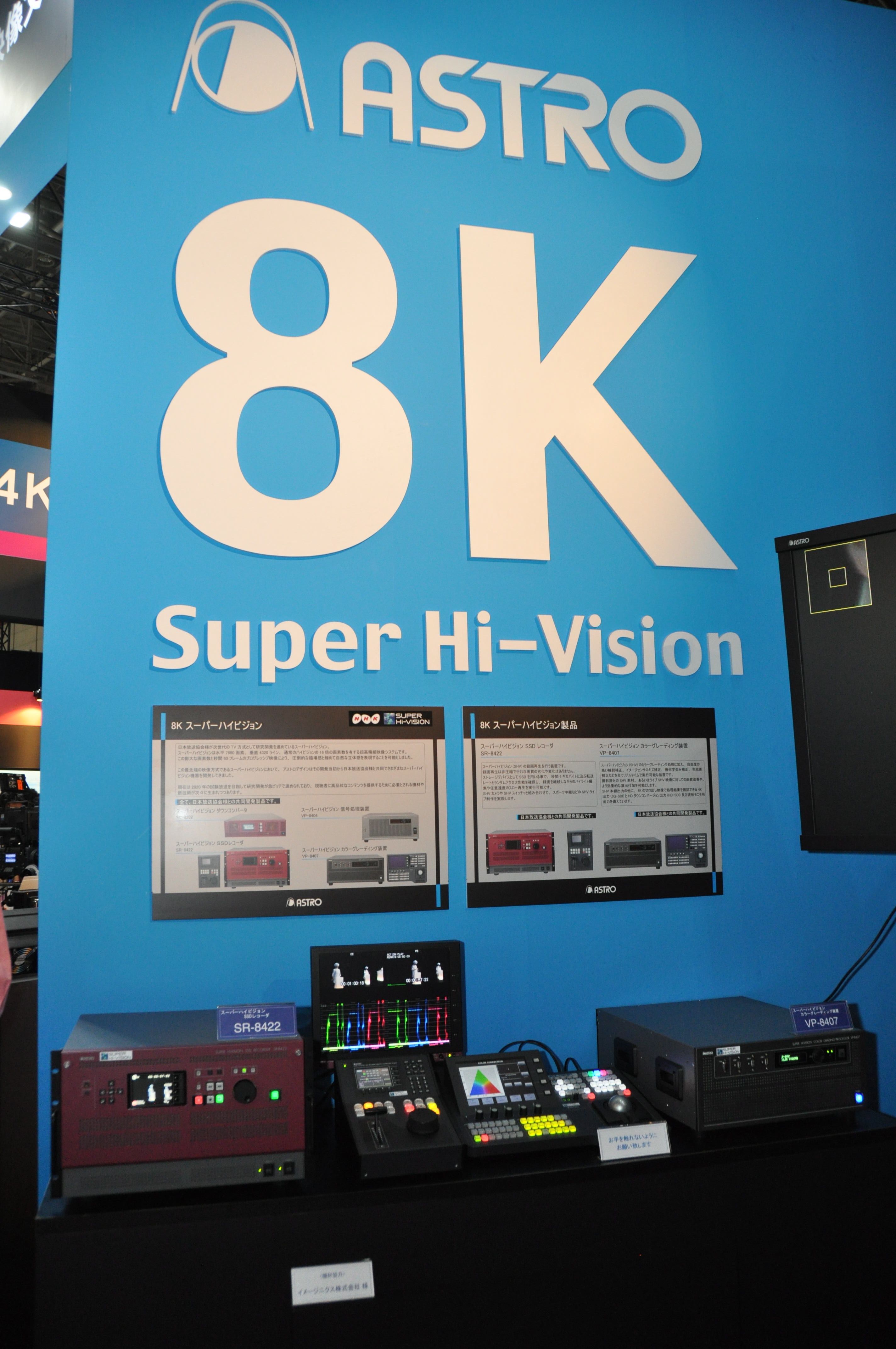 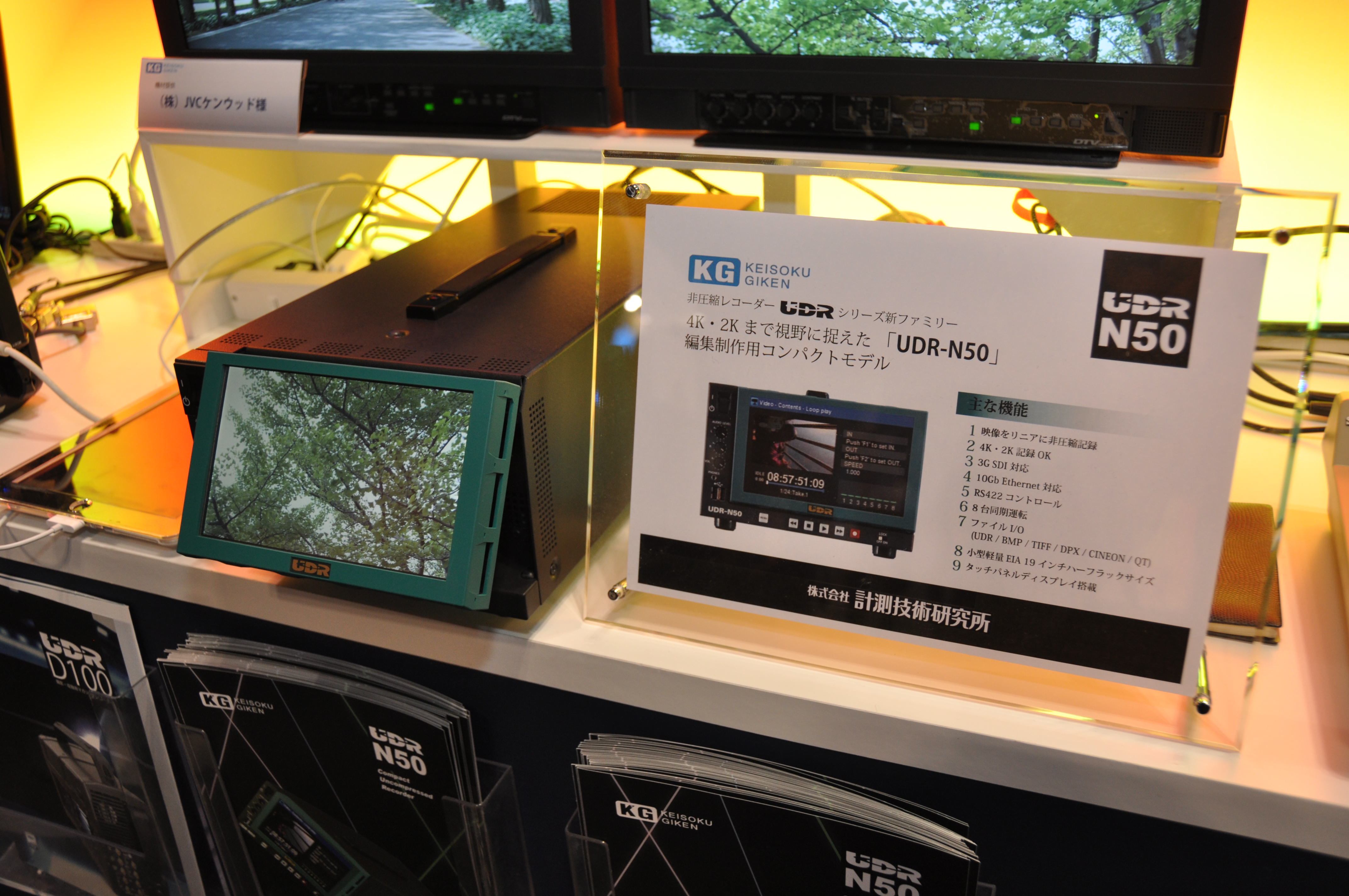 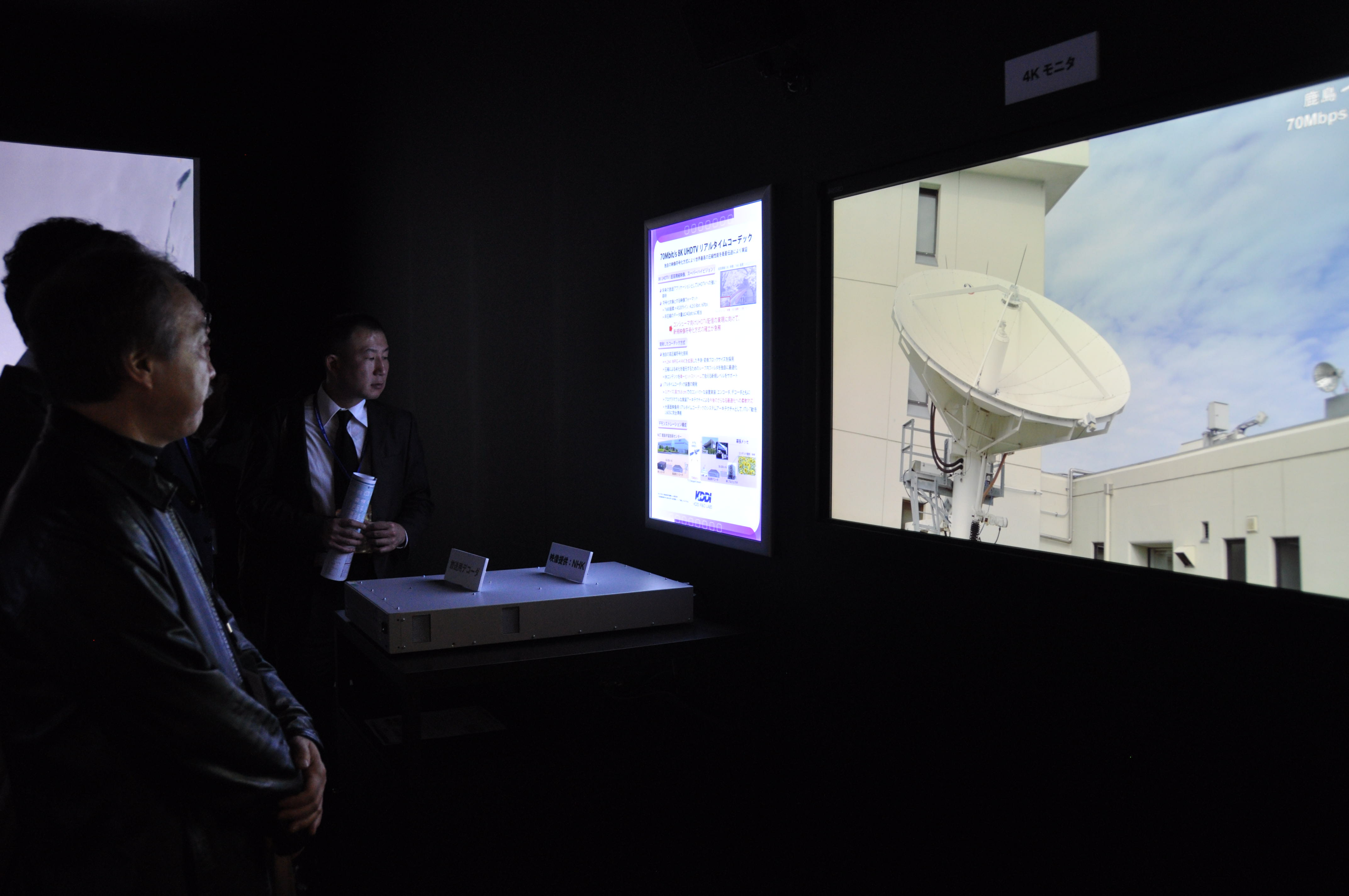 KDDI R&D Labs had equipment on exhibit to compress 8Kx4K to 70Mbps.

4K is surprisingly near. This is the impression I received at the Inter BEE 2011 (Event sponsor: The Japan Electronics and Information Technology Industries Association, Dates held: November 16 - 18). Up until now, it has been said that even though 4K was a technological reality there was no content. This time, however, I was able to confirm that equipment supporting 4K and beyond is starting to come together. 4K is also very compatible with digital cinema. The 4K era seems to be surprisingly close. (Eizo Shimbun Editorial Writer, Koji Suginuma)

■ The chicken or the egg
4K has at least four times the pixel count of the currently used HD and is well within technological reach. At the CEATEC Japan held in October, several home electronics makers had in their exhibits displays with 4K display capability for home use. On the other hand, I didn't see any conversion to 4K in home camcorders, arguably Japanese home electronics makers' specialty.

Even in just the area of 4K displays, not all of the major companies came out with something - only a few makers made a move into 4K. The reason for the sparse support was the observation that, "with the current lack of content, even if 4K TVs were produced they would just go to waste." Toshiba, who displayed their 4K (3840 x 2160) Regza 55x3, applied the high pixel count to stereoscopy (3D-imaging) as well as image enhancing 2D displays with super resolution technology. Sharp, who also displayed a TV with the same pixel count, also applied their image enhancing technology and showed that a high quality picture equivalent to 4K can be obtained even from HD input. Sony, who will release a 4K (4096x2160) projector, also has equipped circuitry for better picture quality from HD input.

Home electronics display makers are trying in this way to put 4K to use. However, no one is producing 4K media or output devices. This makes it hard for home electronics makers to commit all at once, whereas the camera and media side can not commit to development because there is no commitment from the display makers. Things are truly in a "the chicken or the egg" deadlock.

■ Digital cinema supports 4K
One of the big factors in the development of 4K is digital cinema. Digital cinema had largely used 2K projectors but the transition to 4K has been ensured. Screening rooms are not like they used to be with a large area of seats on a gentle slope. Smaller rooms that can hold around 200 people in stair-like, stadium style seating are increasing in number. In rooms like these, the viewers in the back rows are closer to the screen and 2K video quality is sometimes lacking. There is also the aspect that 4K projectors can easily be used for 3D. For these two reasons the move into 4K has become certain for display devices used in digital cinema.

■ Filming is also moving toward 4K
Until now, digital cinema has largely been done in HD resolution (1920 x 1080) or oversampled at much higher resolutions. 4K and higher resolutions were used in some instances, but no one could really say it was mainstream.

What seems to be about to change all this is the Sony F65. It debuted at the NAB Show in April and was formally unveiled at the September IBC as a 4K cinema camera. The crowds around this camera at the Inter BEE never thinned out. Canon, who also announced their foray into the cinema camera market, revealed that they are developing a camera with 4K resolution capability separately from their already developed EOS C300/EOS C300 PL. ASTRODESIGN, who has had a 4K camera on display since last year, had the new model "AH-4410A" in their booth and used the fact that they have a second generation camera head to garner appeal.

According to camera manufactures, because it costs at least several billion yen to develop an image sensor, it would be necessary to either have some idea of how many would be shipped or to have the price increased accordingly. To share the sensor with a digital camera, a static image pixel count of 10M or more would be required. The pixel count for video is around 8M so it would be difficult to simply share them. It is not hard to see how it was a big decision to develop image sensors for cinema use.

■ Support equipment matures
At the Inter BEE, a change was not just visible in cameras but also in support equipment. ASTRODESIGN revealed their 4K JPEG2000 codec HC-7504 right before the Inter BEE. They also displayed their ultra high definition SSD recorder SR-8422, which can record 8K video, and their ultra high definition color grading equipped VP-8407. The SR-8422 is not just a simple record and play back device. It is a multifunction device that can perform highlight editing and slow motion replays while recording. It also can perform real time color conversion, color correction, and more. It is said that this will be used for relay at next year's London Olympics.

KEISOKU GIKEN had on display their UDR-N50, an uncompressed 4K video recorder. It is half rack size, and with good manageability, it looks like it will be used for shooting on location. It also supports 8K through synchronized operation.

That is how the evolution of support equipment looked at this year's Inter BEE. Though few in numbers, it is particularly notable that products supporting not just 4K film making, which assumes cinematic DI process use, but also TV linkups, editing, etc. are beginning to appear.

■ What direction will media take?
With filming and display in the progress of coming together, the heart of the problem will likely shift to media. How will 4K content be transmitted? Will it be stored on Blu-ray, or a new type of media? Will it be broadcast through the air or through an internet connection? The home electronics and broadcasting equipment industries have not put forth any clear plans regarding problems like these.

It is also a fact that there are still elemental technologies that are lacking. For example, in MPEG-4 AVC/H.264, which is the encoding technology (compression) used at the time of transmission and storage, 4K@60p is still unregulated. At level 5.1, currently the highest level, support only goes up to 4K@30p. Encoding methods are just one example of 4K support being sought after.

America's ATSC (Advanced Television Systems Committee) is searching for solutions to connect to the internet in ATSC 2.0 and has already looking at ATSC 3.0. "Input" and "output" are in the progress of coming together for 4K, and if the connecting technologies advance quickly, the transition to 4K could happen all at once.