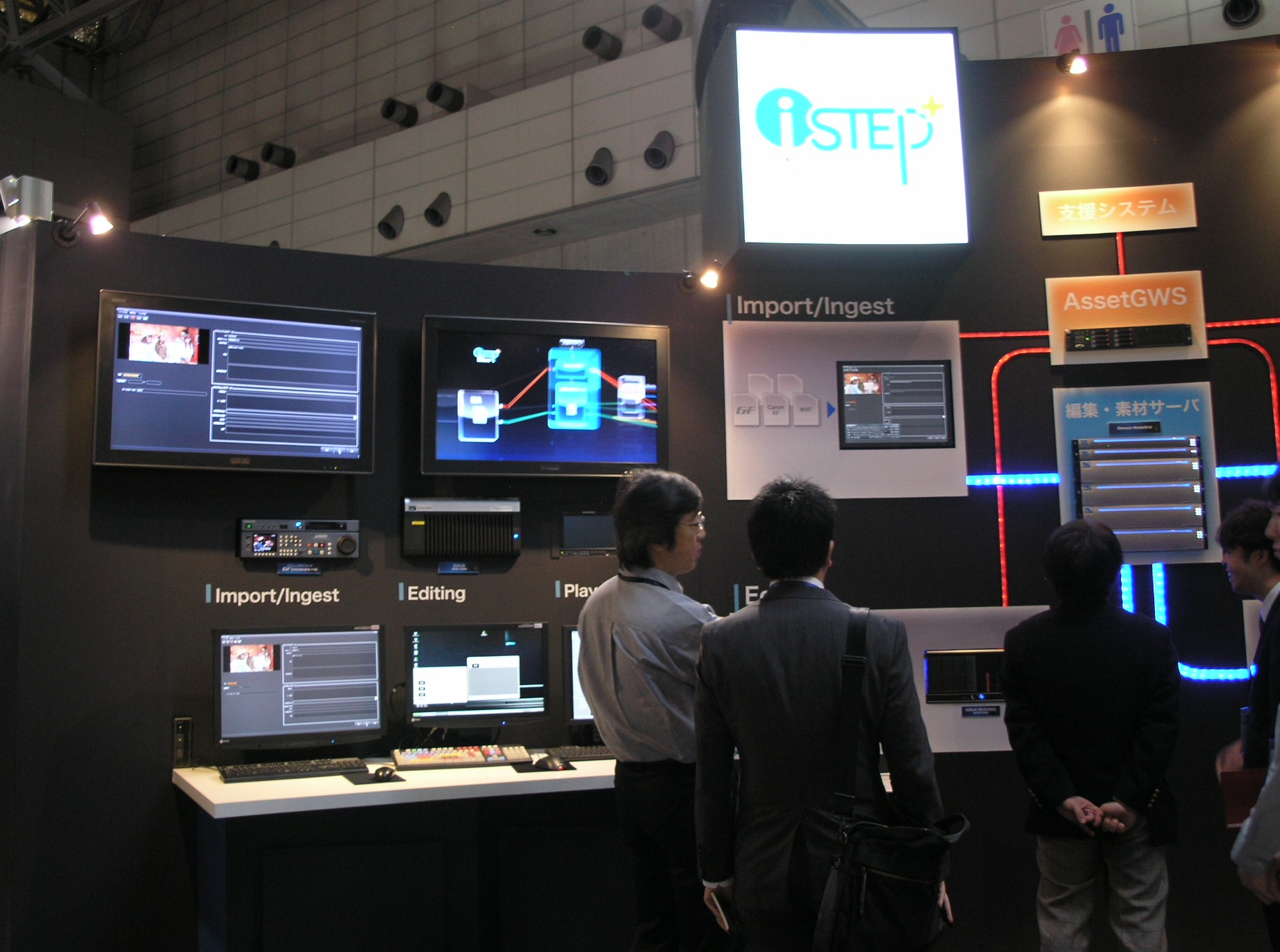 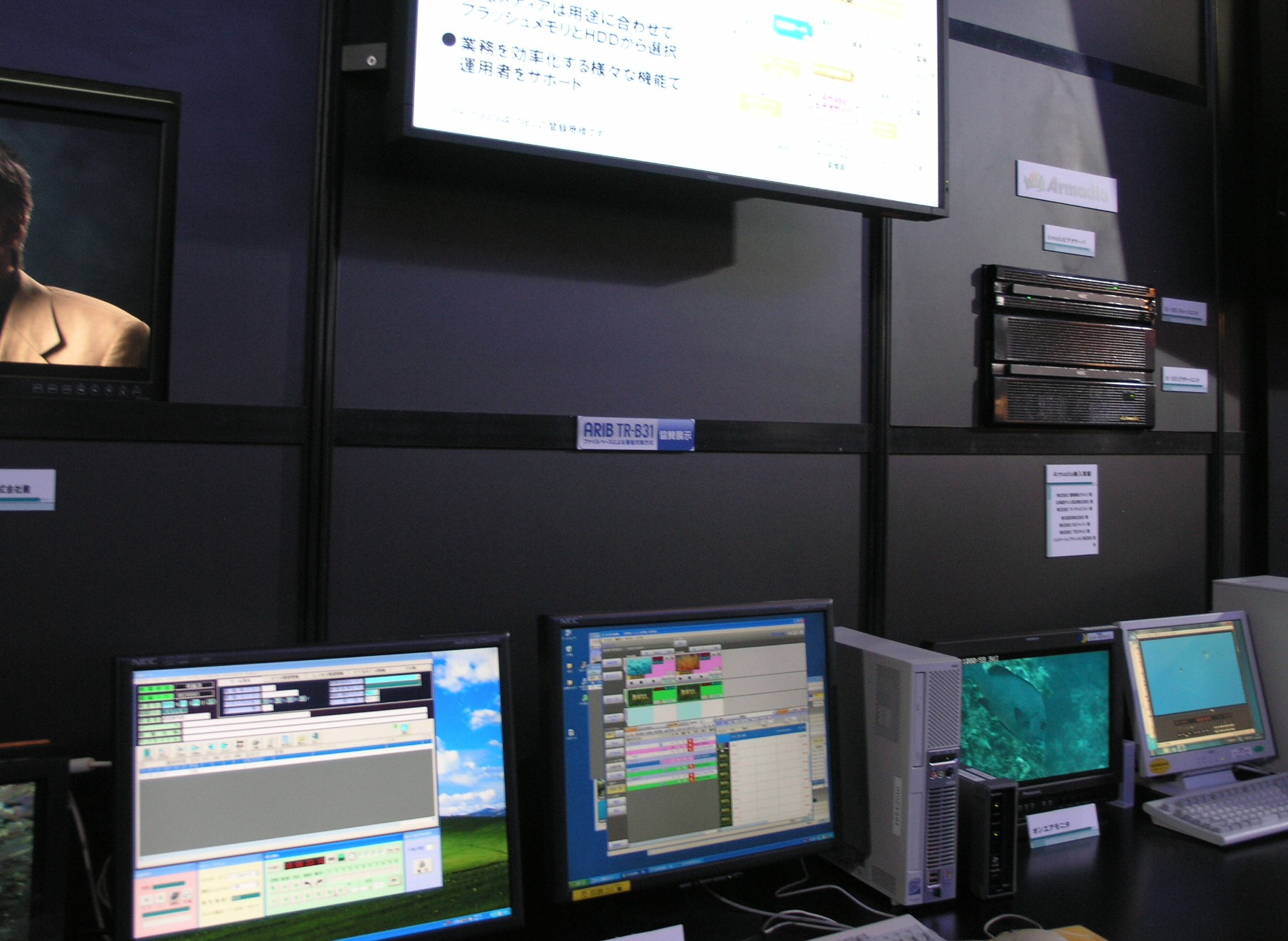 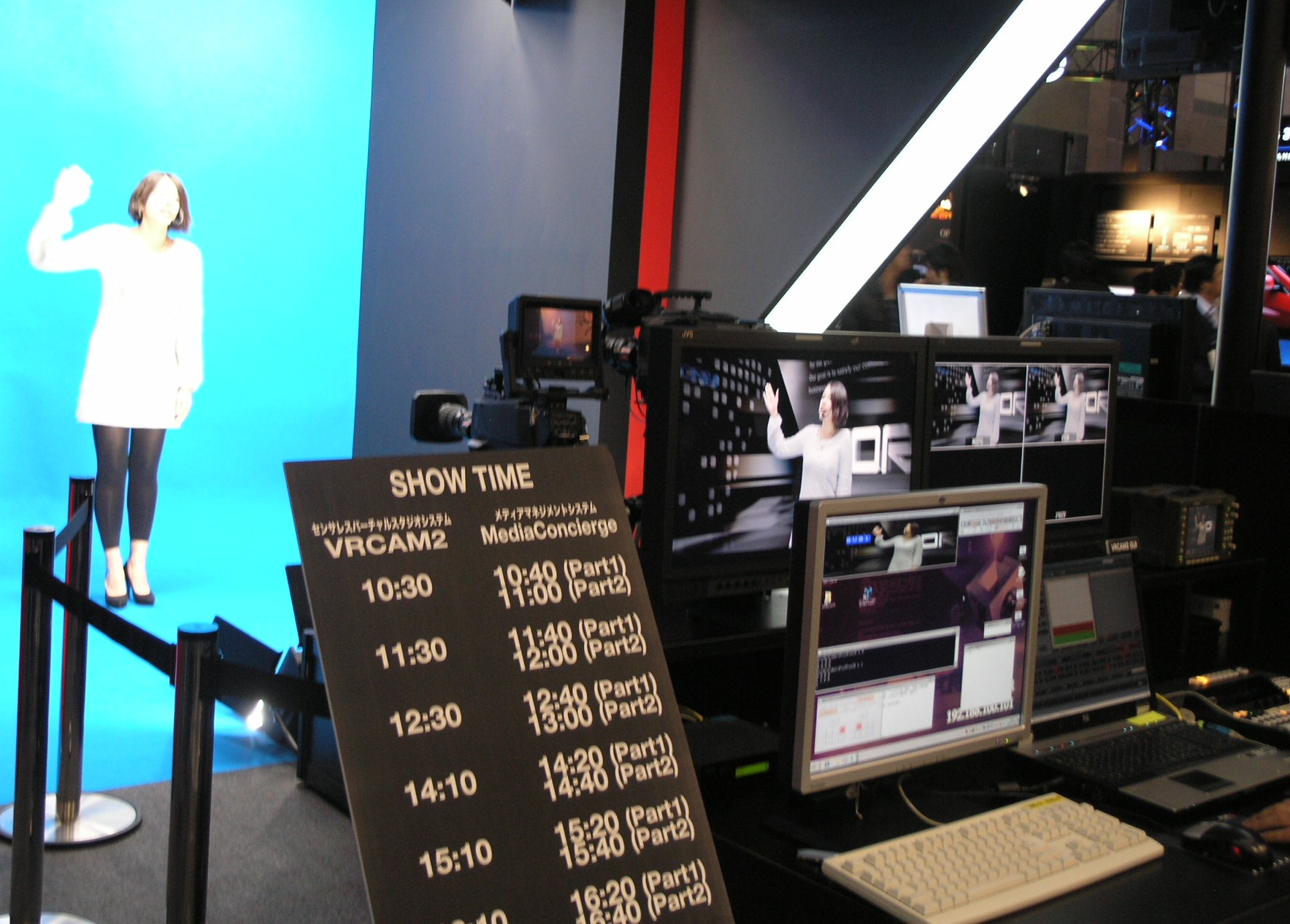 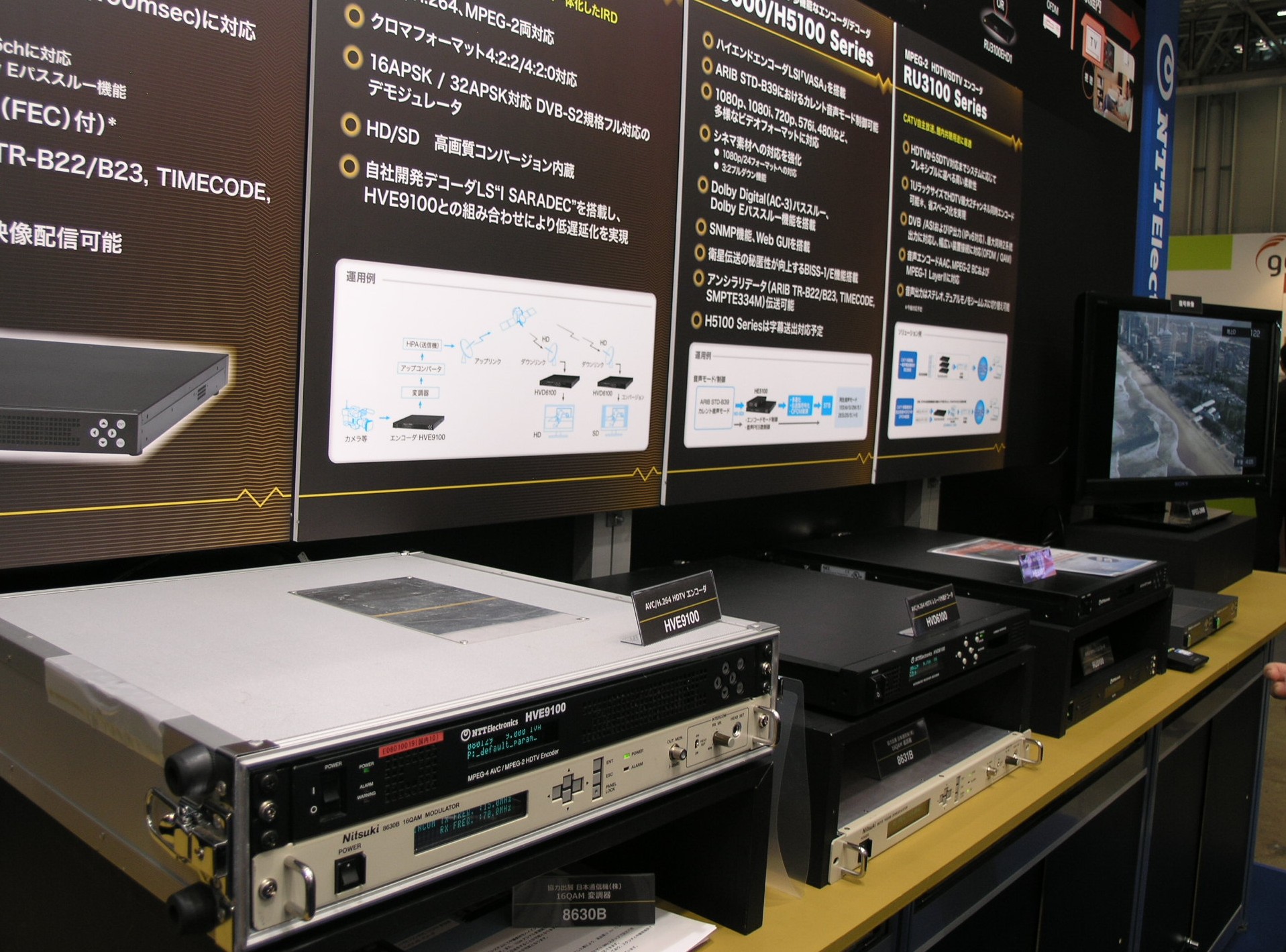 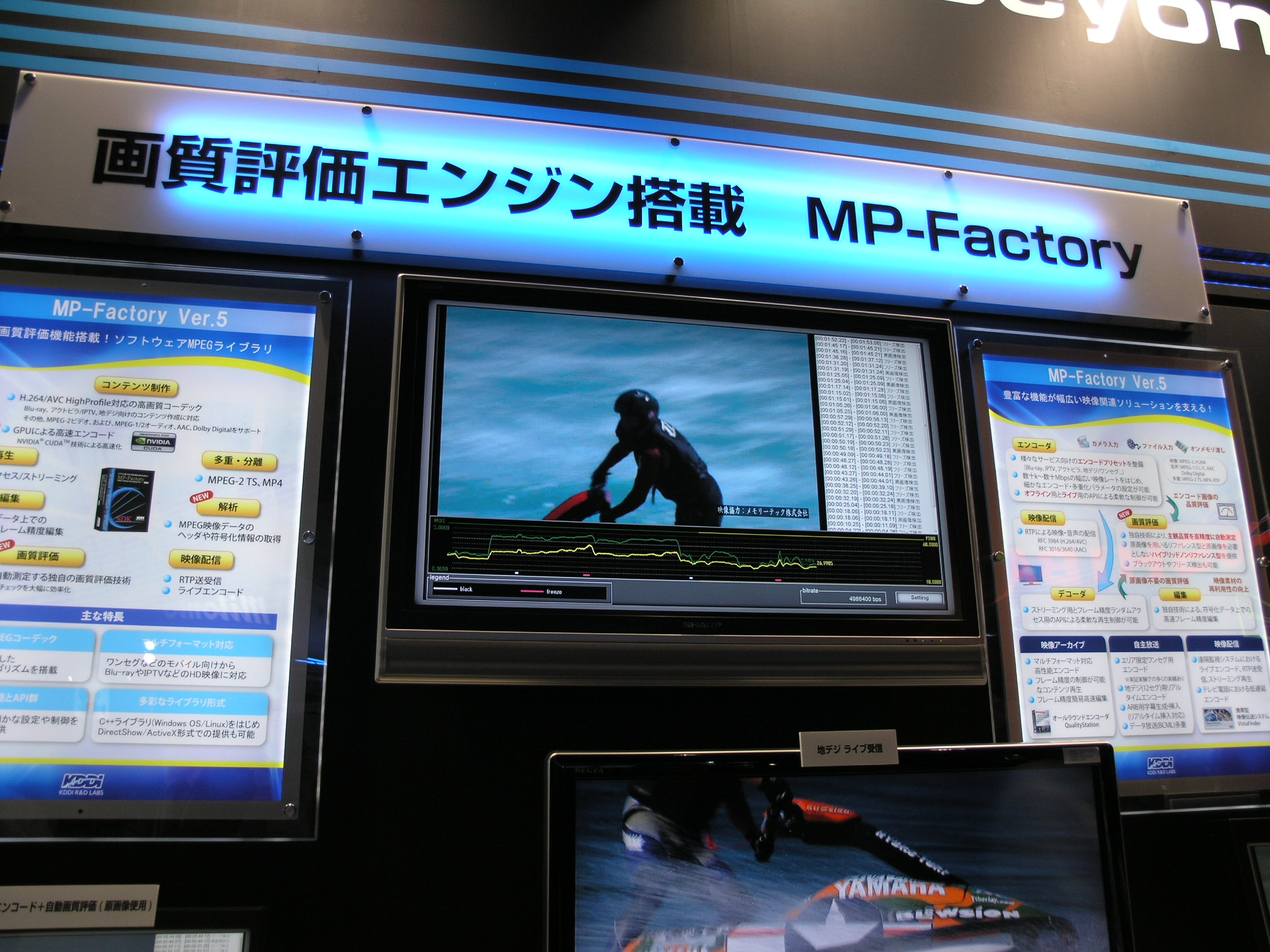 This article takes a look at file-based production systems, encoders and trends in network technologies pioneering the way forward in the digital era. Responding to IP developments, broadcasters and content providers alike are surging ahead with file-based systems that offer more efficient workflows. Managing and processing contents with file-base systems all the way from coverage in the field and production through to broadcasting and archiving enables sharing of materials through networks, which offers better use of manpower and systems since program and content production, and transmission can be performed with greater efficiency. These developments are popularizing production and distribution systems for movies, games, and BD and IP content, and hold the promise of increased opportunities in the content business.

At this year's NAB show, Sony promoted it's workflow total solution "Media Backbone", however this time at Inter BEE, the company exhibited a file-based workflow system specifically focusing on its XDCAM series. The central tool of this system is Sony's new model XDCAM Station, which features 1TB of HDD/SSD internal storage, a dual head Professional Disc drive and SxS memory card slot. The system even has an SDI interface to accommodate tape systems. This hybrid tape and file-based system enables users to work with both types of media and offers even more workflow efficiency in news or program production applications.

Also charging ahead with file-based workflows, Ikegami Tsushinki exhibited their iSTEP+ total solution system. Based on the company's Asset Gateway Server for managing program and material data, and the Editing and Materials Server for recording actual data, the system enables tapeless and network-based input, network-linked non-linear transmission and archiving, and file transmission of all forms of data. This is a highly efficient production and transmission environment that enables all-in-one content data management and operation of video, audio and still image main data and associated metadata. Incorporating alliances with Avid and others, the file-based non-linear editing system consists of the company's GFCAM Tapeless Camera, the GFPACK Memory Pack, and GF STATION Recorder/Player. Ikegami is also proud to have been awarded an Emmy this year for the company's tapeless line up.

Centered on the Videos neo Flash Memory Server, Toshiba presented their "Workflow Innovation" theme linking a diversity of broadcasting and communications. Featuring a high-speed communications platform, the system offers high-speed MFX file transfer between different servers while supporting HD video baseband signaling. The system uses flash memory as its memory media, and is energy-saving and compact. It can be expanded up to 60 TB, and offers the flexibility for configuration as a small or large-scale system.

As an indicator of recent technological trends, the large-capacity LTO tape server from IBM was also on show. One LTO tape can store 1.5 TB of data. These can be configured as small-scale 72 TB, medium-scale 594 TB, or large-scale 30 PB server systems.

The FOR-A exhibit also showed rich lineup of total solution systems offering file-based environments for production, editing and transmission. One of these is the company's media management system called Media Concierge, an all-in-one media file system compatible with both tape media and network-based media for managing all kinds of audio and visual file materials. The company demonstrated their acclaimed Hanabi switcher, and hardware/software from non-linear editing and production subsystems with MXF files, through to transmission systems. And in what seems to be a recent technological trend, they included a large-capacity LTO video server in their lineup. Featuring 4 virtual cameras each capable of a maximum of 32 position settings, the ever-popular VRCAM2 sensor-free virtual studio system is also now compatible with 2 real cameras with sensors in answer to user demands. This compact, cameraman-free, one-man operable system that enables background and character CG video synthesis work with blue screens and so forth attracted a lot of enthusiastic attention from visitors.

Thomson Canopus's flagship video editing software EDIUS-6 now enables real-time compatibility with a variety of formats such as AVC-HD and EOS movies, as well is XDCAM-HD. The company has also revised codecs and software for high-performance processing of 10 bit materials and heavy effects. As well as that the system is also capable of 4K resolution, 50P/60P processing, and even 3D movement, enlargement/shrinking, and rotation, giving a higher level of freedom, expressiveness and productivity. The company also exhibited the K2 series already well used with sports broadcasting and live events, now with boosted functionality thanks to the T2 disc recorder, and offering even greater simplicity for a variety of production styles.

Sakura Eiki was another company exhibiting tapeless environments, and demonstrated their Prunus non-linear editing system. This system enables mixed use of XDCAM-HD, P2-HD, DVCPRO, GF Series tapeless media combined with VTR tape media (HD-SDI input), as well as server-free material sharing across IP networks. Having a high affinity with existing tape systems and VTR like operability, this equipment is used by a number of broadcasters such as NHK and others.

With the recent advances in IT technology, the exhibition also featured many presentations of encoding technologies developed in response to broadcasting and communications convergence, as well as network distribution technologies.

The NTT Group members set up booths alongside each other, and presented a range of multipurpose cutting-edge technology that will most certainly be of great use for video development in the coming IP era. NTT Electronics exhibited a world-first 4:2:2 profile (8bit) real-time H.264 HDTV encoder/decoder series, and demonstrated 1-microsec ultra-low latency transmission of non-compressed HDTV video. NTT AT also exhibited non-compressed HDTV ultra-low latency real-time transmission gateway for the IP Giganet, as well as the actual JPEG2000 real-time coding equipment for 4K live broadcasting uses, a transcoder for converting MPEG2 into H.264, and software codecs for high-resolution/high-compression 3D video.

KDDI R&D Labs exhibited their compact Vista Finder device for transmitting high-quality video data from anywhere in the world. Being highly portable, this equipment enables easy video transfer even from a smartphone, simultaneous reception from multiple positions, distribution of video stored on a broadcast server, and promises wide ranging uses including and beyond News service applications. Compatible with a whole host of video services including digital broadcasting, network video, BD and so forth, the company's MP-Factory is an automated picture quality evaluation system that offers high-efficiency/high-performance evaluation and testing for digital content. Capable of either using or not using original video for testing, KDDI R&D Labs demonstrated this hybrid system while showing actual video. K-WILL has also advanced their automated audiovisual monitoring functions by further developing earlier technologies, and demonstrated their monitoring systems aimed at archiving, transmission and retransmission applications. The monitoring technology prevents damage before it happens by comparing individual pixels during conversion to file data to detect tiny errors, and detects freezing and muting in a number of frames at the transmission stage, thus enabling rectification in a short space of time should a problem occur.