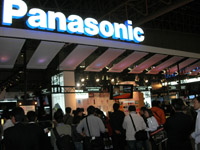 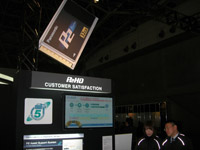 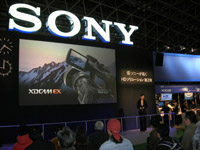 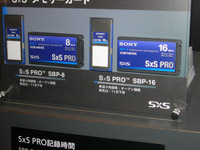 The TV industry has undergone a complete transformation, switching from film to 1-inch and 2-inch open reel tape, then to ¾-inch tape, and ½-inch tape. Now we are approaching complete digitization with DV and DVD. With this evolution, recording media have become more compact, and there has been a quantum leap in work efficiency for such tasks as editing.

Broadcasting studios have long used ½-inch tape for ENG, but with the accelerating speed of change, there has been a dramatic increase in the frequency of location shoots. As a result, even ½-inch tape, which one used to think was compact and handy for carrying around, now seems to be cumbersome when one is on the move. But now we are entering the tapeless age. Now we have HD, things have become really convenient with the shift to such digital media as optical discs, memory cards, and flash memory.

Also, in the age of analog editing when you wanted to go back a few edits to redo something, what you had to do was either go back to that edit point and start again, or temporarily transfer everything to another tape, a makeshift. What this meant was that a huge amount of time was also required for the editing. However, with HD editing you can instantly swap around edit points, freely lengthening or shortening the clip as required. Because of this, it is possible to rapidly reassemble clips so that they will fit whatever timeslot has been allotted. This is a godsend for anyone involved with news and other programs where immediacy is a priority; it is also very handy if you are editing footage of an hour or more in length.

On display at this year's Inter BEE are products, from a number of companies, that continue this evolutionary trend.

Other welcome features include the ability to mount the camera on a build-up unit that offers a "one touch" cable-free setup, and a backlight that is a real help when on location in the pitch dark. Of course, thanks to the 2.2Mpixel 2/3-inch IT-CCD with horizontal single-channel output, internal moiré has been greatly reduced, and there is a significant improvement in the ability of the camera to capture shades of blue. I'd like to add that, with the 38-bit DSP and newly developed 14-bit A/D conversion LSI, it is now much easier when looking at a high-contrast image.

■ High-capacity P2 Memory Card
The P2 memory card used by Panasonic is a recording medium with the potential to replace the ½-inch tape that has become the mainstay of today's tape-based ENG. Weighing 45g, this new recording system, which is the same size as a PC card, uses the SD card expertise developed by Panasonic. It comes in 16GB and 32GB sizes. The 32GB card can record approximately 32 minutes with AVC-Intra 100, and about 128 minutes with DVC-PRO/DV. Over the years the recording tape used by the broadcasting industry has become increasingly compact, but when it comes to going on location even today's ½-inch tape is pretty inconvenient for carrying. So if the recording medium is as compact as this card, mobility will be substantially enhanced. That's not just because it's easy to carry, but because the cameraman can keep a bunch of spare memory cards in his bag. This also means we can reduce the volume of waste when disposing of products, which makes it very eco-friendly. Finally, we have a system that appears to have been truly developed with HD in mind.

The PDW-700 and PDW-740 camcorders are specified as 2.2Mpixel full HD, with Ethernet and i.LINK interfaces equipped as standard. Video/audio data can be saved to the MXF file format and transferred over a network. Also, the slow shutter and cache REC functions that have proved popular on the HD Series are also provided. Among the other handy features are a digital extender that performs well in dark locations, and a slightly larger, 3.5-inch color LCD.

■ PFD50DLA Professional Disc
The PFD50DLA is a high-capacity dual-layer optical disc that comes in 50GB and 23.3GB sizes. During use it remains in a cartridge, measuring about 13cm square. Sony accommodates 3 compression formats – MPEG HD, DVCAM and MPEG MIX – on this recording medium, using the same technology as that of the next-generation DVD. Since there is no physical contact made with an optical disc during either recording or playback, it is ideal for continuous or repeated use. It also offers good compatibility with the XDCAM Series for broadcasting use; editing – both linear and non-linear – is simple. The disc has a 500MB partition set aside for general-purpose data that can be used for storing computer files related to the recording; this facilitates greater efficiency in data management since it means Excel, Word, PDF and other files can all be kept on the same disc. At present, Sony's flagship storage medium is the HDCAM-SR tape, but this is better suited for making commercials and movies, applications that demand high quality. The PFD50DLA system, though, can be thought of as being quite sufficient for ordinary program production.

Among the key features of Toshiba's flash memory are the ability to read and write data at high speed, and the use of nonvolatile semiconductor memory so that data remains intact even when power is removed. Thanks to ECC error correction and wear leveling technologies, reliability and confidence are both improved. And the result of all this is the GFPAK, a flash memory pack measuring 80 x 125 x 18mm, and weighing about 100g. It's about the same size as a mobile phone. It comes in three capacities: 16GB, 32GB, and 64GB. The 64GB model can record for 60 minutes at 100Mbps, or 120 minutes at 50Mbps. With both USB 2.0 and serial ATA interfaces on board, it can be connected to any regular PC.

What this means is that, if your PC is equipped for non-linear editing, you can do some editing whenever you like. But one of the nicest features is the fact that, even when it is now powered, you can see how much memory is left on the LCD panel provided for this purpose. You can always look at a videotape to immediately see how much is left, but it's not so simple with the new recording media. These days this kind of thing must be a simple matter for technical staff, but for those of us still very much involved in the analog side of production, this is a really handy feature when you are working on location.

The flash memory technology inside the GFPAK is also used on a camera.
The "packs recording" feature found on the GFCAM tapeless camera relies on a built-in buffer memory that enables the camera itself to record for 30 seconds. This is quite something, because if you can swap in another GFPAK within 30 seconds, you don't have to pause shooting. There are times during a politician's press conference, a celebrity interview, or sports news coverage when the cameraman will miss a really important comment or a decisive moment because he has to change the tape. But thanks to this new feature, you won't have to worry about that again.

Judging from the offerings of these three companies, with the shift to digital technologies I think the tapeless era is bound to start in the near future. Or perhaps I should say that it will spread around the world within a few years. The added convenience goes without saying, but these days amid calls for environmental awareness, digital media are also far superior to the analog alternatives as regards repeated use and waste reduction. There are many people within the broadcasting industry who are firm believers in analog; however, I think the time has just about come when they will have to seriously reconsider. (TV director)