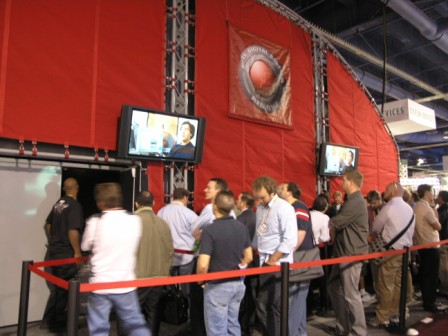 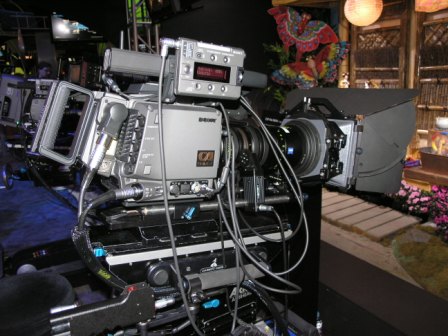 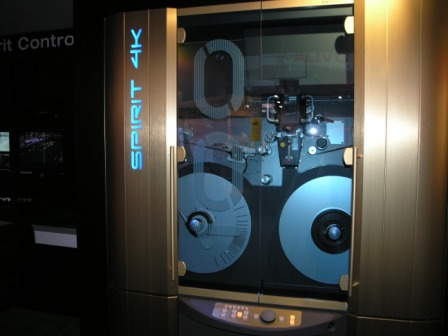 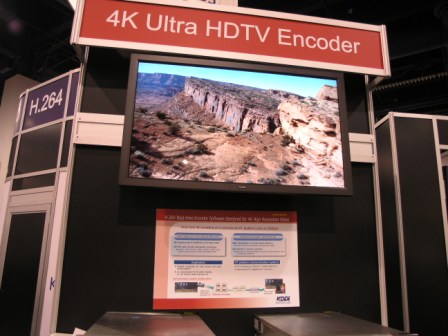 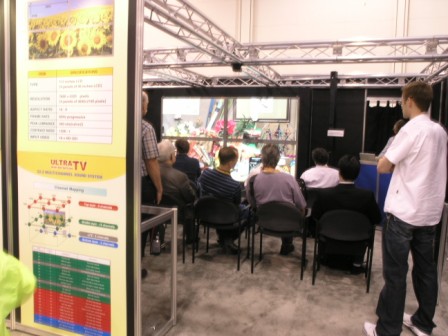 So far, these I have taken a look at cameras, video monitors, production systems and encoding technologies. In this article I would like to discuss the remarkable developments and trends in digital cinema and NHK's research and development of the next-generation U-HDTV (super high vision) for broadcasting

Currently, "digital cinema" is a huge trend with about 5000 theatres in the United States supporting digital cinema, and around 150 digital cinema productions released to date. The "Digital Cinema Summit" is in its 5th year since inception with NAB, the DCI (Digital Cinema Initiative) standards have now been established for about 3 years, and this year's show opened on a grand scale with joint SMPTE sponsorship. The show featured a wealth of digital cinema related equipment and systems from a large number of companies - from displays, production systems and film scanners to compression encoding technologies. I really got the feeling that digital cinema is no longer just a novelty item, but has finally become mainstream business.

Standing out at the exhibition center was the "RED DIGITAL" tent-a company symbolic of digital cinema. The exhibit featured the company's flagship "4K RED ONE" digital cinema camera, the new "RED SCARLET" and "RED EPIC" products, and an array of lenses and accessories. RED ONE uses a Mysterium Sensor (12 mega pixels), and supports 2K, 4K and 1080P/720P with variable speed filming capability from 1 to 60P. This year the company set up a theater at the rear to avoid congestion in the booth, and sure enough there was a long queue of visitors waiting to get in. The theatre featured a large 200-inch screen and a Sony 4K-SXRD projector to show the film. The RED ONE camera was also on display in other booths such as "Redrock Micro" (USA). RED continues to actively pursue alliances all over the world, and have also stated that they will be establishing a consortium in Japan. I look forward to further developments in this area.

Among other things, Sony exhibited their "Beyond HDTV" concept featuring a variety of equipment and solutions in support of digital cinema. Well-received was the new "F35" digital cinema camera with upgraded functions and performance based on the already popular "F23" announced only last year. This user-friendly camera employs a single CCD image sensor (RGB; 1920 x 1080) giving the equivalent quality of super-35mm film, is capable of expressing the same depth-of-field (out-of-focus effect) as a cinema camera, and is complimented by a range of available cinematic lenses and camera accessories. In conjunction with Log camera, wide gradation reproducibility and an 800% wide dynamic range are possible, with RGB4:4:4 and 1-50 fps capabilities. High anticipation of its release this Fall was evident among the video and movie industry participants at the show.
Vision Research (USA) exhibited their ultra high-speed digital cinema camera "Phantom 65". This camera uses a 65mm film size single CMOS with 4096x2440 resolution and maximum 140fps high-speed capability. Also on display was their "Phantom HD" compact single CMOS camera for 2K, 1080p, 720p with 1000fps capability with 1080p. ARRI (USA) presented their ARRIFLEX D21 single CMOS super -35mm 2K digital cinema camera.

Continuing from the previous 2 years, NHK exhibited their latest Ultra HDTV (Super High Vision) technologies. U-HDTV is a next-generation broadcasting format with 16 times the speed of HDTV, and capable of 4 times the data of digital cinema (7680 x 4320) for a truly real-life sense of presence. Until last year NHK presented the format in a theater, but this year, to appeal to domestic oriented broadcasting uses, they set up 4 56-inch 4K LCD monitors in a lit-room situation to create an actual 110-inch display. In conjunction with the surround sound system, this produced a remarkably life-like super high vision viewing experience. Also presented were U-HDTV camera, H.264 compression and 4K, 56-inch monitor technologies.
This year's NAB show also features a host of 3-D related exhibits. NHK exhibited a household television for the next-generation 3-D broadcasts. This device uses NHK Media Technology's (formerly NHK technical service) micropole system with a thin-film polarizing filter on the LCD television screen, and a progressive scanning video signal to alternate the display between the left and right eye images, which are viewed through simple polarized glasses. On the display were 3-D images of Las Vegas city and the exhibit attracted a crowd of visitors following on a good reputation. Other exhibits included wonderful images taken with the compact HDTV camera mounted on the "Kaguya" lunar probe, the high-sensitivity HARP and ultra high-speed HD cameras.