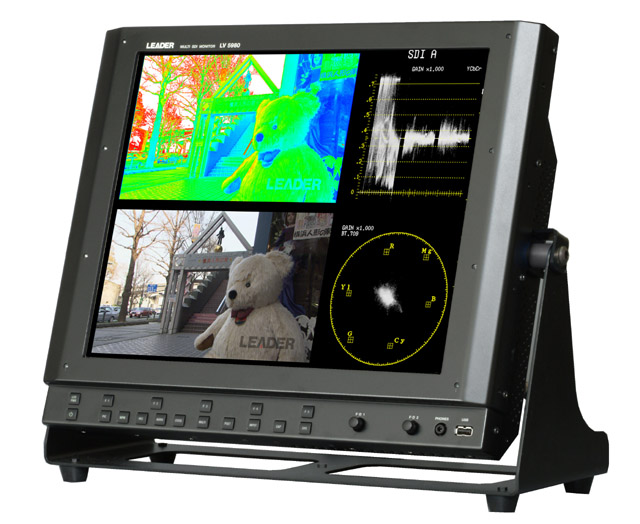 Leader will be exhibiting and demonstrating the LV 58SER40A plug-in unit, which works with devices like the LV5800 multimonitor and LV7800 multi rasterizer, adding functionality for displaying a long-term loudness graph sourced from a loudness meter. In addition to the loudness graph display, other features include the 5.1ch sound display and a lip-synch calculator that measures the gap between audio and video signals. The company says this unit is ideal for situations like monitoring voice level in between television programs over long periods of time.


■ Also on display: a signal generator geared towards the ISDB-Tmm mobile phone multimedia broadcast format
Leader has refined its LG 38SER06 signal-generating add-in software intended for use with the ISDB-Tmm cellular multimedia broadcast format, slated to begin use in April 2012. This software is intended for use with the LG3810 multi-format digital broadcast RF signal generator: the add-in tool effortlessly adds ISDB-Tmm modulation functionality to that device. Its functions target the VHF-H spectrum set down in the multimedia broadcast transmission laws and allow for setting channels by segment, including 13 segment output, 1 segment output, as well as 13 segment + 1 segment RF signal output.

The LV 5980 uses a 17'' TFT color LCD display and allows the user to monitor waveforms with up to four simultaneous SDI signals. It is specially designed for tweaking camera output levels in setups with multiple cameras, allowing for waveform display of video signals, vector display and picture display, enabling the user to overlay multiple signal displays for fine-tuned study. Also included are the 3D ASSIST function, designed for use with 3D images and CINEZONE, a patented tool that lets the user check brightness levels at a glance.