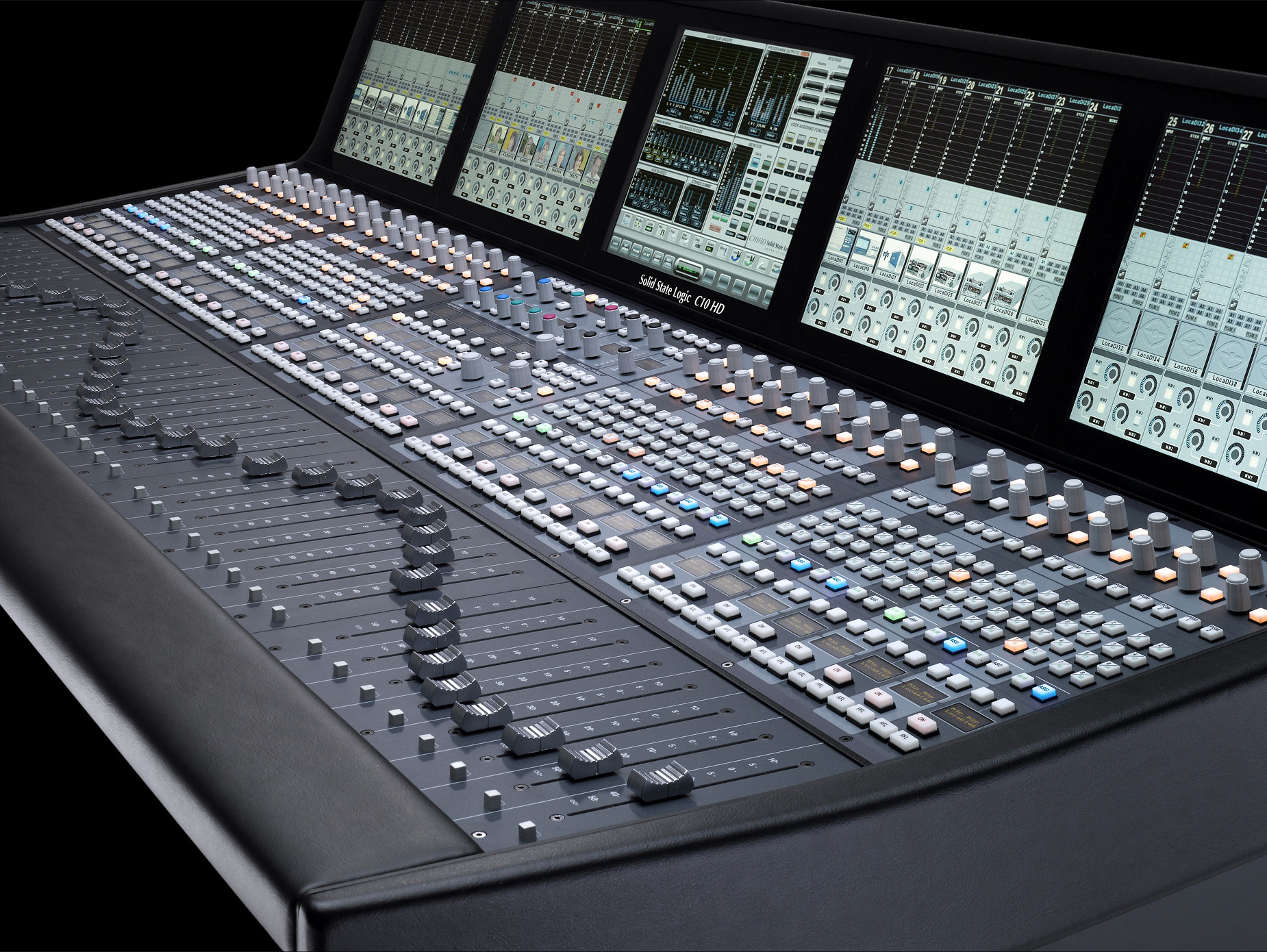 Solid State Logic Japan (Shibuya-ku, Tokyo; President and CEO: Takeo Asano) will display their newest products including their full digital broadcast mixing console and digital inline console. Smyth Research will also display their audio processor "SVS (Headphone Surround Monitoring)" and guests will be able to experience it firsthand. The main products to be displayed are outlined below.

The "C100 HDS V4" is the newest full digital broadcast mixing console improving on the "C100 HDS" that has been globally successful in broadcast related facilities. With a more compact control surface, this console makes it possible to create specifications that meet clients' requirements.

The Blackrock processor, with its high-efficiency CPU/DSP card, is capable of mixing a source of up to 512ch. The interface, based on the newly developed "Blacklight" technology, is capable of handling audio signals four times that of MADI single connections through an LC optical connection similar to those used in the past. It is also compatible with duplexing.

In addition to a newly added function for controlling DAW through ipMIDI, user support functions, such as a dialog automix function and a 5.1 upmix function, have been added, allowing for true and simple 5.1 surround sound.

The "C10 HD V3" is the newest full digital broadcast mixing console developed based on the "C100 HD console" being used globally in broadcast stations. With a more compact surface, and built-in CPU/DSP and power supply, this unit combines reliability with high operability and innovative functions. Its high cost performance is also a big characteristic.

Aside from the addition of user support functions such as dialog automix and 5.1 upmix, it also has ipMIDI-based DAW control capability. Furthermore, operability has been increased with the addition of the "C-Play" function for outputting audio files stored on the console via a button, fader, etc.

Despite its comparatively compact size, the variety of functions implemented make it compatible with a wide range of needs, from use in small/medium studios and broadcast vans to large production studios.


■ "C200 HD", implementing a variety of functions for broadcast and post-production

The "C200 HD" is a versatile digital inline console employing an analog console style surface. Like the "C100 HDS", its number of inputs and outputs allow the creation of large scale systems such as those required in a studio, and the proprietary Centuri processor achieves reliable, high performance. Each channel features control pots and switches such as Dyn, Filter+EQ, and Aux, allowing it to be operated intuitively.


■ "MORSE", a routing system capable of comprehensive control of a production environment

The "MORSE (Modular Resource Sharing Engine)" is a routing system perfect for environments with a need for comprehensive handling and sharing of large number of audio inputs and outputs, such as broadcast stations with multiple studios. Its features include high reliability, scalability, and cost performance.

This unit was created using fully duplex capable hardware and proprietary software featuring high redundancy, taking into account its use in on-air environments that demand high reliability. High operability is achieved through modular stage box audio input/output units, and its core router unit construction. For example, this unit makes it possible to use the same material simultaneously in multiple locations by quickly switching between multiple studios that cut across different floors. Along with the setting of user restrictions to avoid interference and accidents, this unit makes it possible to comprehensively control the production environment.

The "AWS924/948" is an analog production console that improves on the "AWS900+SE", a unit highly regarded globally by artists, engineers, and producers. The 24 channel frame includes the "AWS924" for 24ch inputs and the "AWS948" for 48ch inputs.

In addition to SuperAnalogue audio quality and conventional 5.1 monitoring functions, this unit includes as standard an A-FADA function for replicating DAW automation data in analog faders, and a function for controlling two DAWs over ipMIDI. In addition, the "AWS948" meets a variety of production needs with its ability to fully switch dual signal path modules over operation modes such as inline tracking mode, inline mix mode, and stereo mix mode.

In addition, many other related models will also be displayed, such as the DAW controller "Nucleus", compact analog mixers "X-Desk" and "X-Panda", and the XLogic analog outboard.

With the planned display of Smyth Research's audio processor "SVS (Headphone Surround Monitoring)", guests will be able to experience its operability and other features firsthand.