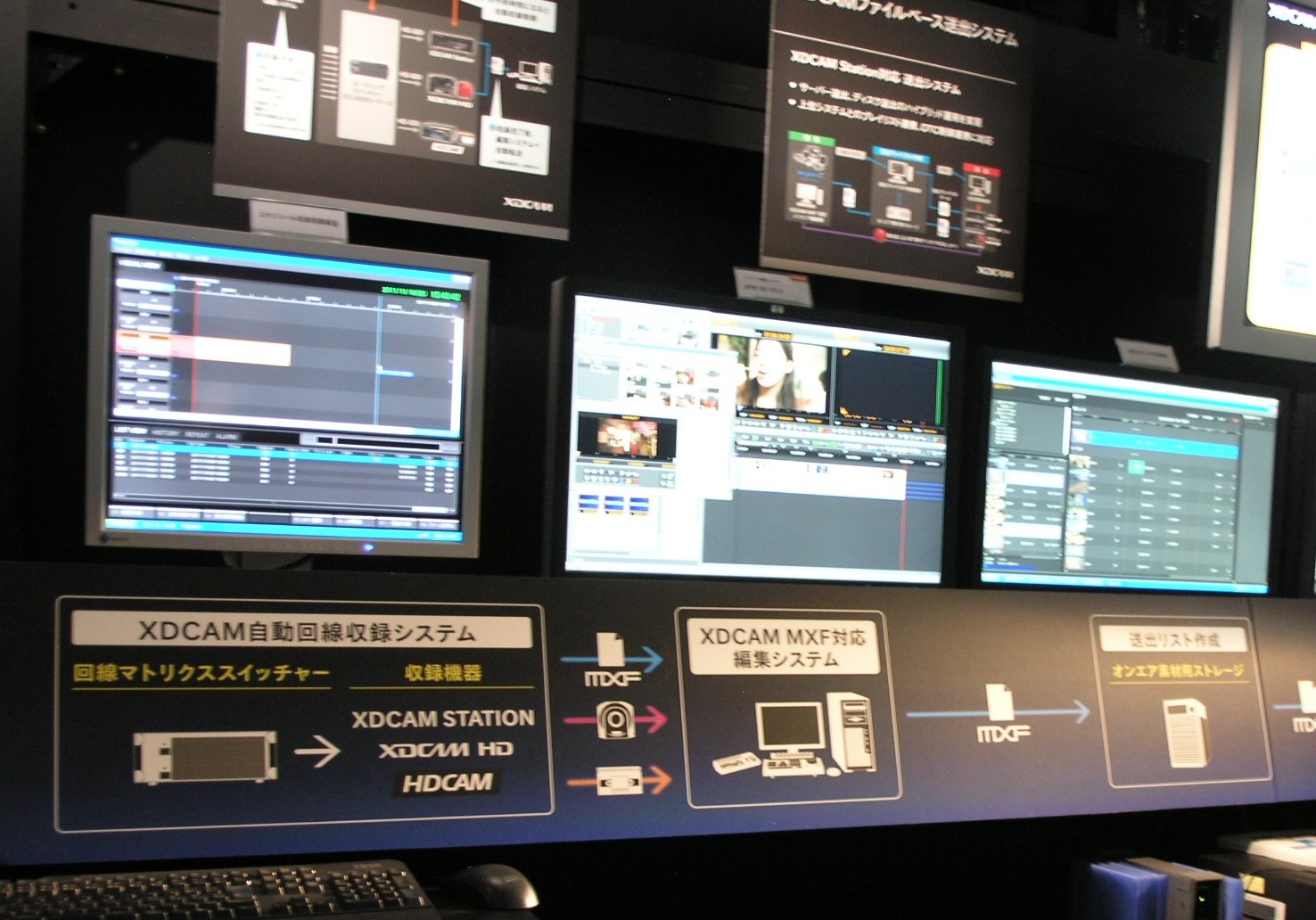 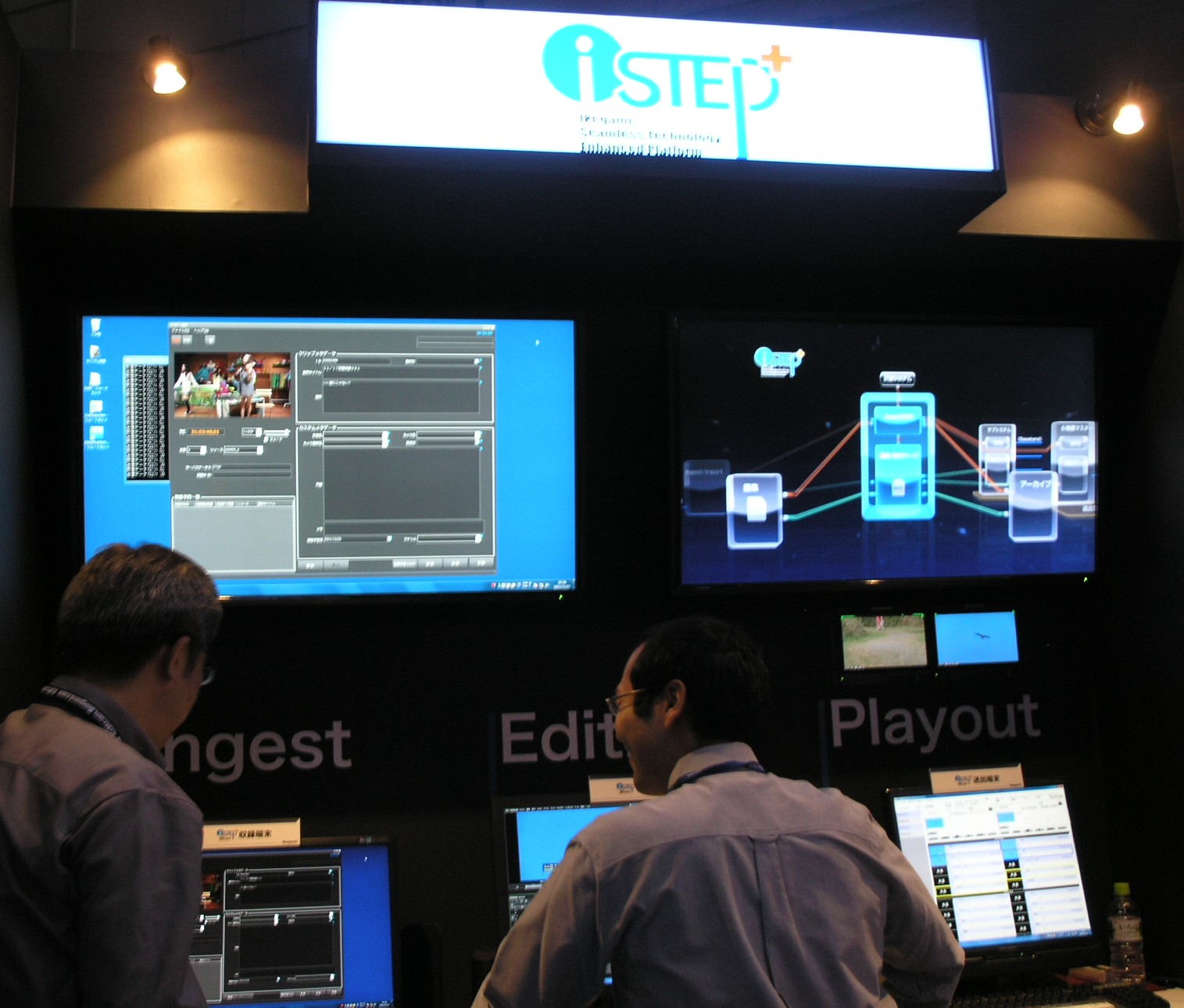 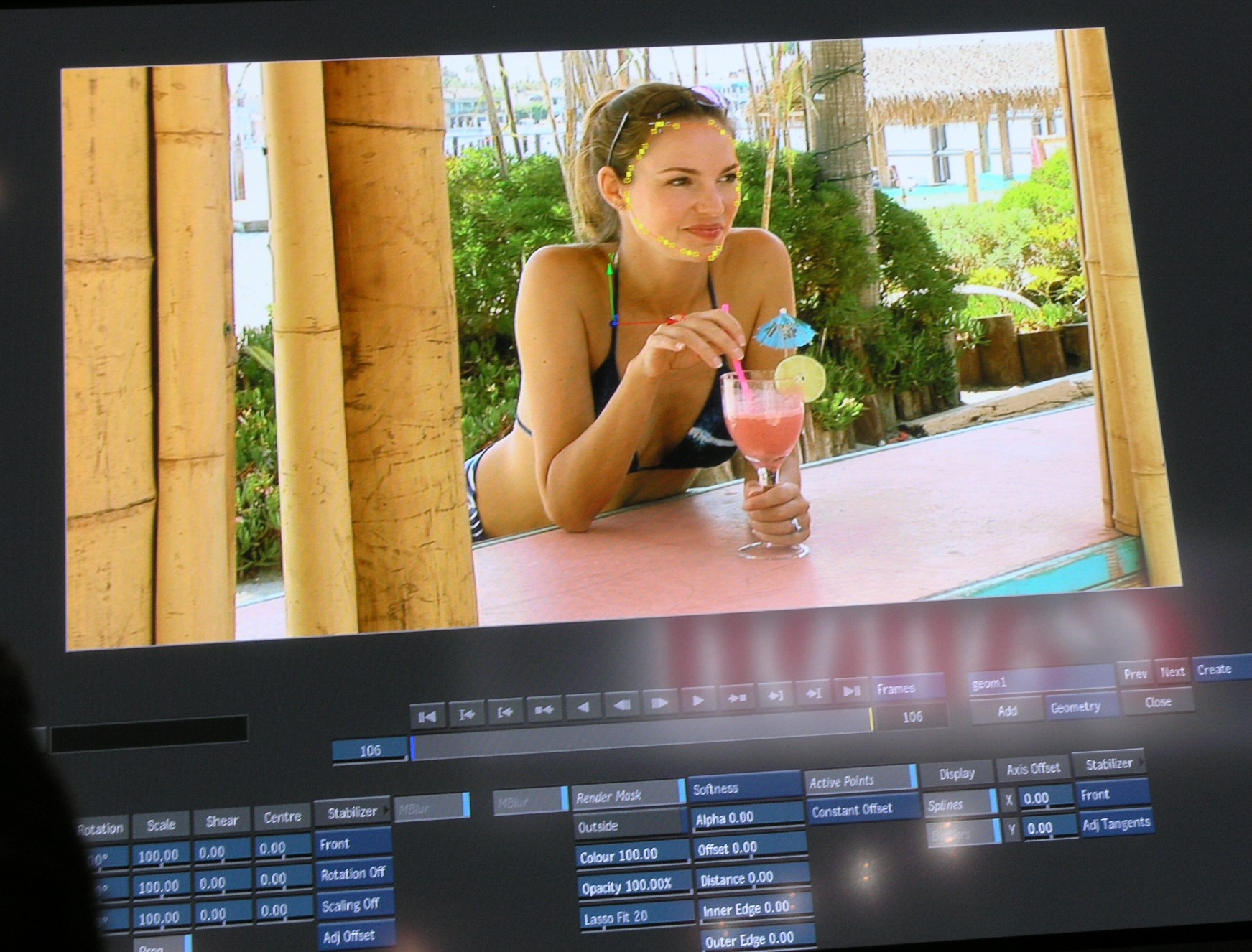 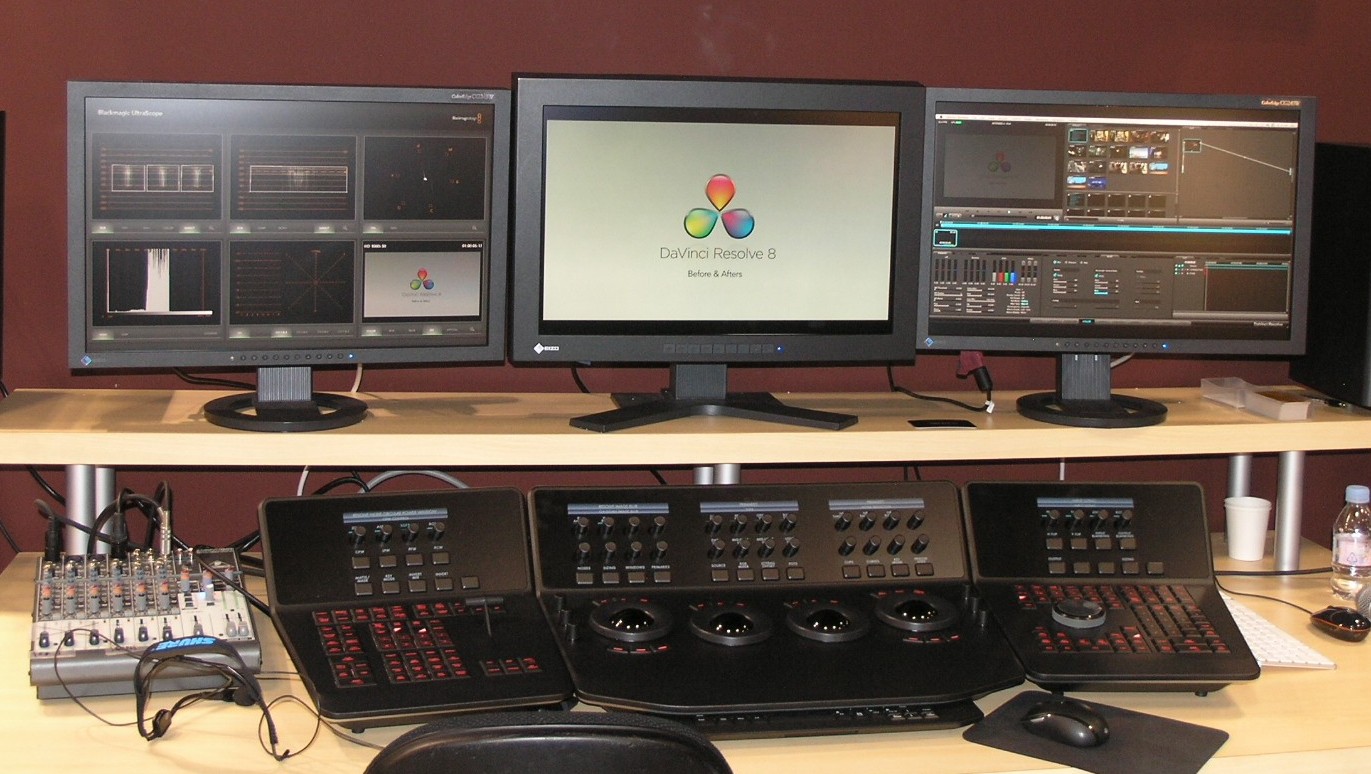 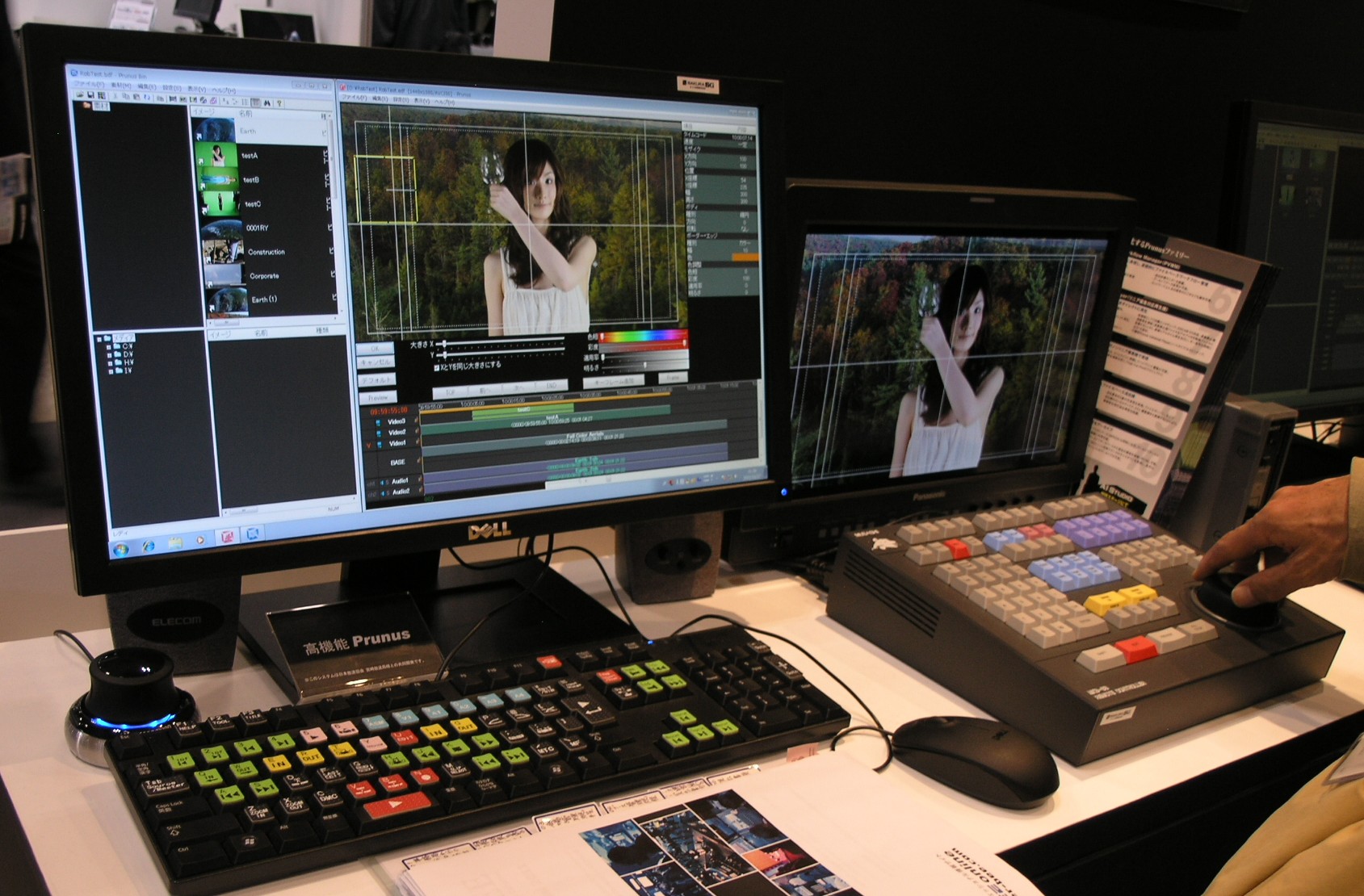 In Part 2, I talked about how camera technology has started to spread and branch out in multiple directions. In this installment, we'll take a look at how file-based workflow systems are being adopted by TV networks and production studios. These systems use a file-based structure for managing and editing data and route it through a server for network sharing and broadcasting; they allow for tapeless camera filming, nonlinear post-production editing, server-side broadcast and archiving, as well as contents and metadata management. The recording and storage media used in the systems have expanded broadly, growing to cover HDD, optical discs, onboard memory, and LTO (Linear Tape Open) formats.

Sony unveiled two file-based workflow solutions. The first was a new model built around the XDCAM Station and supporting previous-generation optical discs as well as next-gen high-capacity discs (3-layer 100GB and 4-layer 128GB formats). The system uses a file-based workflow to enable functionality from filming and nonlinear editing all the way to broadcasting and archiving stages. The disc library system features improvements in high speed and high-capacity storage, thanks to the move to four-layer, dual channel head media; the system also seamlessly links up with tape-based systems and works with SxS memory and SDI interfaces, making production and news studios' workflow more efficient. Also unveiled was a high-quality workflow system using the newly-developed SRMaster, based on the high-speed, high-capacity SRMemory spec. The workflow system is compatible with 4K, 2K, 3D, and other multichannel formats.

Panasonic advocated its new AVC Ultra image encoding format (details to follow in the next installment) and displayed a production system to go with it. In addition to displaying its existing P2HD workflow, Panasonic also gave a live demonstration of a 3D content creation system slated for use at the London Olympics. As described in the last installment, the system consists of a portable deck with real-time 3D recording/playback and onboard P2 card, a 3D live switcher, and a 3DLCD monitor, among other components. In addition, the company exhibited an archiving system built around high-speed, high-capacity LTO media and intended for television networks' archival storage of large programs, as well as a video ingestor which reads in contents.

Ikegami Tsushinki Co., Ltd. built on its established success with file-based workflow systems and unveiled its latest incarnation, the iSTEP+. Built around an
"editing/contents" server that records audio and video data and an "asset gateway server" that manages program files and data, the system enables a seamless file-based workflow across a network. Popular formats like GFCAM, XDCAM, and P2HD can be imported natively or ingested into the system through VTR tape or a baseband signal, then edited in nonlinear post-production with editing tools from Avid, EDIUS, Prunus, or other familiar setups, and finally broadcast or archived across the data server. This system is intended to enable news broadcasts and other programs to respond more quickly and efficiently to emerging data.

Toshiba displayed its VIDEOS neo setup, composed of a memory server device, program server, and archival system. The system is a high-reliability memory server based on 64 GB flash memory in a low-energy, high-capacity, and small form factor spec. NEC presented a file-based workflow system intended for news broadcasters prioritizing a timely response. The system uses the next-generation iStorage HS grid storage for its data server and the established Armadia for its transfer server. Hitachi Kokusai Electric also responded to the new tapeless, file-based era with its PROGRADE server (onboard HDD for recording and SSD for playout), covering all workflow steps from recording to sending. Hitachi Maxell also displayed its iVDR-EX cartridge, a small-format portable HDD developed in conjunction with NHK.

For-A exhibited a creative and multifunction file-based production system appropriate to today's digital age. Its centerpiece, the "Media Concierge" system, offers a complete media management system covering ingestion of video, audio, still images, and other media, all the way through editing, management, output, and archiving. The system has been upgraded with more functions over last year's version, allowing for easier handling of metadata and linkage with other broadcast tools. The company also exhibited a large-capacity archival recorder using the latest cutting-edge LTO-5 storage format.

In addition, the world-famous Autodesk presented the Mac version of its Smoke finishing tool. The GPU displays an intuitive timeline display and is easy to navigate, enabling high-level and efficient creative work. The software supports a range of formats widely used today and is suitable for movie production as well as high-quality commercial and television program work.

Avid presented a number of solutions intended to aid users of tapeless production systems at broadcast networks and post-production houses around the globe. They gave a live demonstration on the main stage of their latest workflow tools for television and news broadcasters. The demonstration touched on all elements of their system, built around the ISIS5000 and Avid Interplay: Media Composer, the ingestion and editing component, Interplay Transfer, the output module, and Interplay Archive, the archival component.

Blackmagic, whose systems are used globally in film, commercial, and high-quality TV production, presented an expanded version of its DaVinci Resolve, a color correction system. The new system boasts upgraded functionality and features in response to today's digital climate.

IMAGICA DIGIX presented its unique production system and tools. The Vizrt LIBERO Highlight is intended to enhance live sports broadcasts with clear and appealing visual graphics. The tool allows for highlighting effects based on player and ball tracking, speed display functions, as well as display and analysis of the offsides lines. In addition, Viz Reporter is a system allowing direct on-air broadcast of images sourced from a smartphone, increasing broadcasters' mobility on-site. The Nucoda Film Master color gradation system, compatible with 4K and 3D images, expands color gradation functionality by enabling not only LR color correction, but correction on a per-camera basis and pan, tilt, and rotation functions for stereo images. Further, the DVO Clarity tool removes and fixes grain (noise) from digital and film images, as well as allowing the user to clean dirt and damage to film stock.

Sakura Eiki's Prunus nonlinear editing series was also on display. Compatible with XDCAM, P2HD, GF, and HD-SDI, as well as working with tape-based systems, the setup is widely in use at NHK and other broadcasters.