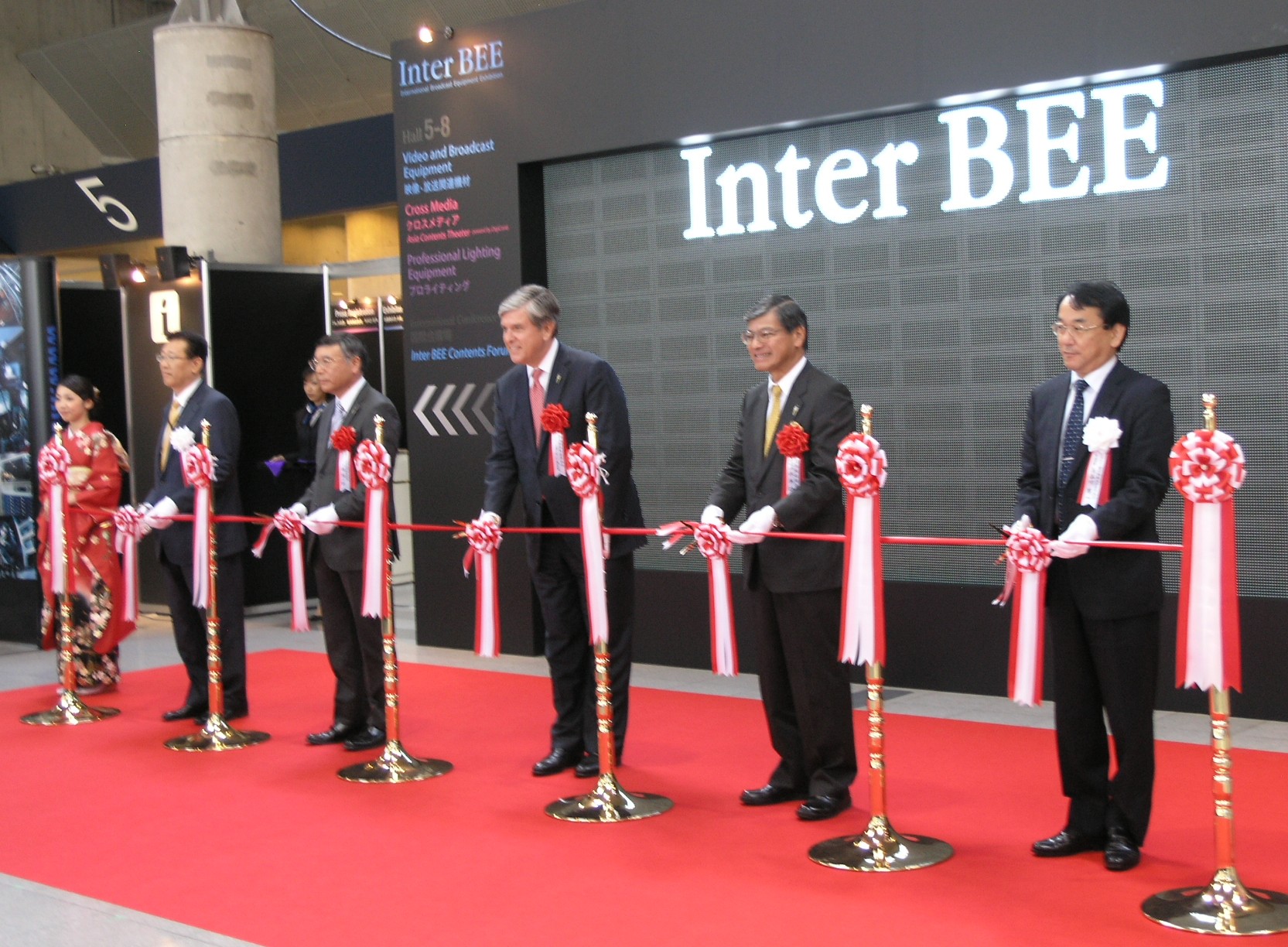 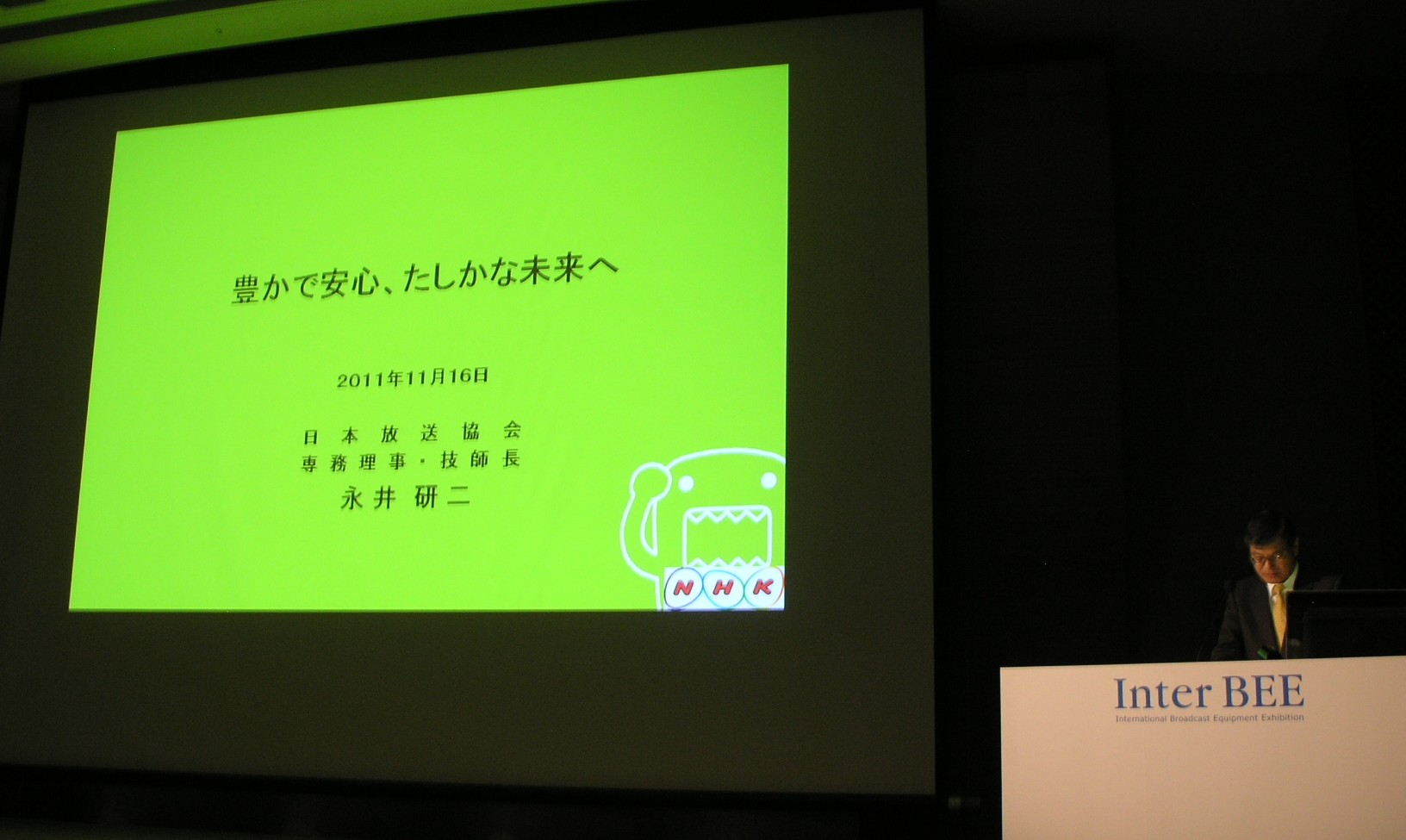 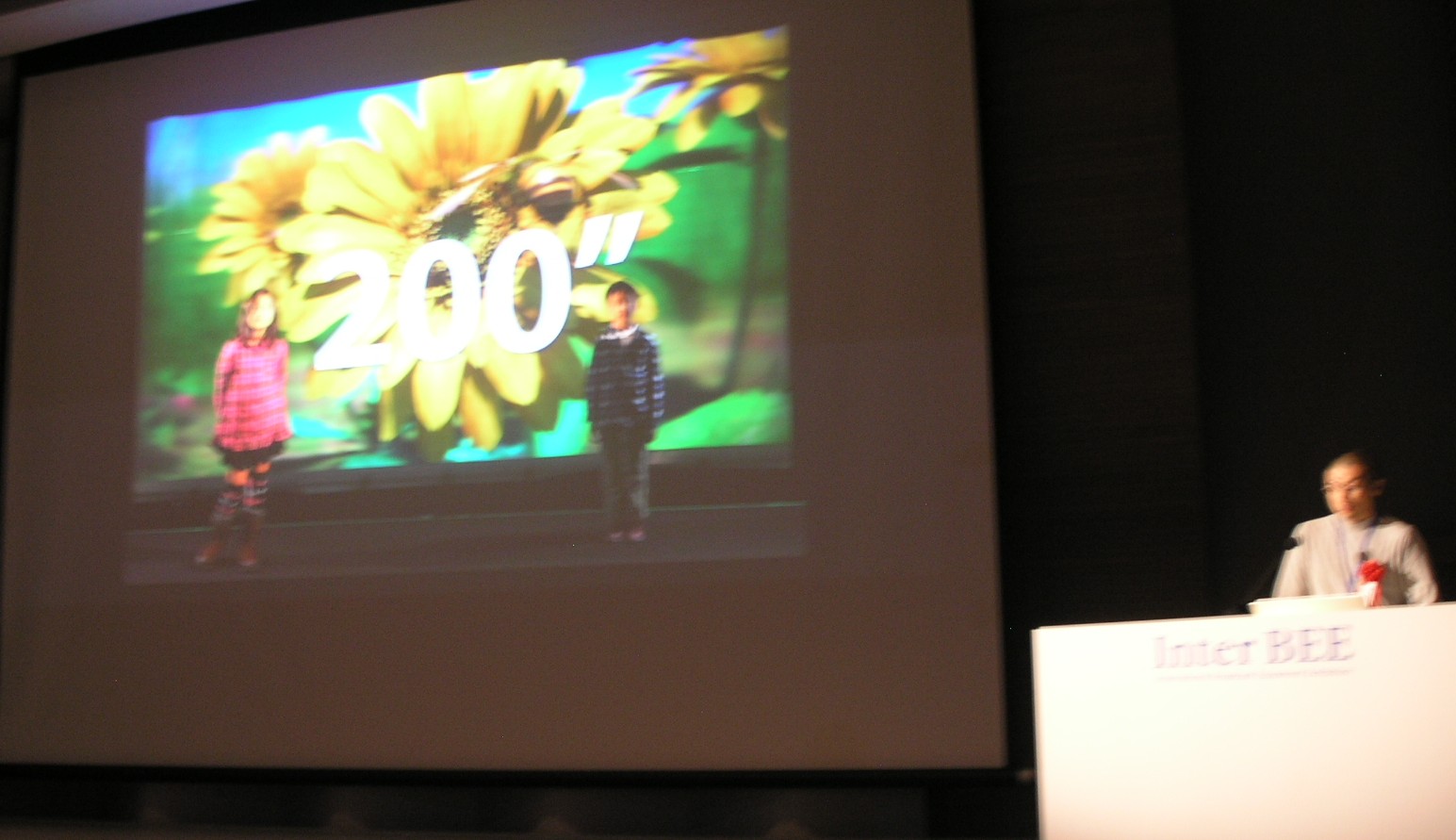 Scene from a video symposium lecture. 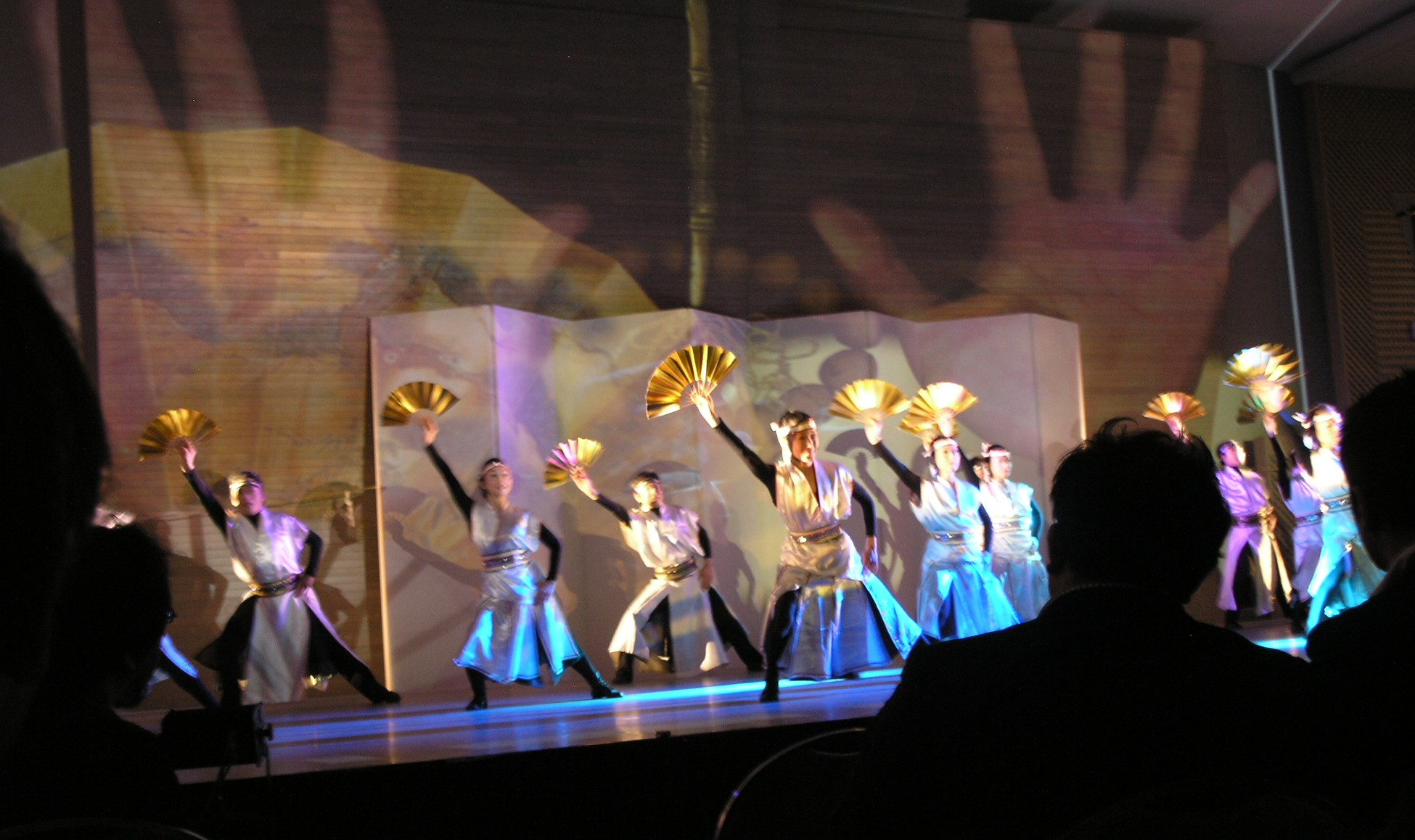 Creating 'bonds' through a real live, overflowing with realism 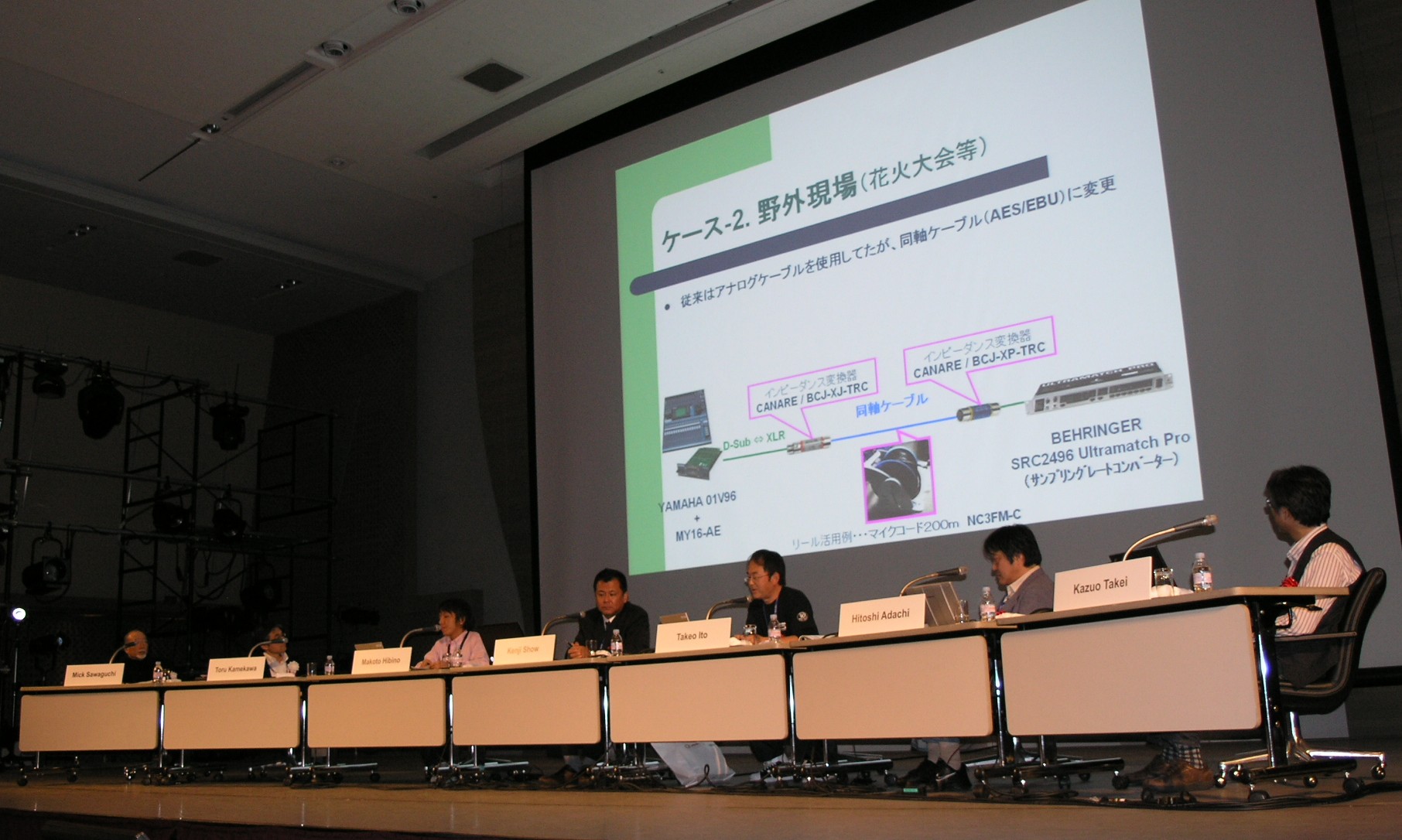 Panel discussion at the acoustic symposium.

Inter BEE 2011, one of four major conventions related to world broadcasting (the others being NAB, IBC, and BIRTV) was held this year at Makuhari Messe. The convention anticipated the dramatic social, economic, and industrial changes expected to come about in the aftermath of March's Great East Japan Earthquake and ensuing nuclear accident, electricity shortages and renewable energy projects, as well as those caused by the worldwide recession and strong yen. The July switch to digital broadcasting also represented the greatest change in broadcasting history. This year, Inter BEE was held amid these pivotal social and broadcasting/media changes. Because of this, perhaps, the convention's concept and theme, as well as its exhibited items, technology trends, and presentation methods differed markedly previous years. This convention, the 47th so far, billed itself as a "response to the great changes in media in the new digital age." The exhibit booths were manned by 800 people, while the 30,000-plus visitors totaled slightly less than last year's all-time record. Still, the packed lecture and exhibit halls succeeded in making everyone sense the epochal change in the air. In this issue, I will summarize the regular events and conference sessions. Future issues will cover exhibited products and technology trends.

On the first morning, opening ceremonies took place in the entrance hall of the international exhibition hall. Remarks were delivered by JEITA and other sponsors, NAB visitors, and supporters NHK and commercial broadcasters. The event committee chair proclaimed the event opening. A ribbon was cut to kick off what should be remembered as the first Inter BEE since the switch to digital broadcasting. Beginning at 11 AM, NAB President Gordon Smith and NHK Chief Engineer Kenji Nagai both delivered keynote speeches in the international convention hall.

Mr. Smith, a former US Senator with deep cultural ties to Japan, became NAB president in 2009. In his talk, he praised NHK for its achievements and progress in world broadcasting, and in particular, for its demonstration of HDTV at an NAB meeting in the 1990s. Even recently, NHK and NICT have publicly demonstrated technologies such as U-HDTV and 3D at NAB, exciting attendees with the experience. As the digital transition provides a business turning point to broadcasters facing ever harsher business conditions, he said that moving forward, he wants to collaborate and cooperate with Japan's broadcasters. He expressed gratitude to the many companies that exhibited at this year's NAB and the many guests who attended despite the earthquake. Throughout the terrible disaster, notwithstanding the damage suffered by many broadcasters, they delivered fast and accurate information that saved countless lives, something for which Mr. Smith said he had the highest respect. He closed his remarks by expressing hopes that the successful completion of the digital transition will enable further strengthening of US-Japan ties, leading to the creation of new platforms based on the new technologies.

NHK Chief Engineer Nagai described NHK's response during the Great East Japan Earthquake, and how disaster victims sought information through the media. While showing earthquake video footage, he spoke about how, despite damage to the antenna atop Tokyo Tower and to Sendai broadcasting station equipment, accurate information was still rapidly broadcast. The audience felt the intensity and immediacy of those moments and grasped the challenges that NHK faced when making on-site broadcasts. Mr. Nagai spoke of current contingency planning efforts such as setting up Osaka backup operations, against the possibility of a future massive Tokyo earthquake. He also described plans for "hybrid-casts" in two years, test broadcasts of super-high vision (SHV) in ten years, and glasses-free 3D broadcasts in 20 years. As for upcoming plans, he announced that Japan, England, and the US will have simultaneous SHV public viewings at the 2012 London Olympics. It reminded me of the HD street TVs of the 1988 Seoul Olympics and how much HD has grown since then. I'm eagerly anticipating SHV future developments.

Next, the popular, regular content forum and the video symposium were held on the 2nd day, and the acoustic symposium on the 3rd day. Admission is being charged starting this year, but even so, crowds packed each venue.

The video symposium featured experts presenting and discussing technologies and production techniques at the cutting edge of video expression. The experts covered new forms of video and lighting collaboration that can be used to produce very real effects. In the digital age, this applies not only to broadcasting and film, but also to performing arts and live theater. For example, Mr. Iwasawa of NICT spoke while presenting video about recent 3D trends and the underlying technology that provides a near-real viewing experience. Then he described glasses-free 3D from which a viewer can get an even more completely natural visual experience. He explained R&D status and results and future prospects. Audience interest was palpable.

The expert presentations were followed by a live show entitled "Creative bonds through real life bursting with realism." After a moment of prayer for recovery from the Great East Japan Earthquake, dancers performed a fast-moving combination of Japanese and jazz dance elements choreographed by Mr. Miyazaki, Chairman of the Jazz Dance Art Association of Japan. Colorful lighting, including the newest LED technology, pulsated above the audience, with videos projected from the ceiling onto the walls. The performance mixed dance, fast tempo jazz accompanied by shamisen and drums, lights, and moving images - an intense combination that left attendees intoxicated.

The theme of the audio symposium was "Live Sound's digital architecture - its application and practicality." A moderator and a panel of five leading experts sat on stage and held a discussion. They said that digital sound is continually expanding its presence into the new world of live sound such as concerts, events, and the theater. Digital technology enables efficient settings, fast reproduction of mixing data, improvements in PA sound quality, and construction of acoustic spaces. Technicians and creators involved with system development discussed, questioned, and made presentations about applications and related issues. The latest PA equipment was exhibited after the event.

This year marked the 48th Broadcast Technology Report conference since the inception of Inter BEE. It continued for three days in the international exhibition hall. There were three conference tracks with nine sessions each: video technology, data broadcast/digital service, and production technology/broadcast technology. Key and local broadcasters made 65 different presentations. The second day afternoon sessions included a special project on broadcast media's role after the great earthquake. Named "Verify! Broadcast Technology and the East Japan Great Earthquake," the session featured a panel of members of key broadcasters, as well as broadcasters from Iwate, Miyagi, and Fukushima prefectures, who discussed the verification and inspections that were done in the days following the quake, including verifying local needs. A lively discussion ensued about preparations and issues involved with responding immediately after an earthquake and resulting disaster. This serious topic drew an overflow audience, so some guests watched the panel discussion on a large display screen set up in an adjoining hall. The session was a resounding success.

At the Fourth Annual Tutorial Sessions, a part of the conference that got its start in 2008, lecturers from leading equipment makers and production companies offered easy-to-understand instruction on useful and practical technology. These sessions were intended for students and young engineers of the future. At the video session, which was tied to the video symposium, the topics included "essential basics of network technology and practice for stage lighting and video expression" and "practice and real examples of live video transmission technology." The lectures were practical and very easy to understand. At the acoustic symposium, issues were brought up regarding essential technologies for production sites, including "digital wireless microphone theory and application" and "practical use of loudness control," something that is becoming a big issue. All sessions were packed with budding creators and future engineers.
Video technology journalist (academic expert) <Takehisa Ishida>