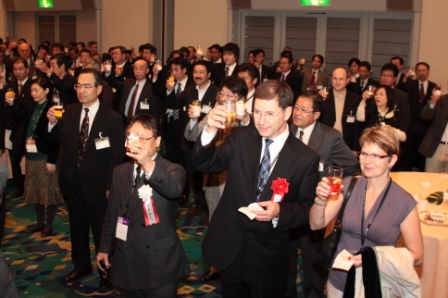 November 19th, 2008 marks the 44th time Inter BEE is being held and a total of 781 companies and organizations will be participating ― the largest number in Inter BEE history (including 400 companies/organizations from 26 countries and regions). As one of the world's three main exhibitions of broadcasting equipment ― in addition to NAB in the US and IBC in Europe ― Inter BEE has shown its high levels of international interest as the exhibit halls were lively and filled with people. The reception party held last night at the APA Hotel & Resort Tokyo Bay Makuhari to celebrate Inter BEE was a great success, attracting over 554 participants including exhibitors, industry participants, and media personnel.

This is the 44th Inter BEE, and together with NAB held in the United States and IBC in Europe, it is one of the world's three major broadcasting exhibitions. Inter BEE showcases top-level video and broadcasting related equipment, lighting equipment, and related applications and solutions from Japan and overseas under one roof, making it Asia's largest broadcasting-related exhibition.

At Inter BEE, a diverse range of leading-edge technologies have been announced by exhibiting companies to address the needs of people involved not only in broadcasting, but also those working in studios, post-production, and content creation. Additionally, we hope that everyone will be able to experience the great variety of the new technologies created from the synergy of hardware and software, such as system technologies that enable high-level editing of software developed both in Japan and overseas.

To call attention to rapidly-changing global trends in technology, this keynote speech marks the beginning of today's Inter BEE Forum 2008, which is closely linked with this equipment exhibition that covers the diverse technical fields of broadcasting, communications, IT, audio, and writing.

As well as inviting broadcasting, video, and acoustic specialists from Japan and overseas, attention will be focused on the Tutorial Sessions designed to promote the training of future personnel in the industry. The Asia Content Theater, which will introduce top-level content, will also be held throughout the duration of the exhibition. We look forward to your participation in both the tutorial sessions and the theater.

Inter BEE is an exhibition that meets the promotional needs of domestic and overseas markets facing the challenges of a new era such as increased networking and the shift toward high definition. In conclusion, I would also hope that Inter BEE will be the optimum venue for both the exchange of information regarding increasingly important measures to counter global warming, and for the promotion of industry businesses.

I am sure that the broadcast of the Beijing Olympics held in August last year brought out a range of emotions, and left an indelible impression on viewers as it was the first terrestrial digital television broadcast to cover the whole of Japan, and we were pleased to be able to provide viewers around the country with dramatic, live broadcasts. I am also very happy that we can present to you at this international exhibition, the latest evolution of the technologies behind these live broadcasts.

There are only 977 days left until the end of terrestrial analog broadcasts in Japan and as commercial broadcasters, we are endeavoring to make this migration to digital broadcasts as smooth as possible by developing transmission sites, and carrying out activities to increase viewer awareness of digital broadcasting.

Of course, we cannot succeed based solely on the efforts of the broadcasting industry so we are also receiving the cooperation of broadcasting equipment manufacturers, home electronics manufacturers, government, local bodies, and other concerned parties, and we hope to receive even more assistance and cooperation in the future.

Additionally, throughout the duration of Inter BEE, the National Association of Commercial Broadcasters in Japan will also hold the 45th NAB-J Symposium of Broadcast Technology in the International Conference Hall. This symposium is part of our effort to introduce the latest technology to commercial broadcasters, and we hope you take the time to attend it.

In conclusion, I would like to pay tribute to the Japan Electronics and Information Technology Industries Association that has organized this event, and also to all other parties that have been kind enough to offer their support. I sincerely hope for the success of this exhibition, and for the further growth of the companies that have made the effort to participate.

At present, the full switchover to digital broadcasting is a prominent issue and this migration is scheduled for completion in the United States in 90 days, whereas Japan's switchover date is only 977 days away. I would like to propose a toast to the realization of this enormous task and the successful deployment of the required equipment, as well as to the continued health and prosperity of everyone here. Thank you for your time.

We have started the final countdown to the full transition over to digital television, and I am sure that Japan can learn a lot from the current situation in the United States. Consequently, I feel that exhibitions such as Inter BEE are very important as they serve as venues where important industry information can be exchanged. Terrestrial digital broadcasting is the way of the future, and will be of benefit to everyone. I hope to see you all at NAB next year.