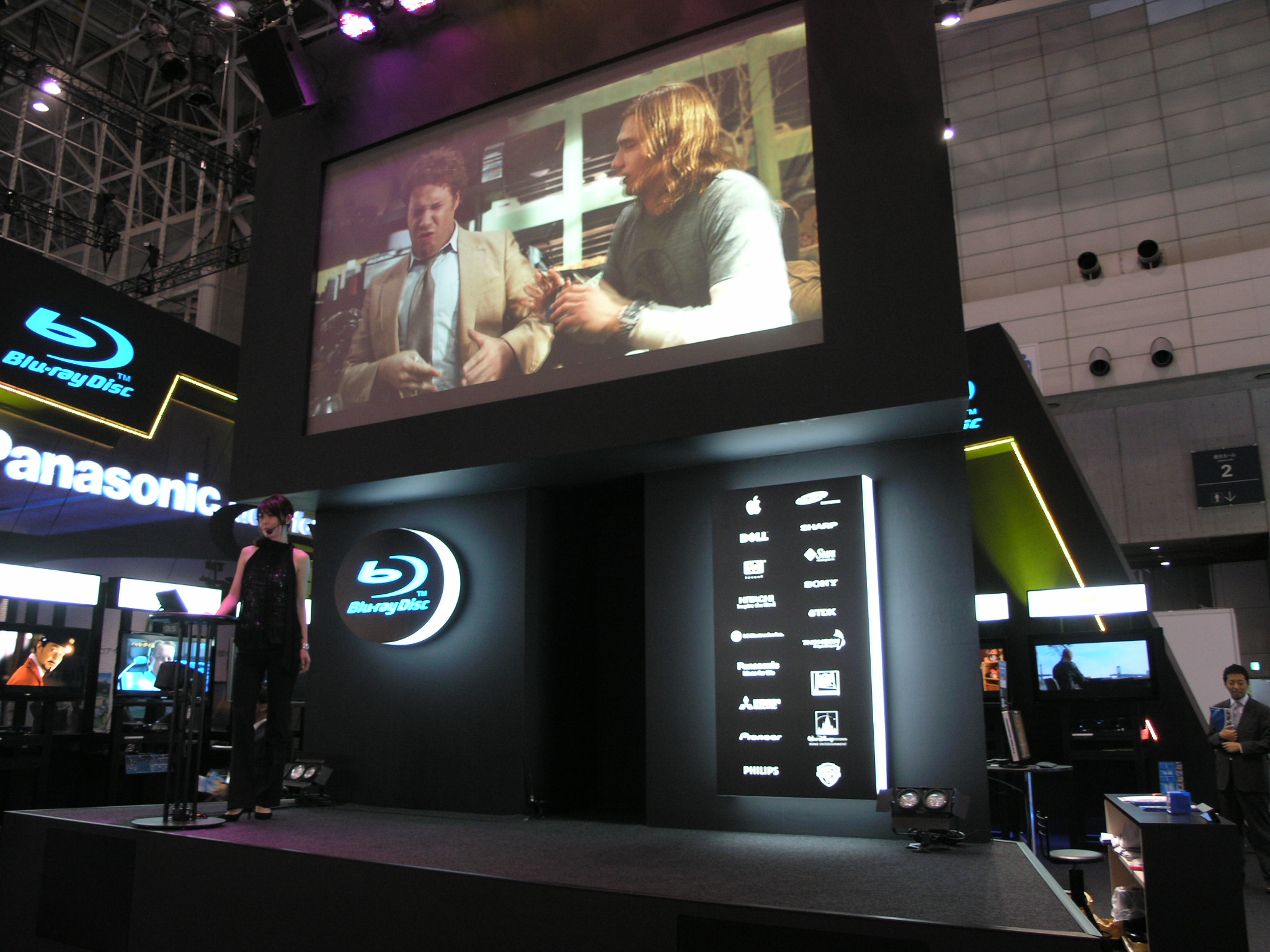 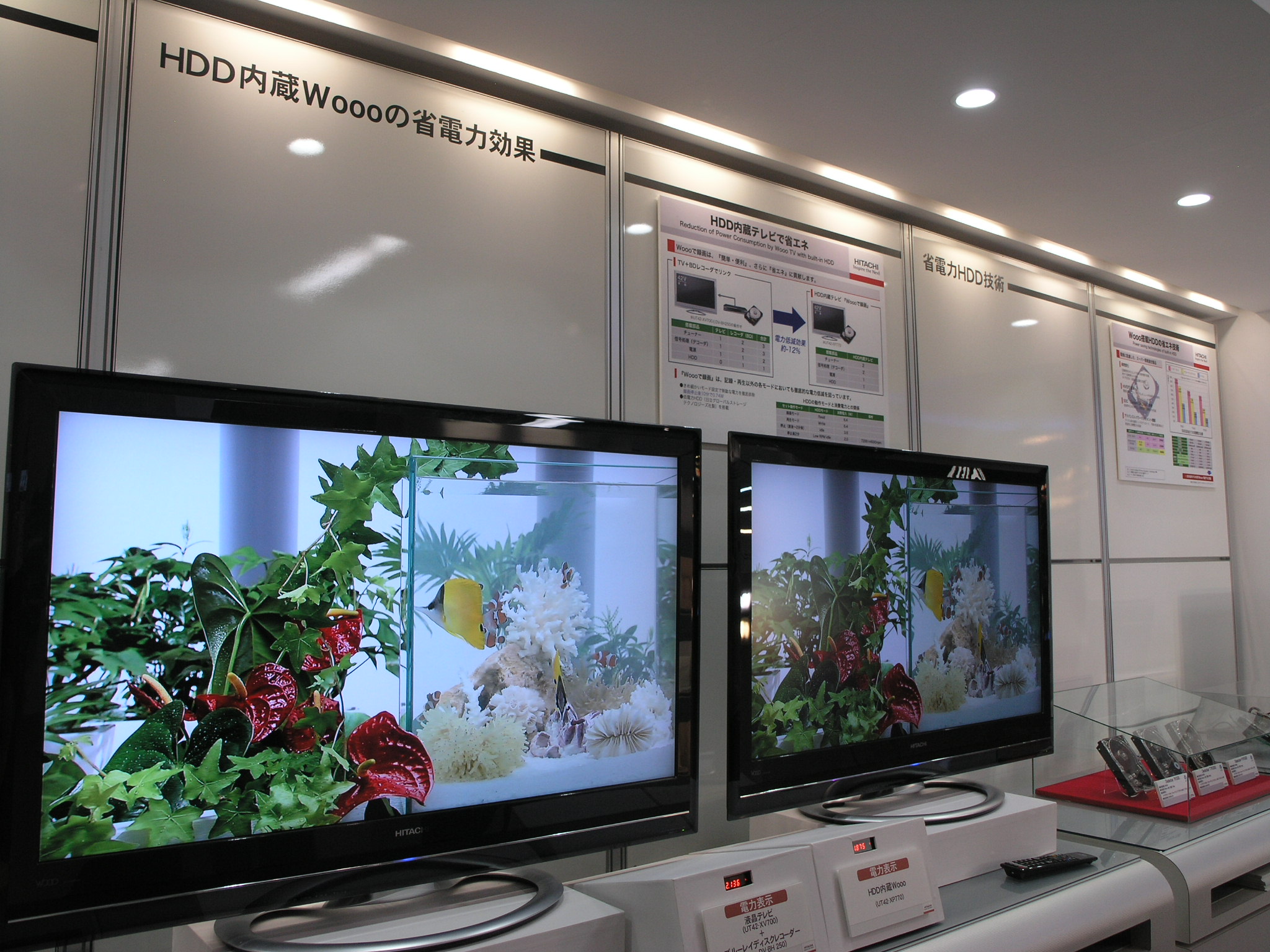 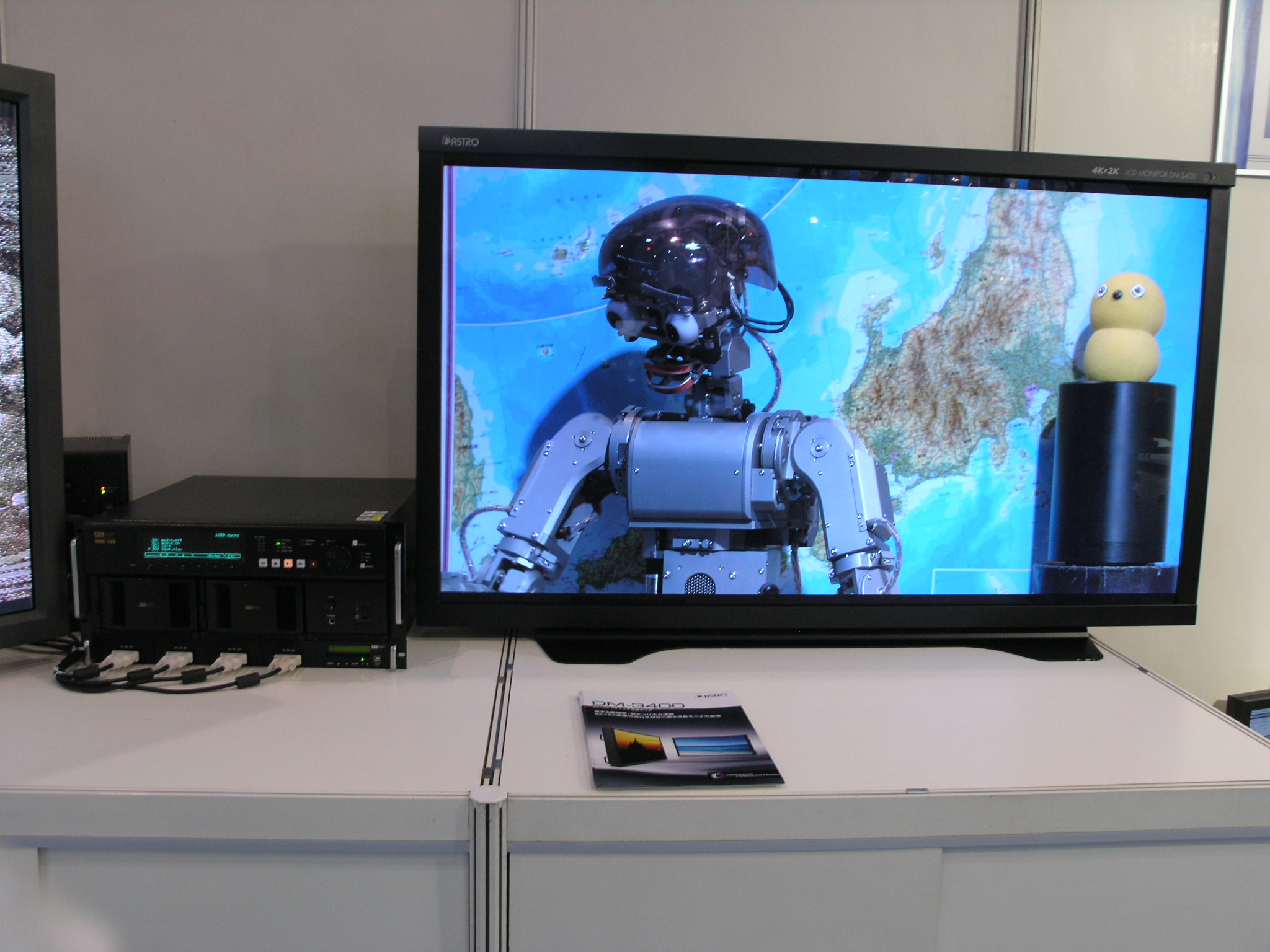 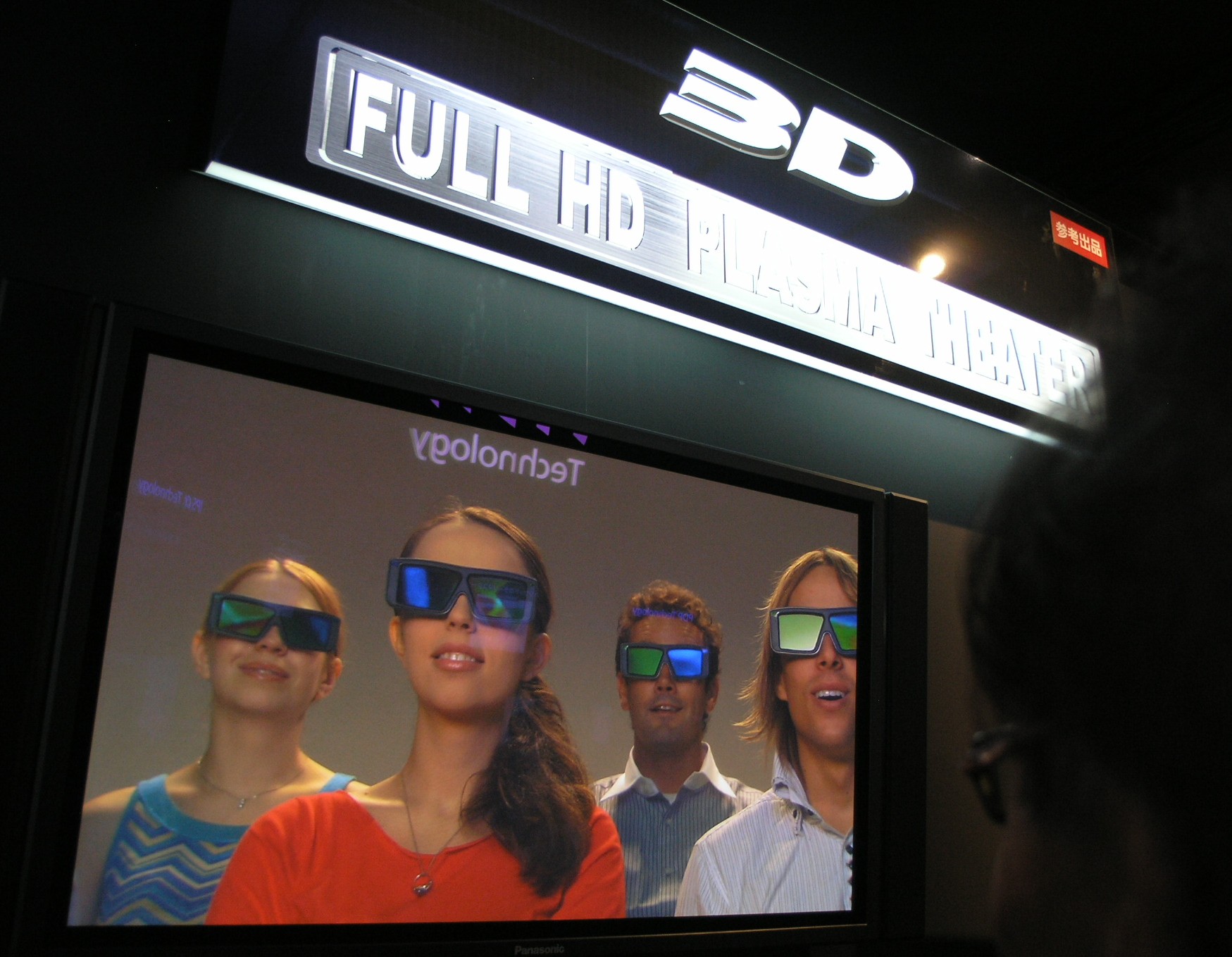 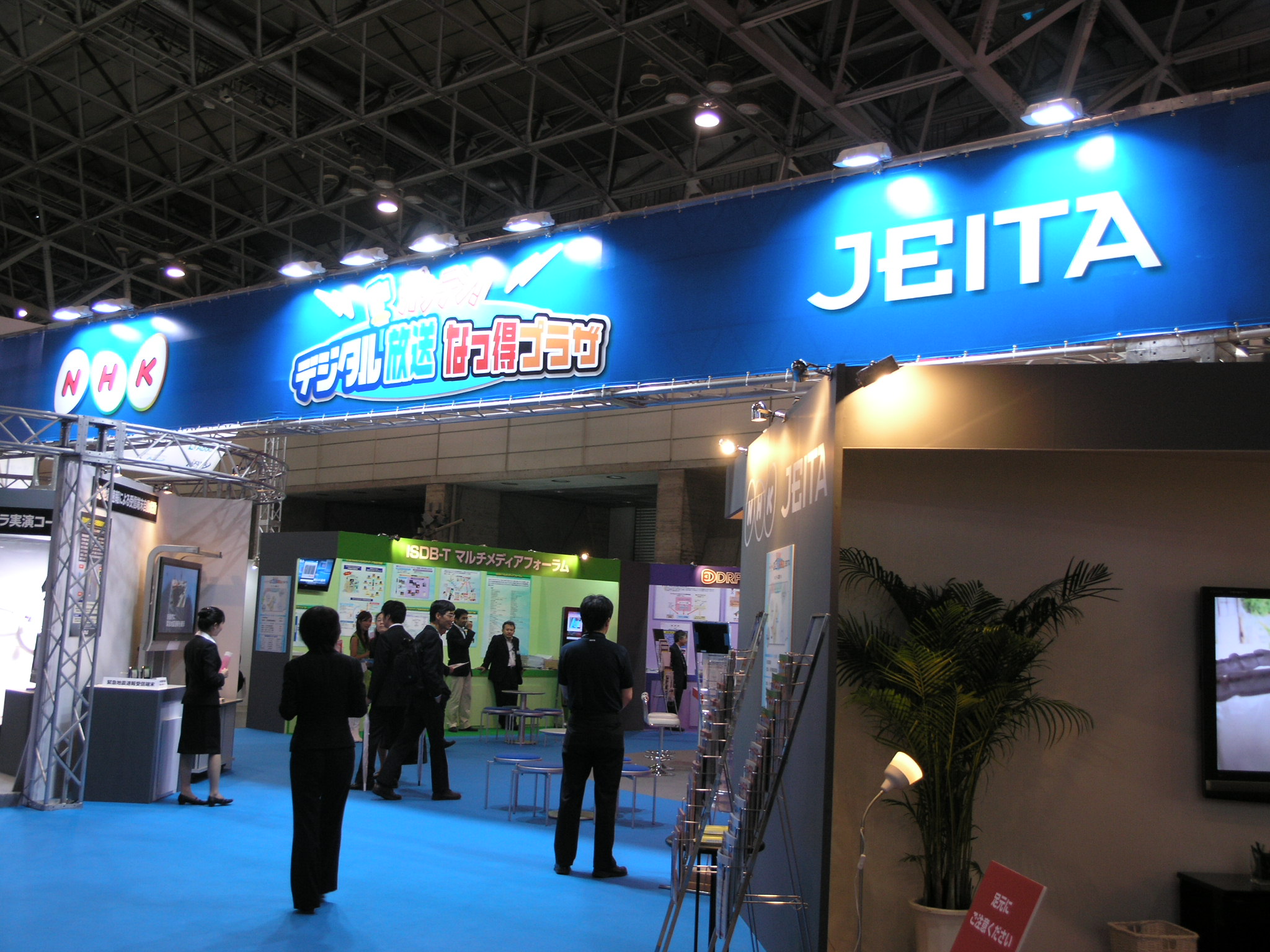 In part one I mainly discussed the trends in thin television developments, however in this section would like to discuss other topics such as memory media, digital cinema and 3D imaging.
With increasing high-quality content such as Hi-Vision broadcasting and video production, there is an accompanying increase in demand for high-speed, high-capacity next-generation DVD media. These include both the well-known Blu-Ray Disk (BD) and HD-DVD formats, and until last year the separate exhibits competed to dominate. However, since the format war has ended, it is clear that the market, formerly watching for developments, has begun to move forward at a rapid pace. Currently the BD Association has more than 190 member companies involved in areas such as the hardware, movie, computer and game content industries. The booth featured a kiosk with 12 large size television screens where various companies used BD players to show movies such as The Chronicles of Narnia and The Godfather, as well as a variety of game software. The current BD standards are storage capacities of 25 GB for a single side, 50 GB for double layer with normal transfer speeds of 36 Mbps or 72 Mbps for double speed. The models each company presented all share the same basic features, however, each company was proud to present their unique image quality improvement technologies alongside the format's long recording time, high transfer speeds and improved search functionality and so forth.

BD recorders/players were also on exhibit in company booths for Sony, Panasonic, Sharp, Pioneer, Mitsubishi, JVC and others, further reflecting the state of the market with a rich product line-up from all companies. Most of the models are equipped with a hard disk drive with 250GB, 500GB to 1 TB storage-capacity and dual-layered BD. Many of the devices adopt AVC H.264 video encoding, and are equipped with variable bit rate recording mode (regardless of the broadcasting system BS, CS or terrestrial) and a longer recording time mode that records in lower bit rate. The high-end machines record up to 500 hours of high definition at the lower bit rate on the hard disc, with up to 24 hours on BD. In direct mode for high-quality recording, the machines are capable of 125 hours recording on the hard disc drive, and up to 6 hours on BD. Transfer from the hard disc drive to BD is done at speeds of 4X or 6X, and some of the devices have modes capable of ultra-high transfer speeds at 40X, depending on the bit rate. Almost all of the machines are Dubbing 10 compatible. In terms of video image quality, many devices featured IP (interlace-progressive) conversion signaling for a realistic look, which emphatically reveals detail by analysis of data lost from compression during software production and broadcasting, and noise suppression system while maintaining video quality, as well as some devices using bit increase signal processing to deliver smooth tonal transitions and subtle gradation. In addition, answering to the eco-friendly needs of our times, all devices have low energy requirements, and usage of environmentally friendly materials.
Slim-profile televisions with built-in hard disc drives for video recording were also on exhibit. These allow for simple recording and replay via the TV's remote control, as well as making time shifting between programs an easy task. In recent years, hard disc technology has progressed with high-density perpendicular head recording enabling thinner, more miniaturized high-capacity disks that can be mounted in the rear of flat-panel televisions. Hitachi emphasized the ecological friendliness of further reducing power consumption by incorporating recording functions. Hitachi's model featured a 2.5-inch drive with 250 GB recording capacity (about 32 hours of terrestrial HD broadcast recording), easy-to-use programmable recording settings via the electronic program guide (EPG) accompanying digital broadcasts, and a slot for removable iVDR disk (80 to 160 GB) for creating a library or personalized disks without worrying about running out of available disk space. Toshiba exhibited their slim-profile television with built-in HDD, featuring two types of drive - 2.5 inch or 1.8-inch - with 300 and 250GB capacities respectively. The television also allows increased disk capacity with peripheral LAN or USB hard drives, easy record programming with EPG, and quick program searching of listed recordings. Panasonic exhibited a flat-panel television model with a 1TB (for storage of about 120 hours of terrestrial HD digital broadcast) internal HDD, and simple-to-use record programming and playback.


The National Institute of Information and Communications Technology (NICT) presented a wide variety of advances stemming from their research in many of the booths at the show, but I would like to touch on the developments with a video related theme. In the Ultra High-Definition Systems corner, there was a 4K JVC camera shooting live video images of the booth displayed on a 4K LCD monitor (Astro), and beside that a non-compressed disk recorder (KGC) replaying video through a 4K ultra high definition monitor. Also fascinating was a 4K CG presentation in which the camera angle was freely moved around the room and then the image emulated in a virtual set. There was also a 3D, full High Vision theatre requiring no special 3D glasses in an adjacent corner. This prototype 3D display was created with support from JVC, and utilized a built-in projector array with image quality greater than 100 million pixels, aimed at a 70-inch screen. Research into this type of display is ongoing, with the aim of creating bigger screens with even greater image quality potential. Also presented was an experiment to demonstrate the possibilities of stereoscopic High Vision live transmission via IP. In this experiment, images from a stereoscopic High Vision camera set up at Dogo Spa in Matsuyama City were relayed to Makuhari Messe via Ehime University using the NICT "JGN2plus" circuit. Using a 46-inch full HD LCD TV (Hyundai) with Xpol for 3D (Arisawa Mfg.Co), visitors were able to enjoy live 3D video (wearing polarized glasses) of Dogo Spa's "Botchan" train. In an adjacent booth, NHK MT (Formerly NTS) also presented their 3D video content recorded on BD, using a display similar to that mentioned above.

Several booths at the exhibition featured 3D video presentations. In a keynote lecture, the BD Association said that they would like to see BD usage for the spread of 3D content. Panasonic presented their "3D full HD theatre" - a system using video from a BD player displayed on an L-R 2-channel full HD double-speed 103-inch PDP, viewed through synchronized active shutter glasses. Japan BS Broadcasting was showing a broadcasting service, which was on display at last year's CEATEC that commenced in December 2007, on the Xpol-type 3D TV. Some other interesting technology was from Tohoku University's Uchida Laboratory - a transparent screen for 3D display that uses a special stick-on filter to polarize light, which makes 3D images viewable even in bright environments such as operating theaters and aquariums. JVC also exhibited special signal conversion technology that gives a 3D-like depth to high-definition 2D. This processing is said to be effective for insufficient 3D content dissolution such as entertainment, displaying the 3D video on a stereoscopic television similar to those outlined above.

As sponsors, JEITA and NHK set up the "Gatten Digital Broadcasting Nattoku Plaza." Set up in a wide area around the entrance to Hall 1, the exhibit offered comprehensive and easy-to-understand and enjoyable information about digital broadcasting with the inclusion of a consultation corner. The main stage featured large scale video presentations and short skits to help explain the complete shift to digital broadcasting scheduled for 2 and a half years from now, as well as current developments in this transformation with NHK broadcasting's 'digital Q,' 'PR Spot' presentations and so on. In the new broadcast services corner NHK demonstrated their on demand broadcast service scheduled to commence in December. They set up a 5.1 surround sound system and a 65-inch flat-panel television, displaying content such as the Beijing Olympics and the NHK Symphony Orchestra to allow visitors to experience the full effect and charm of surround sound in the body. The exhibition corner featured emergency earthquake reporting, ultra high-speed/high-sensitivity camera technologies as well as recording devices compatible with the much-talked-about 'Dubbing 10' and the '1-segment service' that is capable of seeing, hearing, and recording on the go. The exhibition also featured a wide variety of presentations including the "Quick Guide to Terrestrial Digital Broadcasting" from the Association for the Promotion of Digital Broadcasting (Dpa), "Reception Methods and Diffusion Roadmap" from the Japan Cable and Telecommunications Association as well as an introduction to digital radio services and the ISDB-T multimedia forum.


Photo 1
The scene at the BD Association Kiosk.