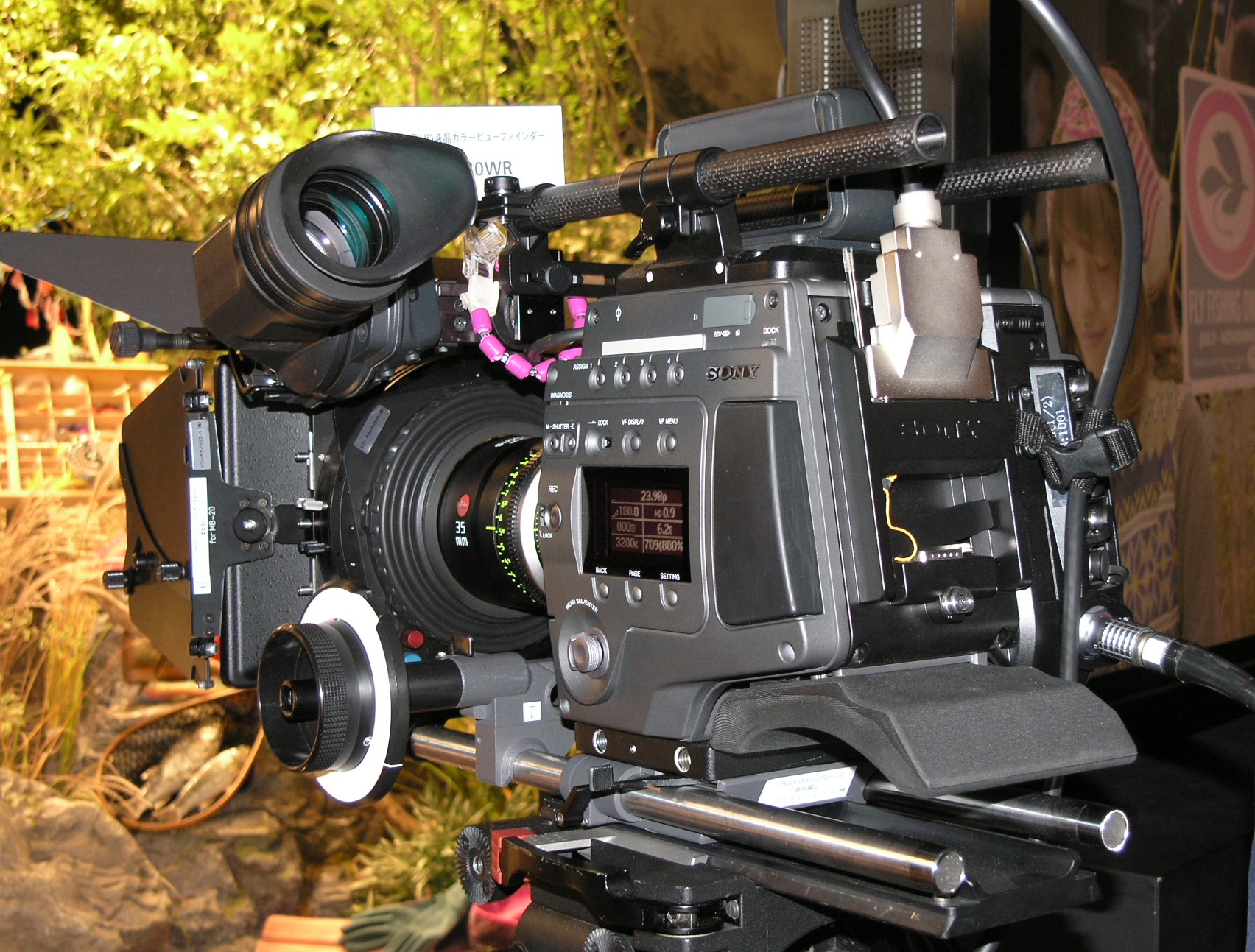 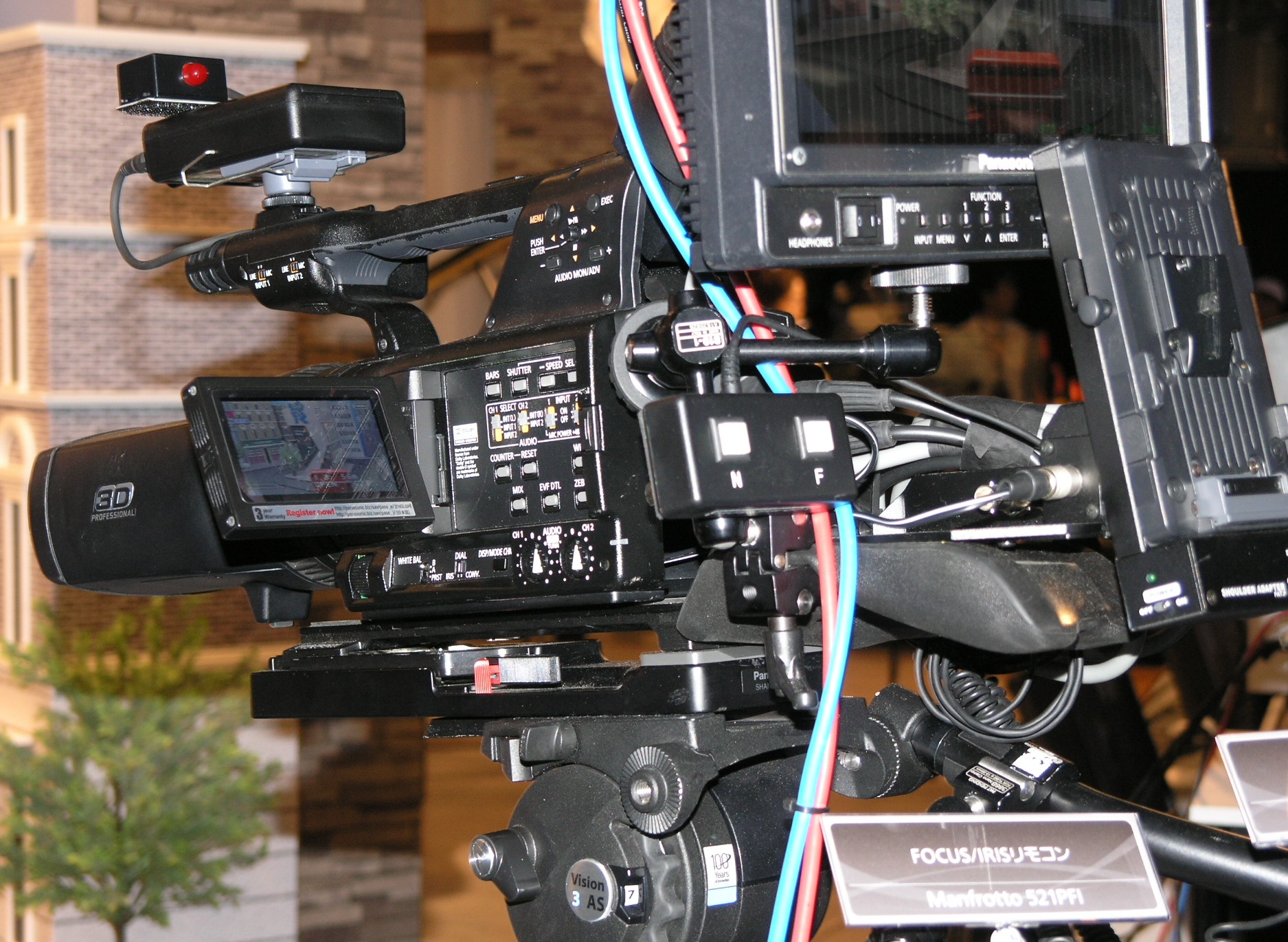 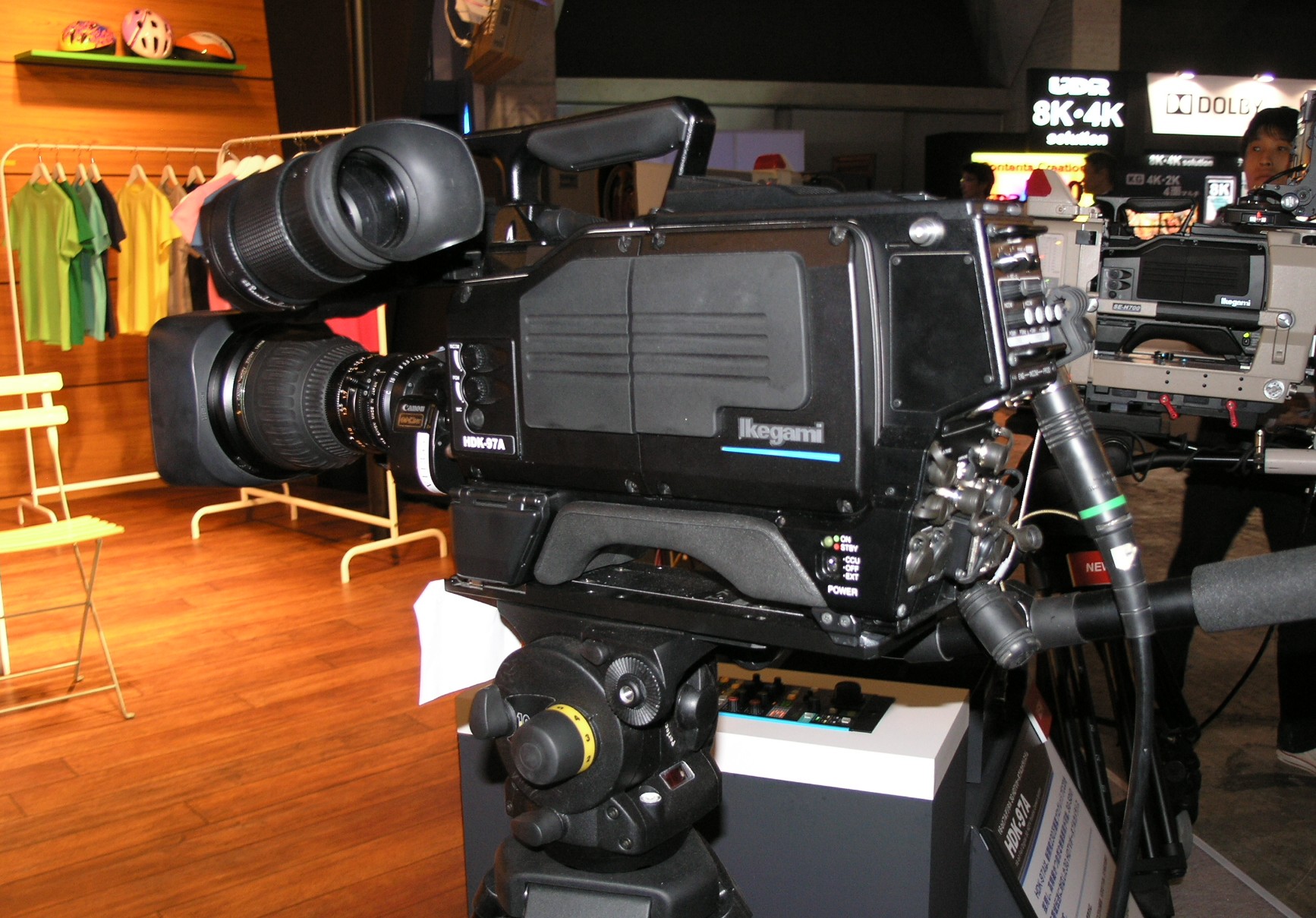 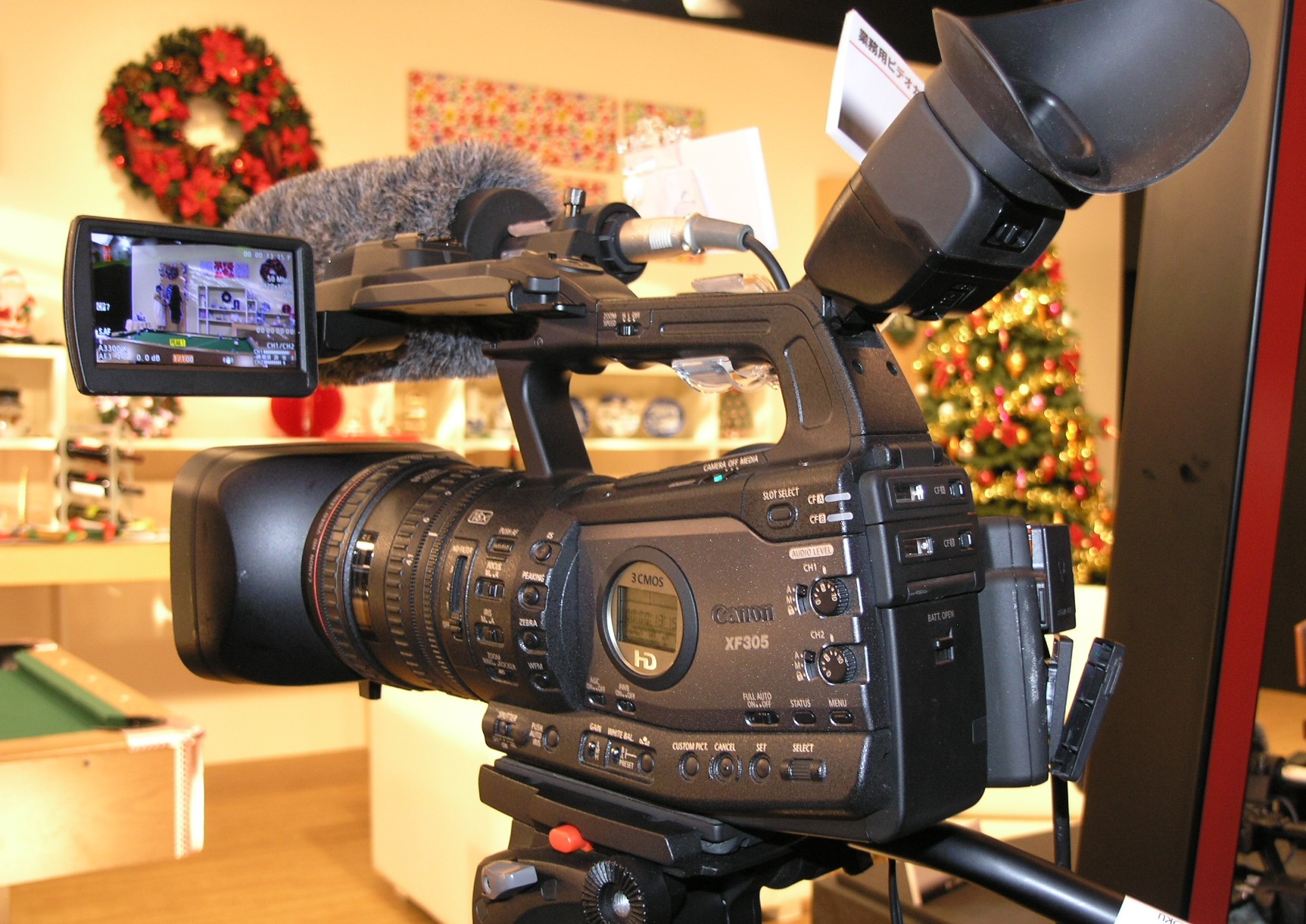 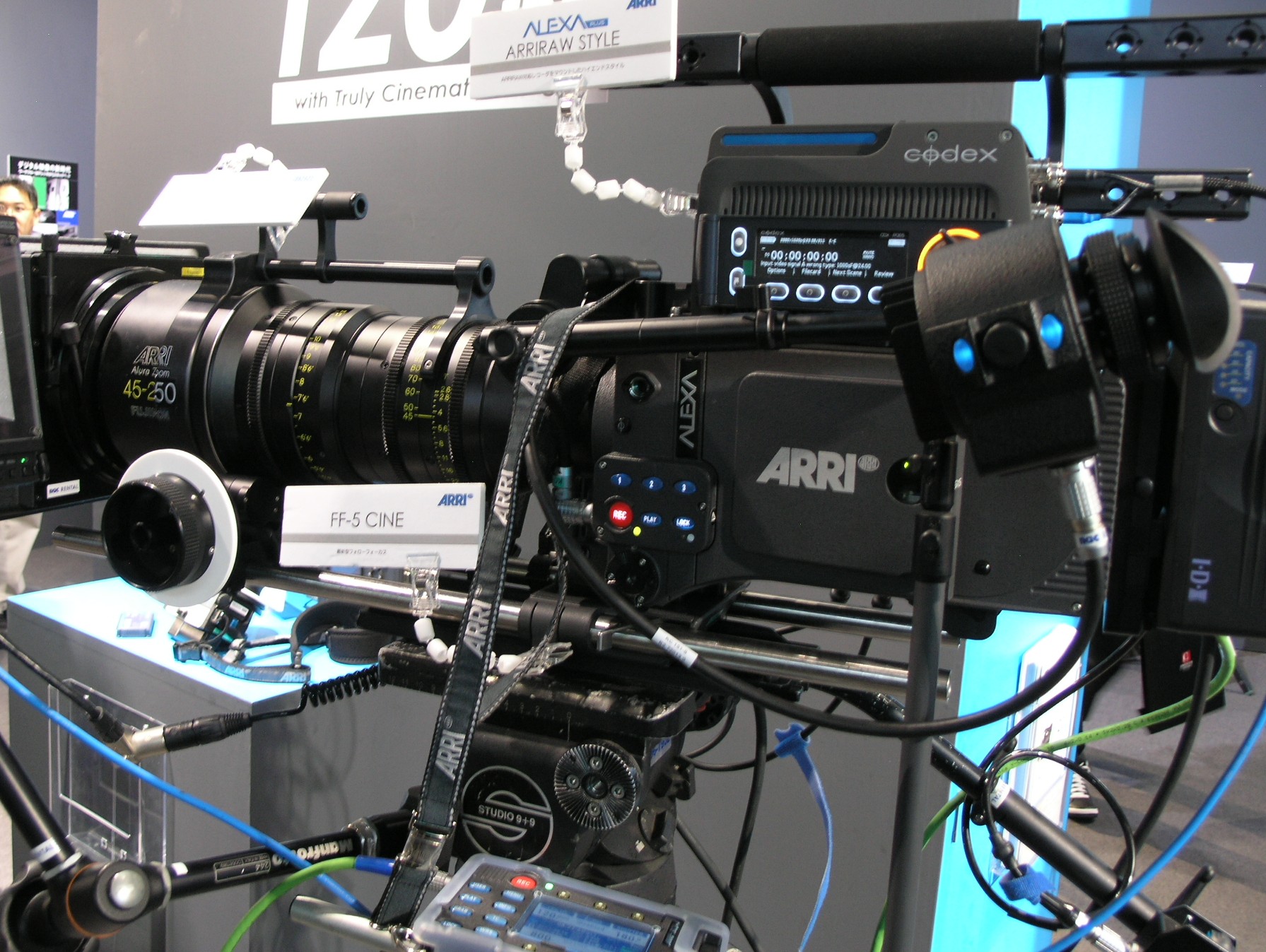 In Part 1, I discussed this year's event in general and introduced the joint events. Now I would like to spend three columns taking a look at tech trends in cameras, production and displays.

In Part 2, I will look at the continuing growth in television camera technology, and matching development in video media. The television cameras were the stars of the show, with visitors able to try them out, and cameras on prominent display at every booth. Since the digital transition, full HD has become standard for video cameras, which are now diversifying toward different poles, with 3D content cameras and high-detail 4K cameras for digital cinema, offering higher resolutions and more features on the one hand and more compact business and SLR cameras on the other.

Sony had all kinds of cameras on display, but the centerpiece of its booth this year was the high-resolution F65, which is equipped with an 8K CMOS sensor panel and can be used to produce in HD to 4K and beyond. With an image sensor equivalent to super-35mm, it has better performance than any previous digital camera. It is capable of a high frame rate of 1-120 frames per second and a maximum of five speeds for 24p video production or four speeds at 30p for commercials or television. With a good dark space SN ratio and gradient reproduction eliminating blown-out highlights and blocked-up shadows, it also has a wide color gamut, giving it a film look. Also, it can be docked with the newly-developed SRMemory recorder, allowing it to record 16-bit RAW data. Sony projected high quality content shot with the camera on a large screen in a suite with a 4K digital cinema projector. They also showed a lightweight 3D shoulder camcorder outfitted with three 1/2" CMOS chips that is compatible with XDCAM EX recording formats and media. It uses a 3.5" parallax barrier 3-D viewfinder with various display modes to take 3-D video without glasses.

Panasonic had an extensive lineup on display including the P2HD and AVCCAM. In the P2HD series, they displayed a model with the same 2.2 megapixel 2/3" CCD as the P2 Varicam, but even smaller and lighter and with higher performance. Also, the business P2 Handicam used a 2.2 megapixel 1/3" 3MOS and had two P2 card slots, and now supports the AVC-Intra 100/50 codec. They also displayed a low-price full HD camcorder with a micro 4/3" mount that uses the large 4/3" MOS sensor that has become popular recently. The company has also officially decided to manufacture 3D televisions on a large scale for the 2012 London Olympics. It displayed all kinds of 3D equipment that will be used to produce the programming, along with two integrated two-lens 3D camcorders. One was a model that is already being used to produce a great deal of 3D content both in and outside Japan, and the other featured increased performance and functionality, to be used for broadcasting and film. Combining the 2.2 megapixel 1/3" 3MOS sensor and AVC-Intra makes it possible to record high quality 3D video in 10-bit, 4:2:2 full HD. With a 17x zoom, the integrated twin lenses, assembled with high precision, don't require prior adjustment of the optical axis or angle of view, while focus, zoom and iris can be adjusted accurately in both the right and left lenses at the same time. Compact and easy-to-use, it allows 3D content production with a high degree of mobility.

Ikegami Tsushinki also displayed their already successful tapeless GFCAM, with other newly-developed models. Their new flagship model uses a 2.3 megapixel progressive CCD, supports 3G-SDI broadband output, and features natural gradient reproduction with 16-bit image processing. By supporting a 3G signal, it can also shoot in 2-speed slow motion. They also displayed an HD multipurpose camera that is as high quality as the typical studio camera but more compact, with high color reproduction even in low light conditions thanks to its AVC function, along with a model that can be used with large 4/3" CMOS sensors and cinema lenses.

Canon, which has done well with its lenses for television and cinema and SLR cameras, has recently moved actively into video as well. In addition to the compact file-based movie camera it also exhibited last year, it showed a high-end model with a 3-chip imaging element (1/3" CMOS) and a 4" high resolution viewfinder, to be used to produce films or dramas with an emphasis on image quality. They also announced a handheld model suited for use in reporter interviews. They also caused a stir with their new entry in the growing field of SLR cameras with video functions. The new model can continuously shoot 120 photos at a maximum rate of 10 per second. It should be used not only in photojournalism but also by creative content producers like movie cameramen and filmmakers.

Nac Image Technology exhibited a successor to its Emmy award-winning high-speed camera jointly developed with NHK, with upgraded performance and functionality. With a 2/3" 2.2 megapixel 3-chip CMOS and 96GB of memory, it can use broadcast camera lenses, shoot variable speed photography from 24-1000 fps in full HD and record 38 seconds of 300 fps video. It is four times more sensitive, and an image processor jointly developed with Ikegami Tsushinki raises image quality and eliminates flicker. It is progressive scan, providing high quality, slow motion CG composition not only in sports relays but also in films or television dramas. Also on display at the company's booth was the ALEXA, a new film camera-like model in the Alexa series from Arriflex, for which Nac is a representative. It is the same size as previous 35mm models, with a 3.5K resolution CMOS and a PL mount, allowing it to use cinema camera lenses. It also supports full HD/2K/DI (digital intermediate). The camera head and body can be separated and connected by an optical cable, and the small and lightweight head can be equipped with a small crane or 3D rig to improve mobility greatly. It offers a film look with a dynamic range and low noise.

Astrodesign, whose high detail image system was a massive hit, this year displayed a 4K total system, including everything from camera to recorder and display. They exhibited a new 4K camera model that supports micro 4/3", features an optical cable connection between the head and the processor and is extendible.

Photron put out a 2,000-fps ultra high-speed camera in 2048x2048 full HD with a single-chip CMOS. It can be placed on an F, PL or B4 mount, has internal memory and can replay high resolution, slow motion footage immediately after shooting, and can be used for effective video in sports programs, commercials and film production. They also announced that two of these cameras can be mounted on a 3 Rialty rig as a 3D camera.