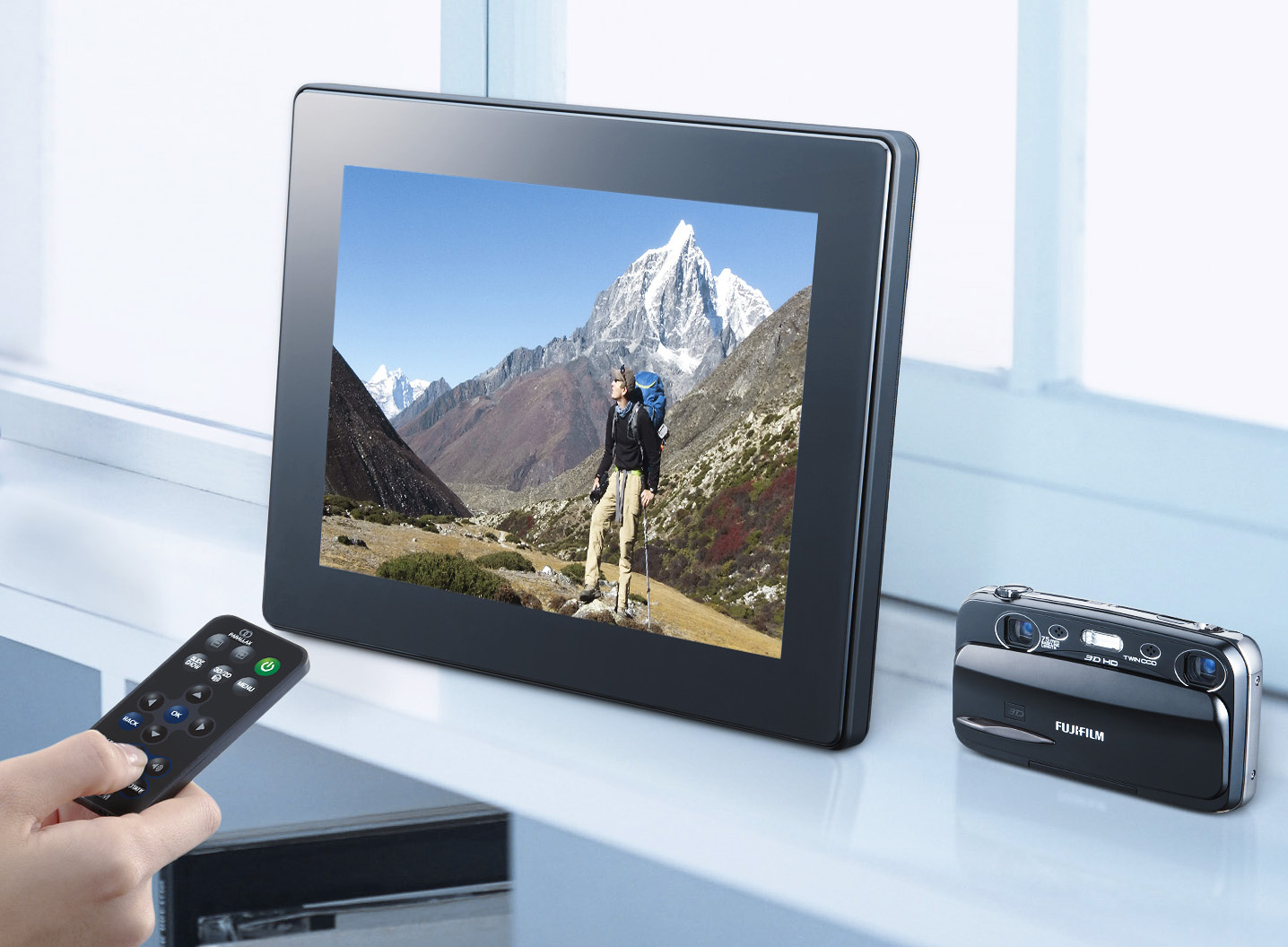 In the Electronic Imaging Corner, Fuji Film is exhibiting its "FinePix REAL 3D V3" 3D and 2D digital photo frame, a new product planned for launch at the end of November. In conjunction with the photo frame, Fuji Film is also exhibiting its "FinePix REAL 3D W3" 3D digital camera, and offers suggestions on how 3D content can be used and enjoyed with these products.

The "FinePix REAL 3D V3" is a digital photo frame that can display both 3D and 2D content, including video as well as still images. It uses a 7.2 inch premium 3D LCD display that is capable of showing high levels of detail and contrast. With full color capability, it can display nearly 17 million colors. When displaying 2D images, its viewing angle is 140 degrees vertical and 160 degrees horizontal. The frame has an internal memory of 512MB and users can choose from eight different viewing angles, easily adjustable via remote control.

Its biggest feature is its monitor, which uses Fuji Film's proprietary "lenticular lenses" to allow users to view 3D videos and still images without special glasses. The surface of the monitor has a series of minute convex lenses that cause binocular disparity to create the 3D effect. When displaying 3D images, its resolution is 800 pixels x 600 pixels x 2 channels, and it can also display 3D HD videos (but not in HD quality).

Another great characteristic is its capability to connect via HDMI (also at high speeds) to display images directly from HDMI-connected devices that support 3D, such as 3D digital video cameras and 3D blue-ray disk players. It can be used as an external monitor for 3D equipment. "It's compact enough to be used in the broadcasting industry as a 3D image verification tool when making TV programs," said Kazuhiro Suyama from the sales team of the Electronic Imaging Division.


A 3D digital camera that can take 3D HD videos

The "FinePix REAL 3D W3" is a 3D digital camera that can also shoot 3D HD videos. It comes fitted with two CCDs with 10 million effective pixels plus two Fujinon 3x optical zoom lenses, making it capable of capturing real 3D images. The LCD monitor uses "lenticular lenses," which allow users to view 3D images with the naked eye. The captured images can be saved on an SD card and displayed on the "FinePix REAL 3D V3" 3D and 2D digital photo frame.