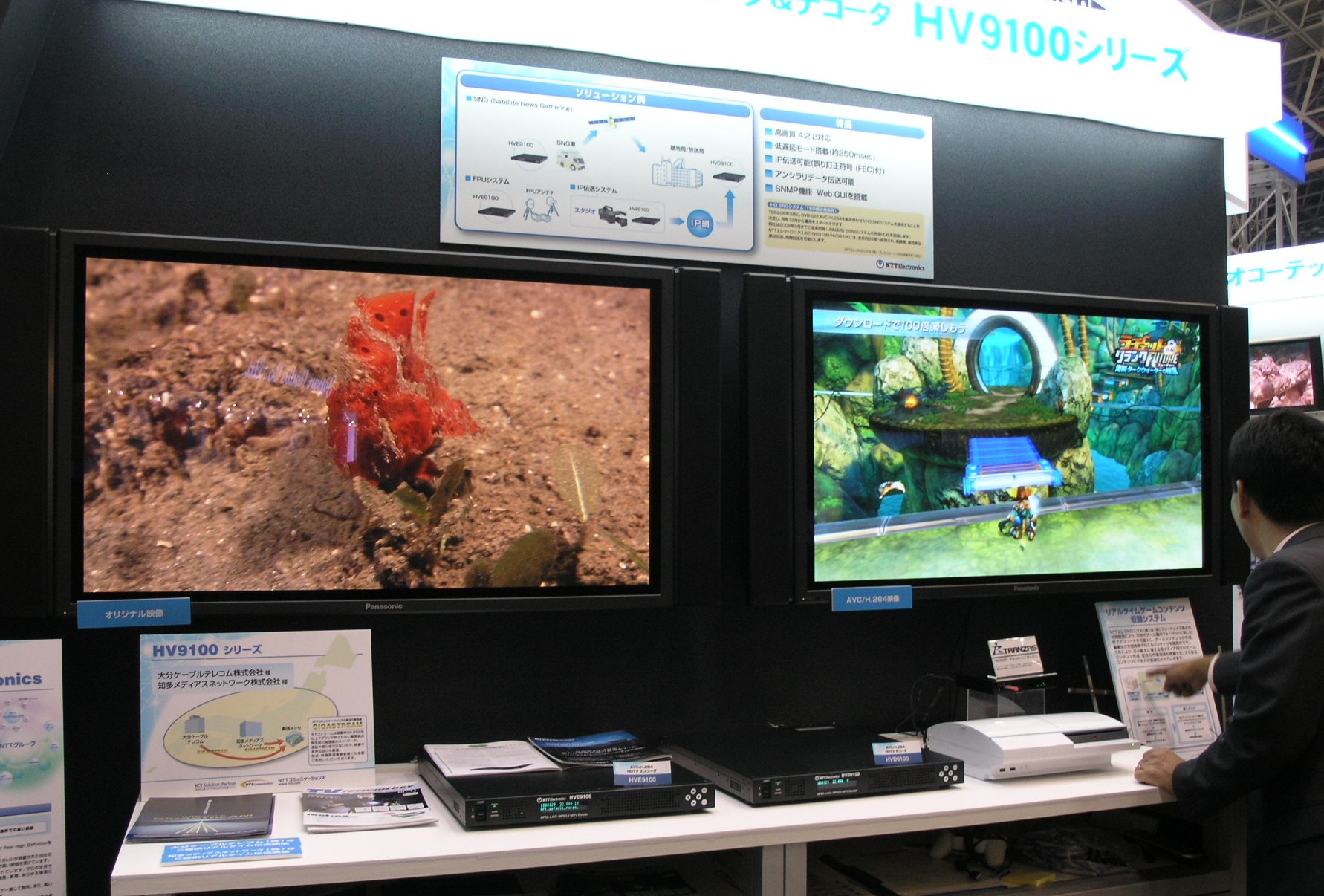 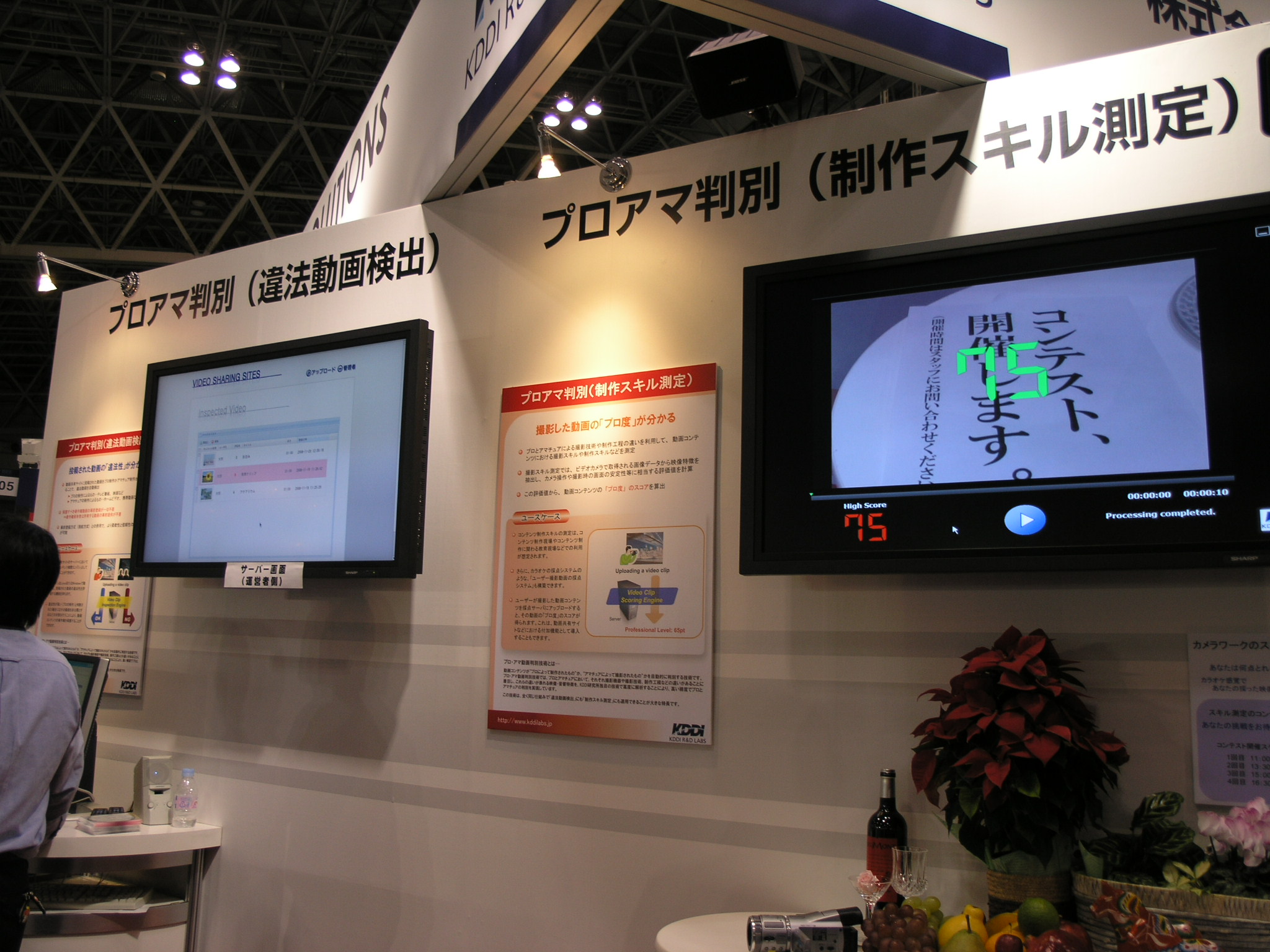 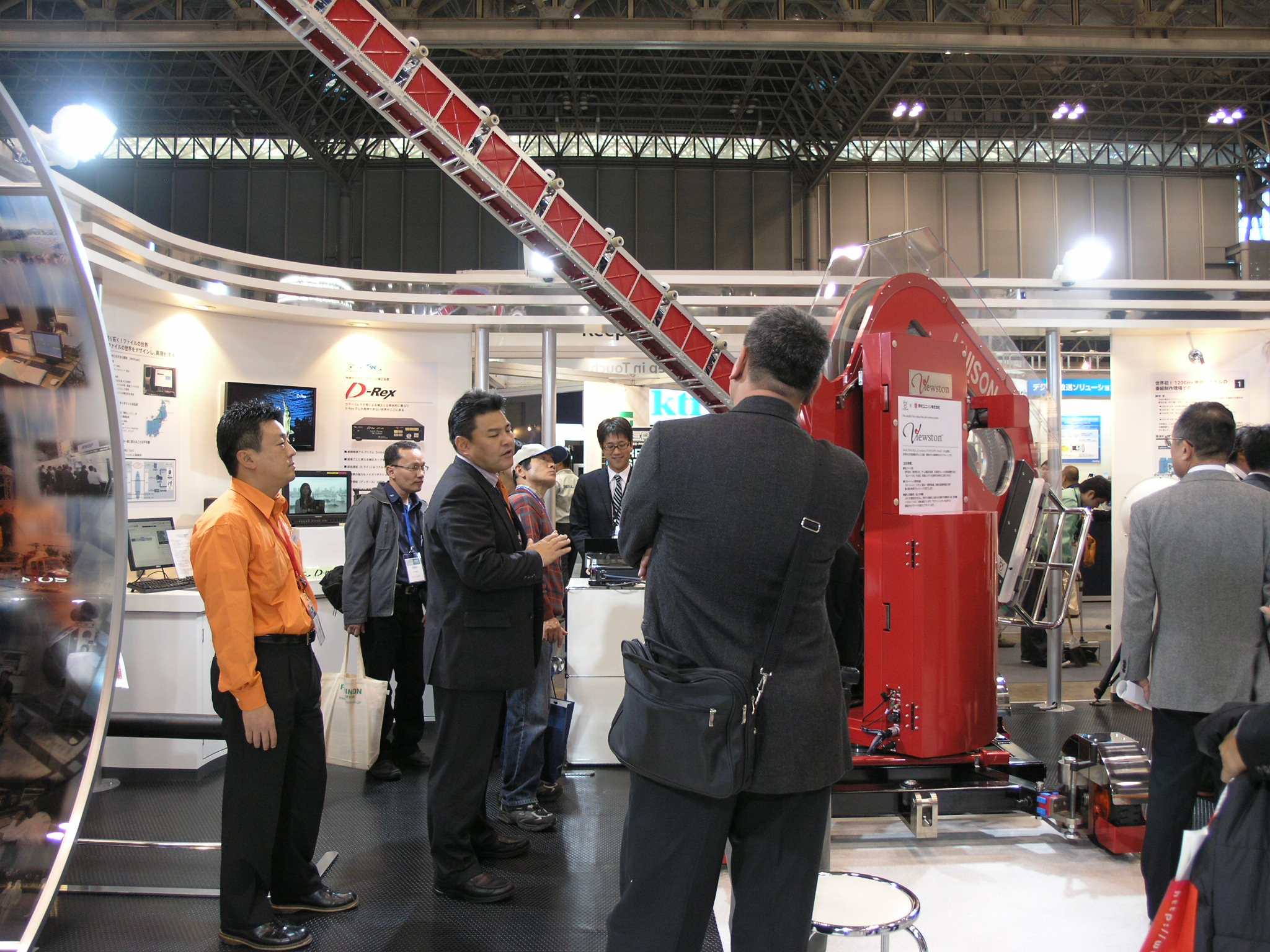 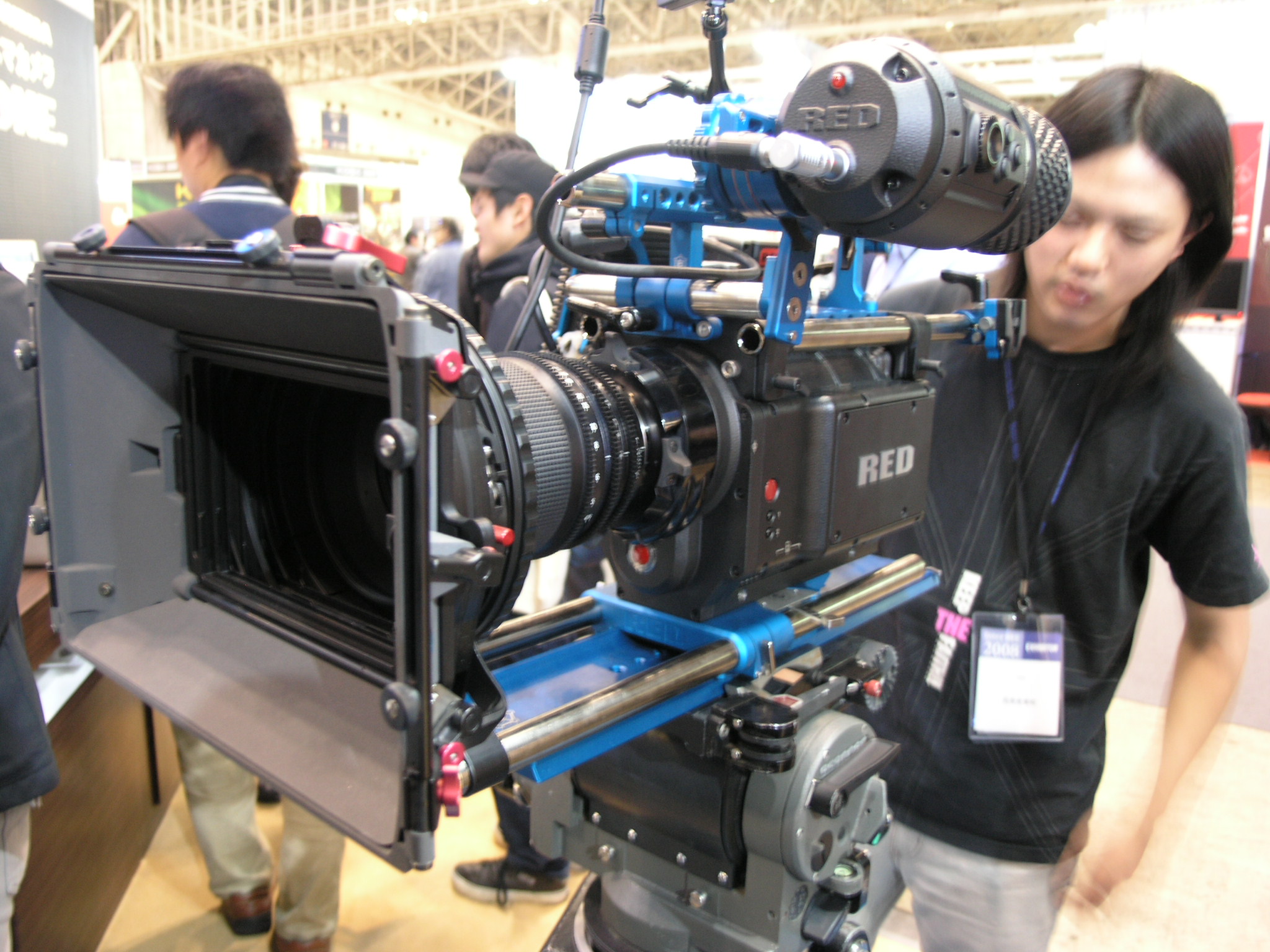 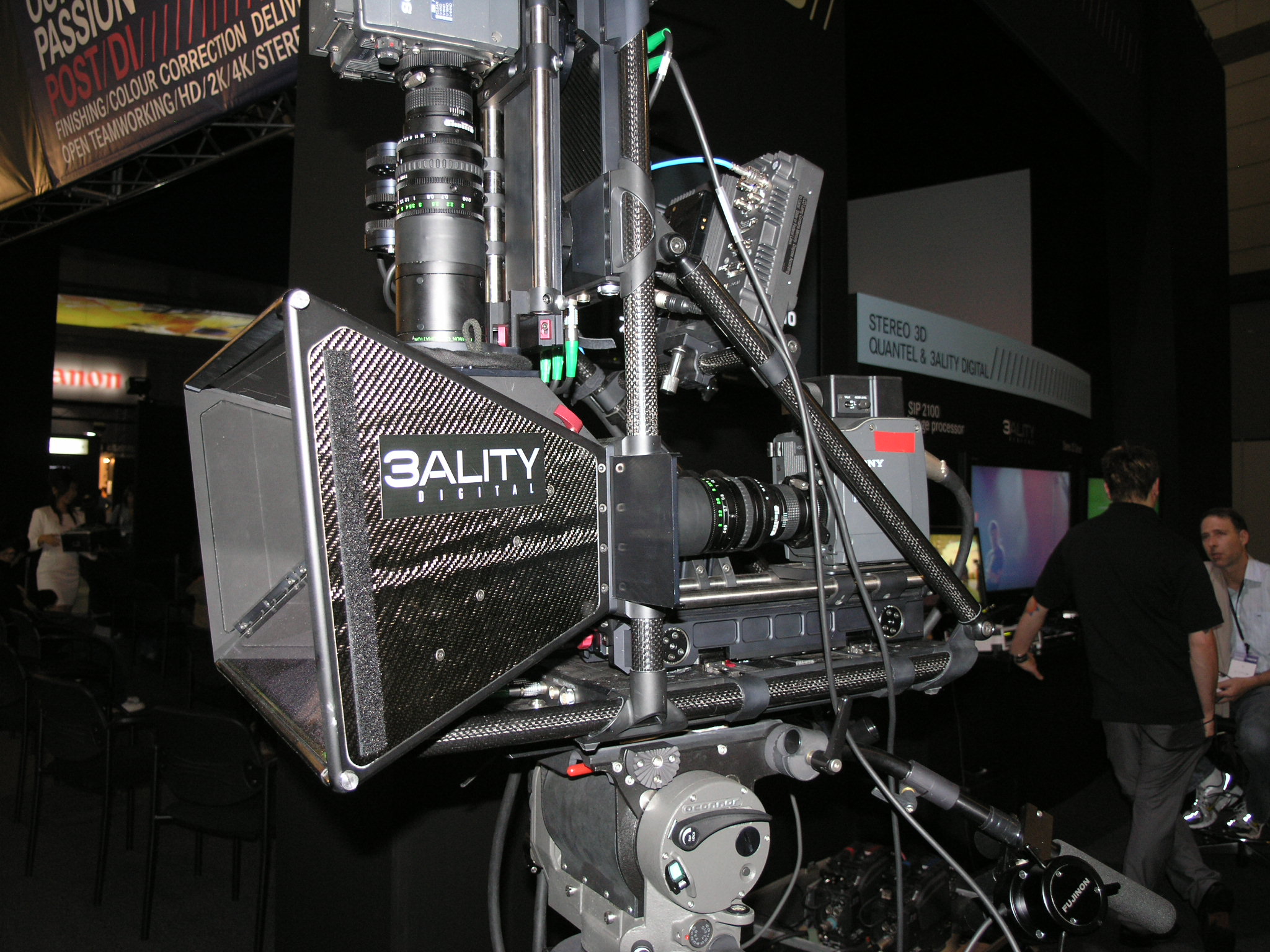 Up to this issue, I have touched upon industry trends such as production systems and visual displays. For this last issue, I will focus on the new trends in coding and networking technologies, as well as topics such as the fast-developing digital cinema and 3D technologies.
Coding and networking technologies are key factors not only for the development of tapeless cameras and file base production but also for the linking and merging of broadcasting and communications, as well as the development of IP technologies. At this year's Inter BEE, I saw many diverse exhibits related to these fields.

The NTT Group companies, NTT EL and NTT AT, exhibited within the same booth their various solutions related to video distribution. A high-end H.264 HD/SD real-time encoder/decoder with 4:2:2 compatibility that can be used for both material and CATV distribution at broadcasting stations, 4:2:0-compatible middle-class machines, an HD/SD MPEG2 encoder applicable for digitizing public networking for shared listening/viewing at hospitals and other community facilities, and a compact MPEG2 IP encoder/decoder were on display. The companies also exhibited a new technology ― a world-first commercialized product ― that distributes ultra-high precision 4K video data encoded/decoded with JPEG2000 in real-time over an IP network. The system is not only compatible with a variety of high-resolution formats (e.g. 4096/3940 pixels, 24p/30p) but also enables frame-by-editing and is suitable for material transmission. It also offers high fault tolerance, easy management, and enhanced collaboration with high-precision video production such as digital cinema. These advantages make this system viable for a number of live-coverage applications such as operas, concerts and sporting events, in addition to high-resolution video display at amusement parks and for telemedical diagnosis use.

Focused in a different direction from NTT, KDDI R&D Laboratories demonstrated and presented many technologies that support content production and distribution via IP, which attracted not only professionals but also the general public as this theme proved to be an interesting topic for many. The IP video transmission system is an ideal solution that suits the changing demands of today, enabling transmission of diverse video content such as live HD video or video materials on server over a single line for optimum picture quality by priority, and it can even perform monitoring. KDDI R&D Laboratories also developed an evaluation tool offering a high correlation for the subjective appraisal of human beings as high-precision evaluation of video quality is essential for IP development. Evaluation at a similar level to that of conventional picture quality assessment is possible even with little or no experience or knowledge, by diagnosing the file before and after compression via MPEG2 or H.264 ― techniques that are expected to help enhance video quality management. Another very interesting subject was the professional-amateur automatic video detection technology that diagnoses the varying characteristics between professional and amateur videos by determining differences in the cameras used, recording techniques, and production procedures. Recordings made by visitors were rated for professionalism by scores using an original algorithm that calculates the evaluated values derived from camera operation, screen position stability, etc. An added benefit of this system is that it can be used to detect illegal content widespread over the Internet. Additionally, somewhat similar algorithm technologies of automatic video quality evaluation were also exhibited by Tektronics and Nikon Systems.
In addition to equipment manufacturers and carriers, exhibits by broadcasting concerns that can also be considered as users received significant attention. Fuji Network participated in Inter BEE for a fourth time and this year, the station presented its original developments. Fuji Network has long been dealing with migration from stream-based tape to file-based workflow and at this show, they demonstrated the MXF Cast ― an extended system that collects and distributes data between network stations. Information on the system was also reported on at the NAB-J Symposium. Other technologies on display included a FPU using 120GHz bandwidth, which was co-developed by NTT and NHK, offering a transmission speed of 11.1Gps and 6ch max. to enable multiplexing of HD video signals to be sent without delay. NHK's error correction technology is applied to cover for the high rain attenuation characteristics of 120GHz bandwidth. The FPU was also demonstrated at IBC, NAB and BIRTV, and was trial-tested at live coverage sites from the Beijing Olympics. The MXF inter-station IP transmission system co-developed with Nippon Television on display at IBE Net Time's booth makes it possible to send filed metadata of producers or time/date information, as well as proxy video to HD video via an IP line.

Reflecting the development of digital cinema worldwide, exhibits of 4K ultra high-definition-related equipment and systems as seen at NAB also increased significantly at Inter BEE.
Red Digital Cinema Camera Company, that is renowned in the U.S., is also establishing alliances in Japan. And at this event, the RED ONE ― a 4K camera that is the company's main product ― was on display at the Seika Corporation and Hibino Corporation booths. A camera loaded with stabilizer was carried by a cameraman, who walked around the booth to demonstrate its superior maneuverability and excellent picture quality. At Nobby Tech's booth, the Phantom 65 digital cinema camera with variable-speed recording (1 to 125fps) produced by Vision Research of U.S. was on display, as was a 4K camera by Olympus at the NAC booth. Concerning high-capacity recorders capable of storing digital cinema signals, products that caught my attention were a 4K-compatible uncompressed disc recorder and a lightweight recorder by Keisokugiken Corp with a 4.3-inch LCD monitor that can be camera mounted and a digital cinema uncompressed video recorder by Doremi Labs.
ASTRODESIGN had its own 4K ultra high-definition video technology corner but on the wall surface of their booth, a 4K image from JVC's D-ILA display was projected from behind the 108-inch screen by Christie Digital Systems. Breathtakingly beautiful and powerful ultra high-definition pictures captured the attention of visitors as NHK Super Hi-Vision productions such as the film titled, "Okinawa Chura-umi (Beautiful Sea of Okinawa)", which was recorded using JVC's 4K camera were shown. Inside the booth, several 4K LCD displays were on display showing ultra high-definition still pictures taken from Google Earth as well as images from a Doremi Labs video recorder that were recorded using a 4K camera by DALSA.

As with digital cinema, the latest and most important trends in video are related to 3D technology and there were a number of interesting displays that attracted many visitors.
Quantel showcased its improved stereoscopic video using a big-screen at the center theater. Next to their booth, a demonstration of a 3D production system and exhibits of two 3D cameras produced in cooperation of 3ality Digital, a 3D specialty team, were displayed. ASTRODESIGN showed a system that can display 3D images ― recorded using two ultra-compact full HD cameras ― directly onto a 3D monitor without going through a special synthesizer that synchronizes images for the left and right eyes. FA Systems (in Matsuyama City) exhibited a system that can display stereoscopic scenic video in full HD resolution. Also exhibited was a stereoscopic camera made by Canon with a 2 channel HD-SDI signal for left and right images that pass through an LR composer by NHK-MT for display on an Xpol-system LCD HD monitor. And this company performed a 3D Hi-Vision IP transmission test in the NICT booth at the past CEATEC show in collaboration with NHK-MT by sending 3D HD video data from the Dogo-onsen Spa in Matsuyama to the venue using an optical fiber giga-net line. ERG Ventures showed a simplified 3D system designed primarily for use in the medical fields in which the L/R 2-channel video signals optically divided by a compact HD camera are merged, with both left and right images displayed on a compact 6.5" LCD monitor (introduced in the previous issue on monitors) via an optical system to display stereoscopic video images.