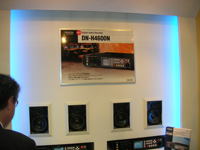 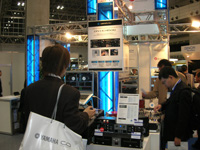 One of the main attractions at this year's Inter BEE is the dawning of the "tapeless" era for the TV industry, although the radio industry went tapeless a few years ago.

The long rows of tape recorders have disappeared from the studios, and what has appeared in their place is the Denon DN-H5600N digital audio recorder.

For those of us working in radio production this piece of equipment is already very familiar. You see it in every station you go to. And that's not surprising: apparently they've already sold 1,000 units. It's been six years since the DN-H5600N was first launched in 2001, but it still seems like a new piece of kit.

On display at this year's Inter BEE (Booth No.3106) is the Denon DN-H4600N digital audio recorder, a more affordable version of the DN-H5600N. Compared with the DN-H5600N, this model comes in a slightly slimmer (2U) size, and the panel of the black unit creates a fresh impression. Naturally it is compatible with the DN-H5600N, so the files you've already made can be used as-is.

Among the new features on this model are 4 channel inputs allowing you to record all 4 channels simultaneously, the ability to record directly to CompactFlash (CF), file transfer via network, and USB ports.
But perhaps many people will agree that the greatest attraction of all is the price - about half that of the DN-H5600N.

It is going to go on sale next month, and I suspect that already several broadcasting stations have made up their minds to install it.

But caution is needed: don't think that this DN-H4600N is a successor to the DN-H5600N. The DN-H4600N itself does feature a small monitor, so you can record, edit, and playback while watching this screen; however, since there is no controller as for the DN-H5600N, everything has to be done using the main unit. If you're thinking of editing, you'll surely find it more efficient to continue using the DN-H5600N with its large monitor. In other words, this DN-H4600N appears to have been conceived for use as a recorder and player in the studio, and as master broadcasting equipment, for stacking in a rack and taking to live shows, etc.

When using it for one-touch playback, a dedicated controller makes it possible to cue as many as 96 audio files.

Actually something else caught my attention at the same booth.

This was a handheld field recorder: the Marantz Professional Solid State Recorder, to be exact. With a compact design - measuring102mm x 62mm x 25mm the PMD620 makes it easy to capture high-quality audio recordings. You have a choice of recording formats, MP3 or WAV, and it records on SD/SDHC cards. It has been designed for one-handed operation, so you can start recording with just a press on the record button. It will operate for 5 hours with two AA batteries, and since it has a built-in condenser microphone it's easy to use when on location, for vox-pop interviews in the street, etc. Of course, you can also use an external microphone: it offers a phantom power supply.

Apparently the PMD620 is going to be launched in America this month, but it is being treated as a reference exhibit at this year's Inter BEE. No word yet on when it will be launched in Japan, but the price is likely to be between 45,000 and 50,000 yen.