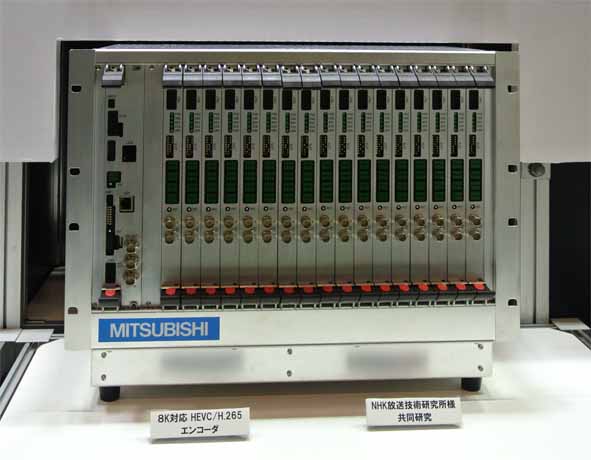 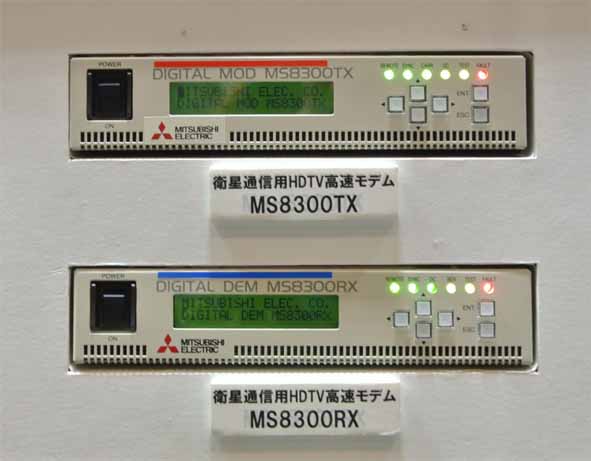 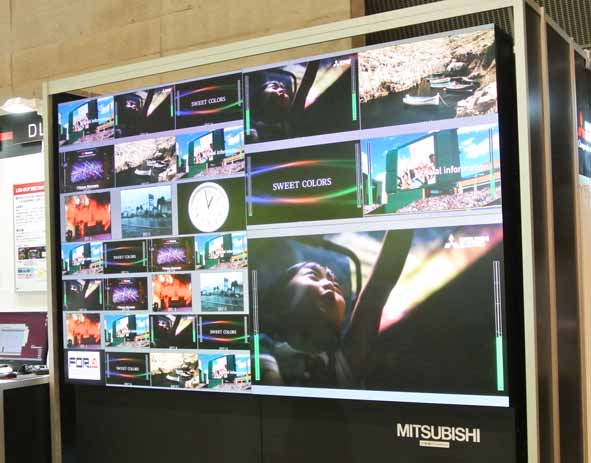 At Inter BEE 2014, Mitsubishi Electric Corporation exhibited all kinds of their latest technology including their "Semiconductor Electrical Amplifier Module" which allows for high-resolution broadcasting with low energy consumption, image processing technology that specifies filming position and the actual state of a place thanks to instantaneous parsing of footage from a helicopter, the high-resolution and high-brightness multi large-screen LED DLP-format projector, as well as their 8K HEVC encoder and HDTV high-speed modem for satellite communications.

■ 8K HEVC encoder developed with NHK able to process in real-time in a 17-partition arrangement
The 8K HEVC encoder (above) which has been developed jointly between Mitsubishi Electric Corporation and NHK is equipped with HEVC encoding and was released in May 2014. Thanks to an encoding process of partitioning the 7,680 x 4,320 pixel SHV image into 17 parts (horizontally) and arranging each area, it is capable of real-time encoding. When encoding, necessary information such as speed and direction of picture movement, is shared between each area for efficient processing. Thanks to this it has been possible to curb deterioration in links between partitions.

■ Latest HDTV high-speed modems now half the size and weight of previous models
HDTV high-speed modems for satellite communications are the latest small-size, light-weight modems. A demo was held at the exhibition hall to show the modem's modulation method and transmission filters, as well as to show off its efficiency.
Head of the department in charge of satellite communications systems, the Mitsubishi IT Universe Solutions Business Department 1, Division 3, Masato Osako said: "Due to being able to support HEVC/H.265 image encoding formats, this modem can be supported by next-gen communications within HEVC/H.265 technology. Furthermore, this modem has many good points such as being made even more compact than a 1U high half-sized rack mount, and its capability to transmit high-resolution footage with the use of its unique encoding control technology. HDTV high-speed modems for satellite communications are completely compatible with previous models of modem from Mitsubishi, and support DVB-S/DSNG/S2 standards, meaning that they can be changed over to smoothly. The weight and size of the casing has also been halved to allow for the use of these models in limited space.
"By optimizing operational frequency to a 64APSK modulation mode with 5% roll off factor the required bandwidth can be further narrowed. Thanks to this, it can be more compact, and supply more stable footage transmission than previous models," said Osako.

■ Provision of weather forecast in cooperation with the Japan Meteorological Agency
Semiconductor (GaN: Gallium Nitride) electrical amplifier modules are capable of transmitting high-resolution footage with low energy consumption due to high-output, low-distortion technology. In addition, the "Weather Forecast Automatic Transmission System", the system for creating and transmitting the weather forecast created jointly between the Japan Meteorological Agency and Mitsubishi Electric Information Systems, was also demoed. The latest weather data is incorporated onto the screen in real-time, where it is automatically sent and fitted into the fixed program screen. With a GUI base and an intuitive, easy-to-use interface, broadcasters can create their own unique screen designs, and there are plenty of commentary support functions, such as zoom, line-drawing, and watermarking available.

(*This is a report for the exhibition contents of Inter BEE 2014 that was held in Makuhari Messe from November 19th-21st, 2014)