【InterBEE 2012】Fraunhofer-Gesellschaft to demo MPEG-DASH adaptive streaming such as HE-AAC 5.1 with surround support for Android 4.1, and speaking volume optimization technology, developed in collaboration with the BBC 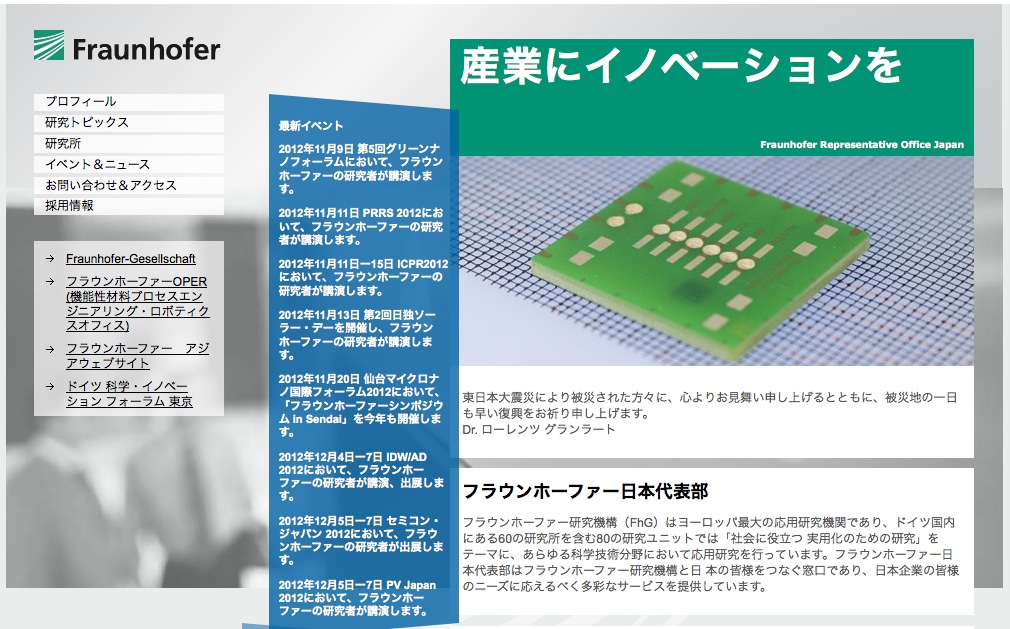 Fraunhofer-Gesellschaft is a German IT oriented private research institution composed of 80 research units, including 60 laboratories within Germany. It has a wide scope, providing various technological solutions for everything from construction to energy, security, medical, environmental, nanotechnology, and even transportation and logistics. It also has a developing licensing business. The uniqueness of Fraunhofer-Gesellschaft is that it enjoys flexible collaborations with private sector institutions such as businesses and schools, as well as other research institutions, and through this is able to offer industry a number of concrete solutions.
Fraunhofer-Gesellschaft's developments in audio and video technology such as encoding and 3D measurement have a history of being adopted as international standards and commercialized in the fields of information, communication, and especially digital media.
At this year's InterBee, Fraunhour IIS, a division of the research institute, will have its own professional audio booth. In addition to the company's state-of-the-art technology showcase demo concerning specifications for the extension of the MPEG-4 AAC international standardized method for audio compression encoding, referred to as multi-channel HE-ACC and also known as truetone. The division plans to demonstrate its latest audio technology experiment at Wimbledon of high quality, multi-channel MPEG audio at a low bit rate, using audio mixing techniques developed in collaboration with BBC.

■ HE-AAC Mutlichannel adopted as a standard feature in Android 4.1
HE-ACC multichannel audio has been adopted as a standard feature in Android 4.1. Smartphones and tablets with Android 4.1 will be able to playback 5.1 surround sound content through HDMI and MHL hookup with home theater systems. Furthermore, Android devices will become a distribution platform in combination with MPEG-DASH adaptive techniques such as HTTP streaming. Content providers will be able to easily provide content of the highest quality and effectiveness currently available in the MPEG standard.
HE-AAC is included in the new FDK AAC library from Fraunhour. This FDK will be loaded with Android 4.1 and can implement the institute's AAC, HE-AAC, HE-AACv2, and AAC-ELD audio codecs.

■MPEG-DASH adaptive streaming using multichannel HE-AAC
Fraunhour will demonstrate how HE-AAC multichannel can be implemented from stable 24kbp/s stereo to the best possible surround sound quality 160kpb/s DASH stream.
In addition to the unique coding efficiency, the AAC codec has the ability to dynamically and seamlessly adapt the bit rate to changes in line speed.
The ubiquity, efficiency, metadata support, and seamless voice switching function of AAC have become indispensable for the rapid expansion of MPEG-DASH and internet streaming.

■Extended HE-AAC (xHE-ACC), the world's most powerful audio codec
'Extended HE-AAC' is the latest upgrade in the AAC audio codec series. This codec achieves significant improvement to the 8-64kbp/s while maintaining compatibility with the existing HE-AAC codec. Music distribution and satellite broadcast over wireless networks are cited as its target applications.
The sound quality of xHE-AAC can be heard at the InterBEE booth through the installed broadcast simulation with playback through android smartphones. Talk radio, music programs, and jingles can all be distributed consistently at a high quality with a low bit rate.

■Dialogue Enhancement: Viewers can adjust the 'conversation' and 'environmental background' volume balance of broadcast programs.
The balance between conversation and environmental noise in TV and radio audio mixing has become a major issue. In order to solve this problem, Fraunhofer conducted research in collaboration with BBC and has developed this latest audio technology. This new technology was put to the test at the Wimbledon tennis tournament. The experiment demonstrated that it is possible to freely adjust the sound balance and increase the sharpness of conversation. This technology allows the viewers themselves to adjust the conversation and environmental audio according to their preference.
A demonstration of the ability to improve conversation sharpness as the tennis match is broadcast will be held at InterBEE. It is possible to adjust the sound mix from the loud sounds of the court and live audience and quiet sounds of the commentary, in order to make the commentary clearer while muffling the noise of the game. This technology is compatible with mono and stereo equipment.

[InterBEE 2012]
Inter BEE is a convention for audio, video and communications professionals—it gathers top-of-the-line broadcast, video, music and lighting equipment, IPTVs, mobile TVs, cross-media and peripheral applications and solutions all under one roof. Relevant to all involved in media, it provides an opportunity to learn about the latest trends in the creative and media businesses.