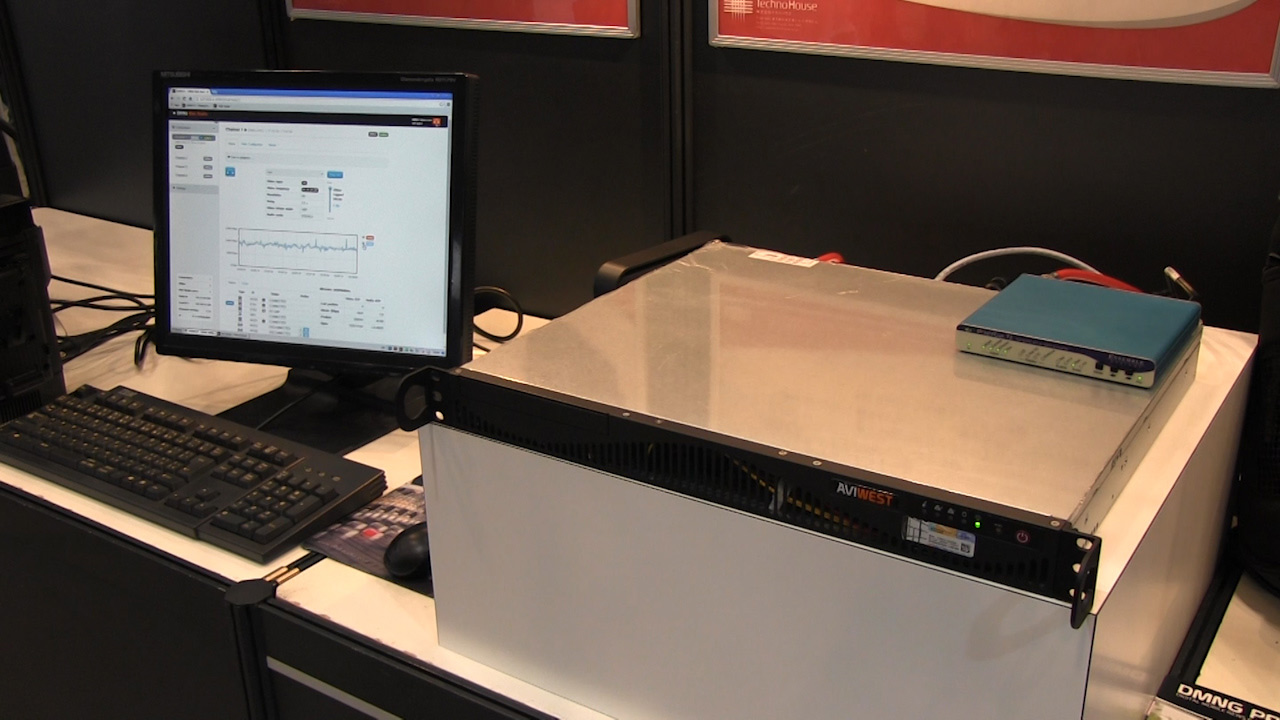 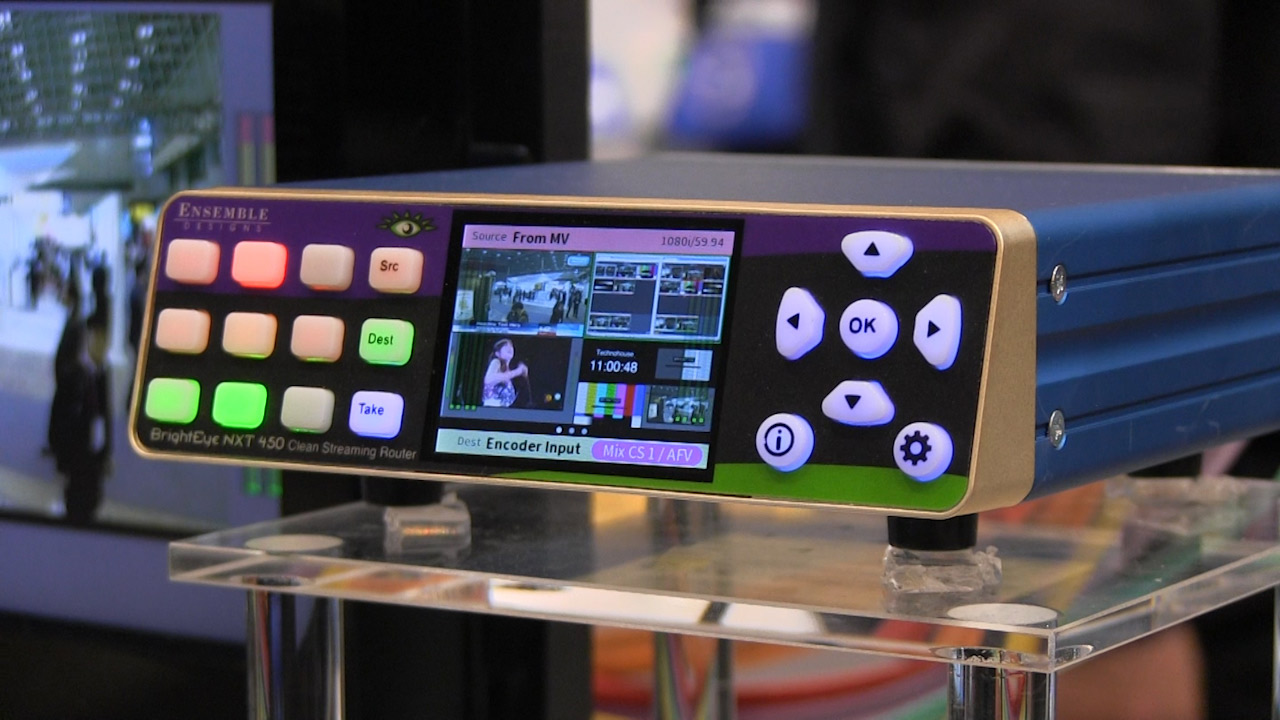 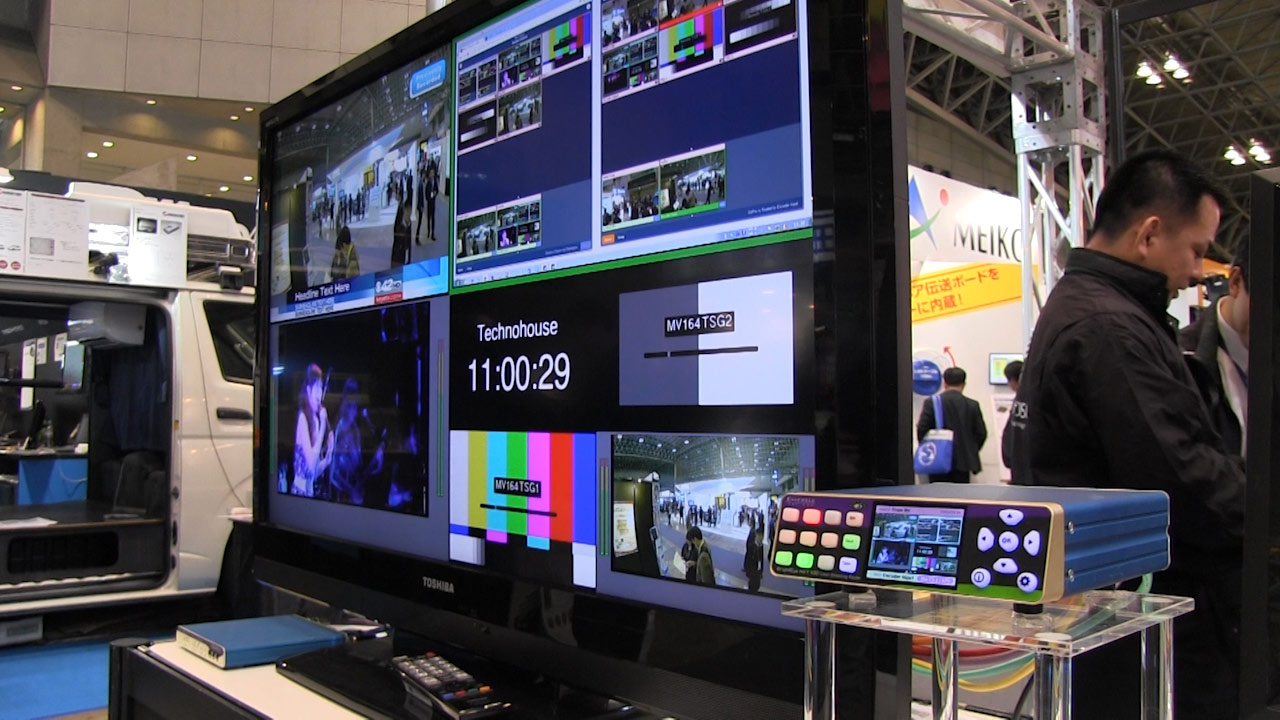 Technohouse exhibited at InterBEE 2014, held at Makuhari Messe, for 3 days between November 19th and 20th, 2014. They exhibited their “BrightEye NXT450” compact switcher, which was announced at this year’s IBC, equipped with a H.264 encoder/decoder designed by EnsembleDesigns, and ConvergentDesign’s 4K RAW data recording capable “Odyssey 7Q” 7.7 inch field recording monitor. Further, they provided a demonstration of AVIWEST’s 3G/4G-LTE live transmission system which they only began to carry this year. Separated into transmitters and receivers, it can be installed on a camera. The receiver can be connected to up to 4 transmitters so as to allow management of all the transmitted data at one place; it can also be controlled remotely.

- Hybrid Transmission Use Proposed
Announced at this year’s IBC, EnsembleDesign’s “BrightEye NXT 450” is a compact switcher capable of switching HD/SD/3G-SDI and DVB-ASI. Its features include a high degree of portability (about 1/3 of 1U size), the inclusion of a H.264 encoder and decoder, the ability to unicast or multicast encoded video, and the ability to output individually via DVB-ASI. Furthermore, if the NTX450 is available both on location and at the remote studio, switching between multiple cameras and hybrid transmission between two locations is possible. Supported bitrates are 1 Mbps-20 Mbps. Upconversion and downconversion from SD to HD and from HD to 1080P 3G are possible.

In the booth, video captured by a camera was transmitted via unicast, and this was then received, decoded and converted into multi-view by the NXT450 opposite. The video was then encoded by the NTX450, and sent to the NTX450 at the camera in a demonstration of hybrid transmission. The price for the pair is 1,020,000 yen.

ConvergentDesign’s field recording monitor “Odyssey 7Q” capable of recording 4K RAW to SSD is a necessity for recording digital cinema on-location; it is a monitoring recorder with both a high quality recorder and a superior quality portable monitor. In addition to the 7.7 inch (1280x800) organic EL panel, there are two SSD devices for recording. The latest version of the firmware released in October, V3.10.100, supports K ProRes recording.

At the booth, a Panasonic “LUMIX DMC-GH4” digital camera was connected to an interface unit, from which 4 3G-SDI’s were used to connect to the “Odyssey7Q” field monitor; a demonstration was performed of the monitor’s usage and of a filming solution at a ProRes 4K30p recording capable fold.

Many options are available for recording, FS700, HD/2K RAW, Canon C500 RAW, or Alexa ARRI Raw. This time, as there were four SDI4 units, 4K recording was possible, but “Cameras other than these can be used”. Further, it was stated that 60 consecutive frames per second CinemaDNG recording would be possible at 4K RAW. Combined with the Canon C500, 4K RAW was possible at 4096x2160 and 3840x2160, with consecutive RMF recording at 60 frames per second.