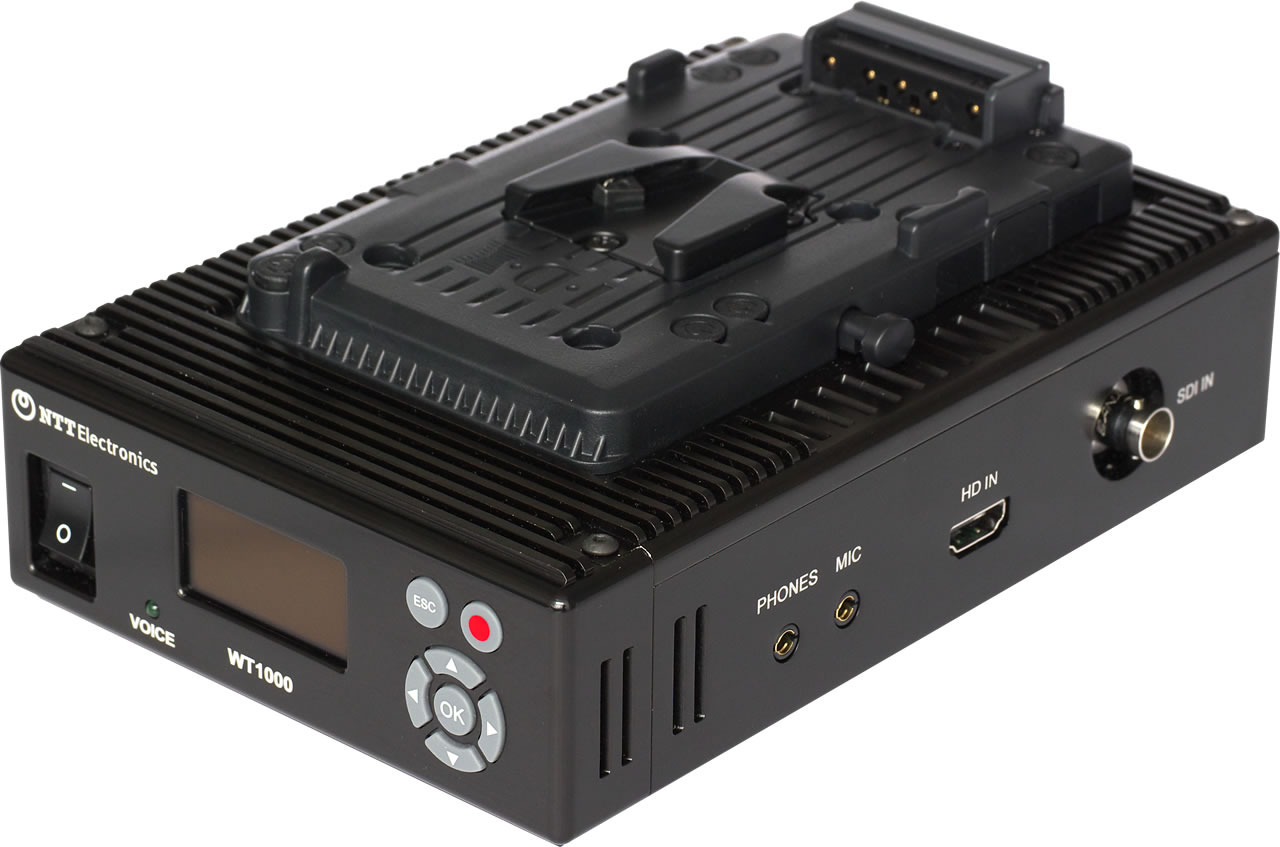 NTT Electronics (headquartered in Yokohama, Kanagawa Prefecture) exhibited at the Inter BEE 2014, held November 19-21 at Makuhari Messe. At their company booth (booth number 5405), they introduced their next generation IP image transmission solution, HEVC solution, and the provided demonstrations of the image transmission solution on a monitor display. The "NA800," IP gateway equipment utilizing FireFort(r)-LDGM FEC (see photo above) and the HEVC real time encoder "HVX750" were being shown within Japan for the first time.

- The image transmission IP gateway equipment utilizing FireFort(r)-LDGM FEC, known as "NA8000," was shown in Japan for the first time
The IP gateway "NA800," which was exhibited at the IBC 2014 and was nominated for the IABM Innovation Award, was shown for the first time in Japan here. The "NA800" is an image transmission IP gateway with an excellent error correction algorithm known as a LDGM (Low Density Generator Matrix). This LDGM will become the international standard for MPEG-H and ISO/IEC23008-10. The technology development and standardization was undertaken at the NTT Network Innovation Laboratories and makes both wired and wireless reliable and robust image transmission possible. At the booth, a comparison of ProMPEG FEC and ForeFort-LDVX570" HEVC realtime transcoder was revealed for the first time in Japan.
The HVX750 is a media transcoder that takes a single input image source and converts into multiple streaming formats, including for TV, smartphones, and tablets, the flagship model for which is the "HVX5000." At 1U size, it can AVC/H.264 transcode up to 7 HD channels. It features a software engine for the next generation compression technology, HEVC/H.265, which was developed by NTT-AT, and it also has functions to encode/transcode high quality images in full HD HEVC/H.265 in real time and to transcode 4K HEVC/H.265 offline. The streaming formats it supports include HLS, RTMP, Smooth Streaming, and MPEG-DASH. The "HVX750" will be available from January 2015. At the booth, realtime encoding of HEVC to 2K and multi-channel and multi-bitrate were demonstrated.

- AVC/H.246 encoder/decoder "MVE5000/MVD5000" was exhibited
The "MVE5000/MVD5000" is a small AVC/H.264 codec system capable of low rate, high quality media transmission. It now includes functions that allow it to transmit an IP stream over two different IP network routes at the same time, so if packet loss occurs over one line, the lost packets can be recovered from the other line immediately. It also supports ARQ (Auto Repeat Request) which enables high reliability in IP transmission. At the booth, they combined it with devices from other companies and demonstrated the monitor awareness, and like last year they also did a demo of IP packet loss.

- Exhibition of the mobile encoder "WT1000"
"WT1000" is a mobile encoder that can utilize up to 6 lines simultaneously to easily transmit high quality HD live broadcasts via mobile data such as LTE, WiMAX, and 3G. Its unique characteristic is its small, light form and the long battery life, so its portability is not limited to wired environments, giving users a high degree of freedom in recording and broadcasting. At the booth, image data from a camera was encoded with the "WT1000" and that image data was transmitted via wifi.

- Main Exhibit Contents
Including the above mentioned technologies, the following were the main products being exhibited at the NTT Electronics booth.