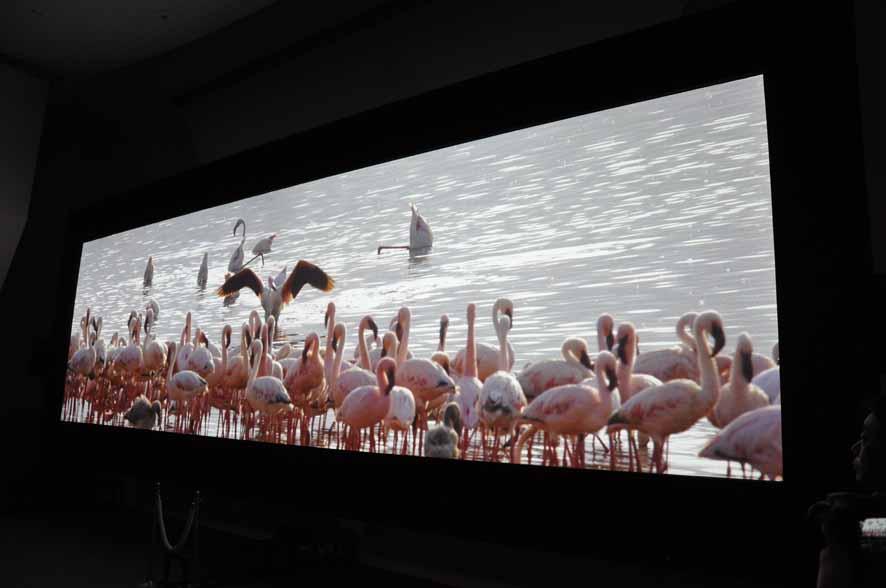 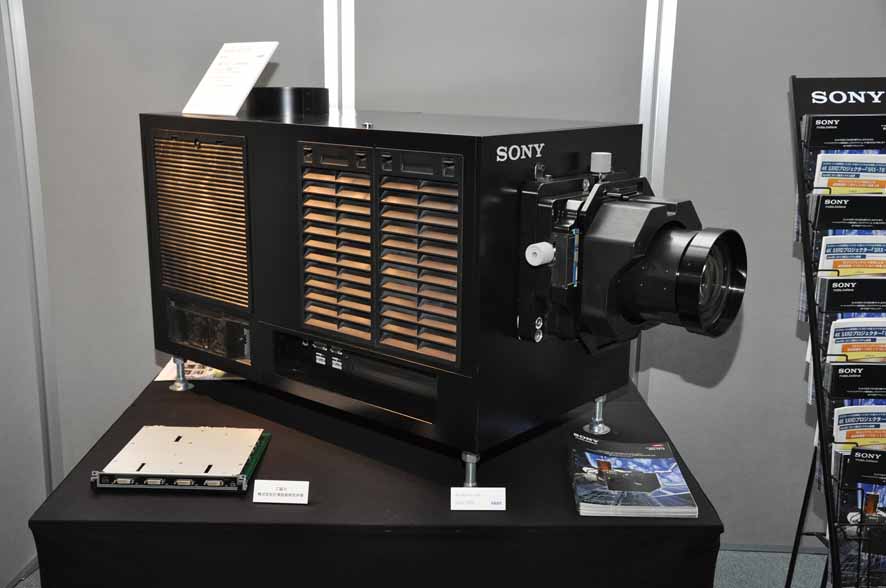 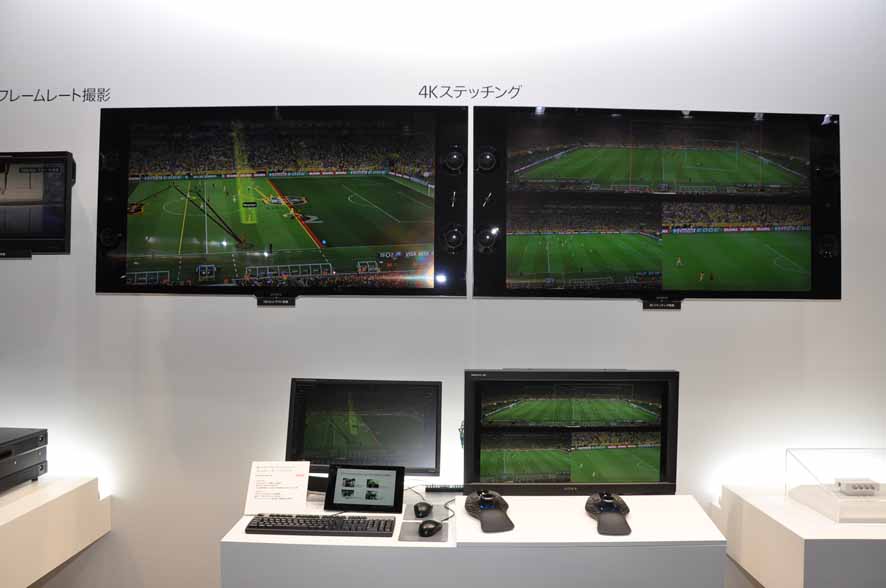 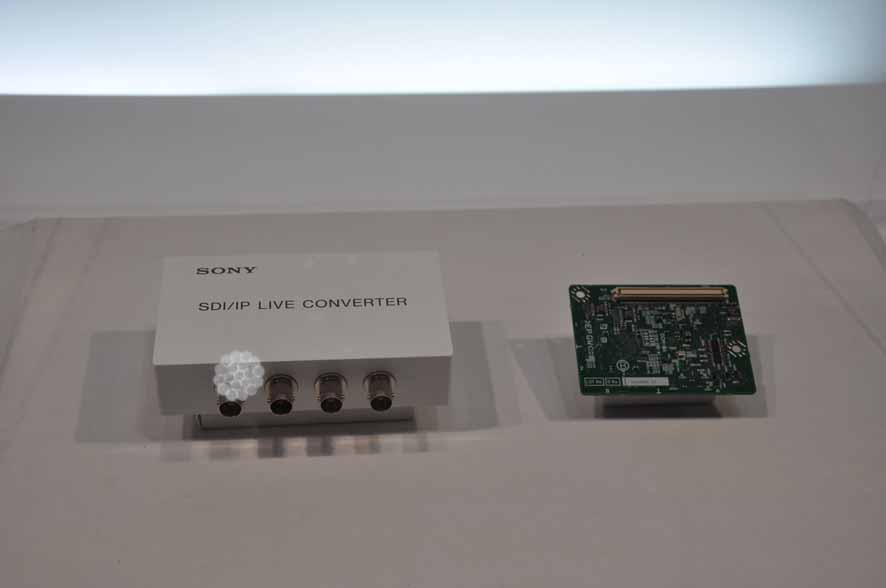 Reference display of an SDI/IP converter

Sony held a press conference at 'Inter BEE 2013', held at Makuhari Messe on November 13, to introduce new industrial-use 4K products and trends, their efforts in the domestic broadcasting equipment business, and more under their concept of “Beyond Definition: Evolve, Create, Challenge.”
Beginning in December, they will be selling new products, such as their 4K live camera system, which makes 4K live broadcasting possible with the PMW-F55 4K live camera that they already have on sale as part of their 4K live creation solutions for 4K live broadcasting of sports, etc. They will also be selling their 4K live server system, which is focused around their PWS-4400 multiport AV storage unit for recording HD/4Kx4ch compatible XAVC format content. In addition, starting in January 2014, they will be selling their BZS-8570X and BZS-7570X 4K upgraded software for use with their MVS-8000X and MVS-7000X multi-production switchers that make 4K live creation possible. Also in January, they will be selling their lightest new model PVM-A250 TRIMESTER EL 25-inch organic EL monitor, which has a wider field of view and is 40% lighter than traditional models, and the PVM-A170 17-inch organic EL monitor.

■ The 2020 Tokyo Olympics are expected to stimulate the evolution of Japanese broadcasting.
Executive officer Mr. Shoji Nemoto, head of Sony’s EVP professional solutions department, was first to take the podium, and stated: “The 2020 Olympics/Paralympics will be held in Japan, and I strongly expect that this will provide a big stimulus for the evolution of Japanese broadcasting. As was once the case with the creation of HD televisions, the world has once again brought serious attention to the trends in Japanese broadcasting and video creation. It is now again time to show how we will realize new technologies. I believe that this year’s Inter BEE is the beginning of the change towards a new era.

■ Currently developing a system that can apply 4K technology to sports live broadcasting technology. Product to be commercialized in the near future.
The next person to speak was executive officer Mr. Toshihiko Onishi, second in charge at Sony’s professional solutions department, who gave an explanation concerning their developmental efforts.
Sony, under their Beyond Definition concept, has proposed a new workflow in order to provide high additional value represented by high screen quality, as well as to increase work productivity by connecting all workflows of a business to stay in-tune with the world’s changes.
They conducted an inspection of their 4K production workflow used in the world’s first usage of a 4K camera for a live broadcast at the 9th FIFI Confederations Cup held in Brazil this year in June. Mr. Onishi explained that “based on the results of this trial, we are currently developing a system that can apply 4K technology to live sports broadcasts, and will soon be commercializing this product.”


■ 4K broadcasts and video content are to be used for the 2014 FIFA World Cup Final in Brazil
In addition, it has been decided that 4K broadcasts and video content creations will be used for the final match at the 2014 FIFA World Cup in Brazil. Mr. Onishi stated that “we plan on cooperating with our consumer team to support the ability of a wide variety of people in different countries to view the content in some way with back-ups starting from the creation stage to creating environments where people can view from home or in public places."

■ Introduction of 4K stitching technology and 8Kx4K display as examples of 4K video creation
As one example of the added value of 4K video for high-quality video content, they proposed a new type of video display, which displays 7680x2160 pixels on one screen by lining up two 4K cameras. They held a demonstration where they projected ultra high-resolution (7680x2160 pixels) by lining up two of their SRX-T615 4K SXRD projectors, which they plan to start selling in November. The high contrast and picture quality, even brightness, and high-resolution from corner to corner make the product’s high quality edge blending possible.

In addition, in terms of the practical application of 4K video creation, they are still in the testing stage, but they have developed a 4K switching technology that cuts out full HD video from any part of an entire shot taken of a whole field using two 4K cameras, and are conducting field tests in which they use the cameras for real broadcasts. Moreover, they plan on providing their PWA-TSI telestrator software, which can add graphics including player data to cut-out HD video, as well as the 4K stitching software, PWA-4KS, to Europe and the U.S. beginning in December.


■ Proposal for workflow optimization
With regards to workflow optimization, Mr. Toshihiko Onishi stated that “over 300,000 XDCAMs, which use optical discs developed by Sony, are used throughout the world, and based on this we provide over 50 types of IT-enabled workflow solutions that aim to make equipping your station as easy as possible.” In addition, regarding broadcasting station internal infrastructure, in which SDI and HD-SDI technologies are currently utilized, as 4 to 8 cables are necessary for handling 4K content with HD-SDI technology, they have also proposed an IP live solution that replaces multiple SDI cables with one ethernet cable for use in the handling of 4K content with HD-SDI. They are developing an IP live transmission system, the NXL-IP55, as a product made compatible with their IP live solution. Furthermore, they are currently developing a real-time IP production technology that can simultaneously transmit and switch between HD, 4K, and other video/audio signals, as well as control signals on one network, and they displayed their SDI/IP converter as an example of this. Sony is aiming to sell these products beginning in the 2014 fiscal year, including their IP interface module, which is small-sized, light-weight, and can be internally equipped with a variety of components.

Lastly, Mr. Shinji Hanatani, executive office at Sony and director of their Sony Business Solutions department, took to the podium. He gave his explanation of the domestic broadcasting equipment business, including his ideas on the high added value, workflow optimization through file based operations, high functionality in presentation of live broadcasts, and more that Sony is striving for.
Mr. Shinji Hanatani stated regarding the development of 4K and 8K technology that: “I truly feel that the fact that Tokyo was able to claim the 2020 Olympics has strongly pushed forward this industry. Also, because the data on which Japan completed the switch over to digital broadcasts, and the date on which the Tokyo Olympics will begin in 2020, both fell on July 24th, the date of July 24th has become a key word for digital broadcasters. He also explained that “for 4K, new presentation methods, and not just specs, have become important.”

Sony has put out a variety of new products used in all sectors of the industry, from recording to transmission and viewing. Video creation using their cameras has already begun, and 4K video has been adopted in many new fields within Japan as well, including for movies, dramas, and sports. There is particular focus on 4K for use in live sports broadcasts, and broadcasts using 4K cameras have already happened for golf, baseball, soccer, and other sports’ broadcasts.


■ Commercialization of a camera for live sports broadcasts that is compatible with 2X and 4X slow-motion
In addition, as Mr. Shinji Hanatani explained, “we believe that, with regards to presentation and creation methods, this camera will make possible not only switching between multiple 4K video cameras, but also the cutting out of HD video from 4K video, zooming and panning within 4K+4K video, and other new methods of presentation.”
Furthermore, at the Ministry of Internal Affairs and Communication’s NexTV-F forum, which is planned by Sony, they have cooperated in the development of systems aimed at making 4K broadcasts a reality, have provided equipment, such as 4K compatible broadcast systems and XAVC servers that can record 4K video, as well as other services, and they plan to cooperate with Japan’s SKY PerfecTV service going forward.
Furthermore, with regards to live solutions, they have commercialized their HDC-200 series, which is compatible with multi-format, both HD/4K and live solutions can achieve 2X slow-motion for use in live sports broadcasts, as well as their PMW-F55 camera, which can achieve 4X slow-motion.

■ Development of the CBK-WA100 wireless adapter that allows you to input meta-data from tablets and smart phones and transmit video files taken at live venues
With regards to archiving, they provide a total file base solution that spans from recording to archiving and from the broadcasting field to the field of TV show creation. However, they have now created the CBK-WA100 wireless adapter, which allows you to input tablet and smart phone meta-data used to search for filming data, actors, equipment types, etc., and transmit video content taken at the live venue. In this way, as Mr. Shinji Hanatani explains: “We have created a product which allows you to easily input meta-data upstream, allowing you to smoothly search for content even after entry into the server.”